Perth-Phuket is Skyscanner “Unserved Route of the Week” with 250,000 searches in 2015; one for Qantas family? 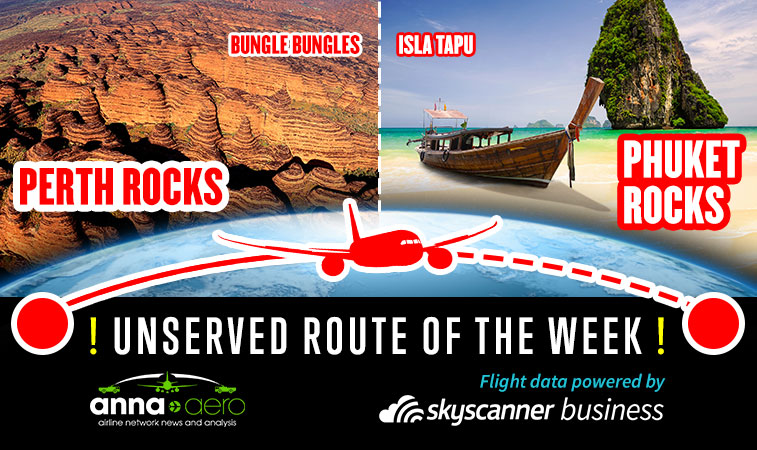 It’s a ripper! Nearly a quarter of a million travel-loving Western Australians searched Skyscanner last year in the hope of flying Perth-Phuket. This is an obvious route for either Qantas or its low cost subsidiary, Jetstar Airways, using its shiny new 787s.

With nearly 250,000 searches by travel-loving Aussies last year, a potential new route from Perth to Phuket has been identified as this week’s Skyscanner for Business-anna.aero “Unserved Route of Week” – a powerful new kind of analysis based on aspirational data captured from the Skyscanner.net flight comparison site used by +50 million unique visitors per month. 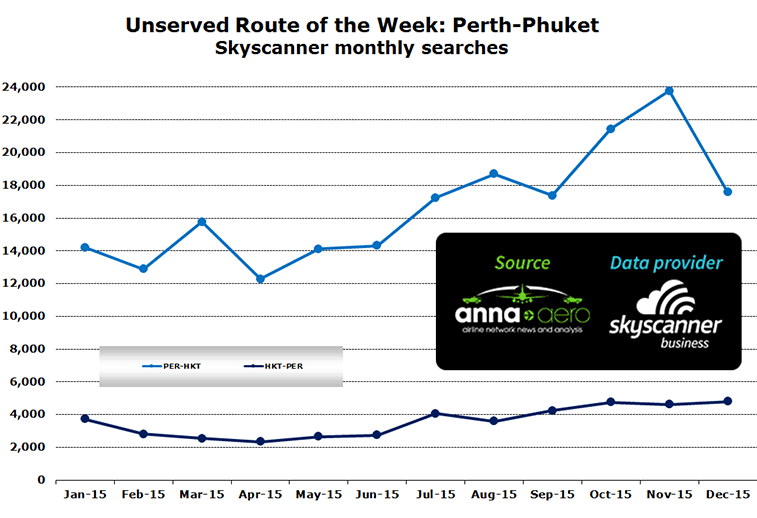 anna.aero recommends the new route to Qantas or Jetstar

Unsurprisingly, with significantly more traffic originating from the Australian end (an 82/18 split), this route looks like an obvious candidate for Qantas, the largest carrier at Perth. According to OAG schedules data for the week commencing 12 April, Qantas currently provides a network of 17 city pairs – but not this hugely-demanded destination! The airline also already operates A330-200s from Perth which, given the 4,813-kilometre sector length to Phuket, would also be an obvious choice of aircraft.

However, Perth-Phuket would probably be more appealing to Qantas family member Jetstar Airways as it already serves Phuket from Sydney (five times weekly) and Melbourne (four times weekly), utilising its 787 fleet, an aircraft which it does not operate from Perth at this time. Indeed, Jetstar only flies to one international destination from Perth at the moment – Denpasar – which at 2,580 kilometres is not even the longest route it flies from Perth (that’s the 3,616-kilometre domestic sector to Gold Coast).

At the Thai end of the route, Phuket’s biggest operator (in terms of weekly seats) is Thai AirAsia. Its six destination network from Phuket is evenly split between domestic (Bangkok Don Mueang, Chiang Mai and Udon Thani) and international (Singapore, Hong Kong and Wuhan). The Chinese route is currently the airline’s longest operation, at 3,013 kilometres. Given the need for long-haul kit on the potential route, AirAsia’s subsidiary, Thai AirAsia X, an operator of A330 equipment, would be an option, however it does not presently operate any flights from Phuket.

When looking at the last year of searches, the busiest month for potential traffic flows (for both directions on the route combined) is November 2015 with over 28,000 searches, nearly 14,000 more than the lowest monthly figure, which was recorded in April 2015 (15,000). The seasonality profile of this search data is slightly less extreme than last week’s Unserved Route of the Week (Prague to Florence), with the low-month traffic representing 52% of the highest month. According to OAG Traffic Analyser, because there is no direct service, the top three connecting options chosen by those passengers who did book travel between Perth and Phuket in 2015 were Singapore (57%), Bangkok (30%) and Kuala Lumpur (13%).

An O&D that is not served by a non-stop flight will typically display a low purchase rate and low traffic. In this instance Skyscanner’s Travel Insight indicates a monthly average of just 11.3% for the Perth to Phuket route (see graph below). Therefore, if there was a Perth to Phuket route, and if bookings performed in line with the “Skyscanner market average” for direct services at both airports (11.9%), the airline operating this route could immediately expect an improved purchase rate of 5% without any increased marketing spend. However, with nearly 250,000 annual searches, the potential city pair should already be very sustainable. 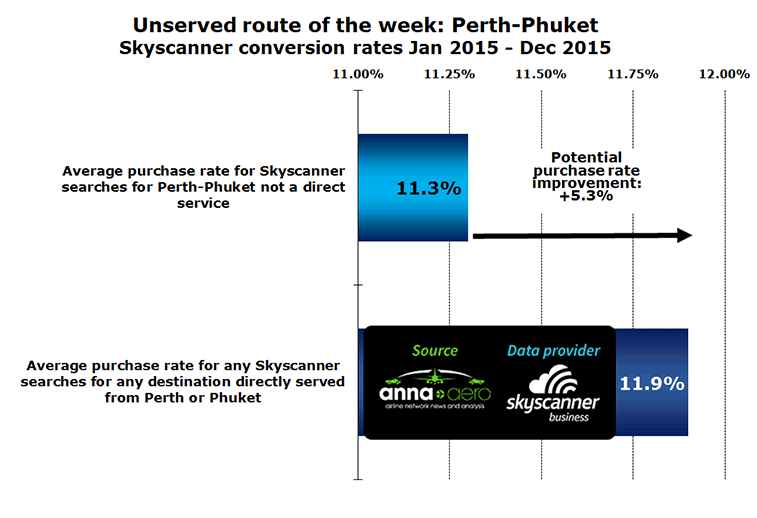