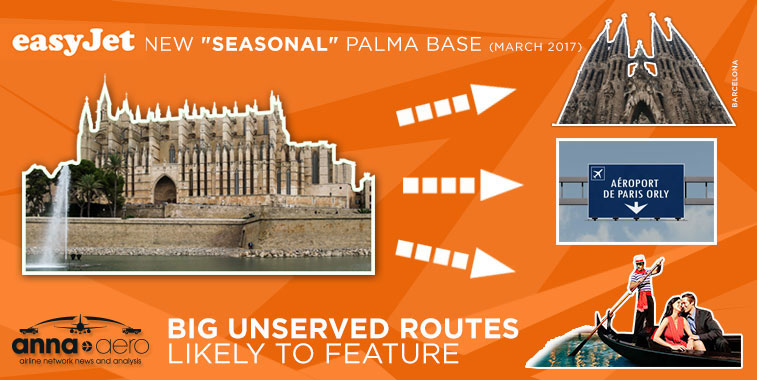 Network planning made “easy.” It’s pretty obvious which are the biggest unserved destinations that easyJet will want to serve from Palma when the three-aircraft base opens in March 2017.

Palma de Mallorca has been unveiled as easyJet’s first ever seasonal base starting in March 2017. The LCC has announced that three aircraft will be based at the Spanish airport from March to October. Last year, according to Aena statistics, easyJet was the fourth biggest airline at the airport handling 1.66 million passengers. Not as many as airberlin (5.40 million), Ryanair (3.28 million) or Air Europa (1.90 million), but more than Vueling (1.59 million). This summer easyJet will serve Palma de Mallorca from 22 of its bases. In addition, it has in the past served the airport from Dortmund, Doncaster Sheffield, East Midlands, Madrid and Rome Fiumicino. The years when these routes were first launched is summarised in the following table.

According to analysis of OAG Schedules Analyser data Palma de Mallorca was easyJet’s 28th biggest airport in 2015 based on aircraft departures. With 5,477 departing flights last year, the Spanish airport ranked just behind Copenhagen and ahead of Venice Marco Polo.

Passenger figures from Aena reveal that easyJet carried twice as many passengers at the airport in 2015 as it did in 2004. Between 2008 and 2011 passenger demand remained virtually unchanged, but in three of the last four years easyJet has seen passenger numbers increase by at least 6%. 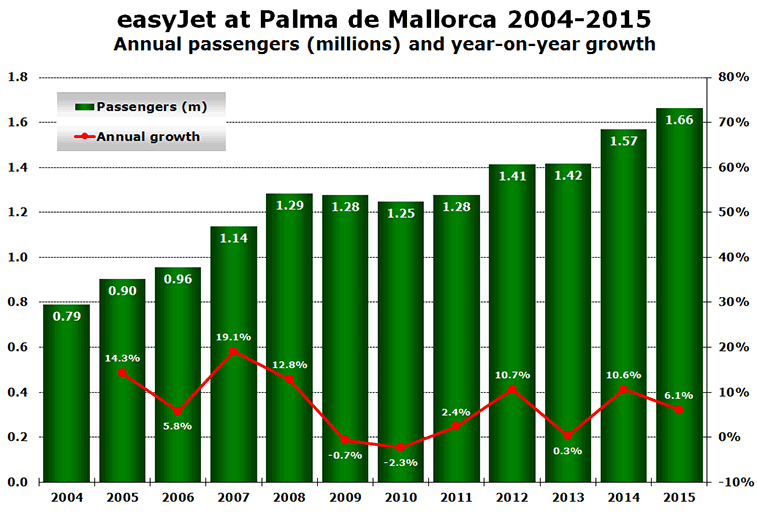