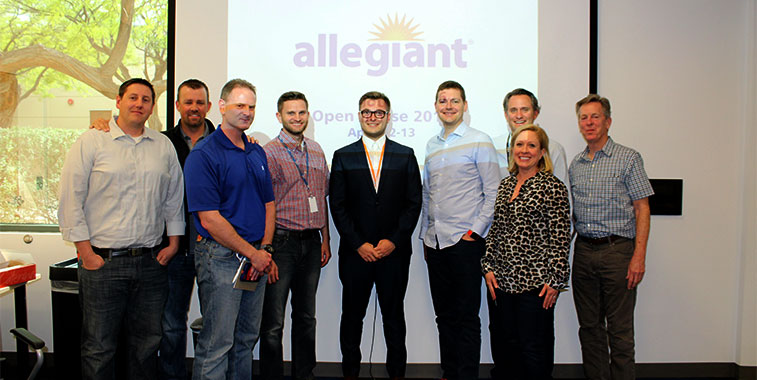 On 13 April Allegiant Air held its inaugural open media day at its headquarters in Summerlin, a suburb in the western part of Las Vegas. During a conversation a few weeks previous, anna.aero’s Jonathan Ford was invited to attend the event by the carrier’s Public Relations Manager Kimberly Schaefer. Of course anna.aero’s roving reporter kindly accepted the offer and was soon on his way to the airline’s Las Vegas headquarters. During the event, the carrier showed media representatives around its new training facility which is located within the Spring Valley district of Las Vegas. The multimillion-dollar, 17,500-square-foot centre is home to eight classrooms which can accommodate up to 246 students at a time. It houses two A320, one 757 and two MD-80 simulators, with media representatives getting a chance to have a go in one of the A320 simulators. Once the tour of the training centre had been completed, it was then time to head to the airline’s headquarters to see behind the scenes of the carrier’s day-to-day operations including a visit to the airline’s marketing and operations departments. After the tour, it was then time to hear from various heads of departments about how Allegiant Air is evolving and gearing up for future growth.

First the media were shown around the carrier’s crew training facility, situated in the Spring Valley district of Las Vegas. First on the agenda was the emergency evacuation procedures of an A320, of which Allegiant currently has 27. The A320 family is the aircraft that the ULCC is replacing its current MD-80 and 757-200 fleets with. By 2018, the carrier will have 50 A320 family aircraft in its fleet made up of 30 A319s and 20 A320s.

Once emergency evacuation procedures of an A320 had been carried out, it was then time for media representatives to try it for real in the airline’s MD-80 cabin simulator. The simulator is fitted with the latest technology and includes hydraulic pumps to simulate severe turbulence. Guests also experienced what happens when an aircraft fills up with smoke and how to evacuate an MD-80 through its rear door.

Once the cabin evacuation drill had been undertaken, the assembled media representatives were then given the opportunity to become pilots and try out one of Allegiant Air’s A320 simulators. First to have a go in the hot seat was Ghim-Lay Yeo, Deputy Editor – Air Transport, Flightglobal, who flew a lap around Las Vegas’ strip. Second to take control of the simulator was anna.aero’s Jonathan Ford who can confirm that he managed to land on Las Vegas’ McCarren Airport’s runway 01 first time around.

Once the media had visited the airline’s crew training centre, it was then time to head to the company’s head offices situated in the western suburbs of Las Vegas. One of the first stops on the headquarters tour was the marketing department. Brian Davis, VP of Marketing showcased the airline’s unique social media screen which allows staff member’s to see how the carrier is trending on social media and how good or bad the story is. As can be seen at the time of this photo being taken, the big green circles show that the airline was indeed trending well on the media platform. 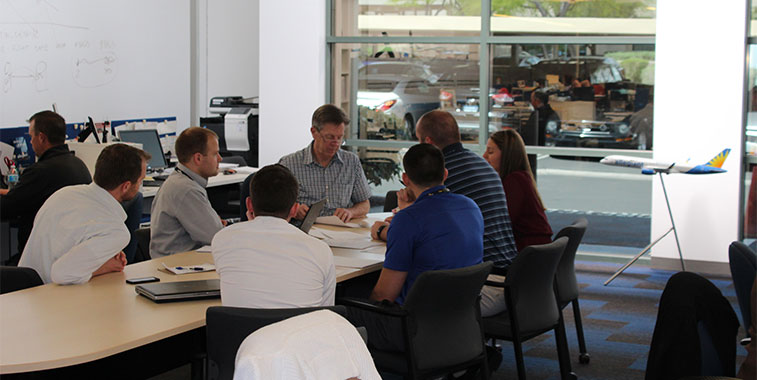 Deep discussions taking place. While on a tour of the head offices, media managed to catch a moment where Maury Gallagher, CEO of Allegiant Air, was chairing what is believed to be an airline finance meeting. The carrier has a very open office policy, with even the CEO sharing an open office with many of the carrier’s senior management. 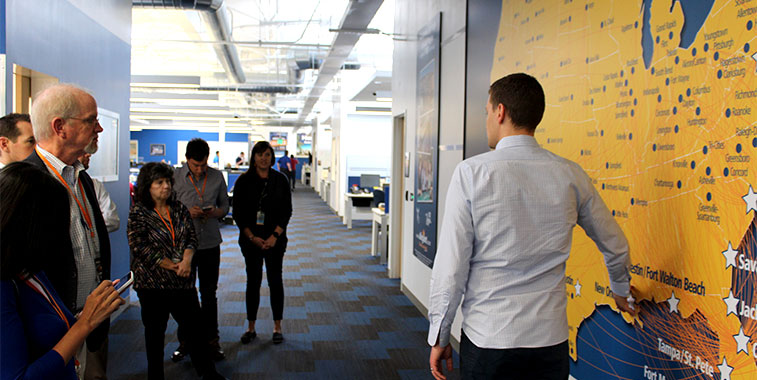 Brian Davis VP of Marketing also showed the gathered media the well-developed Allegiant Air route map. From July 2016, the carrier will fly to 113 US airports in 42 states, with a total of 333 non-stop routes. This means that Allegiant Air will be the fifth largest carrier in terms of US domestic routes served and also the fourth largest carrier in regards to US airports served after American Airlines, United Airlines and Delta Air Lines. This year the carrier will have started 69 new routes with over 100 routes added since 2014.

The first of the afternoon’s presentations was conducted by Campbell-Hill Aviation Group’s SVP Kevin Healy and VP Howard Mann who highlighted the airline’s economic impact in the US. The privately-owned US consulting firm showed that all of the airports served by Allegiant Air covers 77% of the US population (based on 100-mile radius to each airport). One of the key highlights however was that the ULCC creates $11.2 billion in annual economic benefit across the US. Another was that 65% of Allegiant Air’s passengers are from medium to small markets, compared to traditional carriers, which usually have an average of 30% from the same sized market.

The next presentation of the day was given by Tom Doxey, VP of Fleet & Corporate Finance. Currently the carrier is phasing out of its MD-80 and 757-200 fleets, with the airline looking towards an all-A320 family fleet by 2020. So far the airline has 11 A319s and 16 A320s. It currently has commitments for 23 additional aircraft by 2018, which is split into 19 A319s and four A320s. easyJet will be the largest aircraft supplier to Allegiant Air. The ULCC will be operating 22 of the European carrier’s past A319 fleet by 2018. By this time, all of its 757s will have been retired, while it is hoped all MD-80s will have left the fleet by 2020. Doxey pointed out that the big change for 2016 is that more than half of Allegiant Air’s passengers this year will travel on its Airbus fleet, with this figure rising to nearly 80% in 2020. Another feature of Doxey’s presentation was the seasonality profile of the airline’s fleet. In July, the carrier’s fleet utilisation is around 7.5 hours per day, up from around six hours in 2013. However during September, the airline’s quietest operating month, the average flying time for an aircraft is four hours per day.

The third speaker of the afternoon was Eric Gust, the airline’s VP of Operations. Gust highlighted to guests that the airline’s new training facility is made up of two A320 simulators, one 757 and two MD-80s. He also showed how the carrier was going beyond its expected requirements for the FAA by implementing all seven of the FAA’s voluntary safety programs. Gust also explained the airline’s risk assessment procedures which include what the carrier does in regards to serving a new airport. “If an airport is new to the network, we will invest in simulator software so that pilots can train to operate from that facility as much as possible before it is launched,” Gust added.

The final presentation of the media open house session was given by Brian Davis VP of Marketing and Sales. Davis highlighted that one of the main focuses for the carrier at the moment was getting to know the airline’s changing customer demographic. Currently around 80% of the airline’s bookings are by middle-aged women, which is correlated to the airline’s demographic of once-a-year family holiday travellers. He also highlighted that the carrier is starting to see increases in older passengers who were travelling more often than once per year. The fastest growing market for the airline however is VFR traffic, which now makes up 15% of the carrier’s overall passenger demographic. Davis also showed the airline’s commitment to improving customer service which includes a more streamlined website which is more efficient and allows customers to do more online, meaning that less people are required to ring up the airline’s call centre. Other highlights included the customer care team being increased by 22%. In September the airline will launch the Allegiant World MasterCard which the carrier states is the world’s first “Un-Frequent-Flyer” program. It is in corporation with Bank of America so customers can earn points for travel while carrying out basic day-to-day transactions. 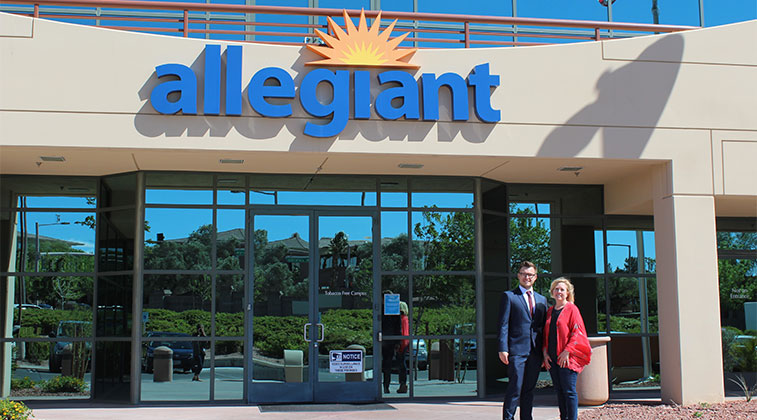 anna.aero’s Jonathan Ford would like to thank Allegiant Air for inviting him to come and visit their headquarters in Las Vegas, especially Kim Schaefer, the carrier’s Public Relations Manager who made the trip possible. Ford would also like to thank Jessica Wheeler, Director of Marketing Communications, for her assistance during anna.aero’s visit.