Poland’s airports grew by 12% in 2015; S16 seat capacity is up 11% as LOT Polish Airlines launches fightback against Ryanair and Wizz Air 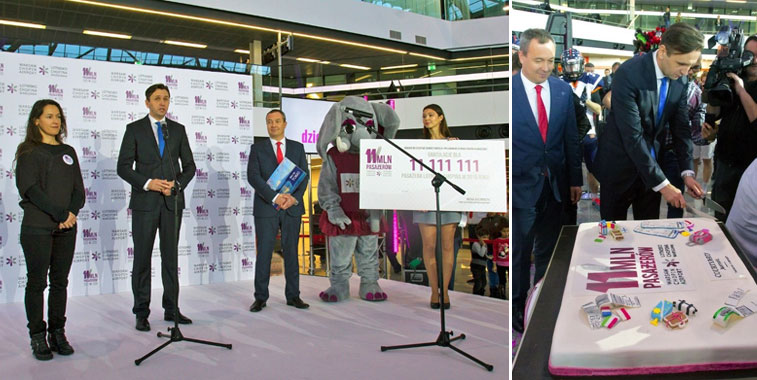 Just before the end of 2015, Warsaw Chopin Airport celebrated handling 11,111,111 passengers in a calendar year, a new record. The milestone was celebrated with speeches, a mascot and a giant cake. Warsaw Chopin and Warsaw Modlin between them handled almost 14 million passengers in 2015, representing around 45% of all passengers passing through Poland’s airports.

Poland’s airports handled just over 30 million passengers in 2015, up over 12% on the previous year. However, this is still less than the population of the country, which currently stands at somewhere between 38 and 39 million. Compare this with other big population countries in the EU such as France, Germany, Italy, Spain and the UK, where annual airport passenger numbers are up to three times greater than the population of the country, so it is clear that there is still considerable potential for aviation growth in Poland as its economy develops. 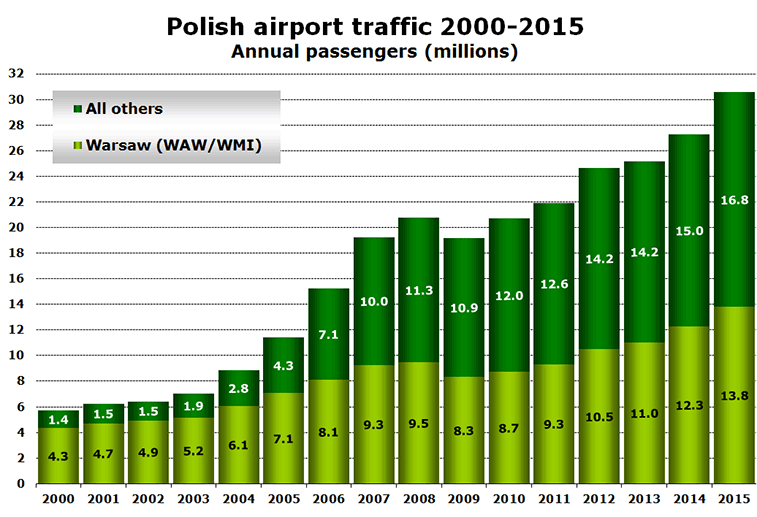 Warsaw’s second airport at Modlin opened in 2012 and last year handled almost 2.6 million passengers, mostly travelling on Ryanair flights. Combining traffic for the two Warsaw airports reveals that the capital’s share of the country’s air traffic has now stabilised at 45%. Prior to Poland joining the EU in May 2004 Warsaw’s main airport, now known as Warsaw Chopin, accounted for almost three-quarters of all airport passengers in the entire country.

Regional airports have benefited most from EU membership

Among Poland’s five major regional airports, each of which has been handling over one million passengers per annum since 2008, Krakow has remained the biggest for the last decade, and is the only other airport to serve more than four million passengers in 2015. Gdansk regained its third place ranking in 2012, which it had lost to Katowice in 2004, when Wizz Air open its first base there. All five major regional airports reported growth in both 2014 and 2015, with Katowice leading the way in 2015 with growth of 13.9%. 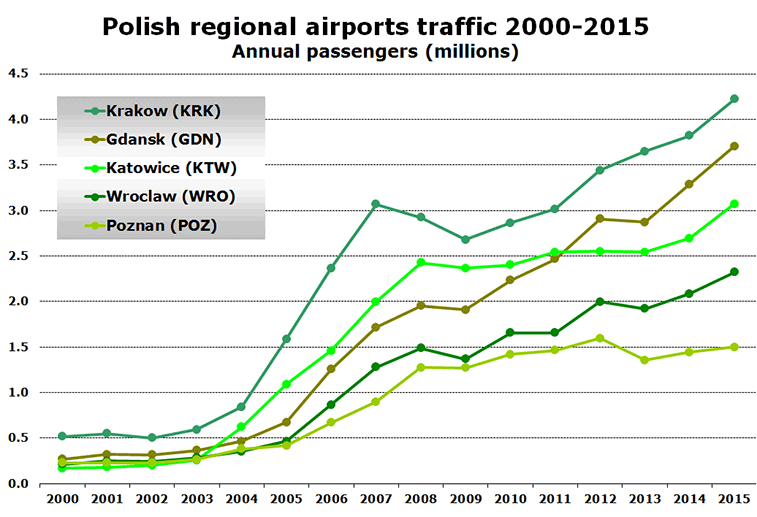 Smaller airports have had mixed fortunes in recent years

In addition there are a further five regional airports handling at least 100,000 passengers per annum. These have had mixed fortunes since 2008. Lodz has seen traffic decline by 16%, Bydgoszcz has reported traffic growth of 22% and Szczecin’s passenger numbers are up 36%. Rzeszow has seen its traffic virtually double during the same seven-year period. 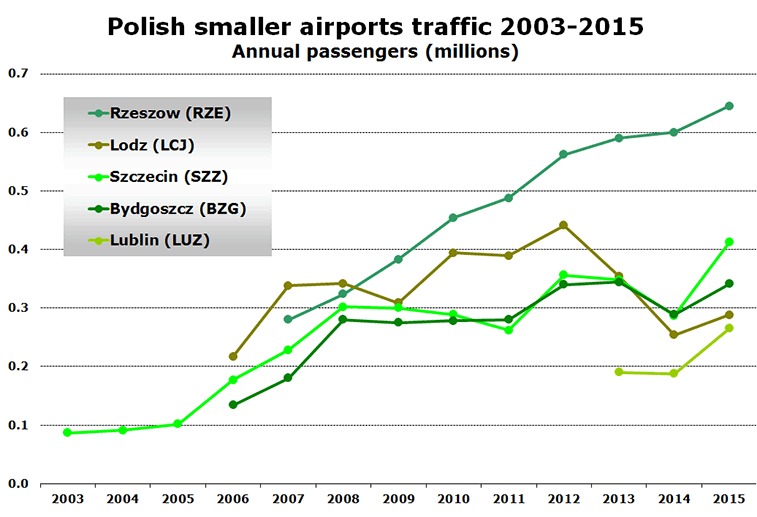 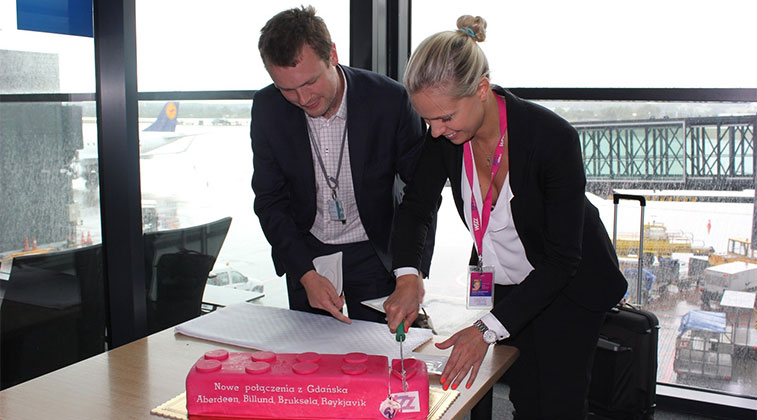 Gdansk Airport is Poland’s third busiest and is a base for both Ryanair and Wizz Air. Last summer the latter opened four new routes from the airport to Aberdeen, Billund, Brussels and Reykjavik/Keflavik. To celebrate, a Lego-inspired cake was produced to commemorate the event. Lego’s HQ is very close to Billund Airport in Denmark.

LOT Polish Airlines fighting back against Ryanair and Wizz Air

Looking ahead, OAG Schedule data for the whole of the summer period (April to September) shows that scheduled seat capacity across all Polish airports is up 11%. That does not mean that passenger number will grow by that much, but it is a good indication that airlines have confidence in the Polish market. Among the top 15 scheduled airlines this summer only two, airberlin and Norwegian, are reporting a reduction in seat capacity. A total of 45 airlines are offering scheduled services this summer. However, the top three of Ryanair, LOT Polish Airlines and Wizz Air account for just over 70% of the market. Of these, the fastest-growing is the national flag carrier which is growing its seat capacity by almost 20%.

Since the beginning of this year, LOT has either started for the first time or resumed service from Warsaw Chopin to Athens, Barcelona, Beirut, Belgrade, Cluj-Napoca, Düsseldorf, Kharkiv, Košice, Ljubljana, Luxembourg, Nice, Palanga, Tokyo Narita, Venice Marco Polo, Yerevan, Zagreb and Zurich. The Star Alliance carrier has also absorbed into its own network some of the aircraft previously operated by eurolot before it ceased operations at the end of March 2015. 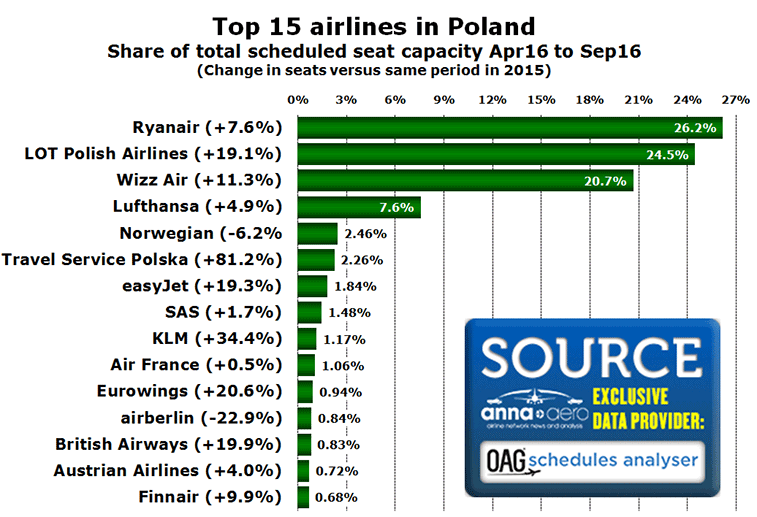 A significant airline in the Polish market which is not included in the OAG data because it is a charter carrier, is Enter Air. The operator, which only launched in 2010, currently flies a fleet of 17 737s, a mix of -400s and -800s. In 2014, when Warsaw Chopin handled 10.6 million passengers, charter passengers accounted for 1.5 million, with Enter Air the leading charter operator with almost 470,000 passengers. 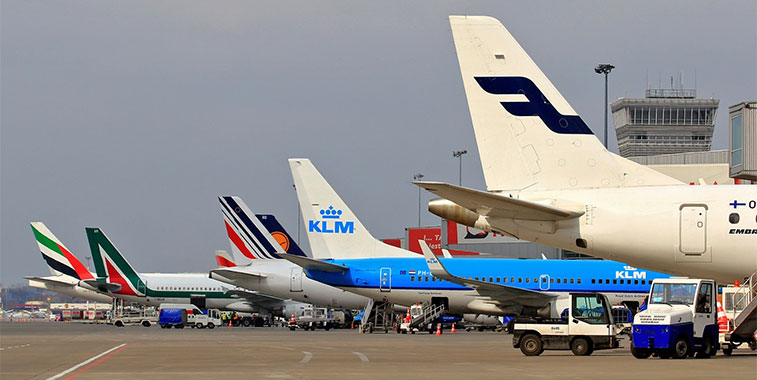 Poland’s busiest airport at Warsaw Chopin attracts most of Europe’s major flag carriers, as well as non-European carriers such as Emirates, Qatar Airways and, starting this summer, Air Canada rouge.