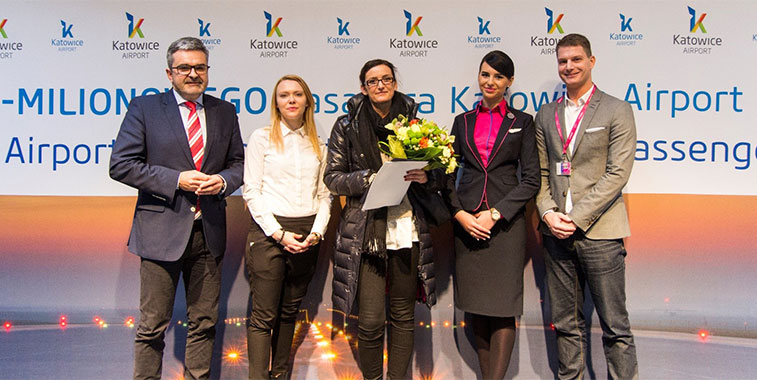 Katowice Airport is Poland’s fourth busiest airport and last year handled over three million passengers for the first time in its history. In 2003, the year before Poland joined the EU, the airport handled just 260,000 passengers. Since then it has experienced an almost twelvefold increase in passenger numbers. Last year it reported traffic growth of almost 14%, the highest rate of growth since 2008. The airport’s rapid expansion since 2003 can mostly be attributed to Wizz Air’s decision to make the airport a base in May 2004, within weeks of Poland becoming a member of the EU. Since then it has launched a total of 51 routes from the airport, of which 28 will be operating this summer, an increase of two on last summer. Service to Liverpool is resumed while Alghero is a new destination for the airport. It was also recently revealed that Wizz Air would start flights to Dubai Al Maktoum from 31 October. 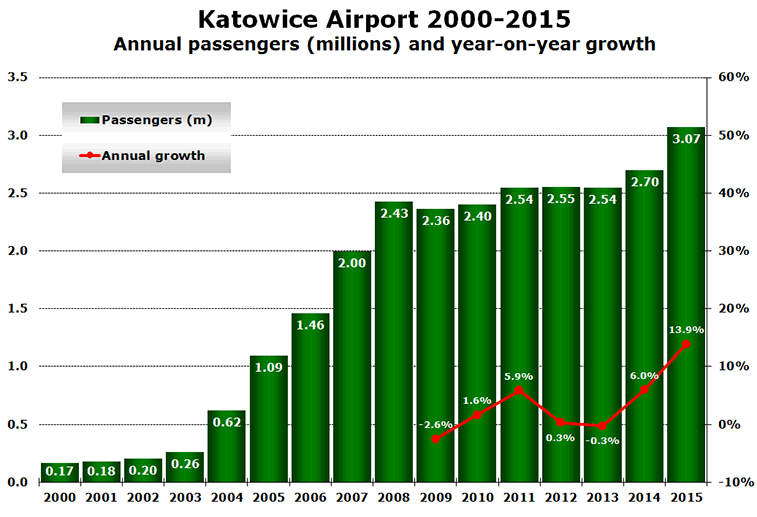 This year has got off to a strong start with passenger numbers in the first three months of 2016 up almost 12% to 520,000. The airport’s SVID (Seasonal Variation In Demand) score for 2015 was 19.81 (“Poor”) which is not as good as Warsaw Chopin (5.42, “Good”) or nearby Krakow (3.35, “Good”). Traffic normally peaks in either July or August. Last year the peak month of July was almost three times busier than the airport’s quietest month of January. 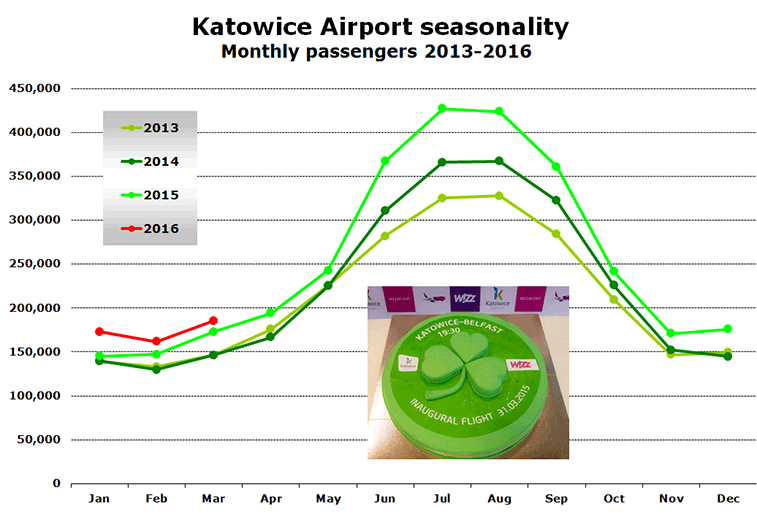 Wizz Air is by far the leading carrier at the airport. According to OAG Schedules Analyser data the ULCC accounts for almost 70% of scheduled seat capacity this summer, operating 114 weekly departures across a network of 28 routes. According to a recent Wizz Air press release, the ULCC was responsible for over 1.5 million passengers at the airport in 2015 and has five aircraft based at the airport.

Lufthansa has 10% of seat capacity thanks to its thrice-daily flights to Frankfurt, while Ryanair accounts for a further 9%. The Irish ULCC operates 14 weekly departures spread across five routes; London Stansted (served daily), Dublin (thrice-weekly flights), Birmingham (twice-weekly flights) and Chania and Corfu (each served weekly). Ryanair’s new service to Corfu (starting 2 May) appears to be coming at the expense of its previously operated weekly service to Alicante which is not being offered this summer.

Other carriers operating scheduled services at the airport include LOT Polish Airlines, which operates twice-daily flights from Warsaw Chopin, while Eurowings offers three weekly flights from Düsseldorf. This summer Katowice will welcome the Greek carrier Ellinair for the first time. It will begin weekly flights to Heraklion and Thessaloniki starting in June. 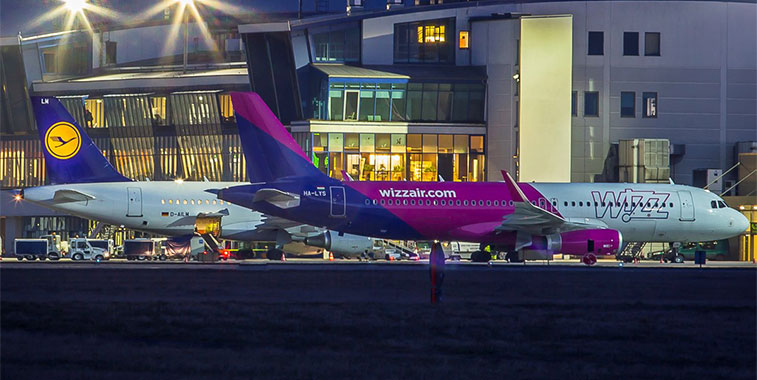 As at other Polish airports there is a busy programme of charter services during the peak summer period. These are offered by airlines such as Enter Air, Small Planet Airlines and Travel Service Polska. Destinations in and around the Mediterranean account for the majority of these flights.

UK is leading country destination ahead of Germany

Analysis of OAG schedule data for this summer reveals that Katowice has direct flights to eight destinations in the UK, of which six are offered by Wizz Air and two by Ryanair. In total this summer there will be 47 weekly flights to the UK of which 27 are to London airports. There are 44 weekly flights to German airports, with Eurowings, Lufthansa and Wizz Air offering non-stop flights to five different airports. A total of 20 countries are served with scheduled flights this summer, including non-European destinations in Egypt, Israel and Tunisia. 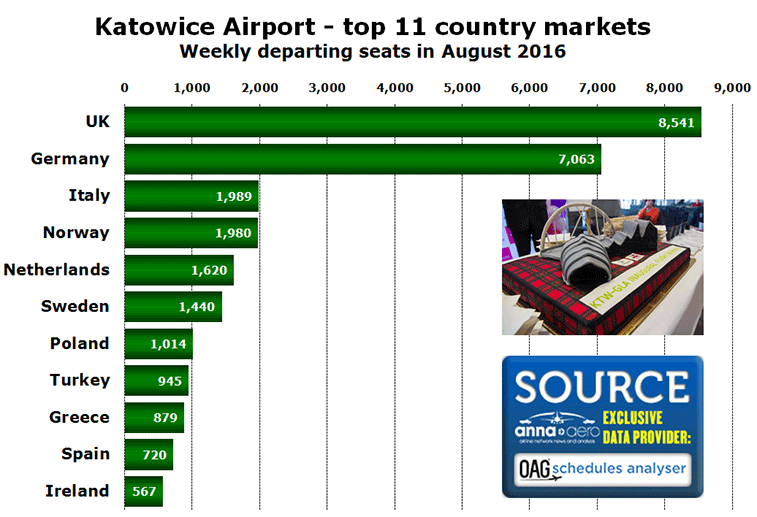 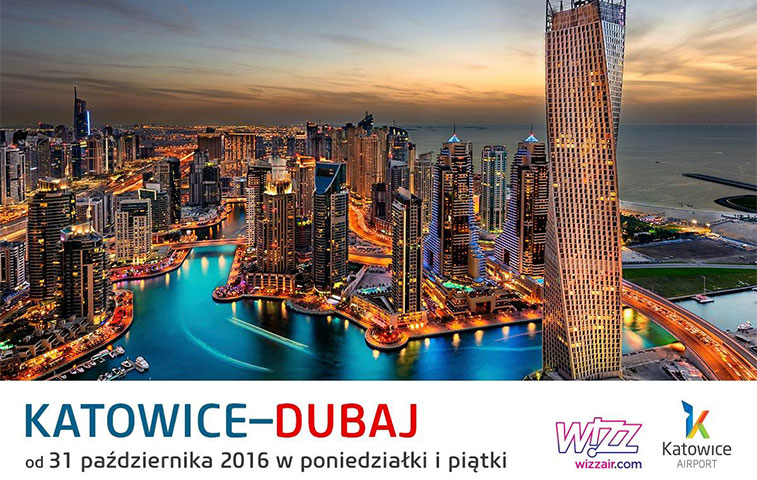 Coming soon! Wizz Air recently announced that it would start flights to Dubai World Central from 31 October. The new route will operate twice-weekly (Mondays and Fridays) using the airline’s A320s.