American Airlines, Delta Air Lines and United Airlines (the USB3) have dropped 25 international routes for this summer including Dubai

Back in December 2014, United Airlines and Denver Airport were very excited about the launch of daily flights to Panama City in Panama. However, last September the route was dropped after just nine months of operations, despite the Star Alliance carrier feeding the hub of fellow Star Alliance member Copa Airlines. This is just one of 25 international routes that anna.aero has identified that the USB3 airlines have dropped when comparing August 2016 schedule data with August 2015.

Here at anna.aero we love to report on all the new and exciting route launches that the world’s airlines offer up each week. While airlines are normally more than happy to share details of route launches with us, when it comes to the difficult, but sometimes necessary, task of terminating routes, airlines are usually rather less forthcoming. So this week we take a look at which international routes the three big US global carriers (the USB3) – American Airlines, Delta Air Lines and United Airlines – have dropped between the first week of August 2015 and the first week of August 2016. Given that US carriers are currently extremely profitable it could be argued that any routes being dropped must be performing especially badly. Routes considered must have been served with at least three weekly flights in August 2015 and have ceased operating before the first week of August 2016.

Starting with American, a total of 11 routes have been identified that meet the criteria mentioned above. There are four routes to both Brazil and Canada and one each to Germany, Israel and Mexico. Edmonton, known as The Oil Capital of Canada, has lost three year-round routes, apparently suffering the consequences of the on-going downturn in the global oil industry. However, the Canadian airport confirmed to anna.aero that the Phoenix route is now seasonal and will resume in early November 2016. The Brazilian economy is also struggling at present, which helps explain the termination of four routes to the South American country, all from Miami.

The route that had been operating the longest before being dropped was the Chicago O’Hare to Mexico City service. This is a route that is also flown by three other carriers; Aeromexico (18 weekly flights), United (daily flights) and Volaris (five weekly flights).

The highest profile casualty in Delta’s international route network has been its daily service from its main hub in Atlanta to Dubai. This route was launched just under seven years ago, but the airline’s decision to terminate the route gained considerable media coverage. Delta pointed the finger at the ‘heavily subsidized’ operations of UAE carriers. Emirates currently offers 14 daily flights to 10 US destinations, though Atlanta itself is not (currently) one of them.

The New York LaGuardia to Halifax route could almost be excluded from this list as the route was simply switched from one New York airport to a different one. Similarly, the Atlanta to Brussels route has been suspended because of operational difficulties at Brussels Airport as a result of damage to the airport following the recent terrorist attacks.

A total of seven international routes have been dropped by United  using the criteria defined earlier. Two of these involve Canadian airports, two involve Mexican airports while the others are in Kuwait, Panama and the UAE. Compared with Delta, United made relatively little fuss about dropping its last service to Dubai, which it launched just over seven years ago. The seven routes were spread across five of United’s bases. The shortest lived route was the airline’s service from Denver to Panama City which was launched with much enthusiasm in early December 2014 and operated for less than a year, prior to a brief resumption for seasonal ski services. 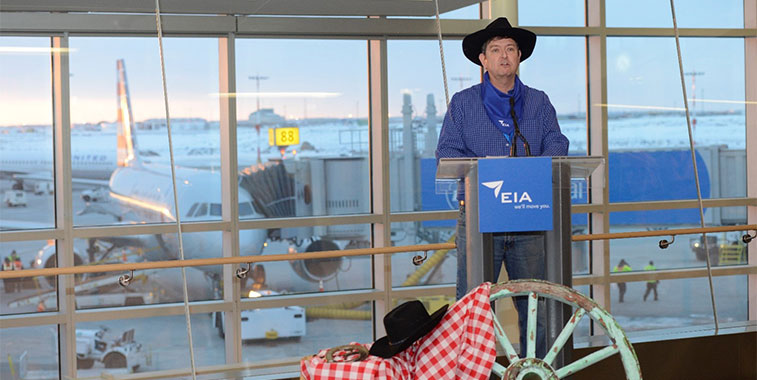 Edmonton Airport President & CEO Tom Ruth wore a cowboy hat to celebrate the launch of American Airlines’ Dallas/Fort Worth to Edmonton service on 1 April 2014. The route was suspended this February with the airport citing exchange rate issues as one of the factors for the route’s withdrawal.