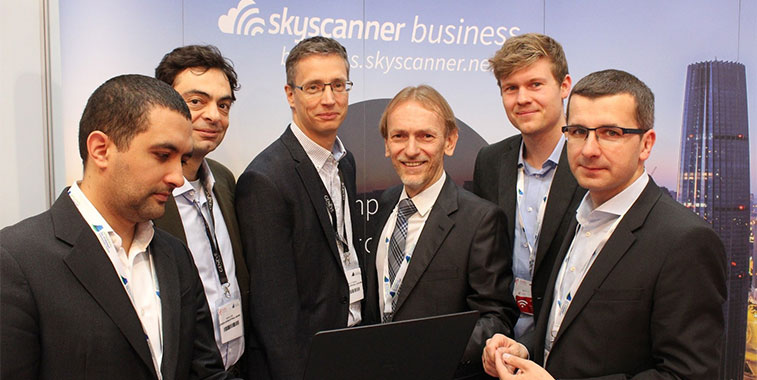 With nearly 40,000 searches last year, a prospective new route from Kraków to Geneva has been identified as this week’s Skyscanner for Business-anna.aero “Unserved Route of Week” – a powerful new kind of analysis based on aspirational data captured from the Skyscanner.net flight comparison site used by +50 million unique visitors per month. As the curtain falls on a memorable Routes Europe 2016 http://www.routesonline.com/ where most of Europe’s airport and airline network planners have been gathered in Kraków for the last few days, we felt it was only right to feature Poland’s second largest airport again this week. 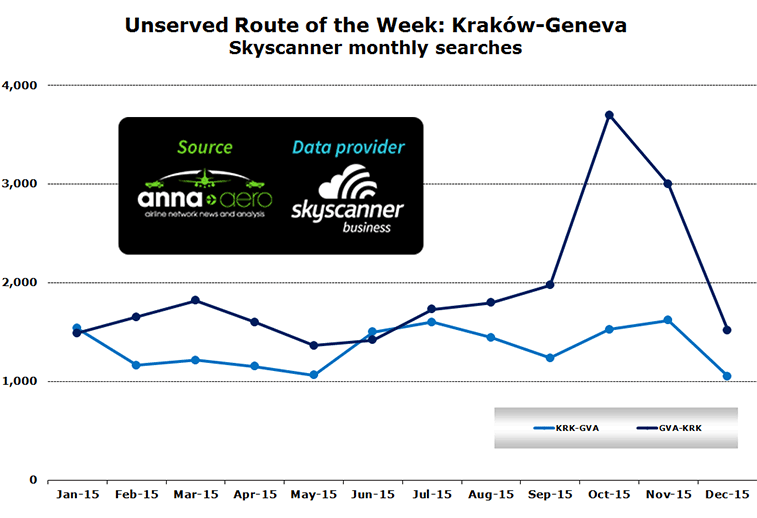 With more traffic originating from the Swiss end of this route ‒ an 59/41 split – this route looks like an obvious candidate for easyJet, the largest carrier at Geneva, according to OAG schedules data for the week commencing 22 April. The LCC, which currently offers 54 destinations from its third largest base (after London Gatwick and Milan Malpensa), does not fly to any Polish destinations from this important base, although it does fly from Basel to Kraków. In fact, easyJet only flies to one destination in Poland – and that is Kraków – which the carrier flies to from 10 of its bases  ‒ Paris CDG (11 times weekly), London Gatwick (nine), Bristol and Edinburgh (both four), Hamburg, Liverpool, Lyon, Malpensa, Basel and Belfast International (all three).

Considering the Polish end of the route, Wizz Air is probably the most likely operator, as it presently offers four twice-weekly services to Geneva from its bases in Bucharest, Sofia, Warsaw Chopin and Cluj. The country’s biggest airline, which is Ryanair, currently only has limited operations to Switzerland, and none from Kraków, with a daily service from London Stansted, along with a thrice-weekly route from Dublin, both to Basel. LOT Polish Airlines does at least link the two countries, flying double-daily sectors from Warsaw Chopin to Geneva and Zurich. However, the carrier is unlikely to consider a route to Geneva from Kraków high on its to-do list, given that it only flies domestic services to Warsaw Chopin and Gdansk at this time.

When looking at the last year of searches, the busiest month for potential traffic flows (for both directions on the route combined) is October 2015 with over 5,200, nearly 3,000 more than the lowest monthly figure, which was recorded in May 2015 (2,400). The seasonality profile of this search data is more extreme than last week’s Unserved Route of the Week (Kraków-Istanbul), with the low-month traffic representing 53% of the highest month. According to OAG Traffic Analyser, because there is no direct service, the top three connecting options chosen by those passengers who did book travel between Kraków to Geneva in 2015 were Frankfurt (28%), Vienna (15%) and Brussels (14%). In total, 12 different airports were used by connecting passengers as intermediate points between the two cities.

An O&D that is not served by a non-stop flight will typically display a low purchase rate and low traffic. In this instance Skyscanner’s Travel Insight indicates a monthly average of just 8.1% for the Kraków to Geneva route (see graph below). Therefore, if there was a Kraków to Geneva route, and if bookings performed in line with the “Skyscanner market average” for direct services at both airports (9.1%), the airline operating this route could immediately expect an improved purchase rate of 12% without any increased marketing spend. However, with nearly 40,000 annual searches, the potential city pair should already be very sustainable. 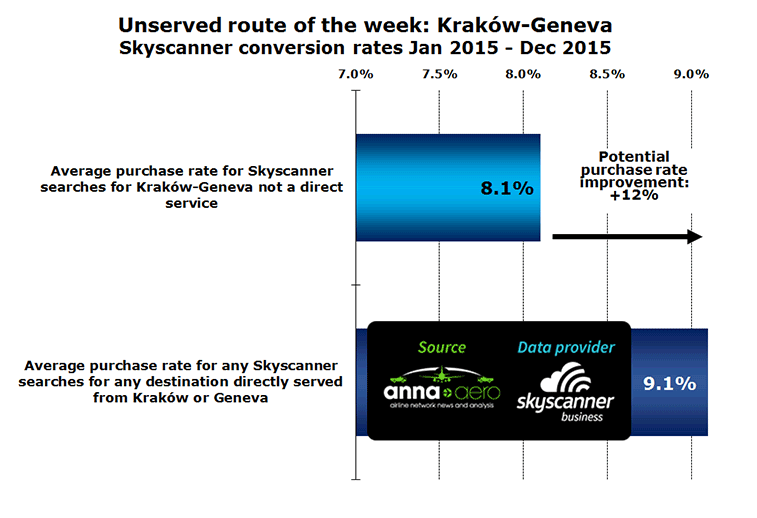