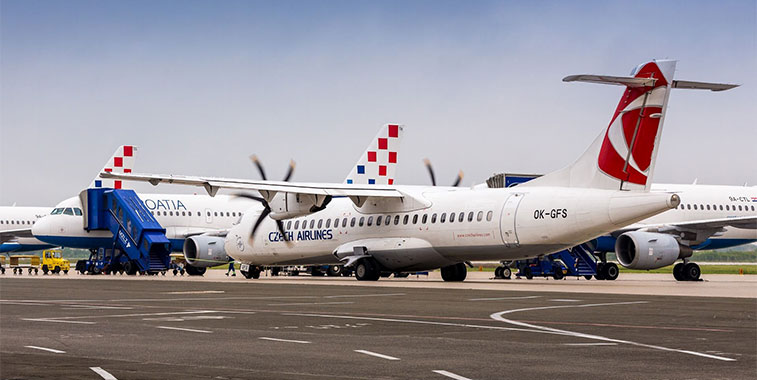 Czech Airlines returned to the Croatian market with the resumption of flights between Prague and Zagreb on 27 April. The SkyTeam carrier last flew the 504-kilometre route in July 2012. Croatia Airlines will also be launching the route in May having last operated a link in March 2006.

Passenger numbers at Croatia’s airports continue to show steady rather than dramatic growth despite the country becoming the 28th and newest member of the European Union in July 2013. After growing by 6% in 2014, demand across the country’s six main airports was up 7% in 2015, to just over seven million for the first time. Growth was recorded at Rijeka (+31%), Split (+12%), Dubrovnik (+7%) and Zagreb (+6%) but there were traffic reductions at Pula (-6%) and Zadar (-2%). 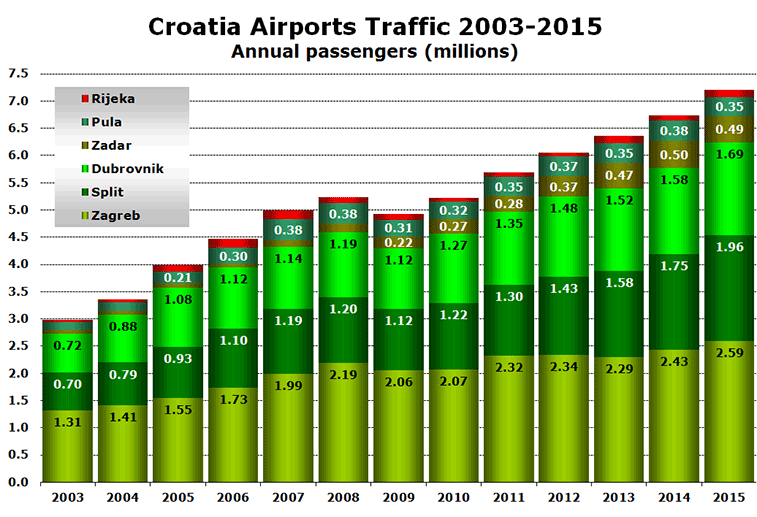 Analysis of OAG Schedules Analyser data for this August reveals that Croatia Airlines is still the country’s busiest carrier for international services, ahead of easyJet. Last year it seemed like easyJet might catch and pass the national carrier, but with capacity growth of 7% this summer, the Star Alliance carrier has actually extended its lead over the UK-based LCC which is only showing an increase of 4% in its seat capacity. Both carriers are launching several new routes this summer. Croatia Airlines is adding direct flights, starting in mid-May, from Zagreb to Lisbon, Milan Malpensa, Prague and St. Petersburg, while easyJet is adding a total of six new routes, three each to Dubrovnik and Pula. 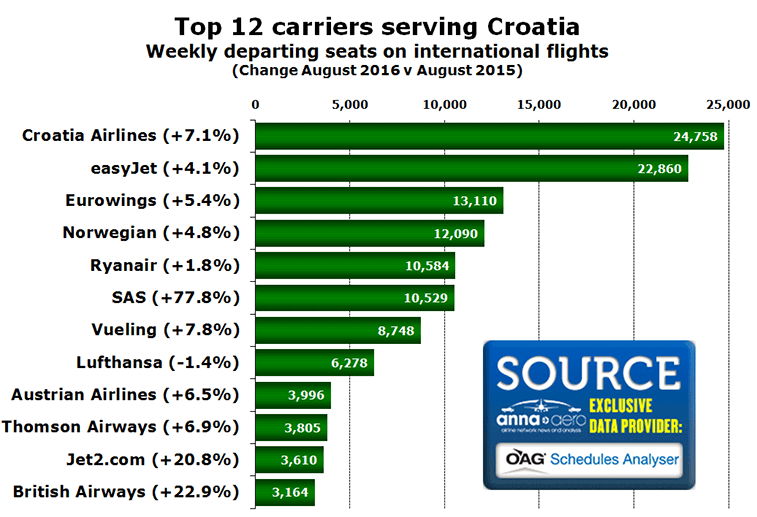 The country’s next busiest carriers are Eurowings, Norwegian and Ryanair, with SAS the biggest foreign national carrier in Croatia. Its significant growth is primarily down to an increase in frequencies rather than new routes. In terms of new routes, apart from easyJet the biggest new route launchers are airberlin (10 new routes, for a total of 12), Volotea (five, total of eight) and Transavia (four, total of six). Other highlights include Turkish Airlines starting service from Istanbul Atatürk to Dubrovnik (on 12 May), Finnair linking Helsinki to Pula (on 20 June) and Czech Airlines launching services to Zagreb from Prague on 27 April. 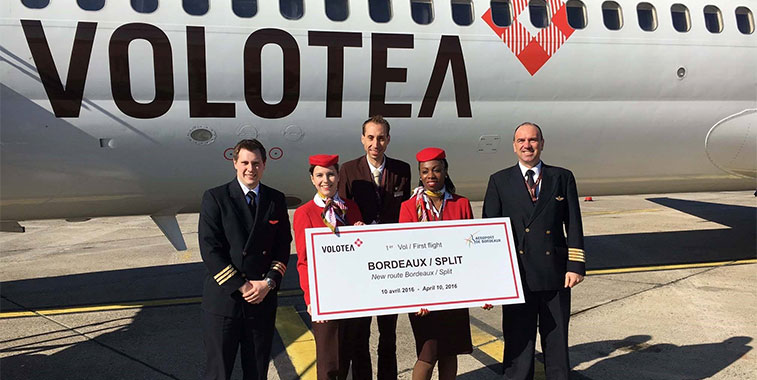 Volotea has increased its Croatian network this summer from three to eight routes. One of the five new routes, between Bordeaux and Split, was launched on 10 April and will be operated twice-weekly.

Capacity on international routes this summer (first week of August) is up 16%, confirming Croatia as one of this year’s booming country markets. Routes to the UK and Germany still account for almost 40% of scheduled capacity, with both markets showing solid double-digit growth this summer. In fact, out of the top 15 country markets, only one (Italy), is seeing a reduction in seat capacity. This is mostly down to easyJet closing its Rome Fiumicino base and dropping its daily summer flights to Dubrovnik and Split. However, Alitalia has also dropped its two routes from Milan Linate to Dubrovnik and Split. 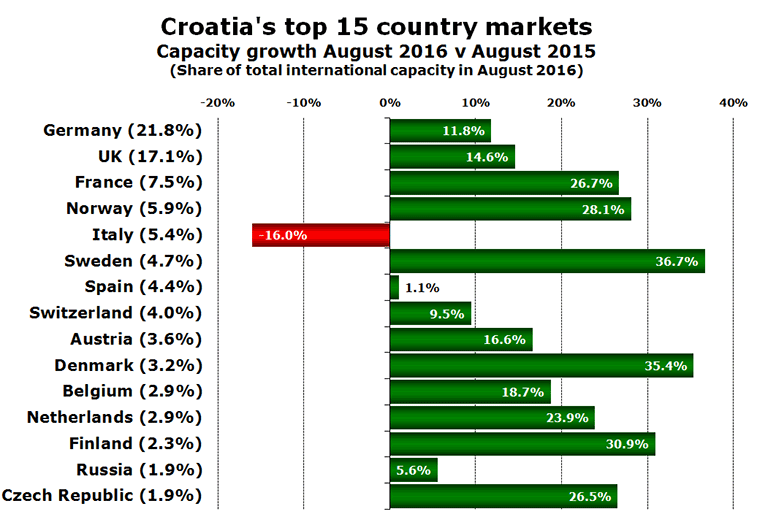 After links to Poland disappeared with the collapse of eurolot, this year has already seen LOT Polish Airlines begin daily flights from Warsaw Chopin to Zagreb (on 2 January) with services to Split and Zadar starting imminently. Another new carrier for 2016 is NIKI, which will introduce flights from Vienna to Dubrovnik and Split in mid-May. Despite having over 20 bases across airports in Central and Eastern Europe, Wizz Air does not have any in Croatia. In fact it only operates one route in the country, a daily service from Split to London Luton, on which it competes directly with easyJet. 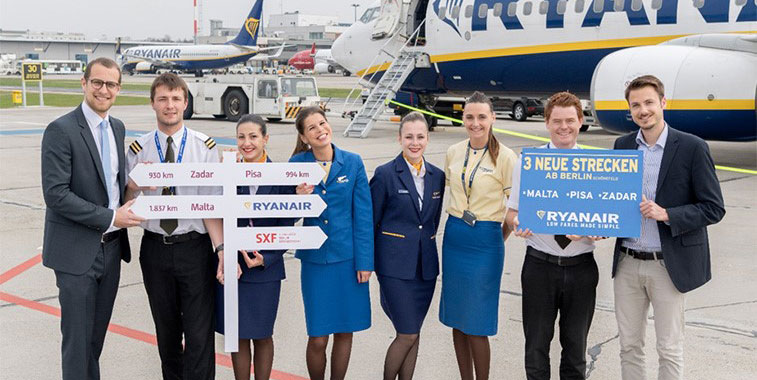 Ryanair, the fifth biggest carrier in Croatia this summer, is only launching one new route to the country’s airports this year. This was from Berlin Schönefeld to Zadar, a twice-weekly service that began on 4 April. In total Ryanair operates 21 routes to Croatia, 13 of which are from its base at Zadar.