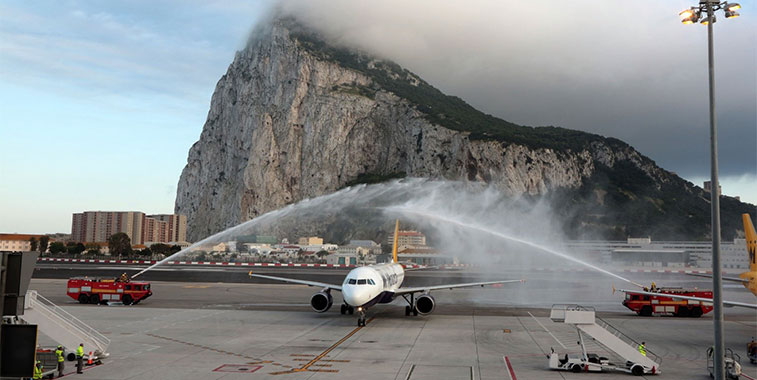 Between a rock and a hard place? But Monarch Airlines is upbeat, starting a dozen new routes this summer including a four times weekly service from London Gatwick to Gibraltar, which was welcomed in Gibraltar on Sunday 1 May by this striking water arch salute.

There has been considerable media speculation in the UK about the future of London Luton headquartered Monarch Airlines. The leisure carrier was rescued from potential collapse in 2014 by Greybull Capital which invested around 150 million Euros into the business to keep it going. Last year the airline contracted, the fleet was reduced by eight aircraft and passenger numbers fell from seven million in 2014 to around 5.7 million, according to UK CAA statistics. This is around the same number the carrier handled in 2006 and 2010. Since 2000 the biggest change has been the shift from charter operations to scheduled operations, with charter flights ending in mid-April 2015 based on CAA data. 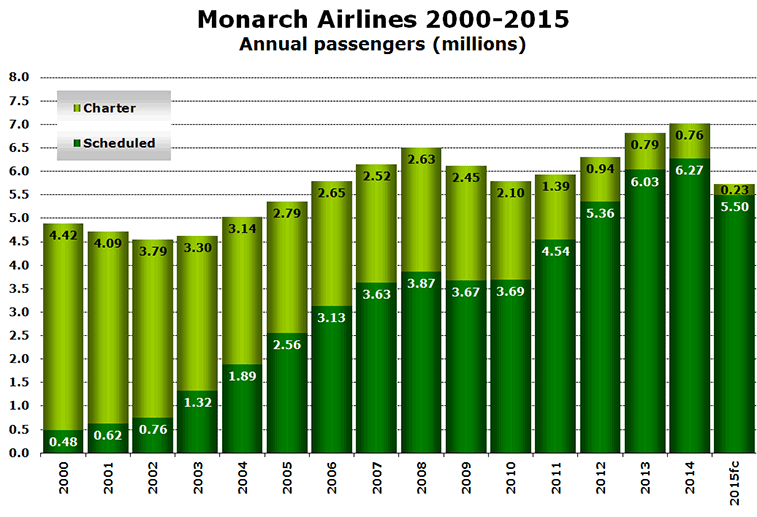 Seasonality remains a major issue for the carrier with scheduled passenger demand in 2015 in January, February and November around one-third of the figure achieved during the peak summer month of August. The odd looking kink in the 2013 data in April can be explained by the fact that, as in 2016, Easter fell in March rather than April. 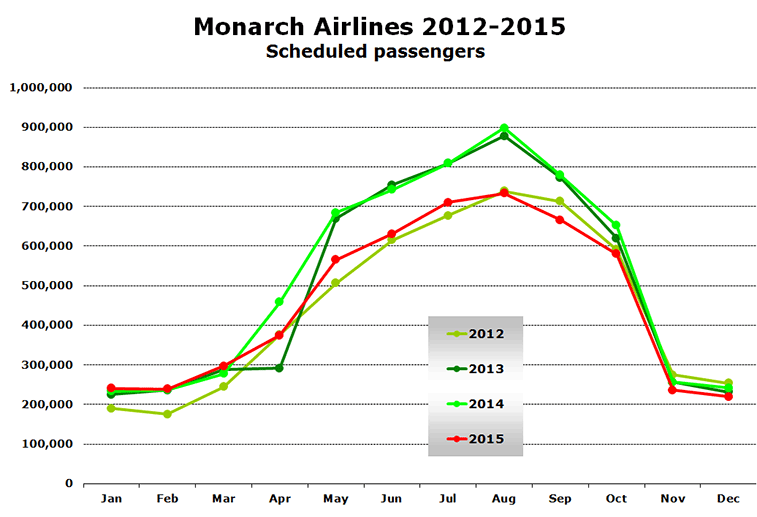 Looking ahead to this summer, based on analysis of OAG Schedules Analyser for the first week of August 2016 compared with the first week of August 2015 reveals that London Gatwick remains the airline’s biggest base in terms of weekly departures (with 149), ahead of Birmingham (133) and Manchester (116). However, in terms of destinations served Birmingham offers 25 compared with 24 at London Gatwick and 23 at Manchester. The airline’s London Luton base is around half the size of the Manchester base, while the Leeds Bradford base is half the size of the Luton base. Overall the number of flights is up around 5% compared with last summer.

There are three new destinations for the airline this summer (highlighted in yellow in the following table); Lisbon, Madrid and Tel Aviv. These new destinations generate a total of six new routes, while there are also six new routes to destinations already served but from different bases. The new route from Birmingham to Madrid is of particular note as Monarch will be one of four airlines serving that market this summer, the others being Iberia Express, Norwegian and Ryanair.

However, compared with last summer Monarch has also dropped eight routes resulting in the termination of scheduled services to Agadir (Morocco), Milas-Bodrum (Turkey), Enfidha (Tunisia), Hurghada (Egypt) and Zakinthos (Greece). As a result Spanish destinations now account for almost 59% of the airline’s flights in August compared with 52% in 2015. Turkey’s share of Monarch flights has fallen from almost 10% to just 5%, while Egypt has also seen its market share halve from 5% to less than 2%. Palma de Mallorca and Malaga have now both overtaken Faro, last year’s most popular destination with regard to weekly flights, with Spanish airports taking seven of the top 10 destinations for the airline. Apart from Faro (in Portugal) the only other non-Spanish airports in Monarch’s top 10 are Dalaman (in Turkey) and Gibraltar. 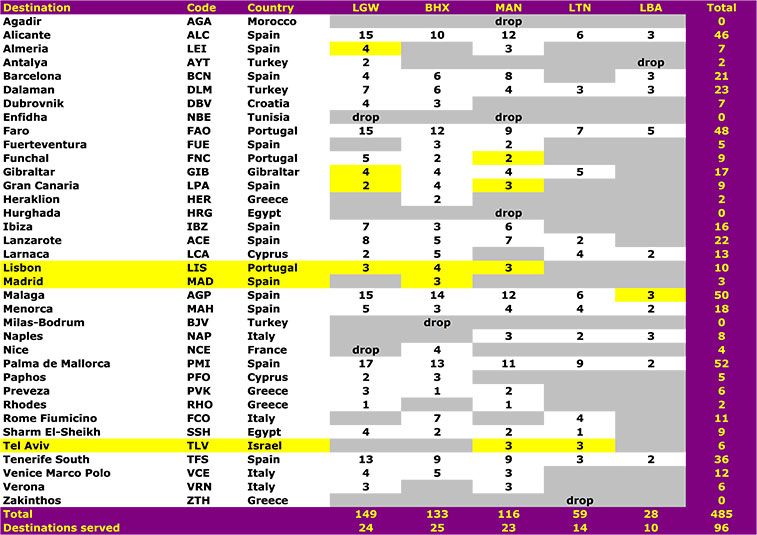