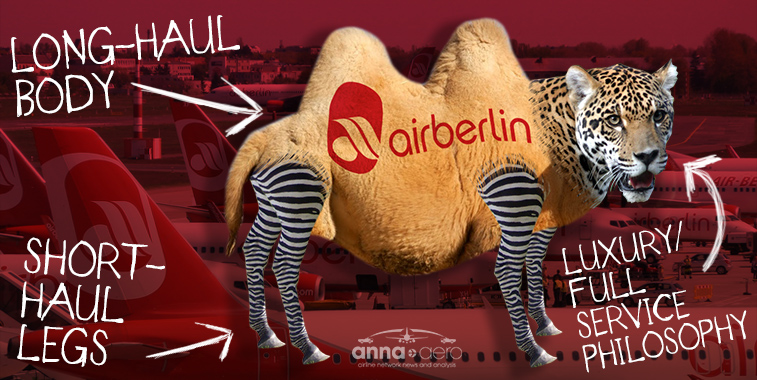 airberlin’s management are working hard to turn the beast around, but what sort of airline is airberlin anyway? It is Germany’s second biggest domestic airline, and also one of its biggest leisure airlines (with a proud reputation for a full-service type service). It operates routes to several major European cities with business-style multiple daily frequencies from its main hubs in Berlin and Düsseldorf. It also operates long-haul flights to the US and also low-frequency touristic services to many Mediterranean destinations from multiple German airports. It is both a member of oneworld and an Etihad Airways Partner…need we go on??

The recently revealed financial results for airberlin in 2015 do not make pleasant reading for the carrier, which is both a member of oneworld and an Etihad Airways Partner. Add in the fact that it is also one of Germany’s biggest leisure airlines and some of the reasons for the airline’s consistent lack of profits this decade become clearer. What sort of airline is airberlin? Despite numerous management changes in recent years, the carrier, which boasts a fleet of well over 100 aircraft, and carried over 30 million passengers in each of the last six years, would appear still to be trying to be all things to all people. It is Germany’s second biggest domestic airline (with 26% capacity share) after Lufthansa (51%), and ahead of Lufthansa’s in-house LCC Eurowings (20%), and it operates to several major European cities with multiple daily frequencies from its main hubs in Berlin Tegel and Düsseldorf. But it also operates long-haul flights to the US as well as low-frequency services to many Mediterranean destinations from multiple German airports. Despite significant cuts it is also, still, the biggest carrier at Palma de Mallorca with 20% of seats this May (ahead of Ryanair with 15%), although five years ago airberlin’s share at the Spanish airport was 30%. In recent years the airline has tried to move towards profitability by reducing capacity, with demand peaking back in 2011 at over 35 million passengers. However, for various reasons, this has not yet happened. 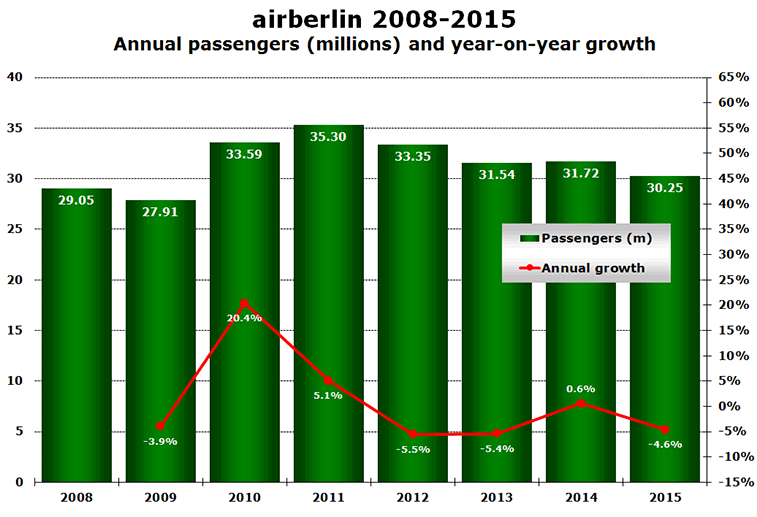 Latest figures for April 2016 show that passenger numbers are down 7.1% to 7.6 million in the period January to April. However, load factor (or capacity utilisation as airberlin calls it) is up 0.3 percentage points to 82.9% across the same period.

Capacity down this summer at eight of top 15 airports

Looking ahead to this summer (April to October) and comparing scheduled seat capacity on airberlin flights (so not including subsidiary NIKI’s services) to last summer, reveals that the airline is cutting seat capacity at eight of its top 15 airports, though not, significantly, at either of its two main hubs in Berlin and Düsseldorf. Overall, summer seat capacity is set to decline by a modest 1.4%, with the number of flights staying virtually unchanged. 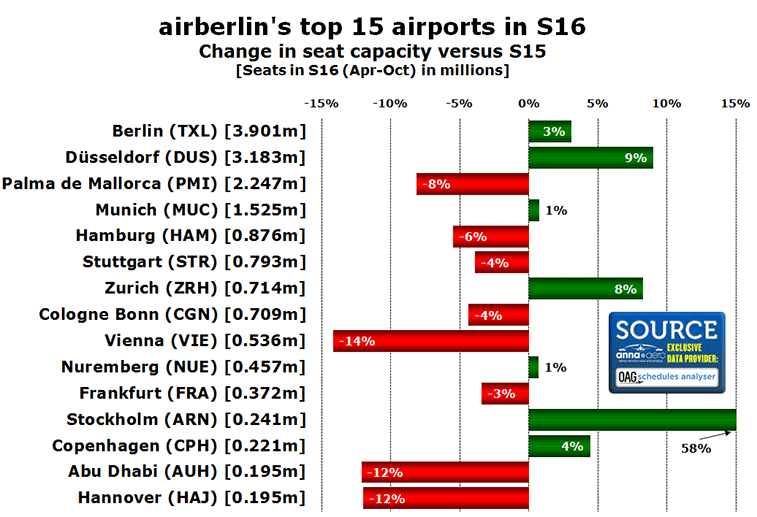 This summer the number of airports served by airberlin operated flights is 113, the same as last summer. However, this hides the fact that 12 airports are no longer served in summer while 12 airports are served which were not last year. Out go the likes of Djerba, Enfidha, Kaliningrad, Moscow Domodedovo, Seville and Valencia, while in come Bologna, Boston, Havana, Larnaca, San Francisco and Sofia, as well as three destinations in Croatia; Pula, Rijeka and Zadar.

US and Sweden see significant growth; Russia dropped and Turkey down 50%

A look at airberlin’s biggest country markets for S16 and how they compare with S15 reveals that while capacity from German airports is up almost 5%, seat capacity at Spanish airports has been cut by almost 10%. The US is a fast-growing market, as is Sweden. The rapid growth in the Hungarian market is purely down to a frequency increase on the Berlin Tegel to Budapest route.

Bulgaria, ranked 22nd out of airberlin’s 32 summer country markets, is the highest new entry. Bulgaria, Cyprus and Kosovo replace Montenegro, Russia and Tunisia as the number of country markets remains unchanged compared with last summer. Reflecting changes in the world we live in, there are significant capacity cuts to Turkey (down 52%), Israel (down 41%), Egypt (down 54%) and Morocco (down 65%). None of these countries are currently in the airline’s top 15, though in S15 Turkey ranked 11th and Russia 13th.

Among major European markets it is worth noting that airberlin ceased serving mainland UK destinations in June 2014, when it terminated its Düsseldorf to London Stansted service. Now, its only UK services are low frequency, summer seasonal services to Guernsey and Jersey in the Channel Islands. 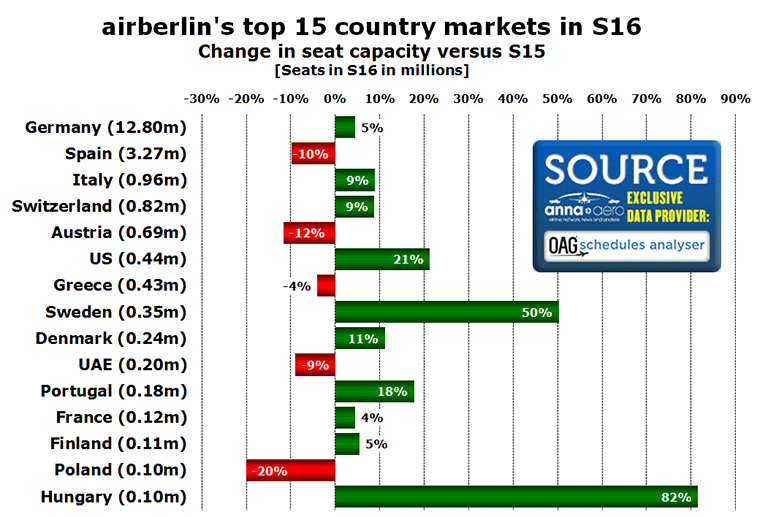 Number of routes operated drops by around 10

This summer airberlin is operating around 285 routes compared with 295 last summer. The net reduction of around 10 routes is explained by the carrier dropping almost 40 routes but adding almost 30. The figures are complicated slightly by a number of ‘triangle’ services. The following table summarises the new and ‘lost’ routes that operate (or operated) with at least two weekly frequencies

airberlin has finally stopped operating a virtual hub at Palma de Mallorca. The carrier no longer operates flights from the Spanish island airport to any Spanish (or Portuguese) destinations. Last summer it still served seven destinations in Spain, plus Faro, from Palma. Five years ago airberlin connected Palma with 14 destinations in Spain and two in Portugal. With Iberia being a fellow oneworld member it seems that the airline has finally decided that these (mostly domestic) services can best be operated by the local carrier.

Several of the new routes have been operated before by airberlin, such as Berlin to Sofia, Nuremberg to Ibiza and Zurich to Larnaca. Düsseldorf’s two new US routes to Boston and San Francisco were originally also going to be joined by a four times weekly service to Dallas/Fort Worth, also scheduled to start in early May. However, at the end of January sales for this service were suspended with no new launch date indicated. Whether this was induced by poor ticket sales or some behind-the-scenes issues involving oneworld partner American Airlines is unclear.