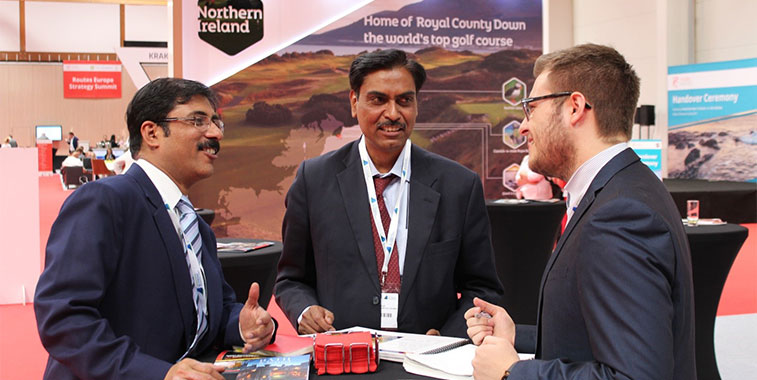 A city that is home to around 25 million people (2014 estimate), Delhi is the largest city in India in relation to geographical area, and third largest in the world in regards to population after Tokyo and Jakarta. The rate of the city’s population growth has shown with it jumping above Seoul in relation to population size last year. As a result of Delhi’s population size, it is of no surprise to see Delhi Airport witnessing over 10 million more passengers last year when compared to 2011. In order to get a better understanding of the airport’s successful growth in the past few years, anna.aero’s Jonathan Ford caught up with Abhijnan Sengupta, Associate GM Airline Marketing & Route Development, Delhi Airport, and Jitendra Singh, Associate VP, Head Airline Marketing & Route Development, Delhi Airport, at this year’s Routes Europe conference which took place in Krakow.

Speaking to Ford, Sengupta and Singh highlighted just some of the aviation achievements that Delhi has witnessed during the past few years. “In regards to Delhi’s long-haul market we have just witnessed Jet Airways first services to Amsterdam, while at the end of last year Air Canada inaugurated flights from Toronto Pearson which it is operating with its 787-8 fleet,” commended Singh. As well as the two mentioned routes by Singh, the airport has also witnessed national carrier Air India commence services to San Francisco and Vienna, with the latter launching just a few weeks ago. This means that Air India now operates to eight destinations in Europe. “Within the Asian region we have witnessed AirAsia India commence services, with it having three aircraft based in Delhi. AirAsia X has been welcomed with its new operation from Kuala Lumpur. Jet Airways has added Muscat operations while Bhutan Airlines has launched operations to Paro in Bhutan,” added Singh. Not only has the airport welcomed a wealth of new routes, existing services are seeing increases as well. “We have just witnessed Aeroflot adding a second daily rotation from Moscow, so we are happy to see that existing markets are continuing to prosper.”

Since January 2011 Delhi has recorded an average monthly growth rate in passenger traffic of 8.9%. The best month for growth over the past five-year period was achieved in March 2011, when it grew by just over 22%. The worst performing month for Delhi was October 2012, when it fell by over 27% when compared to the same month a year previous. Since 2011, international traffic has grown from Delhi by six million passengers, representing a growth rate of 37%. Domestic traffic has grown 35% over the same time period. 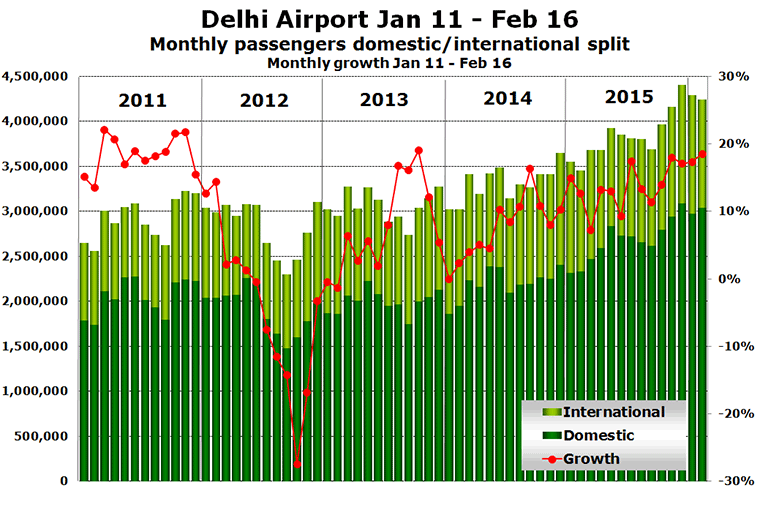 What is interesting to note is that although Delhi has seen its traffic grow by 10 million passengers since 2011, in 2012 traffic fell from 35 million to 33, meaning that since then traffic has risen by 12 million. In the airport’s recent history, December 2015 was when it surpassed three million domestic passengers in one month, with the second being February of this year. Looking back at the past few years, March 2012 was when international traffic surpassed one million passengers a month for the first time. The only other month in that year which welcomed over one million international passengers was December. Since October 2013 each month has welcomed over one million international passengers. Another milestone month in the airport’s recent history was November last year when it welcomed over four million passengers in one month. Since this, each month until February (last available data) has witnessed over four million passengers. The airport’s SVID (Seasonal Variation In Demand) score for 2015 was 0.52 (“Excellent”), although in 2014 the airport achieved 0.37, also an (“Excellent”) score.

Speaking to anna.aero, Singh spoke of how transit traffic was growing. “In 2010 transit traffic accounted for around 2.3% of all passengers. Last year this was close to nearly 20%,” commented Singh. One of the key aims of the airport attending Routes Europe in Krakow was to highlight the airport’s competing potential against Middle Eastern hubs in becoming a new gateway to link Europe with Asia. In regards to its 2020 plan, the airport’s main focus is on long-haul growth which will help prosper its development as a global hub. “The main aim of the airport is to make Delhi a long-haul destination. We have got the Indian subcontinent and surrounding nations well covered,” stated Singh. “We now serve 58 domestic airports, beating our nearest rival Mumbai by ten. The domestic market is pretty much done from Delhi, we have reached where it is possible for us to get to in regards to operational constraints. Now is the time to push for long-haul.”

One of the biggest issues in regards to Delhi’s global hub plan is the vast competition being seen from the Middle Eastern hubs of Abu Dhabi, Doha and Dubai. “We are trying to convince airlines that it is not all in the Middle East. We have worked to develop the airport to make it a truly international facility. The advantages that we have over the likes of Dubai and Abu Dhabi is that Delhi has a much greater catchment area, economic advantage due to the prospering economy of India, and we have a bigger O&D market,” highlights Sengupta. Not only does Delhi have this advantage, but it is also handles 12 million more passengers per annum then Doha, and nearly 18 million more than Abu Dhabi respectively.

The national carrier of Air India is the second largest airline in Delhi (shown below), with the number one being IndiGo. With Air India being the nation’s national carrier, anna.aero’s data elves decided to analyse its most popular connection routes from Delhi. Based on OAG Schedules Analyser data for last year, Air India’s number one connection route via its Delhi hub was between London Heathrow and Amritsar, an Indian city situated 452-kilometres north of Delhi. An estimated 19,500 passengers chose Air India to connect between the two points (one-way) in 2015. Of Air India’s top 12 connections only one, Lucknow to Chennai (highlighted in light green), is an Indian domestic pairing. What is interesting to note is that two routes (highlighted in orange) connect two points outside of India. 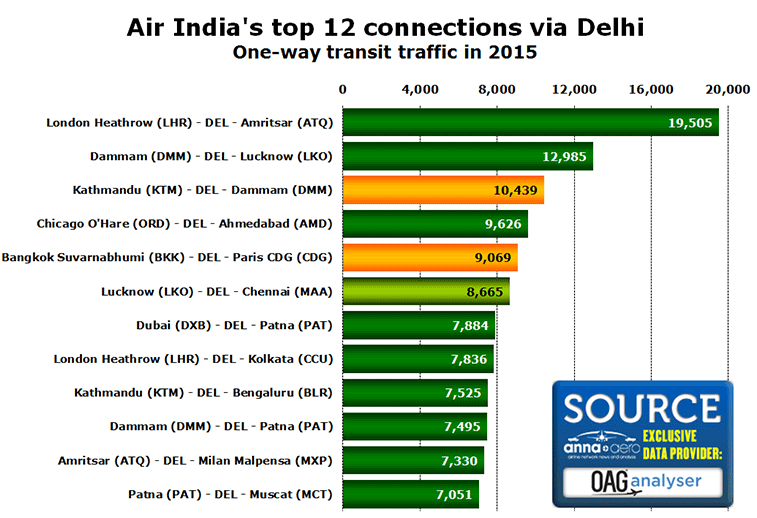 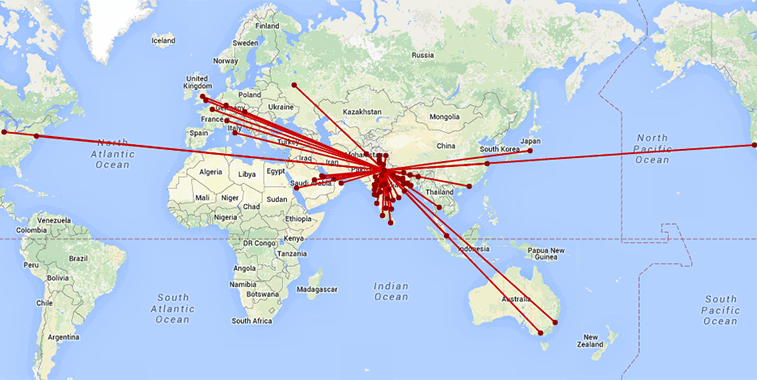 Air India route map August 2016 based on OAG Schedules Analyser data. As can be seen from the map, it is evident that the carrier’s network fits with the airport’s hub strategy in connecting the Indian domestic market, while also attracting Europe to the East and vice-versa flows. This map only takes into account, however, Air India flown routes, and not all Star Alliance member carriers of which India’s national airline is part of.

After recording a growth in capacity of nearly 21% during the past 12 months, IndiGo remains the number one carrier to operate from Delhi. The latest destination that was launched by the carrier from Delhi was to Dehradun, a service which commenced at a thrice-daily frequency. IndiGo now serves 32 destinations with non-stop service from Delhi, of which only two are outside of India (Dubai and Kathmandu). The carrier which recorded the best growth in relation to the airport’s top 12 airlines is AirAsia India, which has grown its capacity from the Indian capital by 44%. One factor contributing to this growth is the launch of services to Visakhapatnam from Delhi on 20 November. One of the airport’s top 12 airlines is reporting a decline in capacity, with JetKonnect (highlighted in light green) down by nearly 28%. What is interesting to note is that Emirates and Etihad Airways, which operate to the hub airports of Dubai and Doha respectively, where Delhi is attempting to compete, have shown steady growth in the past 12 months of 5.0% and 4.9%. 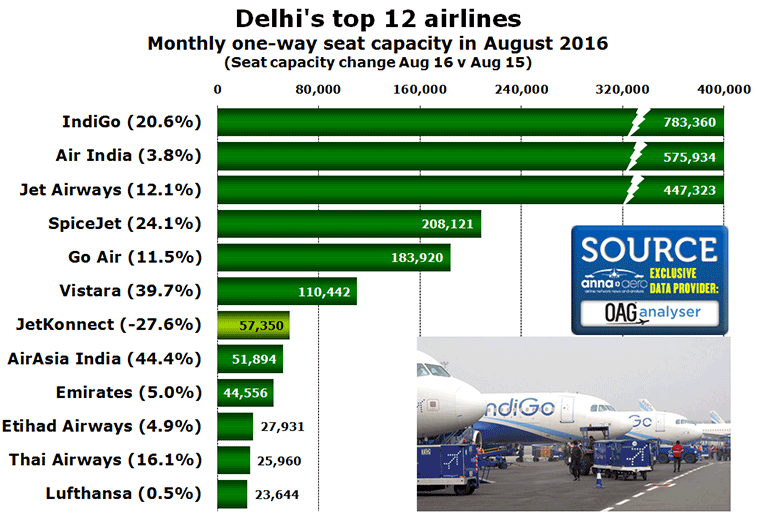 Outside of the airport’s top 12 airlines, one of the biggest increases in seat capacity has come from Saudi Arabian Airlines (17th largest), with the carrier recording a growth of 22% over the past 12 months. Another airline recording an increase in seats is Cathay Pacific Airways (14th), with the oneworld member showcasing a 7.6% increase in seats on its route from Hong Kong.

When asked about its long-haul developments by anna.aero, Singh stated how the airport was in discussions to reopen services to Brussels. “We have seen Jet Airways move its European hub operations from Brussels to Amsterdam, however we are confident to see this service return. Delhi is in discussions with Brussels Airlines and we have pursued them to introduce this service. We are also working mutually with Brussels Airport in order to reinstate this service,” highlighted Singh. Brussels Airlines would indeed be a great fit for the route with its Star Alliance cooperation with Air India, allowing for connectivity options to the vast part of the Indian subcontinent and indeed Asia. 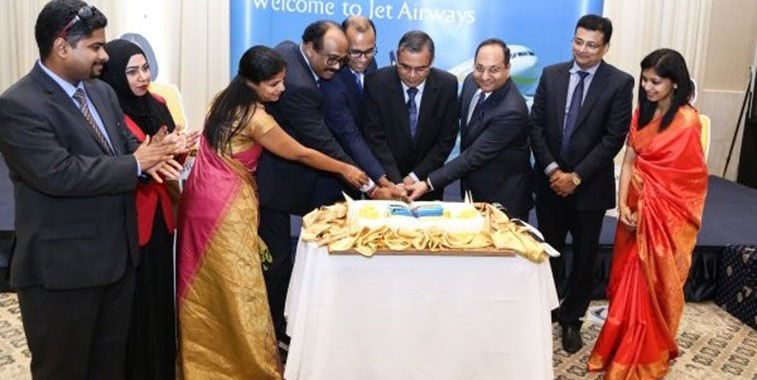 On 21 March Jet Airways inaugurated services from Delhi to Muscat, becoming the carrier’s fourth connection from the Omani airport. Jet Airways is the third largest carrier at Delhi this summer, with it growing its seat capacity from the Indian gateway by over 12% during the past 12 months.