Birmingham-Bangkok is Skyscanner “Unserved Route of the Week” – 420,000 searches is “biggest opportunity yet” 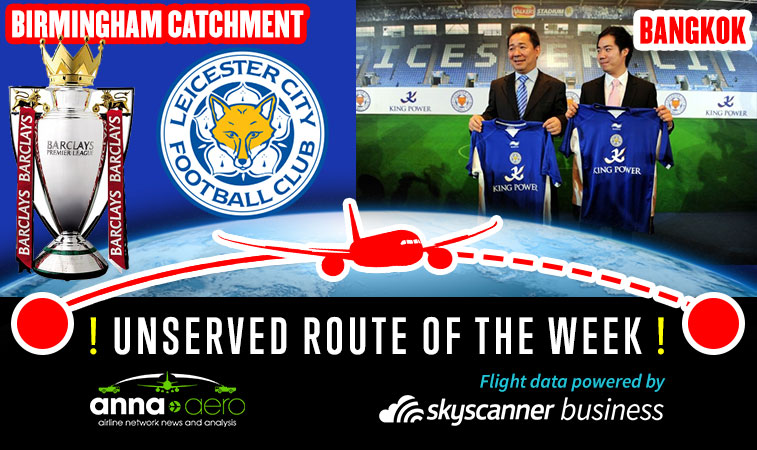 Barely 30 mins from Birmingham (pop. 1.1m), you might have heard that nearby Leicester (pop. 380,000) has just been crowned champions of the English Premier League. Leicester City FC also happens to be owned by King Power International Group, Thailand’s leading travel retailer, based in Bangkok. Any bias shown in this article by anna.aero’s publisher, who was born in Leicester “somewhat over” half a century ago, is purely coincidental. (Yippeeeee.)

With a jaw-dropping near-420,000 searches last year, a prospective new route from Birmingham to Bangkok has been identified as this week’s Skyscanner for Business-anna.aero “Unserved Route of Week” – a powerful analysis based on aspirational data captured from the Skyscanner.net flight comparison site used by +50 million unique visitors per month. Joking aside, it’s not impossible that this already massive demand – the biggest opportunity we have uncovered yet – could now be flooded with football-mad Thai fans flocking to the UK Midlands to watch their Thai-owned club take part in the Champions League next season. 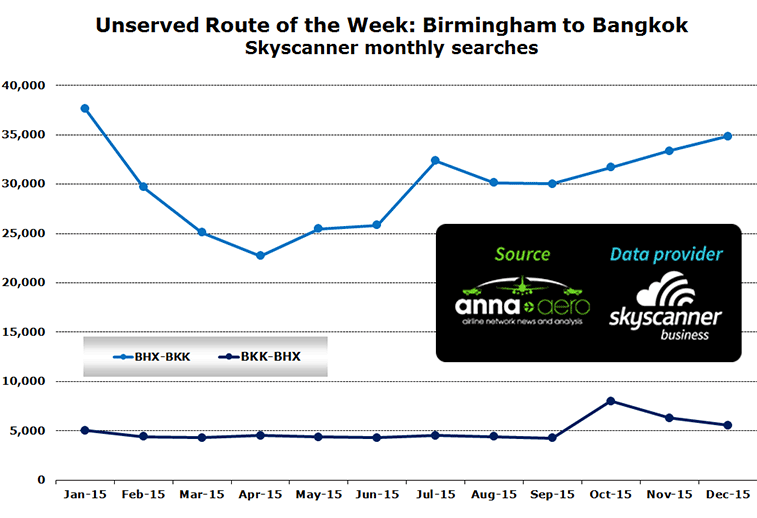 But, for the time being, the Skyscanner stats show that far more demand originates from the UK end of this route ‒ an overwhelming 86/14 split ‒ although anna.aero still thinks the route looks like an obvious candidate for Thai Airways. Currently this flag carrier offers 61 destinations from Bangkok, although its only UK service is to London Heathrow (12 times weekly; 5,300 weekly seats). Across the rest of Europe, the Star Alliance airline has a reasonable network footprint of 71 weekly frequencies, serving Frankfurt (12 times weekly), Munich and Paris CDG (both daily), Copenhagen and Stockholm Arlanda (both six times weekly), Zurich and Oslo Gardermoen (five times weekly), Rome Fiumicino and Milan Malpensa (both four times weekly) and Brussels (thrice-weekly). The offer to these European destinations has been pretty static for some time, although the carrier was mooted to have been considering a four times weekly 747-400 service to Düsseldorf, starting in December 2014… but this route ‒ to a city which has many industrial comparisons to Birmingham ‒ never came to fruition.

Another great reason to start a route – the British-Irish Airports EXPO, hosted by Birmingham Airport at the next-door Birmingham NEC, is the BIGGEST-EVER airports exhibition and conference the UK has EVER seen: Over 130 exhibitors and over 1,500 pre-registered delegates are coming to see a speaker line-up including the CEOs Flybe and of Monarch Airlines and the airport CEOs of Birmingham, Dublin, Manchester, Gatwick, Highlands and Islands, Belfast City, Shannon, Cardiff + many, many more. The Expo will also host the AGM of RABA (The Regional and Business Airports Group), the new voice for 32 airports under 3 million. Be there: 8-9 June 2016.

Still considering the Thai end of the route, EVA Air is another potential operator, as three of its European services – namely to Vienna (four times weekly), London Heathrow (daily) and Amsterdam (thrice-weekly) ‒ all use Bangkok as a transit point, although its remaining European services (to Paris CDG and Istanbul Atatürk) are served direct from its Taipei Taoyuan hub. Services to Turkey were launched only two months ago, so clearly the European population centres are being considered as growth opportunities for the Taiwanese carrier.

When looking at the last year of searches, the busiest month for potential traffic flows (for both directions on the route combined) is January 2015 with nearly 43,000 searches, over 15,000 more than the lowest monthly figure, which was recorded in April 2015 (27,000). The seasonality profile of this search data is less extreme than last week’s Unserved Route of the Week (Kraków-Geneva), with the low-month traffic representing 64% of the highest month. According to OAG Traffic Analyser, because there is no direct service, the top three connecting options chosen by those passengers who did book travel between Birmingham and Bangkok in 2015 were Dubai with 55% of the transfer (unsurprisingly as Emirates operates thrice-daily to Birmingham) followed by Delhi (15%) and Ashgabat (10%). In total, 18 different airports were used by connecting passengers as intermediate points between the two cities and, with the recent arrival of Qatar Airways at Birmingham last month, it will not be long before Doha is surely added as a front runner to this list of connecting airports.

An O&D that is not served by a non-stop flight will typically display a low purchase rate and low traffic. In this instance Skyscanner’s Travel Insight indicates a monthly average of just 11.6% for the Birmingham to Bangkok route (see graph below). Therefore, if there was a Birmingham to Bangkok route, and if bookings performed in line with the “Skyscanner market average” for direct services at both airports (12%), the airline operating this route could immediately expect an improved purchase rate of 3% without any increased marketing spend. However, with over 400,000 annual searches, the potential city pair should already be solidly sustainable. 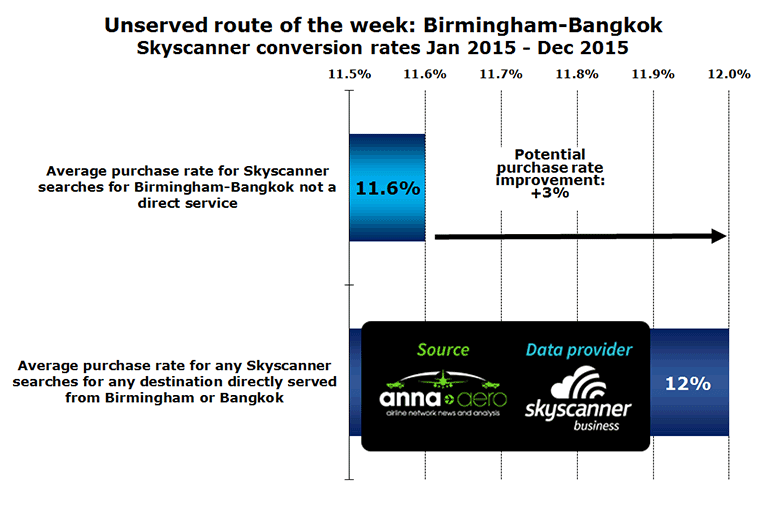 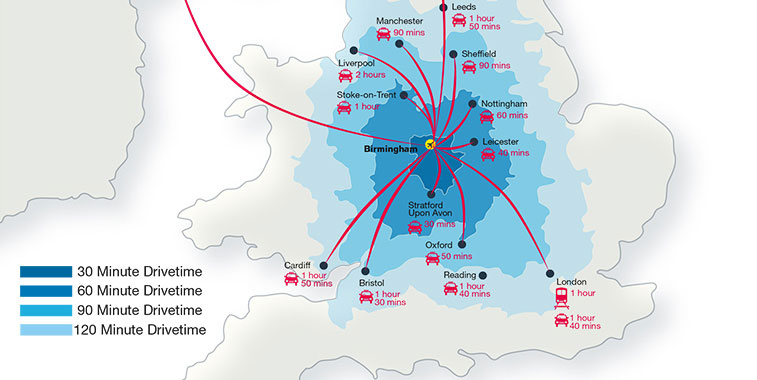 Thai Airways is anna.aero’s favourite for a Birmingham-Bangkok route. The carrier considered starting a four-times weekly service to Düsseldorf in 2014 but the route never materialised. Significantly, Birmingham has many comparisons to Düsseldorf as a major centre surrounded by a dense industrial conurbation of many other big-population cities.