Despite an 03:00 alarm call (the downside of living some 90 miles from London Gatwick), anna.aero’s Chief Analyst was looking reasonably alert when he checked in at 06:43 for his WestJet flight to St. John’s on Sunday 8 May. Having already pre-printed his boarding pass at home, he still had to collect and affix his own bag tag to his hold luggage. It’s worth noting how WestJet’s corporate colour palette goes very well with that of host airport London Gatwick. 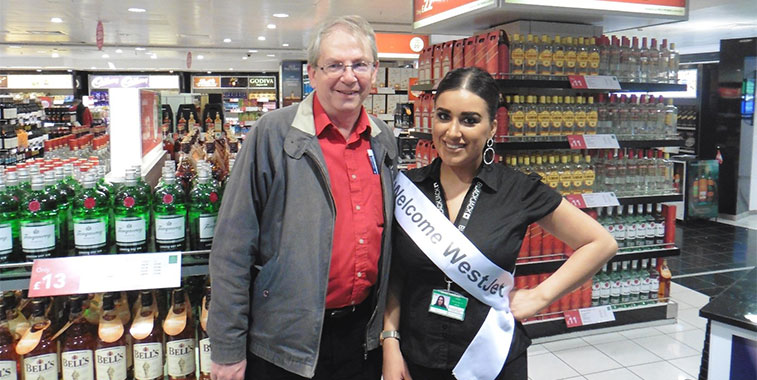 As one of the first 25 passengers to check in for his flight (not too difficult since there were only 48 passengers on the inaugural flight), Anker received a voucher which could be exchanged for a goody bag at the World Duty Free shop in the departure lounge of the North Terminal. This comprised some sweets, a child’s London-themed baseball cap, a 5cl bottle of William Chase Elegant Crisp Gin and a 5cl bottle of Chase English Potato Vodka. 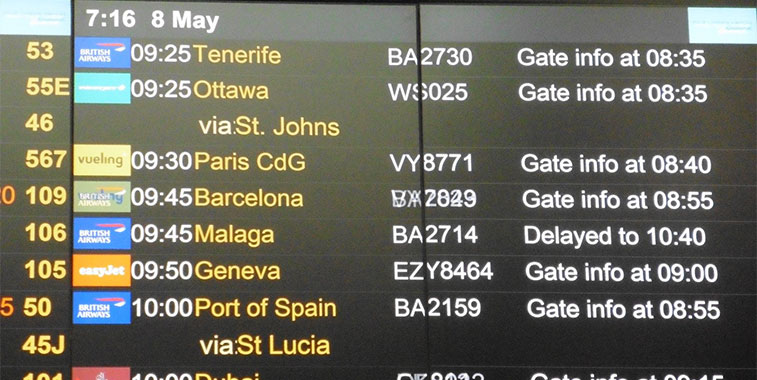 Airside a good two hours before departure, Anker was curious to note that flight WS025 was being displayed as going to “Ottawa via St. John’s”. At Gate 51 a couple of hours later the FID screen was only showing Ottawa as the destination. Hopefully that didn’t confuse too many passengers. 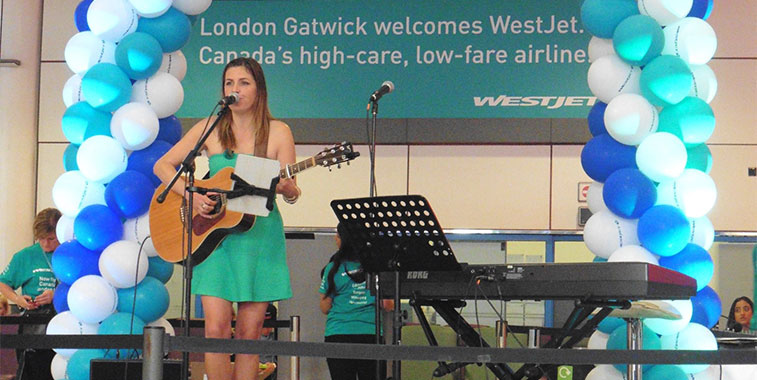 Despite launching its inaugural flights on Saturday 7 May from London Gatwick, WestJet was still providing entertainment on the Sunday. Nikki Loy performed a number of classic hits from Canadian artists such as “I’m like a bird” by Nelly Furtado, “Big yellow taxi” by Joni Mitchell, “Ironic” by Alanis Morissette and “Everything I do, I do it for you” by Bryan Adams. Anker was unable to confirm whether she also sang hits from the likes of The Barenaked Ladies, Justin Bieber, Michael Bublé, Celine Dion, Drake, Carly Rae Jepsen, Avril Lavigne, Shawn Mendes, Nickelback or Shania Twain, all of whom, of course, are also from Canada. 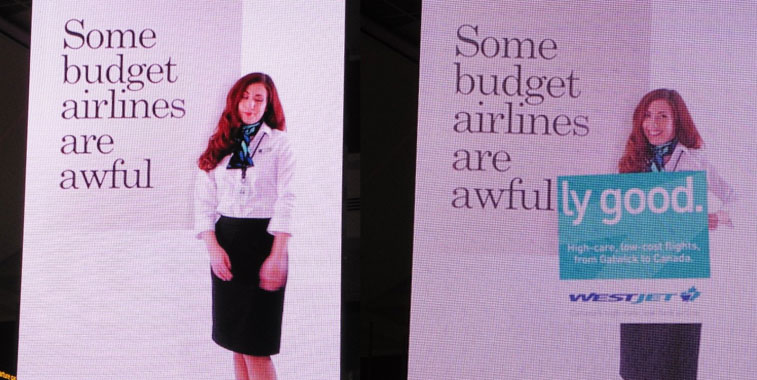 The airport’s giant advertising video screens were helping WestJet to promote themselves to all passengers in the North Terminal on Sunday morning. On hand (literally) to provide entertainment during the morning were members of the Calgary Stampede, an illusionist and some stilt walkers. Passengers on WestJet flights could also get a free picture of themselves taken against a green screen onto which various Canadian images could be placed. 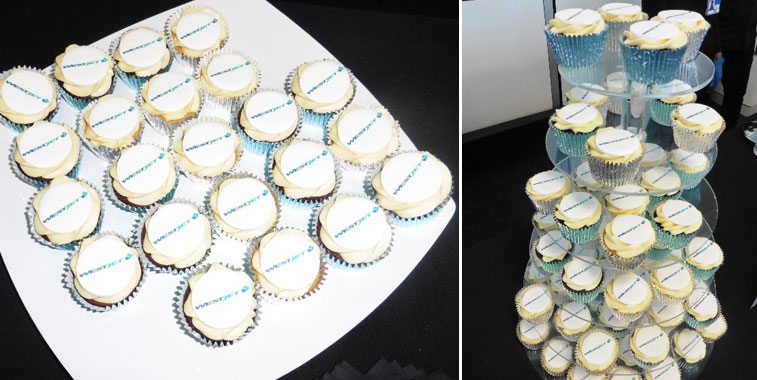 There were two flavours of WestJet-branded cupcakes available at Gate 51 for departing passengers, chocolate and vanilla. Anker can confirm that the chocolate ones were extremely tasty. 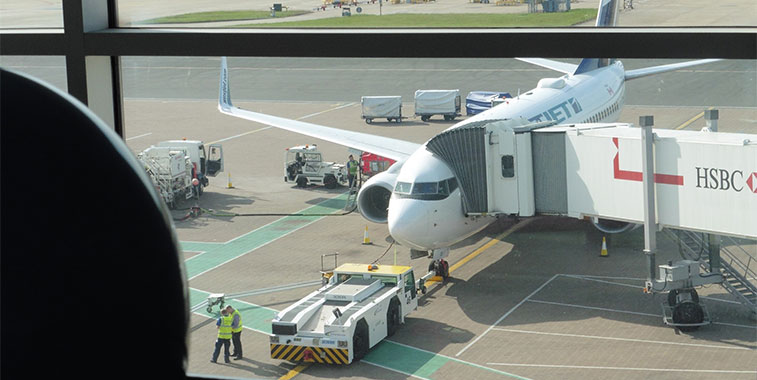 While all the other destinations launched by WestJet from London Gatwick are served by the airline’s wide-body 767s, the daily St. John’s service uses a 130-seat 737-700 LR. Before pushback, the St. John’s flight was joined at a neighbouring gate by one of WestJet’s 767s which had just arrived from Calgary. WestJet will be operating four flights per day from Gatwick this summer to six destinations. 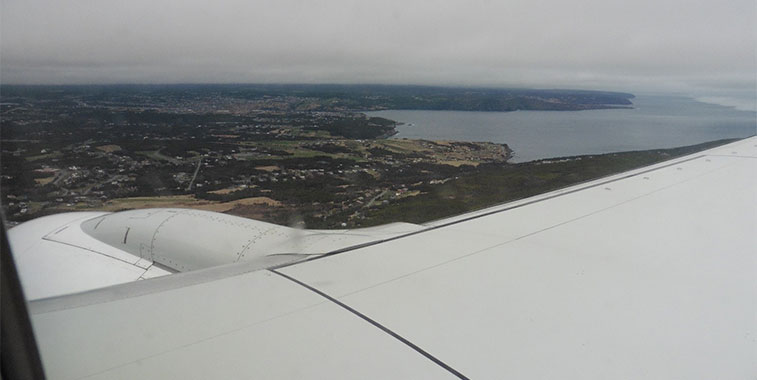 Nearly there! After a flight that lasted just five hours (not including pushback and taxiing at Gatwick) flight WS025 prepares to land at St. John’s in slightly damp conditions. Disappointingly there was no water arch salute on arrival. Anker had even selected a window seat to make sure he would get good pictures. Onboard there were no TV screens to follow the flight’s progress and no seatback screens for in-flight entertainment. Anker spotted passengers sleeping, doing Sudoku puzzles, watching movies on their own devices and several going all retro and reading an actual book. Water and pretzels were provided free of charge, but the available menu for purchase was fairly limited. Meanwhile Anker had bought a couple of sandwiches from WH Smiths (Boots had run out of food for some reason) to eat onboard and used his laptop to write about some of this week’s new airline route launches. Having selected seat 13F he was lucky enough to find that 13D and 13E were empty, making for a comfortable and relaxing journey. 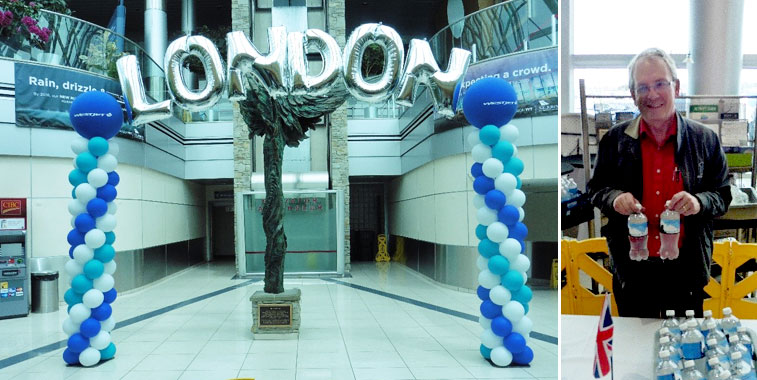 “Rain, drizzle & London”. We’re not sure you’re supposed to combine the words in the banner advertisement for St. John’s terminal expansion with WestJet’s newest destination from the airport, but in some ways it makes a lot of sense. In a curious twist that Alanis Morissette might indeed find ironic, it was the Newfoundland weather that delivered rain and drizzle on Sunday afternoon as Anker disappeared up the Trans-Canada Highway (with his two free bottles of route launch water) in his hire car to see what Newfoundland has to offer visitors.