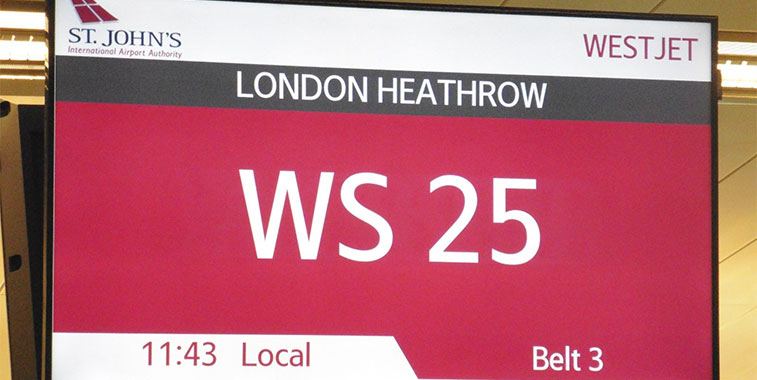 Spot the deliberate mistake. WestJet’s inaugural inbound service from London to St. John’s on 8 May was actually from Gatwick and not from Heathrow. Air Canada operates daily flights between St. John’s and London Heathrow meaning that Newfoundland passengers now have a choice of carrier to the UK.

St. John’s International Airport is the busiest in Newfoundland, Canada and it is the closest major airport in North America to Europe. This week saw the airport welcome a new transatlantic service when WestJet began daily, seasonal flights to London Gatwick, complementing Air Canada’s existing daily service to London Heathrow. Thanks to the sector length of just over 3,740 kilometres, both airlines operate narrow-body aircraft on the route.

Handling around 1.5 million passengers annually, St. John’s has reported traffic growth in eight of the last 10 years, though 2015 was not one of them. However, last year was still the airport’s second busiest ever. The airport is currently extending the terminal building as it hopes to be handling two million passengers by 2020. 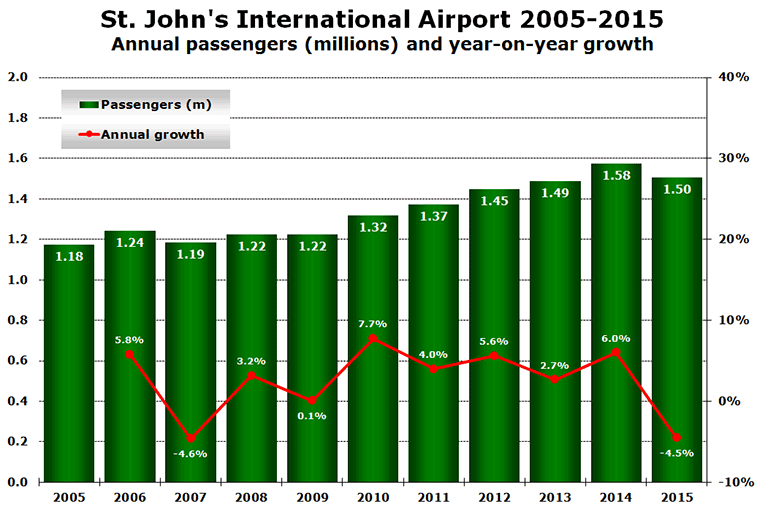 The airport’s seasonality profile is very steady. Last year’s demand meant that the airport’s SVID (Seasonal Variation In Demand) score was a “good” 6.35. This compares with 7.49 in 2014 and 5.38 in 2013, highlighting that 2014’s record-breaking year was mainly down to an increase in summer traffic, thus raising the airport’s SVID score. Traffic peaks in July and August when passenger numbers are around twice as high as in the off-peak months of January and February. 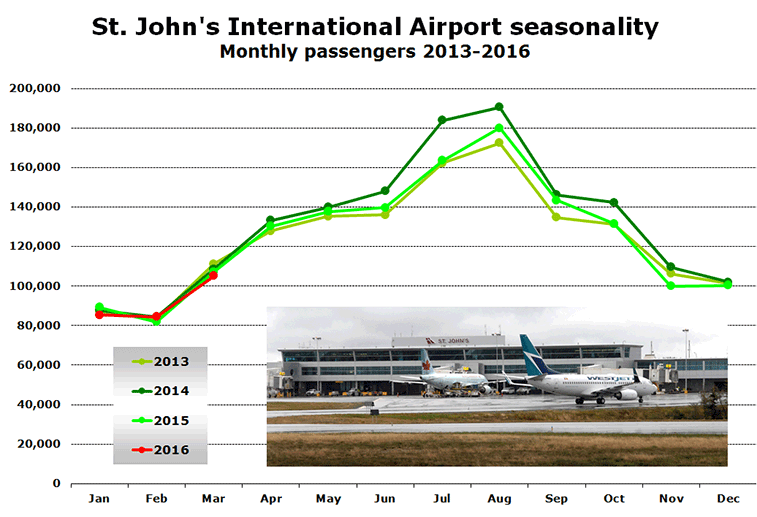 OAG schedule data for August 2016 reveals that, not surprisingly, Air Canada and WestJet are the two leading airlines at the airport. Air Canada accounts for 54% of flights and 48% of seats, while for WestJet the corresponding figures are 24% and 35%. The Canadian national carrier serves seven domestic destinations with non-stop flights (as well as London), while WestJet serves four domestic points, as well as London, Dublin and Orlando.

Provincial Airlines serves three domestic points (including two others in Newfoundland) using its Bombardier turboprops and these account for almost 10% of flights at the airport. The airline’s service to Gander is less than 200 kilometres away. Porter Airlines serves Halifax non-stop with up to three daily flights using its Q400s, while National Airlines has been serving Orlando Sanford since 18 January. Air Labrador begins service to Deer Lake and Goose Bay on 31 May. Halifax and Toronto routes account for 60% of seat capacity

Analysis of OAG Schedules Analyser data for August indicates that the busiest routes from St. John’s, in terms of weekly seat capacity, are to Toronto Pearson in Ontario (a sector length of 2,121 kilometres) and Halifax in Nova Scotia (which is just 879 kilometres away). These two routes alone account for almost half of the airport’s scheduled services and almost 60% of seat capacity. 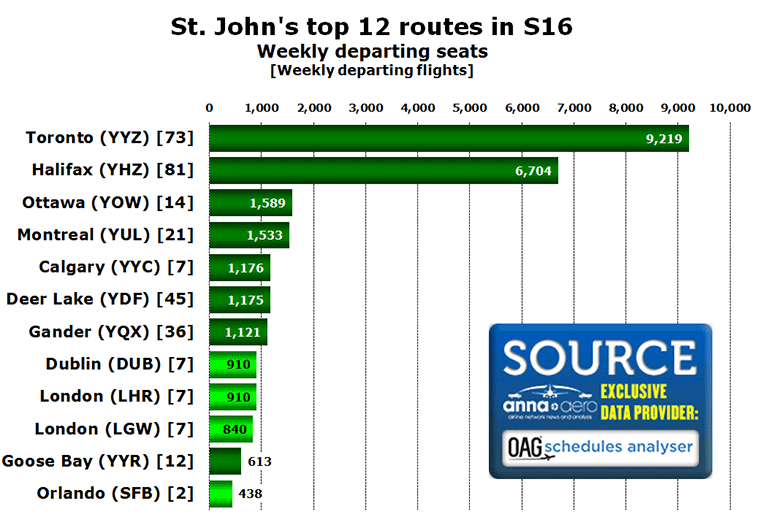 In all, 15 destinations are served from St. John’s this summer with scheduled flights. Last summer, United Airlines operated a daily service to New York Newark, but the Star Alliance carrier terminated the route at the beginning of February. Key factors influencing the decision included the declining value of the Canadian Dollar which provided an unfavourable currency exchange rate with the US Dollar, as well as lower demand for oil-related travel between Houston and St. John’s, via Newark. 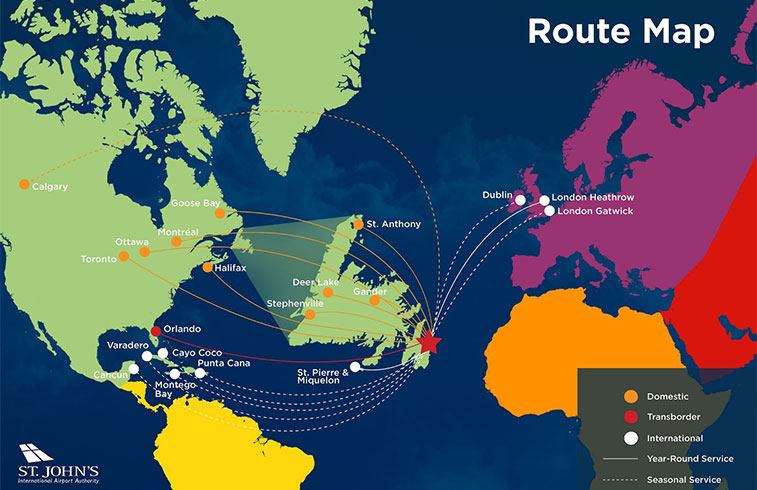 St. John’s route network for S16. Only Orlando is currently served in the US, though the airport is actively seeking to replace the lost United Airlines service to New York Newark which ended earlier this year.