WestJet commenced services to London Gatwick on 6 May. To celebrate, anna.aero commissioned a fantastic cake to welcome the Canadian carrier to its second UK destination after Glasgow. In charge of cutting the cake was: WestJet CEO Gregg Saretsky; WestJet Chairman Clive Beddoe; and London Gatwick CEO Stewart Wingate. Vancouver Airport welcomed WestJet’s first European route from the gateway on 6 May when it launched a six times weekly service to London Gatwick. The airport heralded the start of services with a traditional ribbon cutting ceremony which was conducted by: Gregg Saretsky, President and CEO, WestJet; The Honourable Shirley Bond, Minister of Jobs, Tourism, and Skills Training and Minister Responsible for Labour, Province of British Columbia; and Craig Richmond, President & CEO, Vancouver Airport Authority, with the trio flanked by WestJet crew. The airport also had a fantastic cake to celebrate the new service which showcased the world famous London Tube network. Celebrations were also held at Edmonton Airport as WestJet commenced a twice-weekly (Mondays and Saturdays) service to London Gatwick on 7 May. The airport welcomed the service with an excellent cake, and a gift exchange which was performed by Bob Cummings, EVP of WestJet, and Tom Ruth, President and CEO of Edmonton Airport. The airport also had a ribbon and cake cutting ceremony which was conducted by: Ruth; Maureen McCaw, Edmonton Airports Board Chair; Cummings; the Honourable Mike Lake, Member of Parliament, Edmonton-Wetaskiwin; John Whaley, Mayor of Leduc County; Don Iveson, Mayor City of Edmonton; Greg Krischke, Mayor City of Leduc; and Shaye Anderson, MLA, Leduc-Beaumont. Calgary Airport celebrated the start of WestJet’s services to London Gatwick with a traditional route launch cake, which even included a London bus in WestJet colours. Seen celebrating the launch with a gift exchange are Garth Atkinson, President and CEO of the Calgary Airport Authority, and Clive Beddoe, Chairman of the Board and co-founder of WestJet. The airport also celebrated with a live Beatles tribute act. 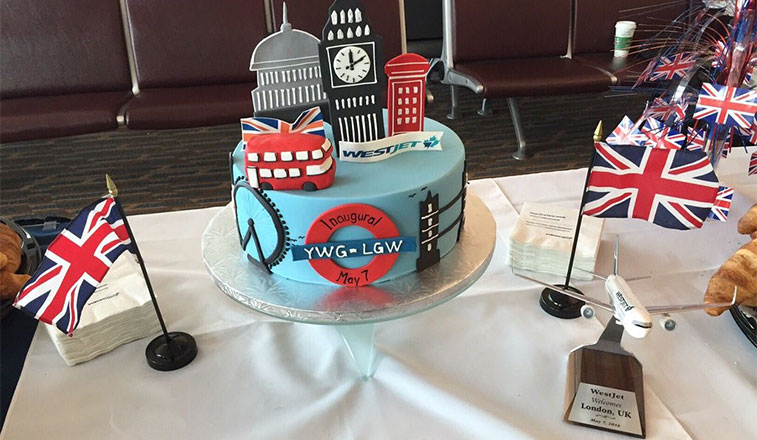 Winnipeg Airport celebrated WestJet’s inaugural service to London Gatwick with a traditional route launch cake. Services on the 6,325-kilometre route to the UK capital will operate weekly on Saturdays. 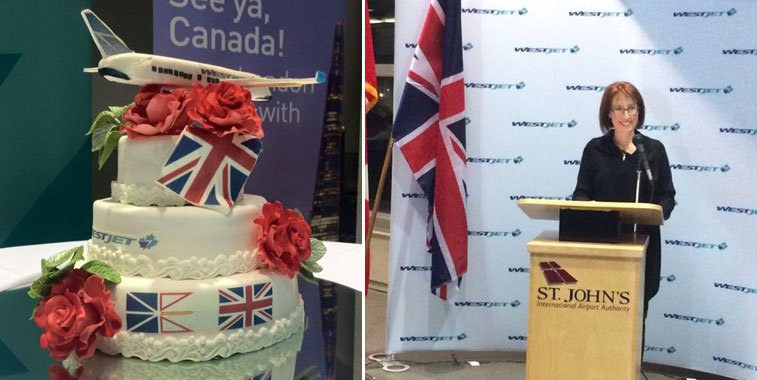 A cake was also created at St. John’s Airport to celebrate the start of WestJet’s daily service to London Gatwick, the only route to London which will be operated by the carrier’s 737-700 fleet. Speaking at the inaugural flight ceremony was Marie Manning, Director – Marketing & Business Development, St. John’s International Airport Authority. Although the airport pair faces no direct competition, Air Canada operates services from the Canadian facility to London Heathrow.