The Budapest Airport-anna.aero Runway Run team were at Routes Europe drumming up interest for this year’s air transport industry annual race, taking place at 11:00 on Saturday 3 September 2016 on Budapest Airport’s runway 13R-31L. Last year saw a record 920 enter the third annual “Race to Find the Fastest Airline in the World.” The anna.aero team fielded the fastest-youngest competitor: Queenie B. Hogan (2) completed the race in a personal best of 47 minutes, just ahead of her elderly dad, anna.aero’s publisher, Paul Hogan.

Over the course of Routes Europe, the Budapest Airport-anna.aero Runway Run team intensively quizzed airline and airport executives to find out just who is willing, ready, able, or just crazy enough, to challenge reigning champions, SWISS and Wroclaw Airport, for the top spots of  ‘Fastest Airline’ and ‘Fastest Airport in the World’.

From experienced marathon runners to weekend joggers, the interest was running high to register for this year’s premier air transport industry charity-sportive event: The Budapest Airport-anna.aero Runway Run, sponsored by Airbus, which takes place at 11:00 on Saturday 3 September 2016 on Budapest Airport’s Runway 13R-31L. Airbus has confirmed it will once again be main title sponsor of this year’s run which comprises two race distances – 10km (four runway lengths) and 5km. Having sent a vibrant team of 13 runners to beautiful Budapest last year, Airbus is continuing its support and involvement in this year’s event in which all proceeds are donated to good causes.

Think you can defeat SWISS and run off with the title of “The Fastest Airline in the World”? Or just need the perfect excuse to get motivated and start running? The air transport industry’s premier charity event could be exactly what you’re looking for. 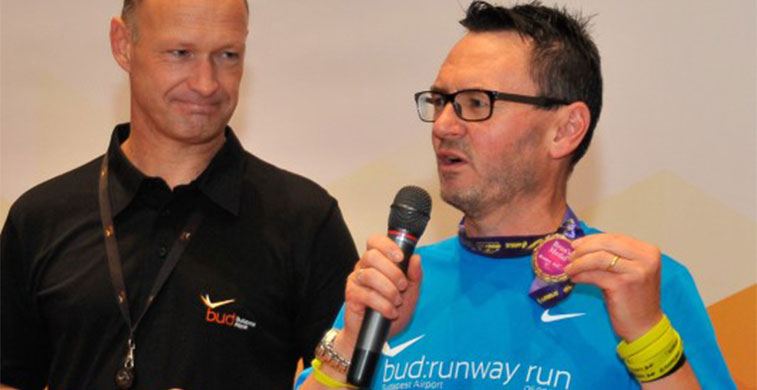 Every finisher receives “The Bron’s Medal” in memory of the anna.aero publisher’s daughter Brontë “Bron” Hogan, who lost her brave battle with leukaemia in 2011.

Right now it costs just €30 to sign up to this unique runway run (entry rises to €50 in July) – all entry fees are donated to the Anthony Nolan charity supporting worldwide bone marrow transplants and a range of other Hungarian good causes.