SunExpress Germany continues its network diversification; Italy in, Tunisia out; Egypt down; Bulgaria up 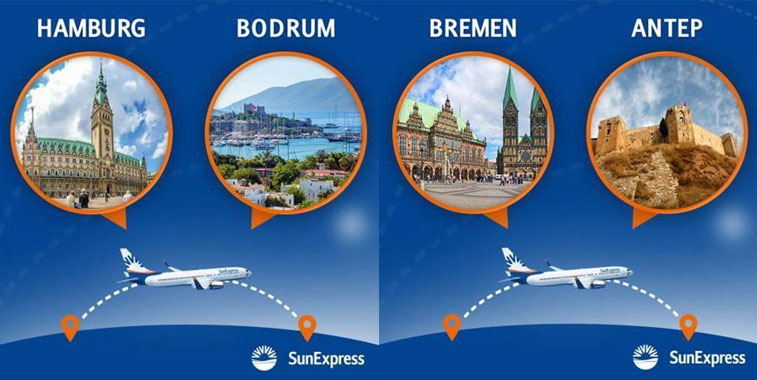 “Gaziantep [shortened to Antep and served from Bremen] with his fortress, the pistachios and baklava is a feast for the eyes and the palate!” That’s the message on SunExpress Germany’s Facebook page promoting this service. While this city pair is bookable on the airline’s website, the Hamburg-Bodrum route, which is also marketed on Facebook, is not. This mild confusion (as far as anna.aero’s data elves are concerned) is testament to the type of operator that the German subsidiary of Turkish airline SunExpress is.

Health Warning! Like so many other European leisure airlines, SunExpress Germany, the subsidiary of Turkish airline SunExpress does not fit neatly into one airline definition box. Taken from the airline’s brochure on its website “The World Of SunExpress”, the joint venture between Lufthansa and Turkish Airlines which was set-up “with the mission of opening up Turkey as a vacation country for German tourism” over 25 years ago, spawned its German offshoot in 2011. “Now with flights to Egypt, Tunisia [not any more], Spain, Greece and even Oman [not this summer], SunExpress is evolving into a diverse and dependable airline for tourists,” its Welcome Aboard page at the start of the document concludes. The result of this diversification means that not all of SunExpress Germany’s operations are scheduled flights, with its full flying programme not comprehensive in OAG schedules data. Therefore, the results of anna.aero’s analysis portrayed here ae representative of the data which is available.

According to ch-aviation, the airline currently operates three A330s, flown on behalf of Eurowings, a deal which was signed last year with Lufthansa, as well as 13 737-800s, two of which are again operated for Eurowings. The remaining 11 aircraft serve 34 destinations, up from 28 in the same week of 2015, following the addition of flights from Paderborn, Bourgas, Gran Canaria, Ibiza, Chania, Palma de Mallorca, Tenerife South, Lamezia Terme and Trabzon, and the withdrawal from Dubrovnik, Istanbul Sabiha Gökçen and Enfidha. Overall, the airline’s weekly seats are down marginally, by 2.3%, year-on-year, due in no small part to the uncertainty of flying into some destinations which had previously been better served. 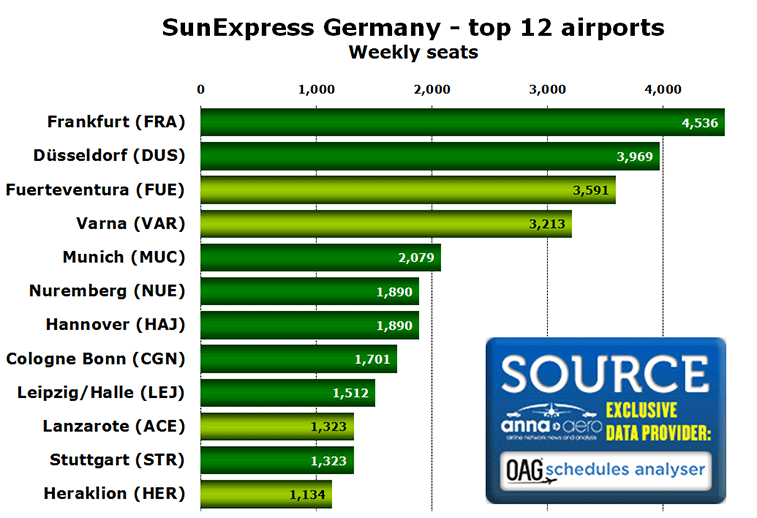 These top 12 destinations represent 73% of SunExpress Germany’s weekly capacity, with four being non-German airports (highlighted in light green). Top of the class in terms of annual growth is Varna, which has risen dramatically (+328%) from just 750 seats last May, with Fuerteventura (+74%) and Nuremberg (+44%) far from sluggish either. Stuttgart has witnessed the biggest decline in capacity over the last 12 months, falling by 56%, with Heraklion (-32%) and Hannover (-29%) also receiving some severe seat culls. Destinations no longer in the top 12, which were present last May were Antalya, Hurghada and Gazipaşa.

Unsurprisingly its home market is SunExpress Germany’s #1 destination country (highlighted in light green), with just over 50% of weekly seats. While the number of markets served remains unchanged at eight versus last May, there have been some slight changes, with Tunisia (Enfidha) being withdrawn completely, and replaced in part with new services to Italy (Lamezia Terme). Looking ahead to August, the airline’s country market profile increases by two, with the addition of Austria and Morocco in the peak season. 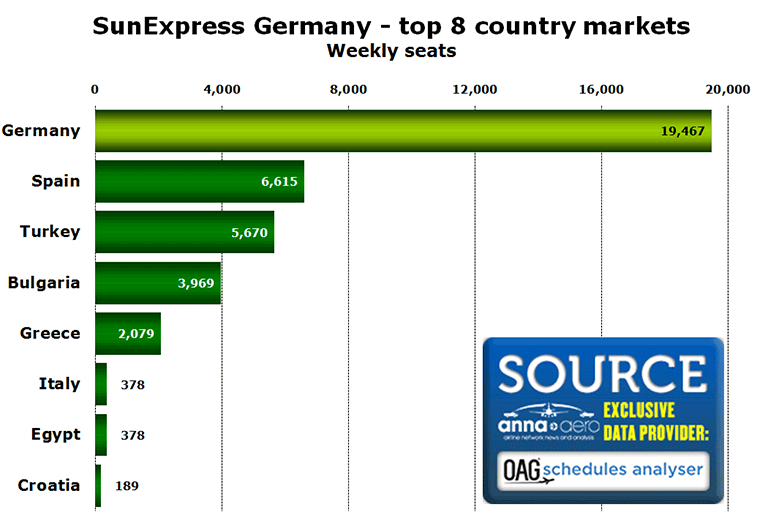 Driven by capacity increases to Varna, and the addition of flights to Bourgas, Bulgaria (+429%) leads the way from Spain (+221%) in terms of year-on-year growth when this week’s seats are compared to the same week in 2015. Along with the removal of Tunisia from the airline’s network, it is not surprising to understand why Egypt has experienced the most significant decline in annual capacity, down 83% from 2,256 weekly seats in May last year. As a testament to the refocussing of SunExpress Germany’s network, Turkey’s importance to the airline has been greatly reduced, with its respective capacity down from nearly 11,000 weekly seats a year ago. 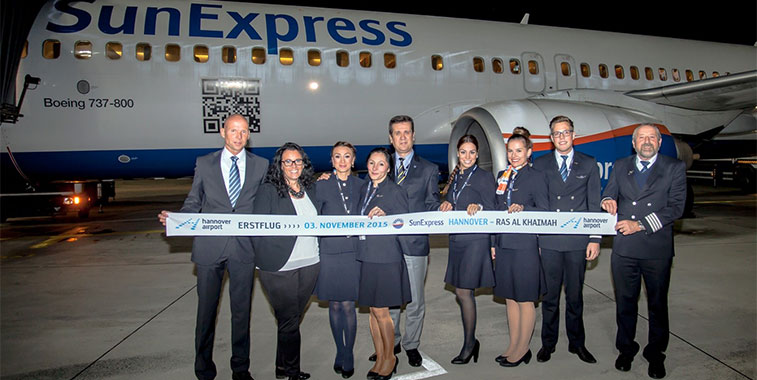 Part of the SunExpress Germany business model are flights for third parties, including this charter service from Hannover to Ras Al Khaimah which launched on 3 November last year.