Latest passenger figures for April for Turkish airports reveals that growth was at its lowest level for almost seven years. Across all Turkish airports demand was up just 1.0% according to anna.aero’s analysis of DHMI figures. Among the country’s major airports, Istanbul Atatürk was up 0.7%, Istanbul Sabiha Gökçen was up 9.9%, but traffic to Antalya was down 26% having been specifically impacted by the withdrawal of Russian business.

Fears about terrorism have irritated tourist chiefs as most travel advisories relate to Syrian border areas well away from the resorts and several hundred kilometers from Istanbul. Traffic figures for each of the last three months have also been distorted slightly by various factors. In February, this year’s extra 29th day should have given all airports an automatic traffic boost of 3.6 percentage points. For popular tourist destinations (such as certain Turkish airports) March would have performed better than usual thanks to Easter falling in that month this year. Conversely, April suffered for not having Easter in it this year.

Because DHMI, the state airports organisation, has revised-down some of the previous year’s figures, the decline in growth is not as concerning as first feared. Indeed, overall passenger numbers are still likely to be up 7.5% for the first four months of 2016. 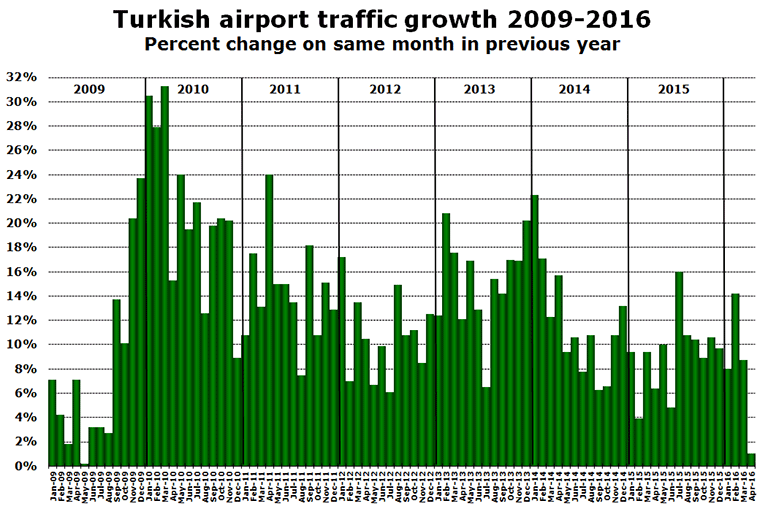