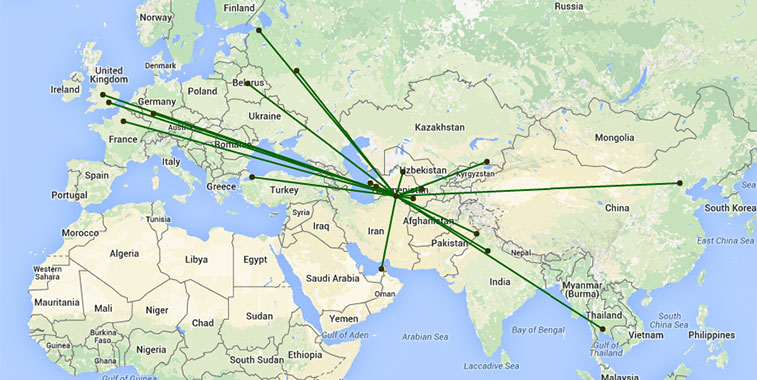 Turkmenistan Airlines’ route map August 2016 according to OAG Schedules Analyser data. During the past 12 months, the airline has not added or stopped service on any route, with the carrier serving the same 19 airports it served in August 2015.

Turkmenistan Airlines was founded in May 1992, the year after the nation became independent upon the dissolution of the Soviet Union. The airline now operates an all-Boeing fleet apart from one CRJ 700. As well as this aircraft, it currently has seven 717-200s, one 737-300, four 737-700s, five 737-800s, four 757-200s (one inactive) and three 777-200s. The average age of Turkmenistan Airlines’ fleet is 10.5 years according to ch-aviation. The airline currently has one operational base, with that being in the capital of Ashgabat.

During the past 12 months, Turkmenistan Airlines’ overall seat capacity has risen by 1.6%, with services between Ashgabat and Dubai witnessing the biggest increase in seats, seeing a growth of 37%. The carrier currently operates a six times weekly service to the Middle Eastern mega-hub on its 737-700 fleet, based on OAG Schedules Analyser data. 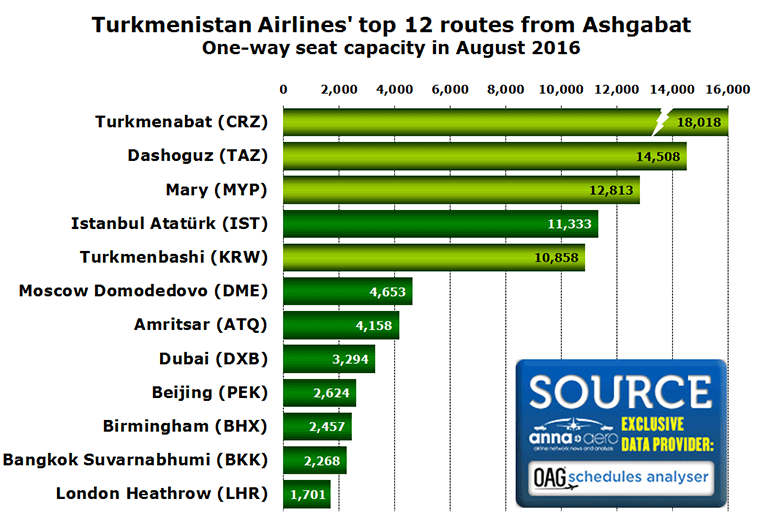 In relation to the 19 routes that Turkmenistan Airlines operates from Ashgabat, four of the top five services (highlighted in light green) are domestic connections, with the number one being to Turkmenabat, in the east of the country. Of these domestic routes, the only one which has taken a cut in capacity in the past 12 months is the link to Mary, which is down just over 14% when compared to 2015. As a result, it has fallen from being the second most popular route to third. The only domestic connection which is served from Ashgabat that is not in the top 12 is Balkanabat (14th largest route), a link which has seen its capacity cut 1.6%. The most popular international route, Istanbul Atatürk, has itself seen a chop in seats, with the sector reporting a decline of 9.4%. Outside of the top 12, the best performing destination is Delhi, with services to the Indian capital seeing an increase in capacity of 23%. As well as the top 12 routes and the two mentioned previously, the airline also serves Frankfurt, St. Petersburg, Paris CDG, Almaty and Minsk from the Turkmenistan capital.

Looking at the airline’s home base of Ashgabat, we can see that the city is geographically well located as a bridging point between Asia and Europe, just like the Middle Eastern hubs of Abu Dhabi, Doha and Dubai. With this fact, anna.aero’s data elves were intrigued to see what the carrier’s connectivity traffic was like. From an analysis of OAG Connections Analyser data, it revealed that the number one connection link for the airline was between Bangkok Suvarnabhumi and Moscow Domodedovo, with nearly 8,500 passengers (two-way) using Turkmenistan Airlines as their carrier of choice between the two points which currently have no direct connection. It should be noted however that Aeroflot does operate to the Thai capital airport from Moscow Sheremetyevo. What is also interesting to note is that one connection pair (highlighted in light green) links to a secondary city in Turkmenistan. 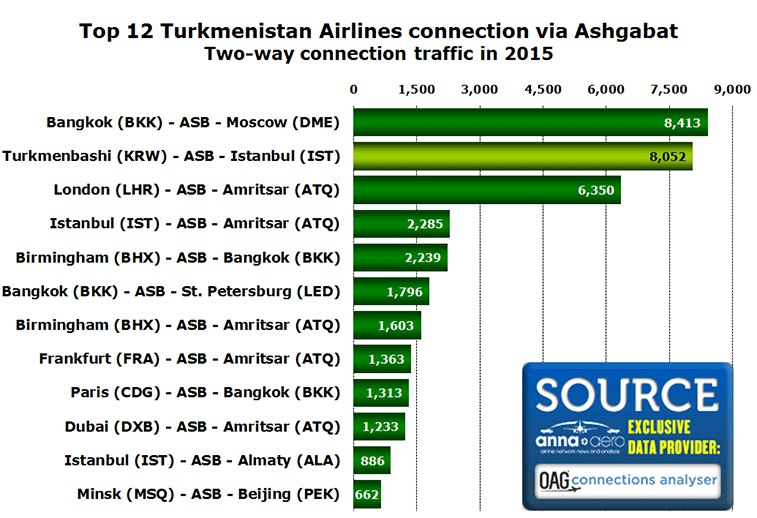 As can be seen from the graph above, Amritsar is the most popular onward point from Ashgabat, with it being the final destination in five of the top 12 connections. One connection to the North Indian airport which has seen a big slump in transit traffic is Birmingham. 2013 data shows that Turkmenistan Airlines handled around 14,000 passengers (two-way) on the link between the two cities via Ashgabat, the year in which Air India commenced services between Amritsar and Birmingham via Delhi, a very popular VFR route. As a result, transit traffic on this routing for Turkmenistan Airlines has dropped by 89% in a two-year period. This factor could also be a reason as to why the airline has decreased its capacity to the UK’s second city by around 30% during the past 12 months. 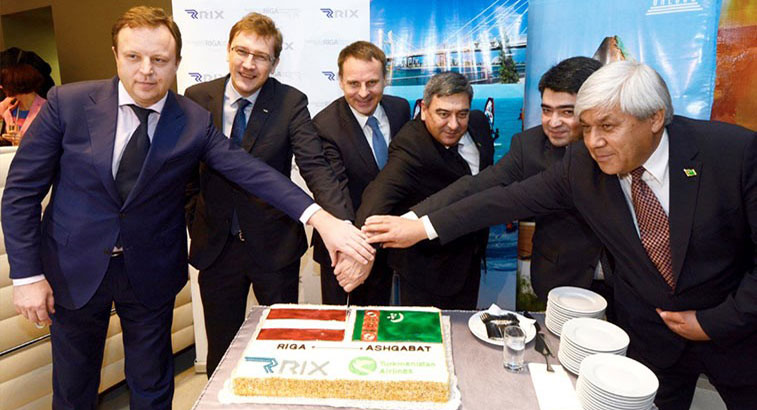 The last routes that were launched by Turkmenistan Airlines were on 12 and 13 May 2015 to Kuala Lumpur and Riga, with the latter airport celebrating with cake. However, both services were pulled shortly after commencement. It should be noted that Riga services were launched on Friday 13, not the best day in which to commence a new route. Unlucky Turkmenistan Airlines!