US airports celebrate their wins in the sixth annual US ANNIES 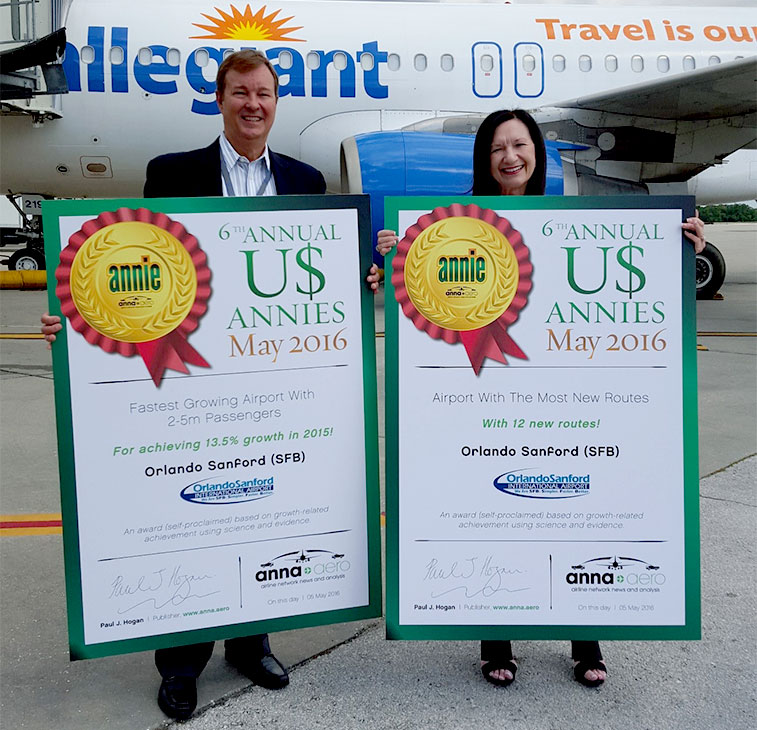 Double-whammy for Orlando Sanford! The airport is this year celebrating its wins in both the Airport Traffic Growth (2m – 5m) and Airport with the Most New Routes categories. Celebrating its achievements are Larry D. Gouldthorpe, A.A.E., President of Airports Worldwide, and Diane H. Crews, A.A.E., President and CEO of the Sanford Airport Authority.

The award season starts at anna.aero this week, with the sixth annual US ANNIES, one of the three annual prize-giving ceremonies we conduct each year (the others being Asian and European ANNIES). The US airline industry has changed considerably over the past 12 months, and the next year looks to be very interesting. We have seen American Airlines and US Airways completing their merger, while it has been announced recently that Alaska Airlines has purchased Virgin America. It will be interesting to see what impact the latter deal will have on US airports this year and beyond. But for now it is back to our awards, probably more awaited by the world’s airport and airline industry than the Skytrax awards, as anna.aero’s data elves dig deep into the data to reveal the winners in seven airport categories this week. The US airline awards will follow next week.

The US ANNIES are based on science, statistics and evidence rather than people’s opinions (and votes). Using OAG schedules data for May 2016 compared with May 2015 across over 630 US airports, our team of data elves have pored over the figures and we think we have come up with a more transparent way of rewarding airlines and airports that have achieved notable route and traffic related success in the US over the last 12 months.

This year’s four main awards are spread across three different states in the US, with two wins for Florida. Nonetheless, of the six airports celebrating success, Florida and Texas see two wins each. All of the airport growth awards are based on actual passenger statistics (according to anna.aero’s American Airport Traffic Trends database) rather than capacity data, making them an even more accurate barometer of which airports have seen the biggest increase in demand. Note: We have changed the top two passenger traffic bands versus last year to ensure a more even spread of airports in each category. 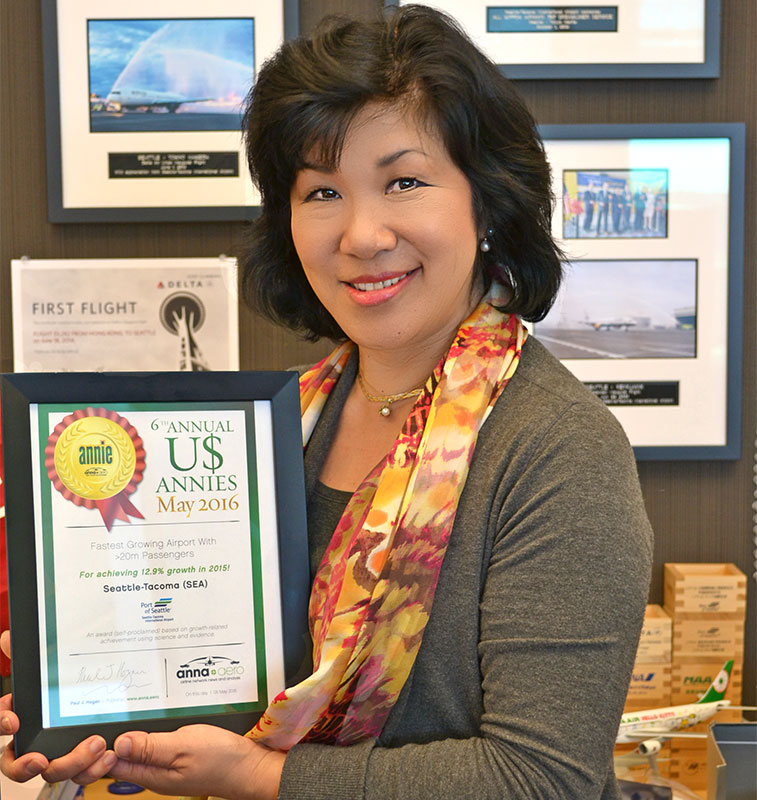 Seattle-Tacoma has done a Tom Hanks and secured the top prize for a second year in a row by being the fastest growing airport in the top category (Tom Hanks won the Best Actor Oscar for his roles in Philadelphia and Forest Gump in 1994 and 1995). Last year the airport won the title in the >10 million category with a 7.7% increase in passenger traffic to 37.5 million. However, the airport has achieved the feat again in the now >20 million category by recording a 12.9% growth in traffic to achieve 42.3 million in 2015. The primary gateway to the Seattle area has edged Washington Reagan into a respectable second place, with the US capital airport showcasing a 10.7% growth in traffic on its 2014 total, with the airport last year welcoming 23 million passengers.

In the 5-20 million passengers category, Dallas Love Field has also done a Tom Hanks in winning the title for a second consecutive year. The Texan facility has achieved a colossal growth of 54.0% during the past 12-month period, with traffic rising from 9.4 million in 2014 to 14.5 million last year. The airport beat-off fellow Texan airport Austin-Bergstrom into second place, with it recording a respectable growth rate of 11.0%, and welcoming 11.9 million passengers last year. Love Field achieved this massive growth due to the Wright Amendment having expired on 13 October 2014. Southwest Airlines has helped contribute to Love Field’s growth in 2015 by growing its summer capacity from the airport last year by 38%. 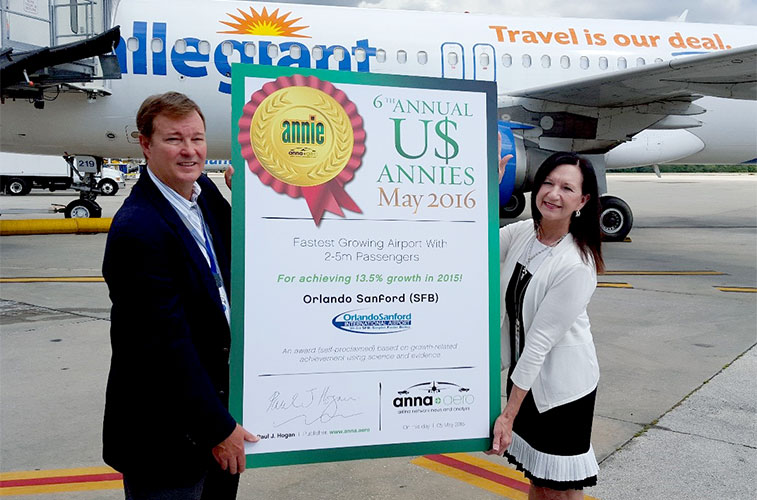 Orlando Sanford celebrates its second win a row in the Airport Traffic Growth 2m – 5m category. Posing with the award in front of the Allegiant Air A320, an airline which has helped the airport achieve this feat, are Larry D. Gouldthorpe, A.A.E., President of Airports Worldwide, and Diane H. Crews, A.A.E., President and CEO of the Sanford Airport Authority.

Instead of saying that Orlando Sanford has done a Tom Hanks, anna.aero’s data elves feel that it has done an Alejandro Iñárritu in this category (Iñárritu won the Best Director Oscar back-to-back in 2015 and 2016 for his films Birdman and The Revenant). Sanford has once again walked away with this award after recording a growth in traffic of 13.5%, resulting in the Floridian airport handling 2.48 million passengers in 2015. It has beaten Grand Rapids Airport in Michigan into second place, which itself has recorded a 9.2% climb in passengers, with it welcoming 2.55 million last year. 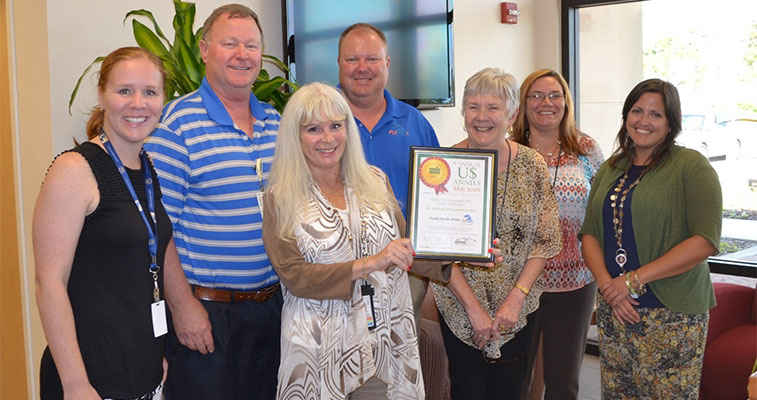 In the smallest airport size category, the standout winner was Punta Gorda Airport in Florida, which last year achieved a 33.2% growth in passengers resulting in a total of 0.84 million for 2015. Coming in a very close second place is St. Pete-Clearwater, which itself achieved a double-digit increase in traffic of 31.8%, meaning it welcomed 1.65 million passengers last year. It might be possible for the latter airport to take this award next year, with Allegiant Air adding to its St. Pete-Clearwater network by introducing services to Dayton and Flint last month.

Airport With The Most New International Routes – TIE!

This year’s winners, both welcoming a total of eight new services each, are Boston and Houston Hobby. All of Hobby’s new routes have be introduced by Southwest Airlines. The latest two international routes launched from the Texan hub were inaugurated in November, when the carrier commenced daily services to Liberia and Montego Bay. However, Boston’s win may be a tad sweeter with it welcoming new international routes from a wealth of carriers. During the past 12 months (between May 16 and May 15) the airport has welcomed new carriers including El Al and its services from Tel Aviv, Norwegian from London Gatwick and Oslo Gardermoen, Qatar Airways from Doha and Aeromexico from Mexico City. 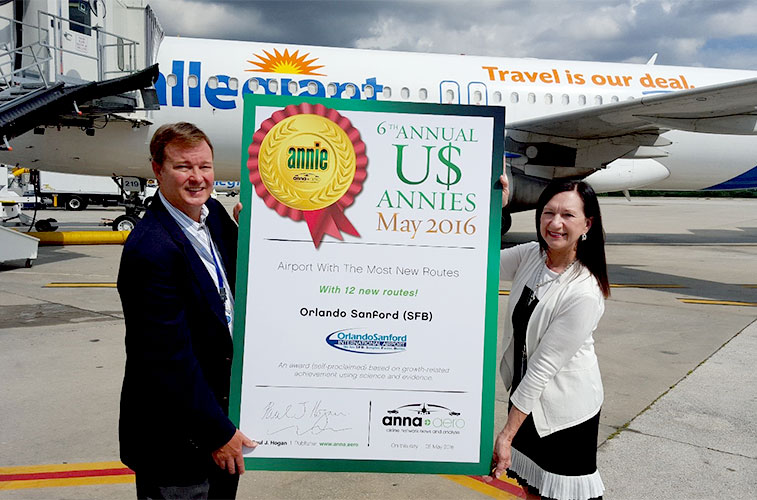 Orlando Sanford picks up its second ANNIES Award this year, a direct result of it running away with the Most New Routes title. Sanford has achieved a net gain of 12 routes during the past year, beating Most New International Routes winner Boston into a respectable second place with its eight new routes. Some of the route launch accolades that have helped Sanford to victory in this category include National Airlines launching scheduled operations from the facility in December, including routes to San Juan in Puerto Rico and Windsor in Canada, plus Allegiant Air adding a wealth of routes including Dayton, Flint and Richmond. The airport has also recently welcomed InterJet and its new service from Mexico City, a sector launched on 21 April.

Boston picks up its second award of the sixth annual US ANNIES by clinching the title of being the Airport With The Most New Carriers. In total Boston has netted a gain of six new carriers from 32 in 2015 to 38 this summer. Its new additions include Aeromexico, airberlin (which launched on 7 May), Norwegian, El Al, Qatar Airways, SAS, Thomas Cook Airlines (services from Manchester launching 30 May), and WestJet. However, the airport has lost services from TACV Cabo Verde Airlines, which moved its operations to Providence, and US Airways due to its merger with American Airlines. Runner-up in this category this year is Los Angeles, with LAX welcoming five additional carriers during the past 12 months which includes Aer Lingus’ new route to Dublin which launched on 4 May.