On 11 March, Indian low-cost carrier IndiGo welcomed the first A320neo into its fleet, with the carrier showcasing its latest aircraft at the India Aviation Airshow in Hyderabad a few days later. Indian government officials, IndiGo and Airbus executives, along with attendees of the India Aviation Airshow witnessed IndiGo’s first A320neo during its appearance on the opening day. Seen on the day of the aircraft’s delivery to the airline in Toulouse are Dr. Kiran Rao, Airbus EVP Marketing and Strategy and Captain Ashim Mittra, IndiGo VP of Flight Operations.

Deliveries during the third month of 2016 between Airbus and Boeing totalled 128 aircraft, 26 units more than the number that was delivered during the second month of this year when comparing the two companies’ performances together. During March, Boeing distributed 71 aircraft, with the European manufacturer garnering a total of 57. The result means that so far in 2016 Boeing has delivered 51 more aircraft than Airbus, increasing its lead by 14 units when compared to last month’s variance between the manufacturers. Boeing’s March delivery total is equal to the sum that it delivered in the same month of last year, while Airbus delivered five more aircraft when compared to March 2015. Overall 73% of deliveries in March were narrow-body aircraft, with the remaining 27% being wide-bodies. Looking at the wide-body market for March, Boeing produced 71% of aircraft (up from 70% in February), while Airbus produced the remaining 29%. 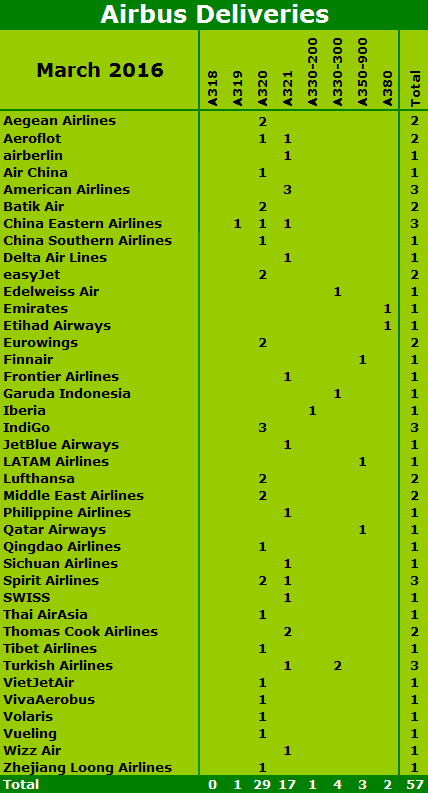 Airbus ended March with a total of 57 unit deliveries, which is 11 more than the figure the company delivered in February, and five more than during the same month of last year. What should also be noted in Airbus’ March deliveries is that for the first time in over a year, no units were delivered to either a cargo airline or leasing company, but all to passenger airlines.

For the month of March, single-aisle deliveries were led by the A320 (29 units – two more than February), while the A321 followed in second place (17 units), and the A319 in third (one), with a grand total of 47 narrow-body aircraft being provided to carriers around the world. This means that Airbus produced one more single-aisle aircraft than Boeing in March. A total of 20 airlines received A320s in March, two more than in February, with IndiGo being the largest recipient of the variant by picking up three. In relation to A321 deliveries, 14 airlines received the type, with American Airlines being the biggest customer by collecting three units. Thomas Cook Airlines was the only other carrier to pick up more than one of the type in March, taking away two. Aeroflot, China Eastern Airlines and Spirit Airlines all collected at least one A320 and A321 last month, with China Eastern being the only carrier to collect an A319, A320 and A321.

Looking at wide-body deliveries, Airbus handed over 10 airframes in March, three more than in February. Following on from the delivery of two A380s in February, the European producer handed over the same amount in March, with one aircraft going to the world’s leading A380 operator Emirates, while the other was bound for fellow UAE carrier Etihad Airways. The best performance of wide-body deliveries in March however was the A330-300, with a total of four being delivered. Turkish Airlines was the biggest recipient of the A330-300, with it collecting two from Airbus. As well as the -300, one A330-200 was received by Iberia. Following on from one A350 delivery in February, three of the type were distributed in March, with one being delivered to the South American carrier LATAM Airlines. 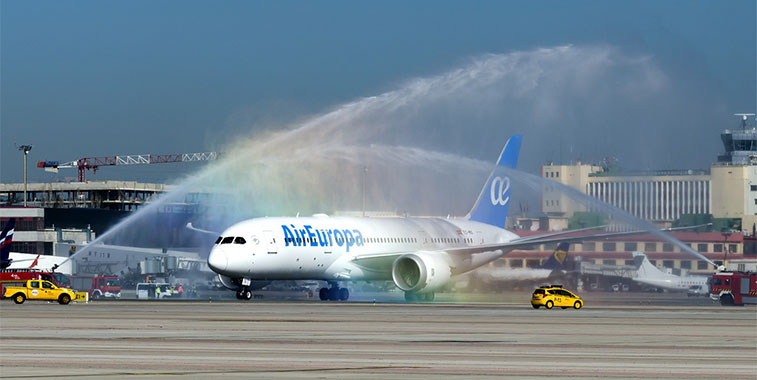 On 15 March Air Europa took delivery of its first 787-8, with the aircraft receiving a water arch salute upon its arrival in Madrid. The carrier currently has eight of the type on order, with it also holding an order for 14 787-9s. 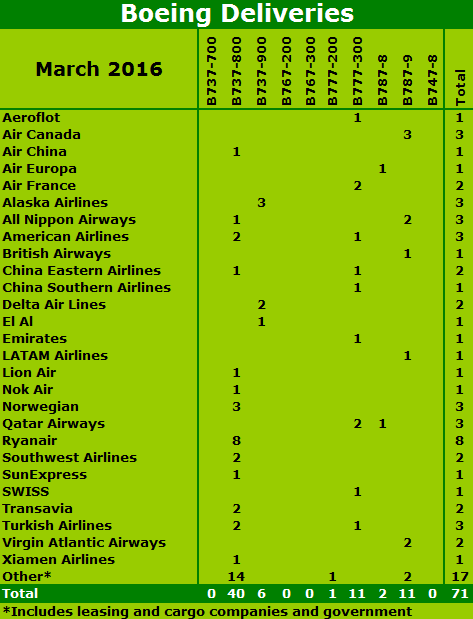 Boeing closed March with a total of 71 unit deliveries, 15 more than in February, and equal to the corresponding month of 2015. Airlines received a total of 46 single-aisle units from the US manufacturer in March, six more than the month previous. A total of 40 737-800s were delivered, while only six 737-900s were received by the world’s airlines. Ryanair was the largest recipient of the 737-800 in March, the same as it was in February, with it picking up eight of the variant. This means that for 2016 Ryanair has already welcomed 24 737-800s. In total, 16 airlines were delivered single-aisle units from the American manufacturer during March, one more than in February. Nonetheless, it should be noted that 14 737-800s were delivered to leasing companies.

An analysis of wide-body deliveries reveals that Boeing handed over a total of 25 units to airlines in March, nine more than in February. Boeing handed over 13 787s in March, three more than in the month previous, and six more than in January. Air Canada was the largest recipient of the 787-9, picking up three of the type, while All Nippon Airways and Virgin Atlantic Airways were the joint second largest customers of the -9, picking up two each. Of March’s 787 deliveries, only two were -8 variants, with Air Europa picking up its first one of the type. The carrier currently has an order for eight of the variant, with it also pledging to take 14 -9s. No 747-8s were handed over in March, the same as in February. The first US manufactured Airbus aircraft took to the skies on 21 March from its facility in Mobile in Alabama. Destined for JetBlue Airways, the maiden flight of the aircraft was flown by test pilots Mark McCullins and Bruce Macdonald, who were accompanied by flight test engineers Thierry Cros and Nick Picconi, and ground test engineers/cabin specialists Alexander Gentzsch and Mike Johns.