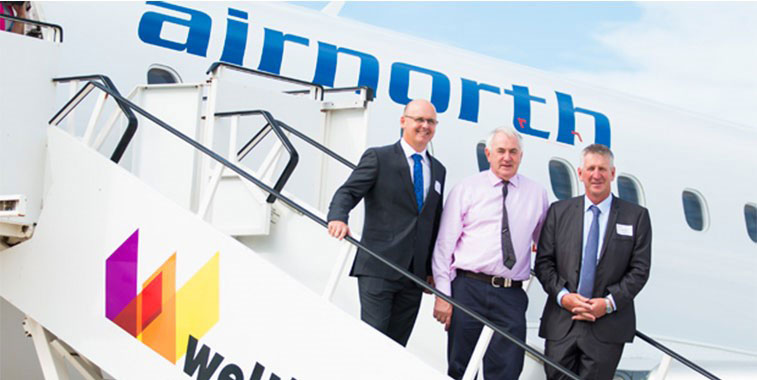 Airnorth started a seven times weekly service between Brisbane West Wellcamp and Melbourne on 14 March. Despite new routes like this, domestic weekly one-way seats at the airport serving the capital and largest city in the Australian state of Victoria are down 2.3% year-on-year. However, overall capacity is up by 0.9% this May versus the same week in 2015.

Currently the second largest airport in Australia, but growing faster than the #1 Sydney (+4.5% in 2015 versus +2.8%), Melbourne serves the capital and largest city in the Australian state of Victoria, and the second largest city in Australasia. Presently served by 30 airlines, this figure has increased by three over the past 12 months, with Scoot, China Airlines and Airnorth added. Unsurprisingly Melbourne is dominated, like most major airports in the country, by Qantas (31% market share of seats), Virgin Australia Airlines (24%), Jetstar Airways (17%) and Tigerair Australia (7%), with these four carriers offering nearly four in every five seats at the airport. 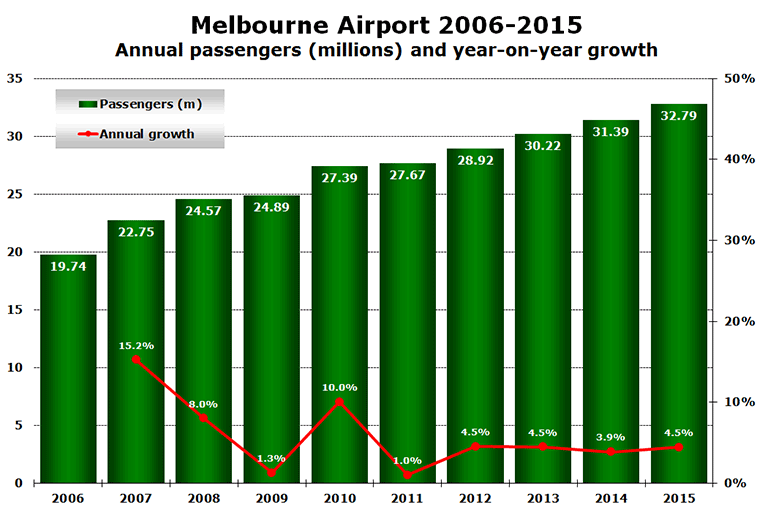 Unlike many airports around the world, Melbourne has managed to ride-out the last global economic recession, maintaining its annual growth even in 2008 and 2009 when numerous other airports failed to deliver positive figures. With two years mustering impressive double-digit growth (2007, 15.2%; 2010, 10%), the average yearly increase was a far from sluggish 5.9% between 2006 and 2015. Looking at 2016 figures so far this year, the airport has provided further robust growth, with January (+6.4%) and February (+8.7%) monthly statistics both up, however traffic increases at rival Sydney have outstripped (January 7.7%; February 10%) those achieved in Melbourne.

Entering Melbourne’s monthly passenger data for 2015 into anna.aero’s Seasonal Variation in Demand (SVID) calculator, the airport performs very well, generating a score of 0.43 ‒ an ‘Excellent’ rating. The airport ranks first out of the 23 airports which have had their 2015 figures analysed, lying ahead of its Australian peers Sydney (0.44) and Brisbane (0.48). Looking at the airport’s SVID result for 2014, Melbourne’s performance has declined in the last 12 months, with its score increasing from the flatter profile of 0.37 attained in the previous year.

In the week commencing 13 May, according to OAG schedules data, weekly one-way seats to Singapore registered the biggest annual growth of the top 12 routes, up 24% year-on-year. New flights from Scoot (four times weekly) and Qantas increasing its weekly frequencies from six to 10, off-set the reduction by Jetstar Airways (down one weekly service) to help produce this overall increase. The only other airport to witness a double-digit improvement in weekly capacity was Cairns, which produced a 15% rise. By contrast another domestic point, namely Perth, encountered the most significant decline in capacity, dropping 20% since last May, presumably driven by the fall in traffic serving the natural resources industry on which the Western Australian airport partially relies upon. However, capacity to all four of the largest Melbourne markets has fallen this May, when compared to May 2015, with #1 route Sydney down by 3.2%, Brisbane by 3.1% and Adelaide by 2.8%. 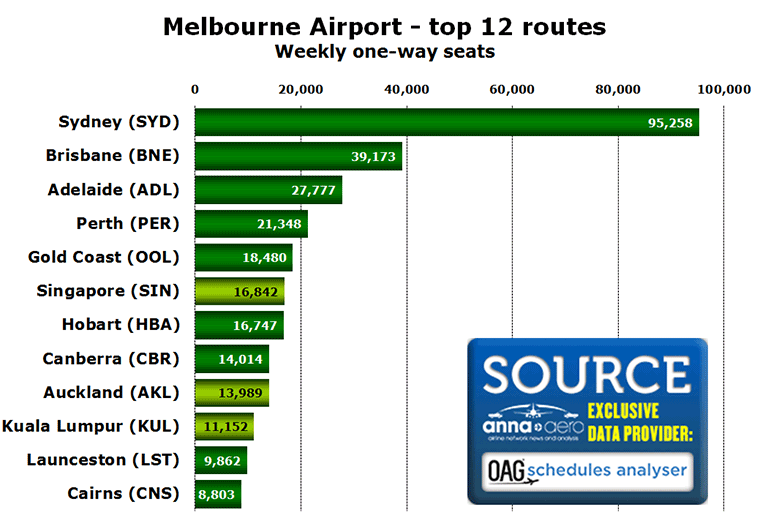 Melbourne offers service to 59 destinations, up from 56 in the same week last year. International routes are well-represented in the top 12 (highlighted in light green), made-up of regional points rather than long-haul destinations. In May 2015, the airport had domestic flights to Mackay (Tigerair Australia), which have subsequently been lost. However, it has gained new routes to Taipei (China Airlines), Beijing (Air China), Brisbane West Wellcamp (Airnorth) and Proserpine (Jetstar Airways) over the same period.

Domestic down while China charges

Melbourne currently offers services to 19 countries, with the top 12 country markets commanding 98% of the airport’s capacity. While overall weekly one-way seats are up marginally by 0.9% against those recorded a year ago, to over 390,000, the #1 domestic market (highlighted in light green) is down 2.3% since last May. However, capacity to Malaysia was down the most inside the top 12, with a 7.0% cull in seats. Despite robust surges in weekly seats from UAE (+29%) and Singapore (+24%), it is China where airline network planners have been busiest adding volumes, with a 40% annual increase. 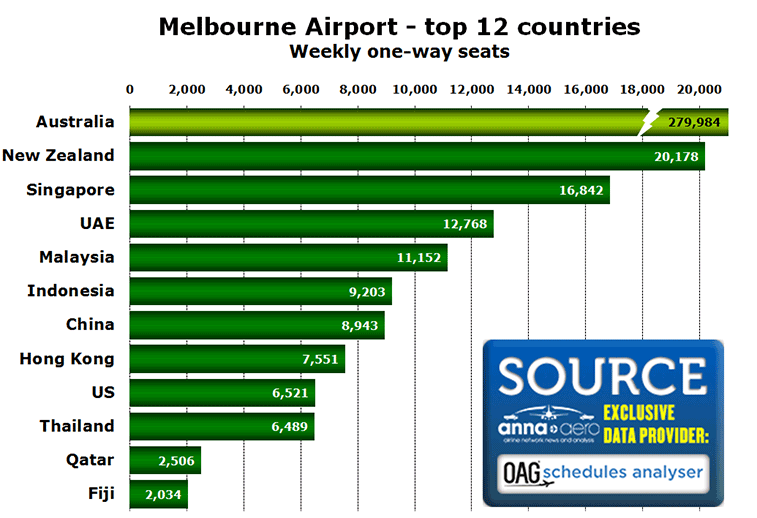 Looking ahead to new routes expected to happen later this year, Melbourne is planning to welcome Xiamen Airlines’ twice-weekly services from Xiamen, its second destination and third route in Australia on 30 June. There were also indications that Beijing Capital Airlines was looking at adding flights from Qingdao this summer, however a quick check of the airline’s website and OAG schedule data reveals that the route is currently not being offered, however, should that situation change, anna.aero will let you know first!

And indeed it has!! Since we posted this article, Beijing Capital Airlines has filed a schedule for its first Australian service, with a thrice-weekly operation from Shenyang and Qingdao to Melbourne beginning on 29 September. Perhaps reading our article convinced them to finally put the route on sale? 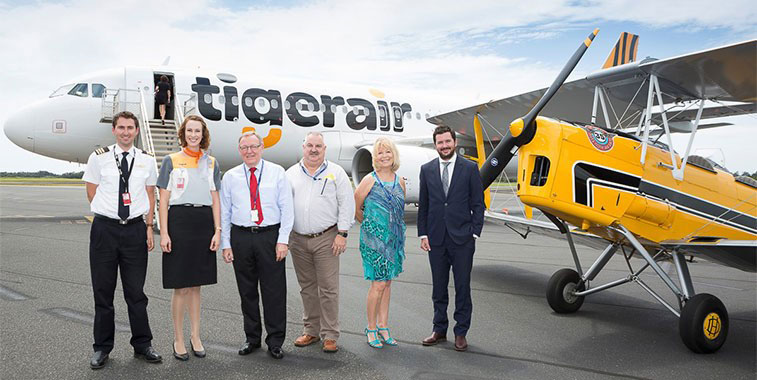 Tigerair Australia launched thrice-weekly services from Melbourne to Coffs Harbour on 9 December last year. Along with the other major players in the Australian domestic market, namely Qantas, Virgin Australia Airlines, and Jetstar Airways, these four airlines command nearly four in every five seats at Melbourne.