Bordeaux-Moscow is Skyscanner “Unserved Route of the Week” ‒ 60,000 searches in 2015; very profitable for Aeroflot? 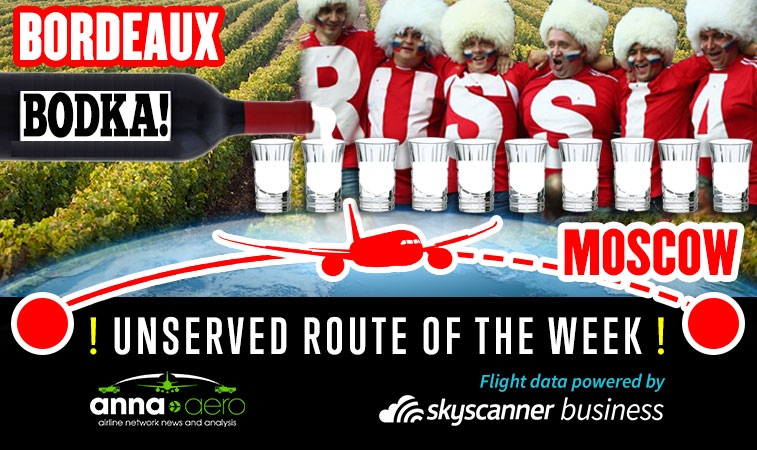 What crisis? While many EU carriers have cut back their services to Moscow, searches on Skyscanner.net by well-off Muscovites provides clear evidence that there is in fact plenty of viable demand: Even with last year’s low in East-West relations, 60,000 wine, beach and chateau-loving Russians searched Skyscanner for ways of escaping to Bordeaux.

With over 60,000 Skyscanner searches last year, mainly by Russians who must clearly have plenty of euros, a potential new route from Bordeaux to Moscow to has been identified as this week’s Skyscanner for Business-anna.aero “Unserved Route of Week” – a powerful analysis based on aspirational data captured from the Skyscanner.net flight comparison site used by +50 million unique visitors per month. 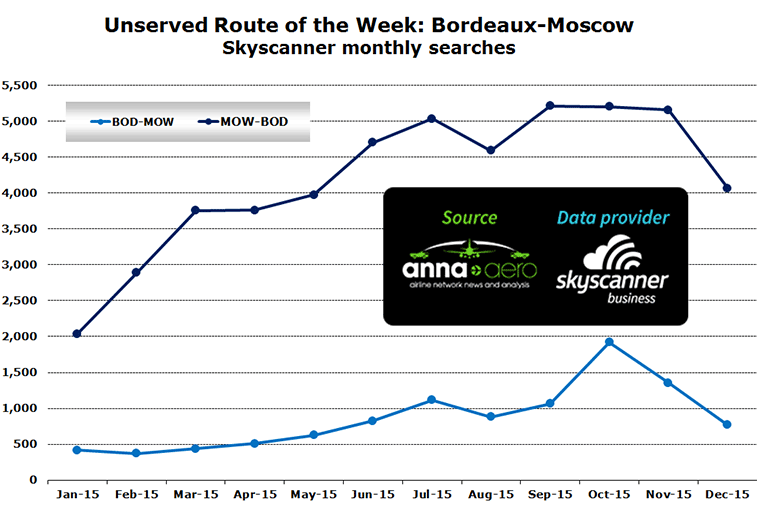 With significantly more traffic originating from the Russian end of this route ‒ an 83/17 split – this city pair looks like an obvious contender for Aeroflot, already the largest carrier by far in the Russia-France market. According to OAG schedules data for the week commencing 16 May, the flag carrier currently offers three French destinations – Paris CDG, Nice and Paris Orly providing 11,000 weekly seats – a 65% market share. The routes are between Moscow Sheremetyevo and CDG and Nice; Moscow Vnukovo and Orly and Nice; as well as St. Petersburg and CDG and Nice. From 1 June the SkyTeam carrier will add a four times weekly service to Lyon, a route that it last served in 2000.

At the Bordeaux end of the route none of the existing carriers look likely to be interested: Air France provides nearly 23,000 weekly seats from Bordeaux, with its regional partner HOP! adding a further 10,000. However, the mainline brand only offers service to Orly and CDG from the airport, with HOP! operating to just seven destinations, of which only one is international – Rome Fiumicino. Unlike the domestic bias of Air France, Bordeaux’s #2 carrier easyJet, does as least offer a wider range of international destinations with flights to Belgium (Brussels), Germany (Berlin Schönefeld), Italy (Milan Malpensa and Venice Marco Polo), Morocco (Marrakech), Netherlands (Amsterdam), Portugal (Lisbon), Spain (Barcelona) Switzerland (Geneva and Basel) and the UK (Belfast International, Bristol, London Gatwick and London Luton) operated. And easyJet did serve the Russian market until 20 March this year, when its services from Gatwick  were terminated due to falling demand blamed on the economic sanctions between the EU and Russia. (It had also previously served Moscow from Manchester)

But despite the political and economic problems, well-off Russians still searched Skyscanner for ways of getting to Bordeaux last year, with the busiest month of searches (for both directions on the route combined) occurring in October 2015 with over 7,100 searches, nearly 4,700 more than the lowest monthly figure recorded in January 2015 (2,500 searches). The seasonality profile of this search data is significantly more extreme than last week’s Unserved Route of the Week (Cairns-Christchurch), with the low-month traffic representing just 34% of the highest month. According to OAG Traffic Analyser, because there is no direct service, the top three connecting options chosen by those passengers who did book travel between Bordeaux to Moscow in 2015 were CDG (56%), Amsterdam (21%) and Istanbul Atatürk (14%). In total, 24 different airports were used by connecting passengers as intermediate points between the two cities.

An O&D that is not served by a non-stop flight will typically display a low purchase rate and low traffic. In this instance Skyscanner’s Travel Insight software indicates a monthly average purchase rate of just 7.4% for the Bordeaux to Moscow route (see graph below). Therefore, if a Bordeaux to Moscow route was launched, and if bookings performed in line with the “Skyscanner market average” for direct services at both airports (10.9%), the airline operating this route could immediately expect an improved purchase rate of 47% without any increased marketing spend! However, with more than 60,000 annual searches, the potential city pair should already be very, very sustainable. 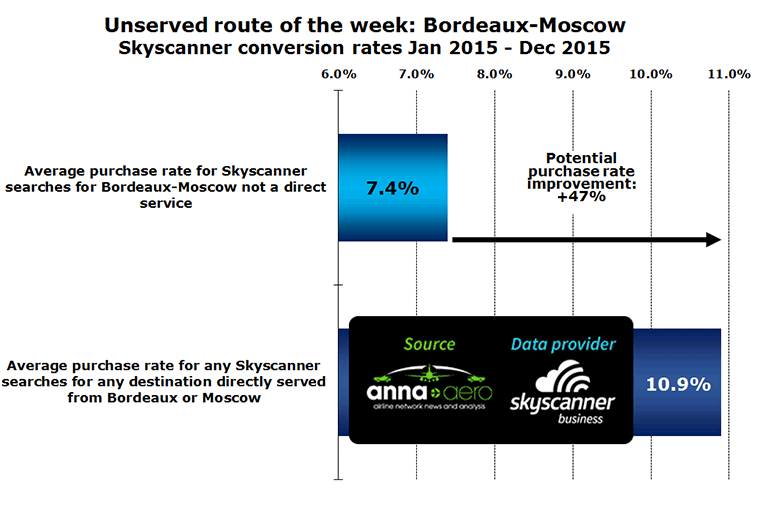