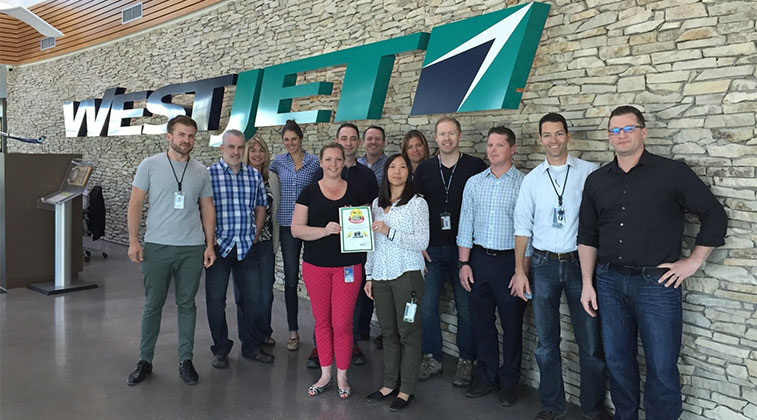 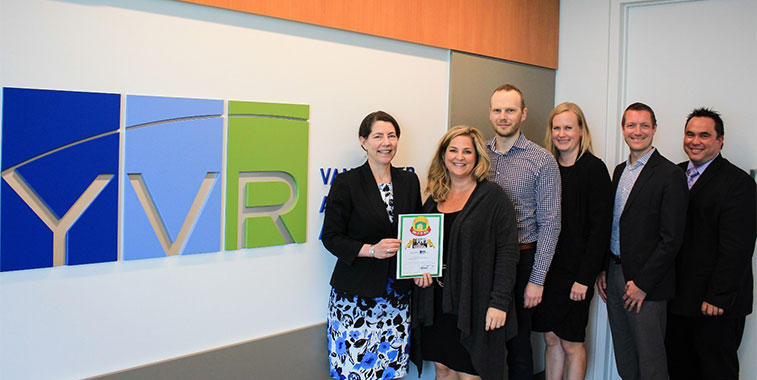 On 5 May United Airlines commenced services between San Francisco and Nashville, with the latter airport celebrating the launch with an inaugural ceremony which included a unique guitar exchange, highlighting the musical heritage of the city and Tennessee, and a traditional route launch cake. Seen taking part in the gift exchange are: Bobby Joslin, Chairman, Metropolitan Nashville Airport Authority; Chris Earley, GM for United Airlines at Nashville Airport; and Rob Wigington, President & CEO Metropolitan Nashville Airport Authority. Bordeaux Airport celebrated the arrival of Iberia Express and its service from Madrid on 12 May, while the first flight by the carrier took place on 5 May. The French airport welcomed the carrier’s arrival with a ribbon cutting ceremony and a three-tiered cake. Seen cutting the cake are Pascal Personne, President of the Board of Directors of Bordeaux Airport, and Alexandra Sabaté, Network Planning at Iberia Express. Services will operate twice-weekly (Thursdays and Sundays) according to OAG Schedules Analyser data. 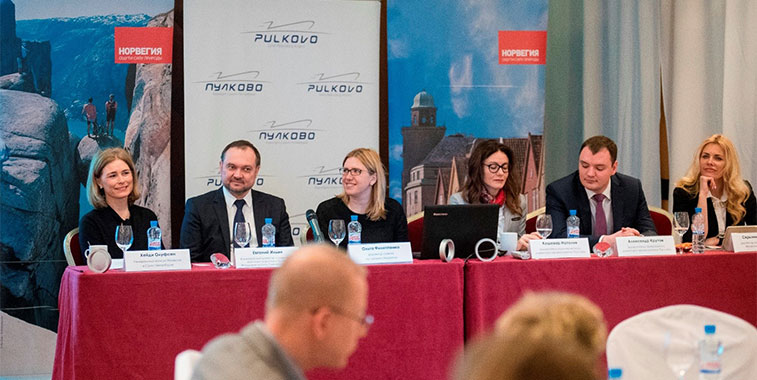 On 11 May RusLine announced that it will commence scheduled services between St. Petersburg and Oslo Gardermoen. Heidi Olufsen, the Consul General of Norway in St. Petersburg, remarked, “We are very glad that direct flights between St. Petersburg and Oslo are to be resumed. Long-standing business and cultural ties connect the Russian city to the capital of Norway, and direct flights will certainly contribute to their strengthening. A direct flight will make it possible for businessmen to use their time as efficiently as possible, and reductions in travel time will allow tourists to spend more interesting days in Norway”. The city pair will be flown by the carrier’s CRJ 200s. 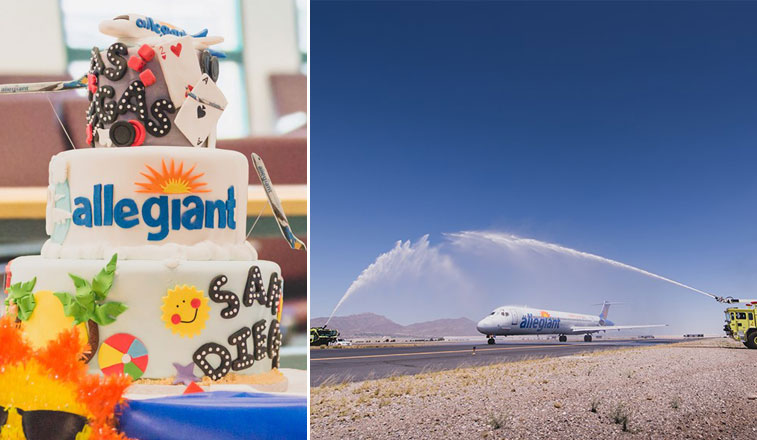 El Paso Airport welcomed the arrival of Allegiant Air recently, with the Texan facility heralding its arrival with a traditional route launch cake, while also greeting the arrival of the first aircraft with a splendid water arch salute. The carrier inaugurated services from Las Vegas and San Diego, while a third route to Orlando Sanford will commence on 27 May. Air Canada launched 787-9 services to Rome Fiumicino on 10 May, the first time that the aircraft type has been used on a scheduled service to the Italian capital, and the first long-haul 787-9 flight for the Star Alliance member. The aircraft was used on the airline’s route from Toronto Pearson, with Fiumicino Airport celebrating its arrival with a traditional ribbon cutting ceremony and cake. Cutting the ribbon are: Fausto Palombelli, EVP Aviation Marketing Development, Aeroporti di Roma; Peter McGovern, Canadian Ambassador to Italy; Umberto Solimeno, GM Italy, Air Canada. Inverness Airport on 3 May welcomed the arrival of British Airways’ inaugural service from London Heathrow, with the Scottish facility welcoming its first flight with this fantastic cake. On 1 May the airline also launched services from Heathrow to Biarritz, with the inaugural crew celebrating the oneworld member’s arrival at the French airport by sporting berets. Services to Inverness will be flown daily, while Biarritz operations will be conducted twice-weekly. 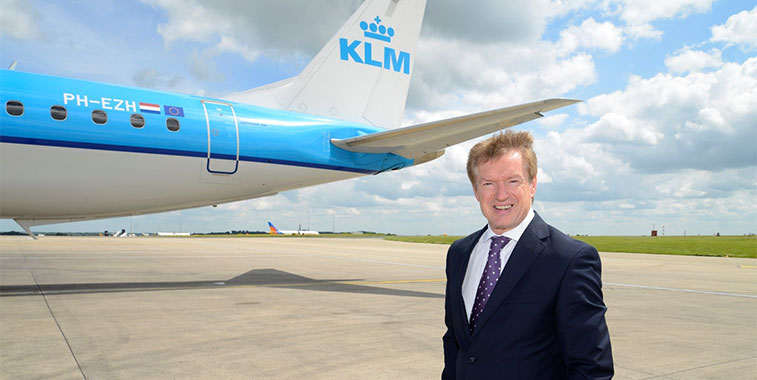 On 16 May KLM commenced an additional weekday service between Amsterdam and Leeds Bradford, meaning that there will be a four times daily service Monday to Friday. As a result of the increase, KLM will be offering 25,800 extra seats on the route during S16. Tony Hallwood, Aviation Development Director at Leeds Bradford Airport (pictured), said: “We’re really pleased to see this increase from KLM. Leeds Bradford customers have been making regular use of the Amsterdam route as it’s such an important key market for business travellers alongside offering fantastic connections to over a hundred worldwide destinations.” 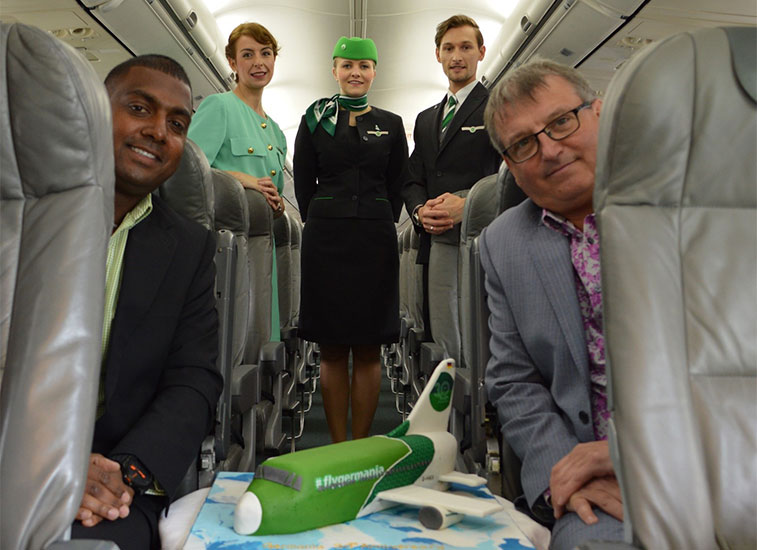 London Gatwick welcomed the arrival of Germania’s 30th anniversary branded 737 on 13 May, with the facility welcoming the aircraft with a cake which showcases its unique livery. Jerome Newton, Germania’s Sales Director for the UK, Ireland and France, said: “It was a very special moment when D-AGER (aircraft’s registration) touched down at Gatwick. Its external livery is unique, but its interior offers the high degree of space and comfort that our customers enjoy and have come to expect. We are delighted to be celebrating its arrival along with senior managers from Gatwick Airport and our own staff.” Seen pictured with the cake are Newton, Germania crew, and Wayne Tomlinson, Gatwick Terminal Operations Manager. 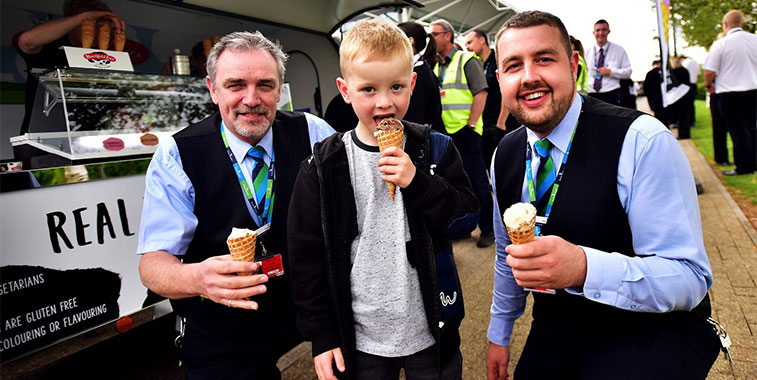 On 17 May Bristol Airport celebrated the milestone of passing seven million passengers in a 12 month period, This major landmark continues the upward trend which saw annual passenger numbers reach 6.76 million in 2015. To celebrate the seven million milestone passengers and staff were treated to free ice creams sourced from local supplier, Gloucestershire-based Marshfield Farms. Robert Sinclair, CEO, Bristol Airport said: “It is amazing to think that when commercial flights commenced on the airport’s current site in 1957 just 33,000 passengers used the facility in the entire first year. We now see a similar number pass through the terminal on a busy summer day.” Seen celebrating with ice creams are Craig Clark and James Power of Bristol Airport and a young passenger called Dakota.