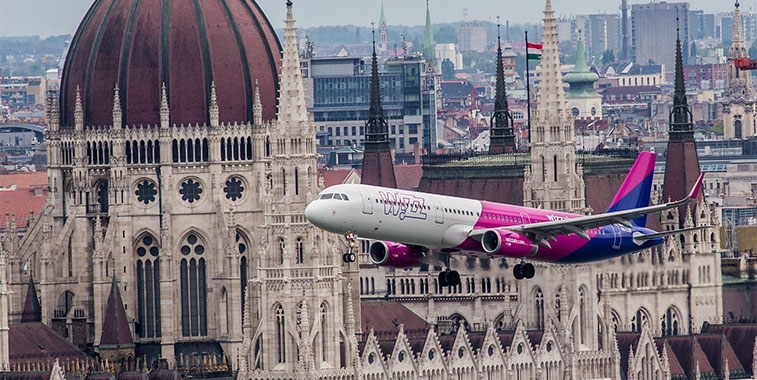 Wizz Air was founded 12 years ago this week in Budapest and the Hungarian capital is its biggest base in Central Europe, although it operates more weekly flights from London Luton. In the last 12 months, the airline has incorporated A321s into its fleet of over 60 aircraft, having previously been purely an A320 operator. Earlier in May, during the Budapest Airshow, the airline flew its newest A321 down the Danube and over the heart of downtown Budapest.

Passenger figures recently published by Wizz Air reveal that for the first time the ULCC has carried over 20 million passengers in a rolling year. In the year ending 30 April 2016, the airline transported 20.22 million passengers, an increase of 20.6% over the previous 12-month period. This summer the carrier will operate some 415 routes involving 118 airports according to OAG Schedules Analyser data for the first week of August 2016. Last year the corresponding figures were 350 routes and 105 airports. This net increase of 65 routes is the biggest increase in a single year in the airline’s history. The net increase of 13 airports however, does not quite beat the net increase of 15 airports that the airline experienced between S12 and S13. Throughout the last decade the average frequency of routes within Wizz Air’s network, during the summer season, has been remarkably stable at between 3.5 flights per week and four. 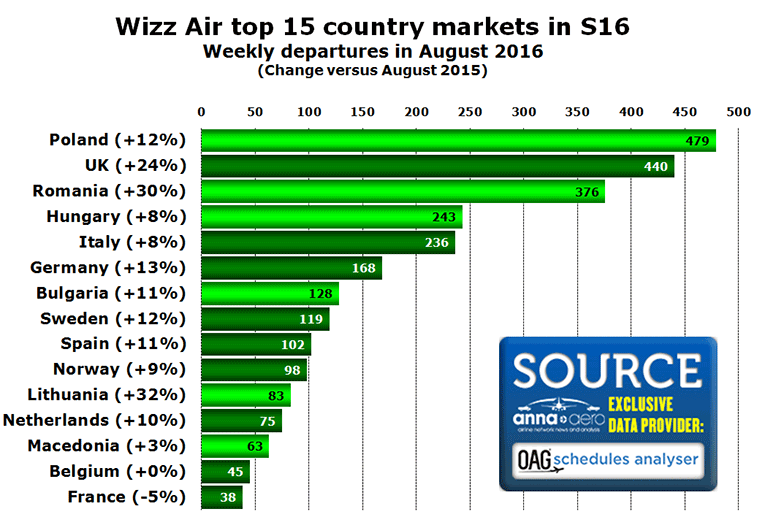 Poland continues to be Wizz Air’s leading country market in terms of weekly departures this summer, followed by the UK and Romania. Growth in the UK is twice as high (+24%) as in Poland (+12%), though Romanian flights are growing even faster (+30%). Of the airline’s top 15 country markets, six are in Central or Eastern Europe (shown in bright green), with Hungary, Bulgaria, Lithuania and Macedonia joining Poland and Romania. The vast majority of the airline’s routes are between points in Central Europe and airports in Western Europe, and the leading Western European country markets (apart from the UK) are Italy, Germany, Sweden, Spain and Norway. France only just scrapes into the top 15 and is the only country market to see a reduction in weekly flights this August compared with last August. 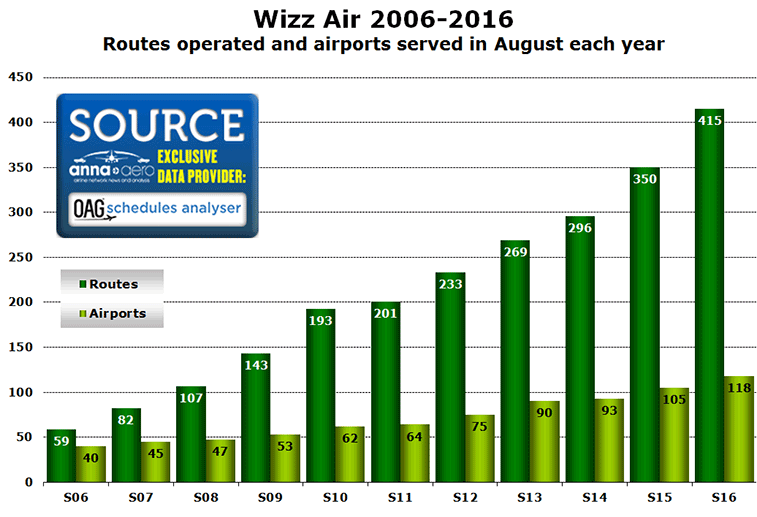 While seven of the airline’s top eight airports are in Central Europe (shown in bright green), London Luton remains the ULCC’s busiest airport this summer with almost 50 departures per day to 35 destinations. Wizz Air operates to more destinations from Budapest (46) and Bucharest (41) than it does from London Luton, with Warsaw Chopin’s network also comprising 35 destinations this summer. 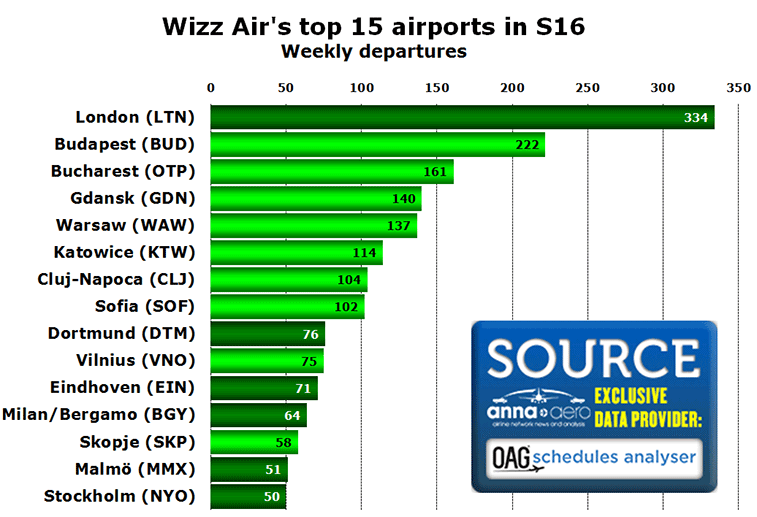 The next biggest Western European airports for Wizz Air after London Luton are Dortmund, Eindhoven, Milan/Bergamo, Malmö and Stockholm Skavsta. Since last summer just one destination has been dropped from the airline’s network (Hurghada in Egypt), while 14 have been added. The new airports are Baku, Berlin Schönefeld, Birmingham, Bratislava, Copenhagen, Craiova (has been served since 2013, but was shut during August 2015 for runway maintenance), Ibiza, Karlsruhe/Baden-Baden, Kaunas, Nice, Palanga, Pescara, Porto and Tenerife South. 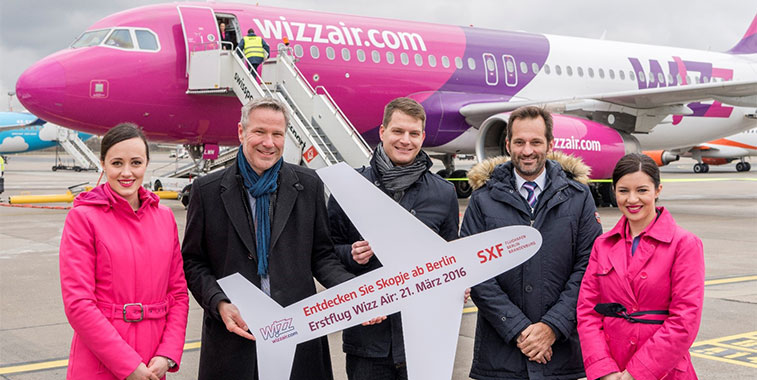 On 21 March 2016 Wizz Air added Berlin Schönefeld to its network when it began twice-weekly flights from its Skopje base. A second route to Cluj-Napoca is scheduled to start on 22 July followed by service to Kutaisi in September. Berlin Schönefeld was one of over a dozen new airports added to Wizz Air’s network between August 2015 and August 2016.

Wizz Air has also recently announced plans to serve London Gatwick with daily flights from Bucharest starting on 18 June, but these flights are not yet shown in OAG data. Other new destinations already revealed that will join the airline’s network after the beginning of August include Fuerteventura, Lanzarote, Olsztyn-Mazury, Podgorica and Suceava. The addition of Podgorica flights (to Milan/Bergamo and Memmingen starting in mid-August) will also add a new country market, Montenegro, to the airline’s network.

The previously mentioned net increase of 65 routes for this summer is derived from the fact that the airline has actually started 77 new routes, but dropped 12. The routes that are not operating this summer but were operating last summer are: Budapest-Hurghada, Budapest-Maastricht Aachen, Gdansk-Rome Fiumicino, Košice-Milan/Bergamo, Katowice-Rome Fiumicino, Riga-Paris Beauvais, Targu Mures-Milan/Bergamo, Timisoara-Rome Fiumicino, Tuzla-Oslo Torp, Vilnius-Corfu, Warsaw Chopin-Stavanger and Wroclaw-Paris Beauvais. However, these 12 routes represent less than 3% of the total network.

25 bases: Iasi, Kutaisi and Sibiu bases opening before end of 2016

Since the summer of 2014, Wizz Air has opened bases in Craiova (Romania), Riga (Latvia), Tuzla (Bosnia & Herzegovina), Košice (Slovakia), Lublin (Poland) and, most recently, Debrecen (Hungary). All of these bases were opened using just a single A320. Between the beginning of July and the end of September further single aircraft new bases will be opened in Iasi and Sibiu (both in Romania) and Kutaisi (in Georgia), bringing the total number of bases operated to 25. Wizz Air’s most recent base opening was last December at Debrecen in Hungary. Existing routes to Eindhoven and London Luton were joined by new routes to Brussels Charleroi, Malmö, Milan/Bergamo and Paris Beauvais.