Air Canada rouge is welcomed to London Gatwick by anna.aero 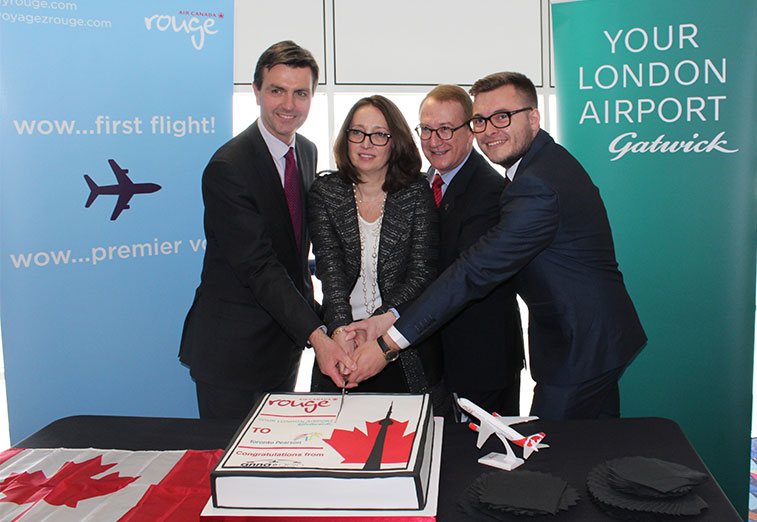 On 19 May, Air Canada rouge commenced services to its third destination in the UK, in the form of a summer seasonal service from Toronto Pearson to London Gatwick. The airline also serves Edinburgh and Manchester from its Toronto base, while flights to Glasgow will start on 14 June from Pearson. On 20 May, celebrations were held at Gatwick to welcome the arrival of the Star Alliance carrier.

anna.aero for a third time this month was commissioned by Gatwick to produce a route launch cake, with anna.aero producing a cake for British Airways’ inaugural service to New York JFK on 1 May, while a second was made for WestJet’s arrival from six destinations in Canada the following week.

The summer seasonal service by Air Canada rouge to Gatwick will be operated six times weekly until 1 June, when the route from Pearson will increase to daily until 26 September. From this date, flights will revert to a lower frequency until 16 October when the season ends. Flights will be flown on the carrier’s 767-300 fleet, which is made up of a two-class cabin configuration, featuring premium and economy. Air Canada already offers services to London Heathrow from Pearson, with the fellow London airport being the carrier’s number one international gateway. “Heathrow is already Air Canada’s largest international gateway with flights to eight Canadian cities, so we are pleased to expand to Gatwick in time for the summer, when millions of people will be travelling between Canada and the UK. With this new route, we become the only Canadian carrier serving the two largest airports in the London metropolitan region, which further solidifies our already market-leading position as the airline operating the most seats between Canada and UK,” said Benjamin Smith, President, Passenger Airlines at Air Canada. All ready for the launch. anna.aero got to the gate early to make sure that the star of the show…the cake…was in place ready to greet passengers as they arrived for the Star Alliance member’s first departure to Toronto Pearson. The inaugural service would be departing from gate 53 at Gatwick’s North Terminal. As well as cake, sparkling champagne, a selection of juices and Air Canada branded pretzels were on offer for the inaugural passengers to enjoy. 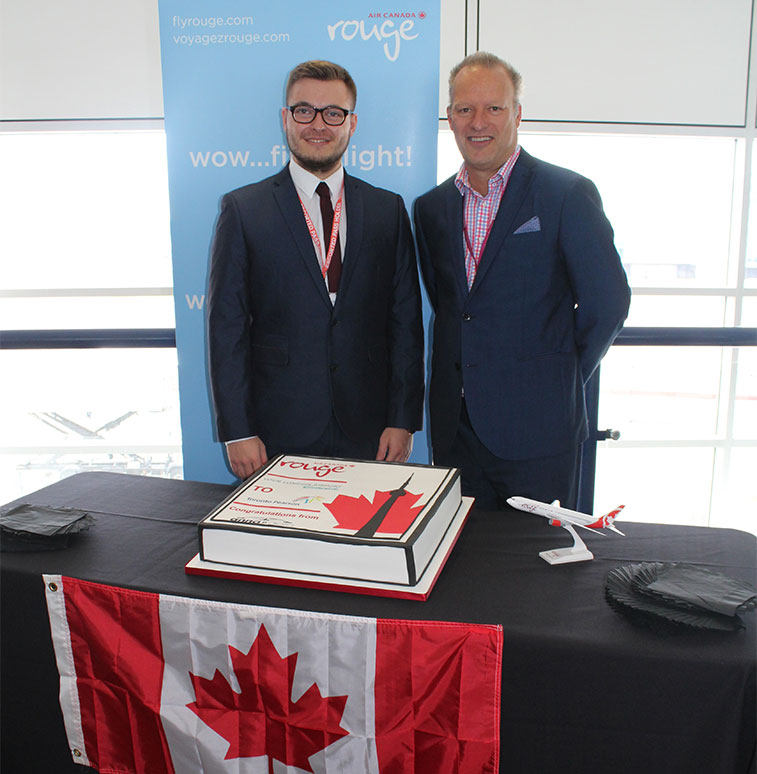 Seen posing with the culinary delight along with anna.aero’s Assistant Editor is Simon Edwards, Airline Business Development Manager at Gatwick Airport, or otherwise known as the man that helped bring Air Canada rouge to Gatwick. Once a majority of passengers had assembled at the gate, it was then time for the speeches to commence. First to the podium was Guy Stephenson, CCO of London Gatwick. “It is a great honour to welcome Air Canada rouge to London Gatwick – voted the number one London airport by passengers. We now house over 45 airlines, serving up to 220 destinations around the world.” One of the latest country markets that Gatwick has welcomed is Peru, with British Airways launching services to Lima earlier this month. By the end of the year the airport will also have direct service to South Africa, with both British Airways and Thomas Cook Airlines linking the hub to Cape Town. Also speaking at the launch ceremony were Alan Kessel, Deputy High Commissioner for Canada, and Margaret Skinner, Director Sales Europe, Air Canada. Both highlighted the important links between the UK and Canada, and thanked Air Canada rouge for recognising this demand. 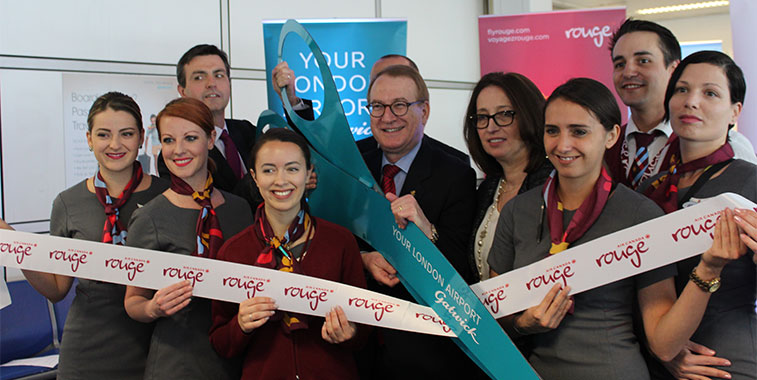 After the speeches, it was then time for the ribbon cutting, with Gatwick getting out its biggest pair of scissors to help herald the start of services. Stephenson, Kessel and Skinner were helped by the inaugural crew to cut the ribbon. During the gate festivities, a Michael Bublé tribute act serenaded passengers with some of the Canadian star’s hits. Although he did not resemble the artist in regards to looks, he certainly did sound like him. One for Simon Cowell to look out for on X Factor one day? 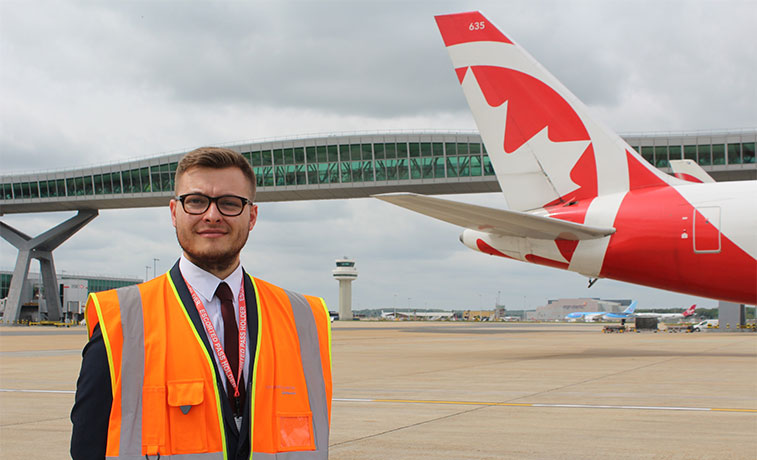 Welcome to Gatwick. No better image for welcoming Air Canada rouge to Gatwick than by getting the aircraft to be back-dropped by the London airport’s iconic bridge. It’s just a shame that anna.aero’s roving reporter got in the way…”Move it Ford!” That’s better. As soon as Ford was out of the way, Air Canada rouge was given pushback clearance for its flight to Pearson. Further down the airfield, incumbent carrier WestJet was spotted being prepared for its departure to Calgary, with the airline also serving Edmonton, St. John’s, Pearson, Vancouver and Winnipeg. The fellow Canadian carrier had commenced services two weeks previous to rouge’s inauguration. On 20 May, it was a very windy morning in Surrey, and that had unfortunately effected the performance of Gatwick’s Fire Truck Water Arch (FTWA) to baptise the new route. However, the London airport did put in a very valiant effort to try and give the first departure the best send-off it could despite the weather conditions. See how Gatwick Airport’s FTWA compares to others from around the world. It was then time for a cannonball run. After Gatwick’s fire service had produced its FTWA, it was then time for Ford to head out with the ground operations team, headed by Kevin Walton, Airside Operations Manager, Gatwick Airport, to go and witness Air Canada rouge’s first departure from the airport. While driving towards the end of runway 26L, anna.aero spotted a WOW air being prepared for departure to Reykjavik/Keflavik. The Icelandic LCC has also opened up new routes to Montreal and Toronto recently via its hub in Iceland’s capital city, offering more competition from Gatwick to Canada via its connections. Powering down runway 26L, flight AC1925 was soon rotating and on its way to Canada. anna.aero would like to thank all the teams at both Gatwick and Air Canada for arranging such a smooth inaugural ceremony, and for allowing anna.aero to be part of the historic launch.