Bologna booming thanks to Ryanair and Emirates; passenger numbers up 14% in first four months of 2016; airberlin new for S16 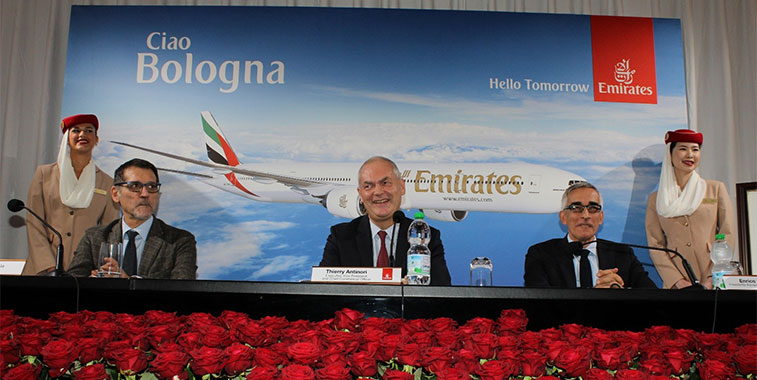 On 3 November 2015 Bologna became Emirates’ fourth destination in Italy following Rome Fiumicino, Milan Malpensa and Venice Marco Polo. It instantly became the airport’s longest scheduled service at almost 4,500 kilometres. However, the airport’s biggest customer by far is Ryanair which accounts for almost 50% of all traffic at the airport.

With almost seven million passengers in 2015 Bologna Guglielmo Marconi Airport is Italy’s seventh busiest airport. In recent years its growth has outperformed that of most other Italian airports, helped by the fact that Ryanair made it base number 29 in late October 2008, having never previously served the airport. In the seven years between 2008 and 2015 passenger numbers at the airport have grown by an impressive 67%. Last year’s highlight was the arrival of Emirates, which launched flights to Dubai on 3 November 2015. 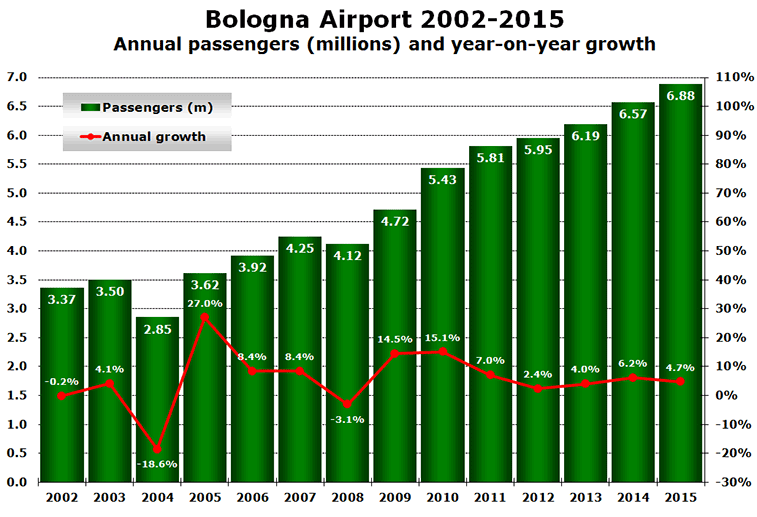 The dramatic dip in passenger numbers in 2004 can be explained by the airport having to close the main runway for two months for maintenance.

Thanks to the arrival of Emirates and Ryanair’s expansion, passenger numbers are up an impressive 14% in the first four months of 2016. In the last three years the airport’s SVID (Seasonal Variation In Demand) score has actually fallen (a good thing) from 4.15 in 2013, to 3.62 in in 2014 and just 3.18 in 2015. However, peak passenger numbers in August are still around 75% higher than those achieved in the quietest month of February. 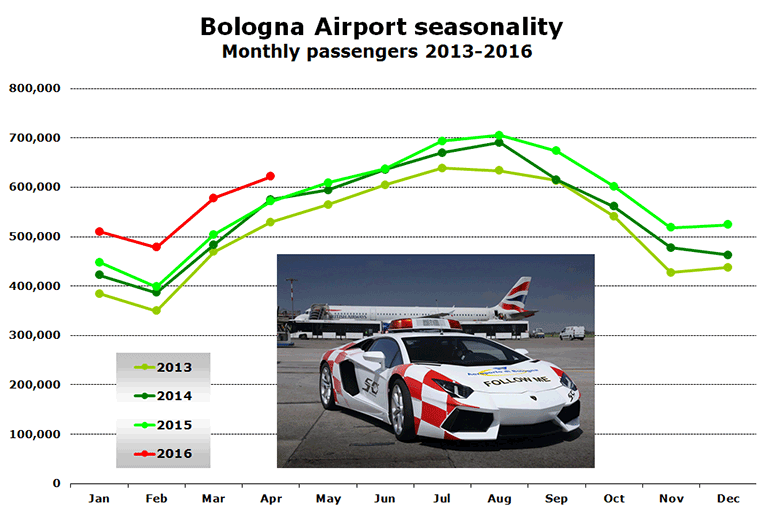 Ryanair accounts for almost 50% of traffic

According to the airport, in the first quarter of 2016 Ryanair was by far the biggest airline at Bologna, with almost 47% of passengers. Since arriving in late 2008, the Irish ULCC has launched flights to 59 destinations of which 42 (71%) are still operating this summer. The 17 routes dropped are to Birmingham, Bratislava, Budapest, Constanta, Fez, Frankfurt Hahn, Girona, Granada, Katowice, Larnaca, London Gatwick, Marrakech, Oslo Rygge, Oslo Torp, Paphos, Poznan and Zaragoza. Since last summer, the carrier has increased its network from 34 to 42 destinations with the addition of Athens (March 2016), Berlin Schönefeld (October 2015), Bucharest (October 2015), Cagliari (October 2015), Copenhagen (November 2015), Gran Canaria (November 2015), Thessaloniki (April 2016) and Vigo (April 2016). 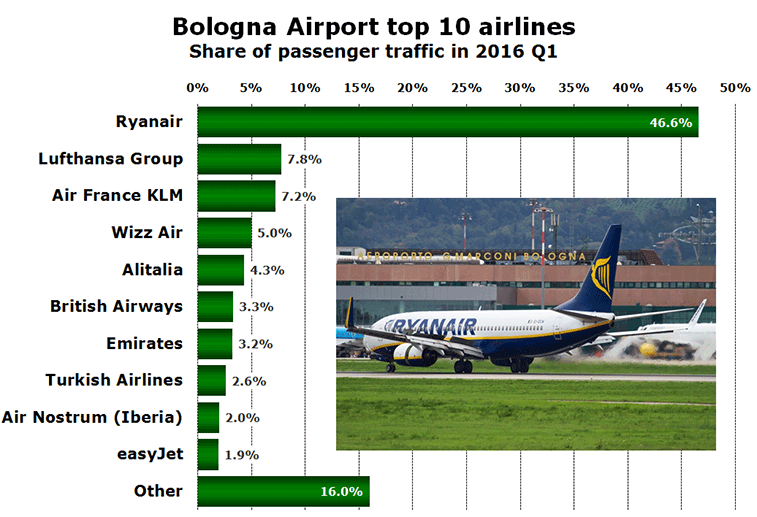 Other recent route developments include the launch of daily flights to Catania with Alitalia (on 1 May), airberlin introducing thrice-daily flights to Düsseldorf using Q400s on 2 May and Wizz Air starting flights to Chisinau in Moldova last September. Wizz Air will also begin thrice-weekly flights to Iasi in Romania starting in July. However, while most LCCs are growing their networks at the airport, easyJet has cut it Bologna routes from four to just one, London Gatwick (which launched in May 2011). Flights to Geneva (started in May 2015), Hamburg (started in March 2015) and Paris CDG (started in December 2011) have all been suspended during the last 12 months.

Apart from Emirates’ Dubai service, Bologna also has hub connections to Amsterdam (with KLM), Frankfurt (with Lufthansa), Istanbul Atatürk (with Turkish Airlines), Munich (with Lufthansa partner Air Dolomiti), Paris CDG (with Air France), Rome Fiumicino (with Alitalia) and Vienna (with Austrian Airlines). At present the airport has no direct scheduled service to any US or Asian destinations. airberlin began thrice-daily flights to Bologna from Düsseldorf on 2 May using Q400s operated by its partner Luftfahrtgesellschaft Walter (LGW). This is airberlin’s first ever service to the airport.