anna.aero prides itself on bringing you the latest news, route analysis and running action, which is why we’re telling you about two vital sporting/networking events you need to be at: The World Airline Road Race (WARR) 2016, hosted by United Airlines in Chicago, 20-25 September, and the premier air transport industry charity-sportive: The Budapest Airport-anna.aero Runway Run, sponsored by Airbus – also a 5km and 10km race – taking place on runway 13R-31L at Budapest Airport on Saturday 3 September, in aid of child cancer charities and other good causes.

United Airlines takes WARR to Chicago. The 35th World Airline Road Race (WARR) is being hosted by United Airlines in Chicago 21-25 September, giving airline teams the chance to “Run with the Wind” in two 5km and 10km road races along the world-famous Chicago Lakefront Trail.

Starting out as a modest gathering of airline running teams in September 1982, last year’s WARR, hosted in Dubai, drew over 1,300 WARRiors. The annual race has developed into a four-day festival travelling the world with a variety of themes and, while the core element is the run, the host always ensures an exceptional social programme. 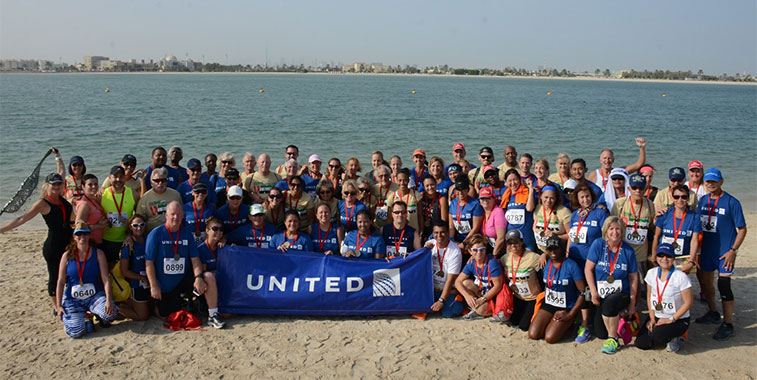 ‘Sun, Sea and Skyscrapers’ WARR Dubai 2015: United Airlines entered a team of 107 runners, the largest travelling team to take part in a WARR. As this year’s host, United Airlines will be taking WARR to Chicago, ensuring an exceptional social programme starting at the nominated WARRtering hole: “It gets pretty crazy,” states Ron Maxwell, United Airlines’ Aircraft Router, and WARR Chairman.

As a gathering of airline industry professionals, WARR’s goal is to provide a global athletic event, promote interaction between airlines, combined with a week of festivities and memorable networking. After ‘Meeting and Greeting’ at the nominated WARRtering hole in Downtown Chicago, this year’s host has secured tickets to The Chicago Cubs baseball game. This is followed by the traditional T-Shirt Party – an evening of swapping and trading specially designed team shirts – there’s even an award for the best!

Ron Maxwell, a United Airlines Aircraft Router, and WARR Chairman, comments: “WARR is as much about coming together as an industry as it is a running event. I would like to invite any walkers, joggers and runners from the airline community around the world to join us this year in Chicago. It gets pretty crazy – but the run will be spectacular and the networking festivities superb.”

Meanwhile, this year’s Airbus-sponsored Budapest Airport-anna.aero Runway Run is on a recruitment drive, inviting executives and leaders from airlines, airports and enterprises across the aviation community to compete for a series of anna.aero-Budapest Airport “Golden Cake Trophies”, awarded for: Vital networking opportunity, sponsored by Airbus: Budapest Airport’s own team, headed by CEO Jost Lammers, took to the runway last year en-masse, while title-sponsor Airbus’ 12-strong group was personally lead into the race by EVP Sales Europe, Chris Buckley: “Airbus is extremely proud to return this year as the main sponsor of this leading sports charity event for the global aviation industry.”

SWISS is the airline to beat, Wroclaw is the airport to knock off the podium, and Gebr. Heinemann is the aviation enterprise to steal a trophy from.

Jost Lammers, CEO of Budapest Airport, adds: “Budapest Airport takes significant pride in staging the air transport industry’s annual sporting and charity event which is unique in its category in Europe. It combines the unforgettable sporting experience of running on a runway with the chance for us to show off the beauties of the city of Budapest to our guests and business partners from the aviation industry, while allowing us to donate all entry proceeds to the Suhanj! Foundation in Hungary, and to the Anthony Nolan charity which provides bone marrow transplants for leukaemia sufferers on a global basis. It really is win, win, win for everyone concerned.”