Air France still dominates at CDG and Orly, but easyJet and Vueling continue to eat into its share 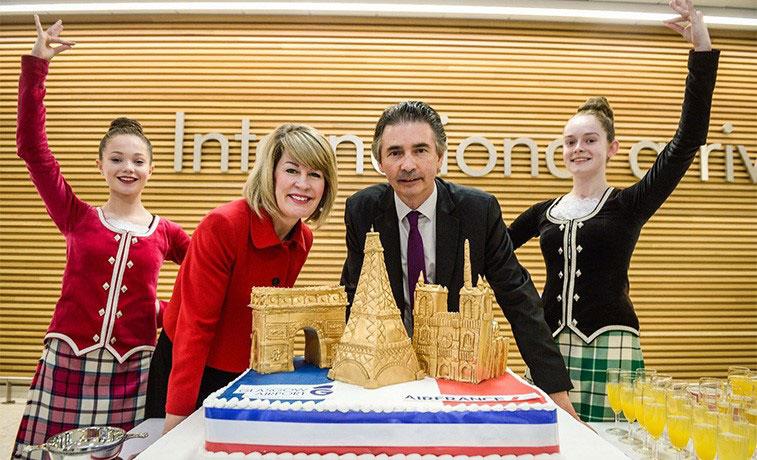 Air France commenced services from Paris CDG to Glasgow on 27 March, as well as a domestic connection to Biarritz on 1 April, the latter being already served from its Paris Orly base. The SkyTeam carrier now operates to seven UK airports and 15 domestic points from its biggest hub.

The last time we looked at Air France’s operations at its two biggest hubs was way back in April 2009. The changes in world affairs, the global economy, the aviation industry and at Air France-KLM itself since then have been countless. At that time the Franco-Dutch airline company was no longer a toddler (it was founded in 2004), but it was having to find its feet in a market rocked by recession. So as it approaches its teenage years today, the challenges may be different (terrorism, cost restructuring), but they are no less precarious or difficult, and therefore Air France’s position at these hubs is worthy of review ‒ pimples and all.

Air travel in and out of France is still dominated by Paris, which is served by the two main airports at CDG and Orly. In 2015, CDG (65.8 million annual passengers) and Orly (29.7 million), accounted for almost 59% of all passenger movements at French airports (down slightly from 60% in 2008). By contrast London’s five major airports (Heathrow, Gatwick, Stansted, Luton and City) handled some 61% of all passengers travelling through UK airports (up from 57% in 2008).

However, whereas in the UK British Airways is the leading airline at two of the five main London airports (with less than 50% of traffic at Heathrow and City), Air France remains by far the dominant airline at both major Paris airports. At CDG it accounts for over 50% of flights and seat capacity, while serving over 140 destinations non-stop. These figures include those flights operated under the AF code by HOP!

easyJet trails in a distant second with less than 8% of flights and seats (although up from 5% in April 2009) and serving 32 destinations (up from 20), including five in France (Ajaccio, Bastia, Biarritz, Nice and Toulouse – up from three).

Air France’s network consists of non-stop routes to some 77 foreign countries (up from 75 in 2009) including 11 to the US, nine to Germany, eight to Italy and seven to the UK. Only one destination is served with over 50 weekly flights ‒ Geneva (62). Eight airports – London Heathrow (48) Barcelona (47), Florence, Frankfurt, Marseille (all 44), Bordeaux, Nice and Toulouse (all 43) ‒ have more than six daily flights on average, with Amsterdam, Madrid and Rome Fiumicino all operated at the equivalent of six daily flights (42 weekly).

Meanwhile at Orly, which is significantly closer to downtown Paris, Air France is still dominant, but only has around a third of capacity. However, if other Air France-KLM Group airlines are included – namely Transavia and HOP! ‒ this figure increases to over 50% (for both capacity and frequency).

Of these 24 routes, 19 are to domestic destinations (which account for over 30% of seat capacity at the airport), while four of the international routes are to other French overseas territories – St. Denis, Pointe-a-Pitre, Fort-de-France and Cayenne. This leaves just one international route to Europe, Basel, which is actually operated to the French part of the same airport – Mulhouse. This international roll call of destinations will see New York JFK added next month when the SkyTeam carrier starts flights again from Orly for the first time since the mid-70s. easyJet is prominent at Orly too, although it has been usurped for second spot by Air France’s in-house LCC Transavia since our data elves last looked at the schedules.

On domestic routes from Paris, Air France faces minimal airline opposition with just easyJet providing an alternative on three of the top 12 routes, as measured by weekly frequencies. In recent years the TGV has had a major impact on French regional service passenger flows into Paris, with Strasbourg losing both its CDG and Orly connections with the mainline carrier, as well as Annecy and Limoges (both Orly). 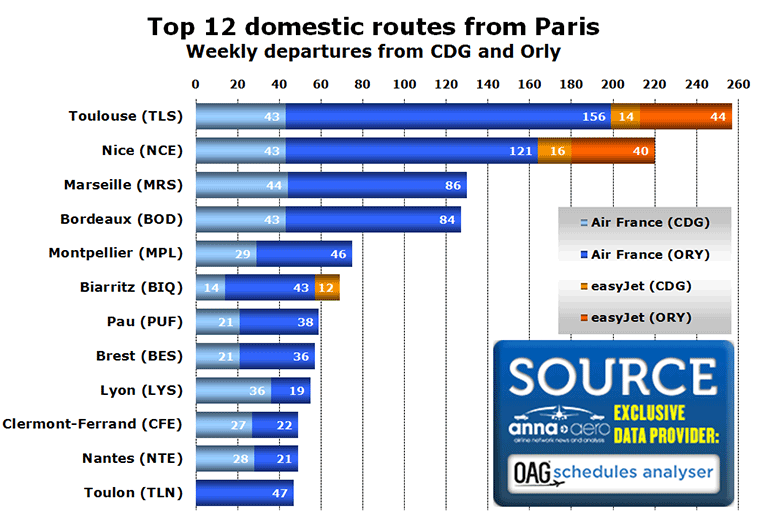 While frequencies between Paris’ airports and Marseille have fallen since domestic operations were last reviewed (from 149 to 130), they have increased to Toulouse (up from 214), Nice (up from 207) and Bordeaux (up from 122). This is due in part to easyJet starting double-daily flights from CDG to Toulouse and also improving the number of frequencies from Orly since 2009, as well as boosting capacity to Nice from both of its Parisian bases. It should be noted that easyjet is also flying to Ajaccio from CDG, which it was not doing when we last undertook this analysis. Overall domestic frequencies have fallen by 5.7% in that period from 1401 in 2009 to 1322 in May 2016. 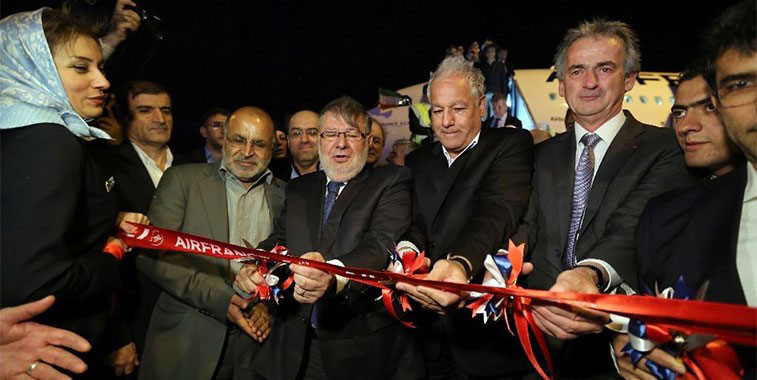 Air France’s Paris CDG network consists of non-stop routes to 77 foreign countries including 11 to the US, nine to Germany, eight to Italy and seven to the UK. Iran was added to this list again for the first time in eight years when the airline began thrice-weekly services on 17 April to Tehran.