anna.aero’s roving Chief Analyst recently popped into Deer Lake Regional Airport in Newfoundland (as you do). Handling around 340,000 passengers annually the airport ranks among the top 25 busiest in Canada, and is the second busiest in Newfoundland after St. John’s.

Deer Lake Regional Airport in Newfoundland (not to be confused with Deer Lake Airport in Ontario) is the second busiest airport in the province after St. John’s. Handling around 340,000 passengers annually, the airport ranks as one of the top 25 in Canada. Between 2005 and 2015 passenger numbers have grown by just over 50%, with growth every year except for 2009. 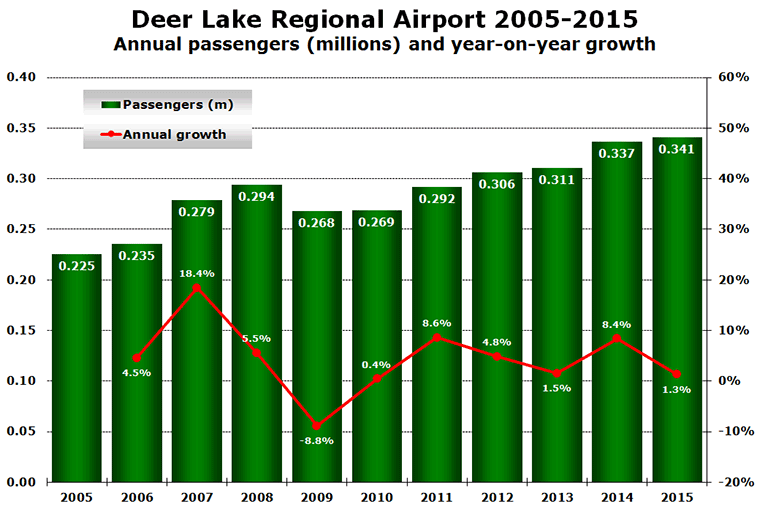 The airport’s biggest routes in terms of weekly seat capacity are to Halifax in Nova Scotia, Toronto Pearson in Ontario, St. John’s in Newfoundland and Goose Bay in Labrador. Air Canada provides schedules services to all four of those destinations, while WestJet operates daily flights to Toronto Pearson and twice-daily flights to Halifax. Provincial Airlines, with a fleet of Bombardier turboprops, serves Gander (in Labrador), Goose Bay, St. John’s and Stephenville (in Newfoundland). Stephenville is just 113 kilometres south-west of Deer Lake. During the summer season Sunwing Airlines offers international flights to the Dominican Republic and Florida. On the afternoon of Wednesday 11 May 2016 Deer Lake was handling scheduled flights by Air Canada, Provincial Airlines and Sunwing Airlines. WestJet also operates flights at the airport to Halifax and Toronto Pearson. Provincial Airlines not only operates scheduled services but also charter services on behalf of the energy industry. This flight arriving on 11 May was bringing in workers constructing the new Muskrat Falls hydroelectric facility in Labrador.