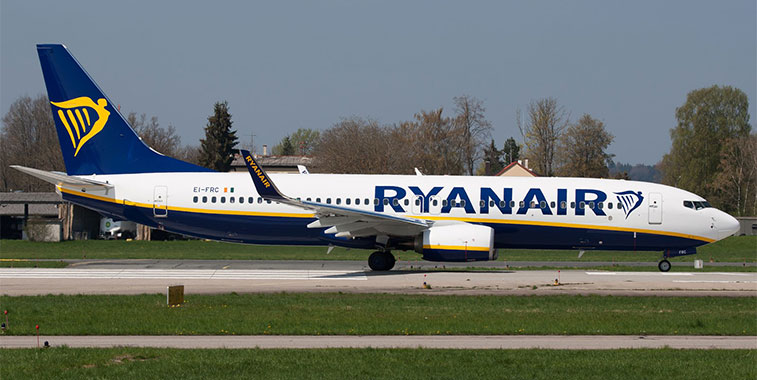 Seen departing Memmingen recently is Ryanair’s 737-800 registered EI-FRC, otherwise known as the 400th aircraft to be delivered by Boeing to the Irish ULCC. Commenting on the arrival of the unit into the airline’s fleet, Ryanair’s COO Michael Hickey said: “The Boeing 737-800, with its industry leading technical reliability and seating capacity, has been the foundation upon which our successful and safe growth has been built upon, since we took our first delivery in March 1999. We are delighted to be now taking delivery of our 400th example, which includes the new Boeing Sky Interior and slimline seats, offering extra leg room and an enhanced customer experience.”

Total deliveries during the fourth month of 2016 from Airbus and Boeing totalled 106 aircraft, 22 units less than the amount which was delivered during the third month of this year by both companies. During April, Boeing distributed 54 aircraft, with the European manufacturer supplying a total of 52. The result means that so far in 2016 Boeing has delivered 53 more aircraft than Airbus, increasing its lead by two units when compared to March’s variance between the manufacturers. Boeing’s April delivery total is 12 units lower than the number it delivered in the same month of 2015, while Airbus delivered 10 aircraft less when compared to April last year. Overall 72% of deliveries in April were narrow-body aircraft, with the remaining 18% being wide-body. Looking at the wide-body market for April, Boeing produced 63% of aircraft (down from 71% in March), while Airbus produced the remaining 37%. 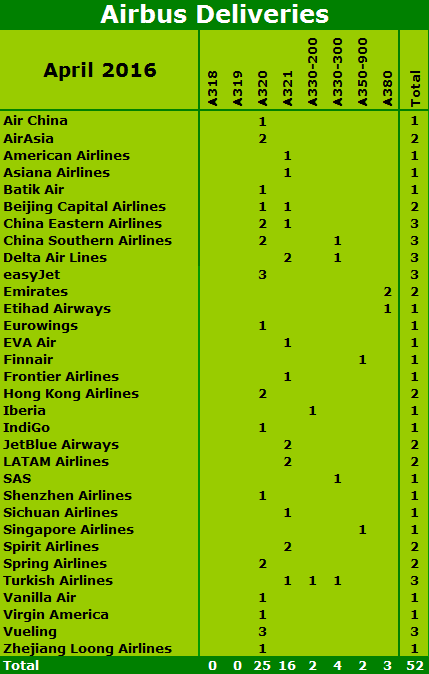 Airbus ended April with a total of 52 unit deliveries, which is five less than the sum the company delivered in March, and 10 less than the number which was distributed by Airbus during the corresponding month of last year.

In April, single-aisle deliveries were led by the A320 (25 units – four less than March), while the A321 followed in second place (16 units), with a grand total of 41 single-aisle aircraft being provided to carriers around the world. It should be noted that no A318s or A319s were delivered. This means that Airbus produced six more narrow-body aircraft than Boeing in April. A total of 16 airlines received A320s (down four from the total of March), with easyJet and Vueling being the largest recipients of the variant, with both picking up three each. In relation to A321 deliveries, 12 carriers picked up the type (two less than March), with Delta Air Lines, JetBlue Airways, LATAM Airlines and Spirit Airlines being the biggest customers by each collecting two units. Beijing Capital Airlines, which last week started its eighth route to Japan, and China Eastern Airlines were the only carriers to pick up an A320 and A321 in April. Turkish Airlines welcomed one A321, A330-200 and -300 in April.

Looking at wide-body deliveries, Airbus handed over 19 airframes in April, nine more than in March. Following on from the delivery of two A380s in the third month of this year, the European producer handed over three in April, with two aircraft going to the world’s leading A380 operator Emirates, while the other was handed over to fellow UAE carrier Etihad Airways. The best performing wide-body in April however was the A330-300, with a total of four being delivered, the same as in March. China Southern Airlines, Delta Air Lines, SAS and Turkish Airlines each collected two of the type from Airbus. Following on from three A350 deliveries in March, two were delivered in April, one to Finnair and Singapore Airlines respectively. 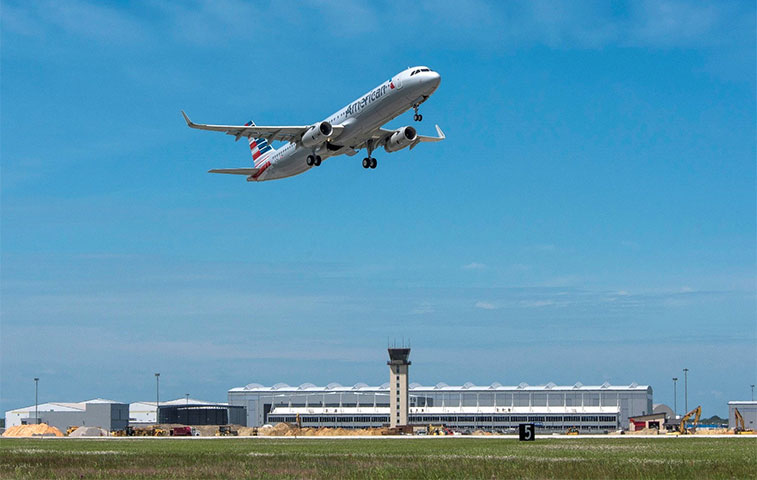 On 21 April, the first American Airlines A321 built in the US took to the skies for its maiden test flight from Mobile in Alabama. Last month the oneworld member welcomed one of the type into its fleet. 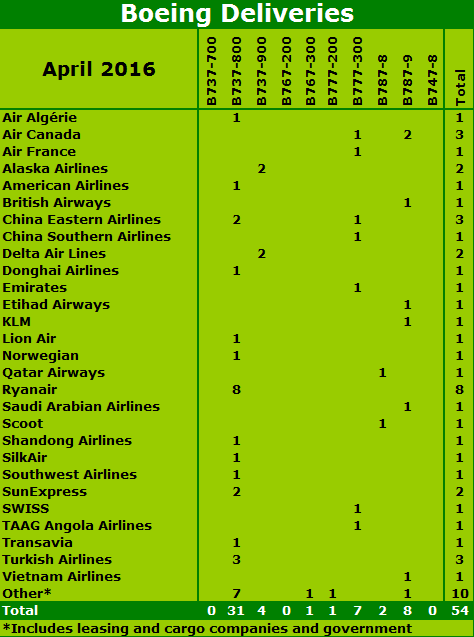 Boeing closed April with a total of 54 unit deliveries, 17 less than in March, and 12 less than in the corresponding month of 2015. Airlines received a total of 35 single-aisle units from Boeing in April, 11 less than March. A total of 31 737-800s were delivered, while only four 737-900s were dispatched to customers. Ryanair was the largest recipient of the 737-800 in April, as it was in February and March, with it picking up eight of the variant into its fleet. This means that for 2016 Ryanair has welcomed 32 737-800s. It also marks the carrier welcoming over 400 737s from Boeing. Ryanair’s COO Michael Hickey said of the milestone: “The Boeing 737-800, with its industry leading technical reliability and seating capacity, has been the foundation upon which our successful and safe growth has been built upon, since we took our first delivery in March 1999. We are delighted to be now taking delivery of our 400th example, which includes the new Boeing Sky Interior and slimline seats, offering extra leg room and an enhanced customer experience.” In total, 15 airlines were delivered single-aisle units from the American manufacturer during April, one less than in March. Nonetheless it should be noted that seven 737-800s were delivered to leasing companies.

An analysis of wide-body deliveries reveals that Boeing handed over a total of 19 units to airlines in April, six less than in March. Boeing handed over 10 787s in April, three less than the month previous. Air Canada was the largest recipient of the 787-9 in April, the same as in March, with the Star Alliance member picking up two of the type, while British Airways, Etihad Airways, KLM, Saudi Arabian Airlines and Vietnam Airlines were all joint second largest customers of the -9, each picking up one. Of April’s 787 deliveries, only two were -8 variants, with Qatar Airways and Scoot each picking up one of the type. No 747-8s were handed over in April, the same as in February and March.