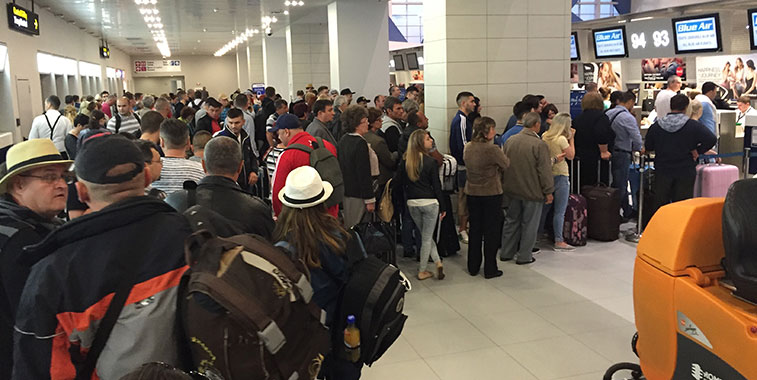 Busy morning in Bucharest. Blue Air flight 0B127 to Castellon was just one of a handful of Blue Air services to depart the Romanian capital on the morning of 1 June, with other destinations being Liverpool, Brussels and Milan/Bergamo. Unfortunately anna.aero’s Assistant Editor Jonathan Ford did not select online check in the night before, meaning he would have to wait his turn in the queue.

On 1 June Blue Air commenced service to its latest destination from Bucharest, the carrier’s largest base, in the form of a twice-weekly (Wednesdays and Sundays) service to Castellon, nestled approximately 100 kilometres north of Valencia. A few weeks previous to the inaugural flight Routes Europe took place in Krakow. During a conversation between Vlad Cristescu, Advertising & Brand Executive, Blue Air, and Alexander Schroll, CEO Castellon Airport, anna.aero’s Jonathan Ford was kindly invited to attend the inaugural flight to Castellon. Not only was Ford invited to attend, but to also be on the first flight. With this, anna.aero’s Ford is the only person that has been on both inaugural services into Castellon, with the roving reporter having been on Ryanair’s first flight from London Stansted last September. With this new service, it now means that Castellon is now connected to two European capitals, with a third one, Sofia, launching in September by the Irish ULCC.

In order to attend the first flight, Ford first travelled from London Luton to Bucharest the previous day. This was to be Ford’s second ever inaugural flight, however for 2016 it was his 20th, which averages out at one flight per week for anna.aero’s globe-trotting Assistant Editor, with him expecting to take many more before the year is out. Time for departure to Castellon. There was no mention of this being Blue Air’s inaugural flight to Castellon on departure, with the only reference being when the aircraft touched down in Spain. The flight departed from runway 08L at the Romanian city’s Otopeni Airport. Flying time to Castellon would be 03:15 hours. During the flight, Ford decided to peruse Blue Air’s inflight magazine. Within it were highlights of Blue Air’s new routes for S16, which includes the carrier’s first flights to Stockholm Arlanda launching on 4 June. The magazine also highlights the airline’s new Romanian domestic connections which will begin at the start of W16/17. Blue Air will be the only carrier to offer domestic flights between regional cities in Romania, with current domestic services from the regions linking to the capital only. 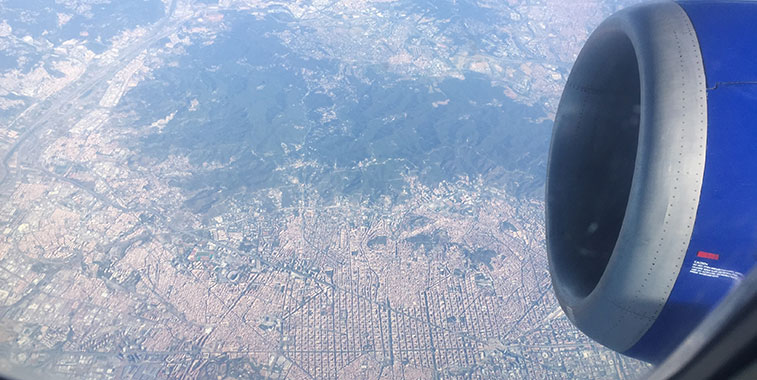 “Ladies and gentlemen, we have just started our initial decent into Castellon.” As soon as flight 127 entered Spanish airspace it was time to get ready for arrival into Castellon. Seen on the decent is the city of Barcelona, with its Avenue Diagonal very visible from 30,000 feet. Those with an eagle eye may be able to just make out the Nou Camp at the top end of Diagonal. Final approach and touchdown. Flight 127 arrived in Castellon just after 09:40 local time, with the flight using runway 06 for touchdown. Fire Truck Water Arch (FTWA) number two for Castellon. After arrival it was time for Blue Air’s inaugural flight to receive its welcome FTWA. This is the second water arch which Castellon has produced, with the Spanish airport greeting Ryanair’s first flight in the same style that it did in September. What Castellon produced this time around however can be classed as a perfect example of the ‘Big boy, Little boy’ FTWA. From inside the salute created a rainbow effect, a spectacle that was also witnessed by anna.aero’s Chief Analyst Ralph Anker when he flew on Icelandair’s inaugural flight to Montreal a few weeks ago. After the aircraft had arrived and its first passengers had disembarked, it was then time for the ribbon cutting ceremony, along with the mayors of three regional towns that surround the airport, taking charge of proceedings were Alain Russel, President and CEO of SNC-Lavalin Aeropuerto Castellon (third from left), and Alexander Schroll, CEO of Castellon Airport (second from right). Time for the cutting of the turrone! Castellon decided not to go with a traditional route launch cake, however instead to go with a turrone, a nougat and marzipan slab that is locally produced in the town of Benlloch situated a short distance from the airport (it can be seen from the airport’s control tower). The showstopper was made by Agut of Benlloch, a company which is located in the town and specialises in the making of turrone. The company has also set up a small store in the airport’s departure lounge which will be open for departing flights so passengers can get their own taste of local cuisine before leaving the region. For passengers arriving on the first flight, a selection of fresh juices and coffee were on offer while they waited for their baggage to arrive. Once the flight had departed back to Bucharest, the turrone was brought in for the remaining passengers in the hall to enjoy. What was left over was enjoyed by the airport’s management later that day. 0B128, the return flight number for Blue Air’s Bucharest service, was one of two flights leaving Castellon that morning. The airport’s first scheduled carrier, Ryanair, was operating one if its twice-weekly flights from Bristol. Services to Bucharest and Bristol both operate on Wednesdays and Sundays, with London Stansted flights operating on Tuesdays, Thursdays and Saturdays. Ryanair will open up a third route to Sofia in September, meaning that Castellon will be connected to three European capital cities. 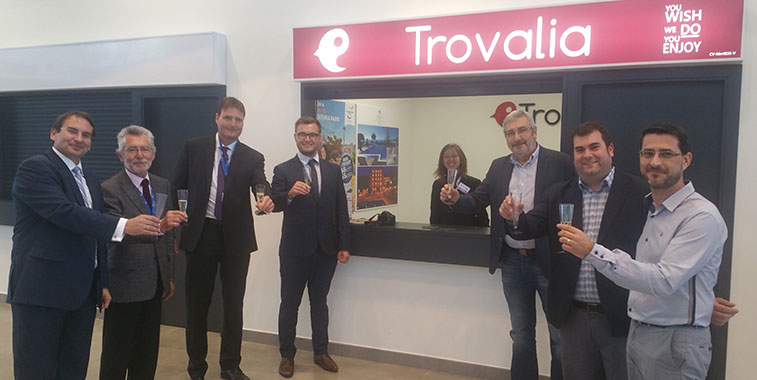 Blue Air was not the only company to inaugurate service from Castellon on 1 June. Trovalia, a travel company that specialises in tourism for the region of Valencia, opened its new office at the airport on the same day as Blue Air’s inaugural flight. The company is also the first ticketing office at the airport, with it being able to provide passengers with seats on Blue Air’s new year-round route. Celebrating with champagne along with Russel, Schroll and Ford are staff from Trovalia and the local community. Ford would like to thank Russel, Schroll and Vlad Cristescu, Advertising & Brand Executive, Blue Air for allowing anna.aero to be part of this historic route launch.