Last November, Ryanair began service between Tenerife South and Krakow in Poland. In 2015, Ryanair was the biggest carrier at the Canary Islands airport with just over 20% of traffic, while the Polish market was the fastest-growing among the top 15 country markets, seeing demand rise by over 50% between 2014 and 2015.

Tenerife South is the second busiest of the five major airports operated by Aena in the Canary Islands, located in the Atlantic Ocean, west of Morocco. In 2015 the airport handled 9.1 million passengers, beaten only by Gran Canaria with 10.6 million. Annual passenger numbers have been between eight and 9.2 million for all of the last decade with the exception of the post-recession period of 2009 and 2010. The airport’s busiest year to date was 2014, though 2016 looks set to top this easily. Tenerife is the location for the 11th Routes Africa conference which takes place from 26 to 28 June. See what is in store for the 200+ attending delegates later this month. 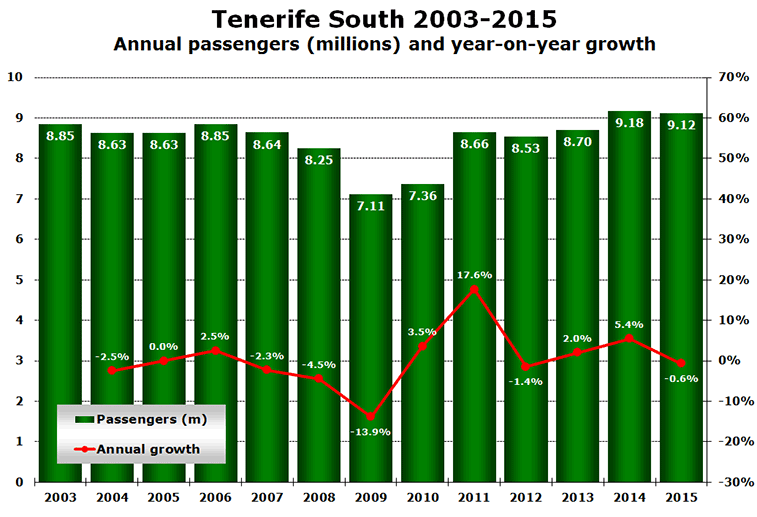 The airport’s seasonality profile is somewhat different from most airports in western Europe with strong winter demand as well as summer demand. This helps give the airport an “excellent” SVID score (Seasonal Variation in Demand) of just 1.35, better than Gran Canaria (2.10, “good”) and only just behind Lanzarote (1.33).

In the first four months of 2016, the airport is reporting growth in demand of 11.4%, which, though impressive, is actually just below the rate of 12.2% for all Spanish airports combined. 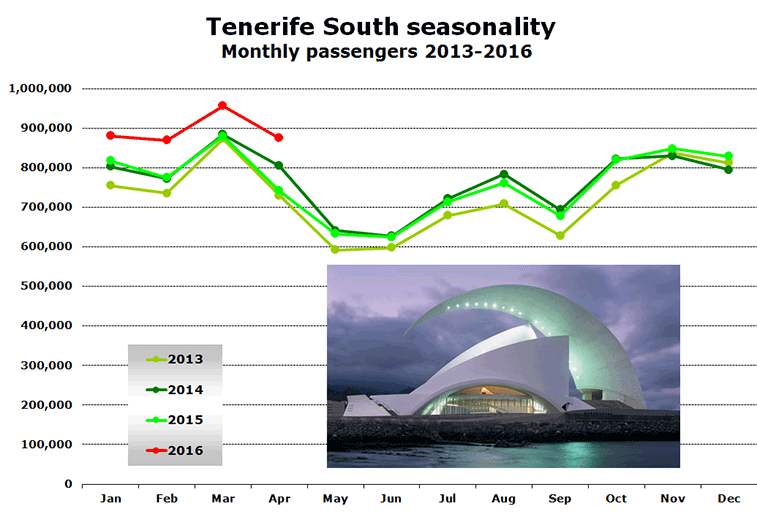 Ryanair leads the way; only started serving Tenerife in late 2006

Data from Aena reveals that in 2015 the busiest carrier at Tenerife South was once again Ryanair with over 1.8 million passenger. This represents just over 20% of traffic last year. No other carrier even comes close to the 10% mark, with second-ranked Thomson Airways accounting for 8.7% of passengers in 2015. The top four airlines all increased their passenger numbers and grew their market share, but the rest of the top 12 airlines (with the exception of airberlin) all saw a decline in Tenerife South passenger numbers. 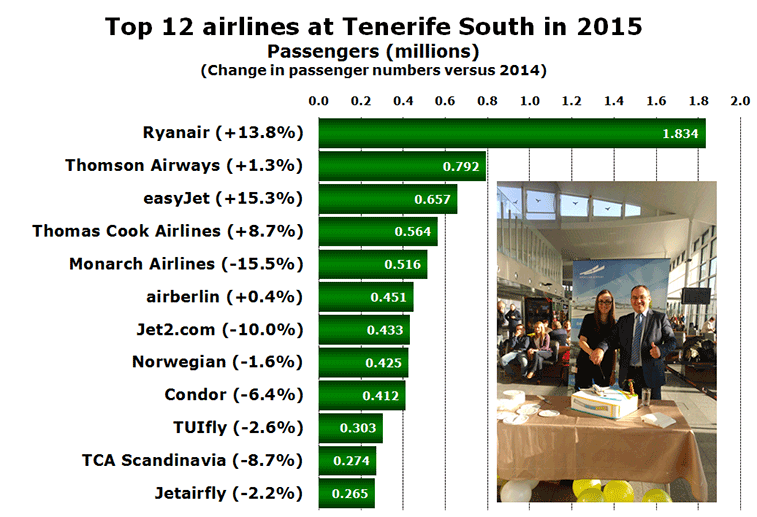 The top 12 airlines in 2015 were all LCCs or leisure airlines based in northern Europe; five based in the UK, three in Germany, two in Scandinavia, and one each in Ireland and Belgium. It is worth noting that Ryanair only began serving Tenerife South (from Dublin) in December 2006. Since then it has begun a total of 56 routes from the airport, of which 38 are still being served this summer. Some destinations such as Bremen, Knock, Oslo Rygge ad Stockholm Skavsta are currently served seasonally only in the winter. Destinations that were once served by Ryanair but that are not currently offered by the ULCC from Tenerife South include Doncaster Sheffield, Maastricht Aachen, Palermo, Stockholm Vasteras and Zaragoza.

One airline looking to break into the top 12 in 2016 is Vueling. Until recently its only route to Tenerife South was from Barcelona. However, between the beginning of June and early August the IAG carrier will have added new routes to Alicante, Birmingham, Malaga, Manchester, Paris Orly, Rome Fiumicino, Santander, Seville, Valencia, Zaragoza and Zurich.

Analysis of Aena data for 2005 shows that the leading airlines a decade ago were; Spanair (666,000 passengers), Britannia Airways, Hapag-Lloyd, Air Europa, Condor, Monarch Airlines, First Choice Airways, Thomas Cook Airlines, MyTravel Airways and LTE International. As that list clearly demonstrates there has been a lot of consolidation and rebranding among European leisure airlines during the last 10 years.

Flights to and from the UK are responsible for a significant 41% of passengers at the airport. With services to and from Germany accounting for a further 17% of passengers in 2015, these two markets have almost 60% of the market. The fastest-growing country markets in 2015 were Poland (+53%) and Italy (+42%). Declining markets included Finland (-14%), Norway (-25%) and Russia (-53%). The top 15 country markets account for 96% of all traffic at the airport. 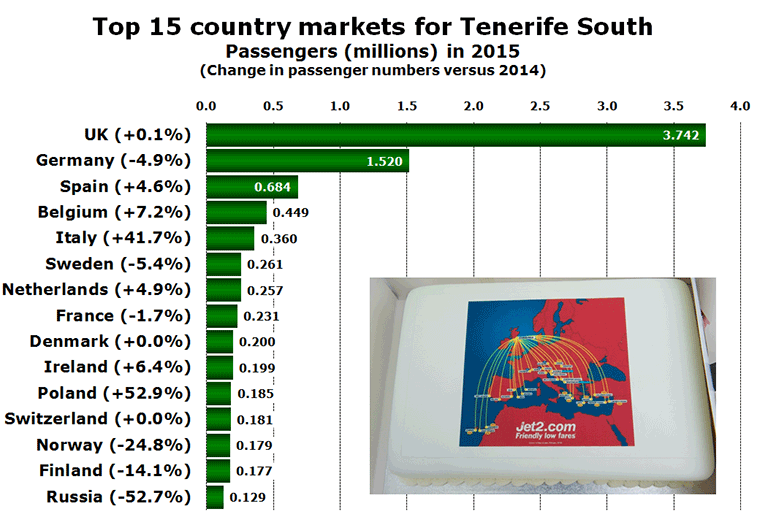 With the summer season now under way, Tenerife South will welcome additional services before the end of the year, notably from; Eurowings to Düsseldorf and Hamburg, Germania to Nuremberg, Ryanair to Belfast International and Newcastle, Transavia to Munich, and Wizz Air to Bucharest and Katowice. 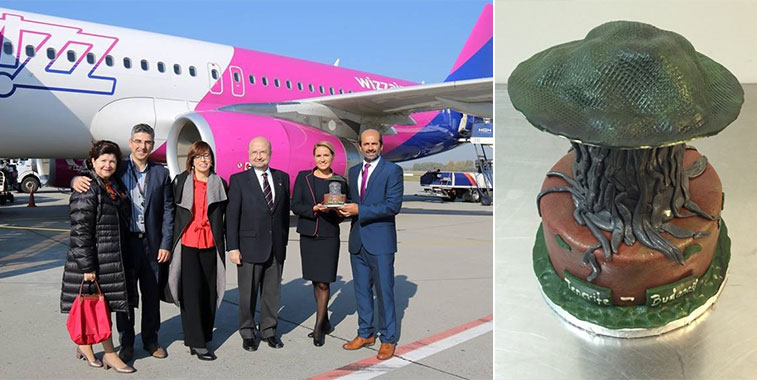 At the end of October 2015 Wizz Air launched its first route to Tenerife South from its home base in Budapest operating a twice-weekly service. The ULCC plans to add further routes from its bases in Bucharest and Katowice this winter.