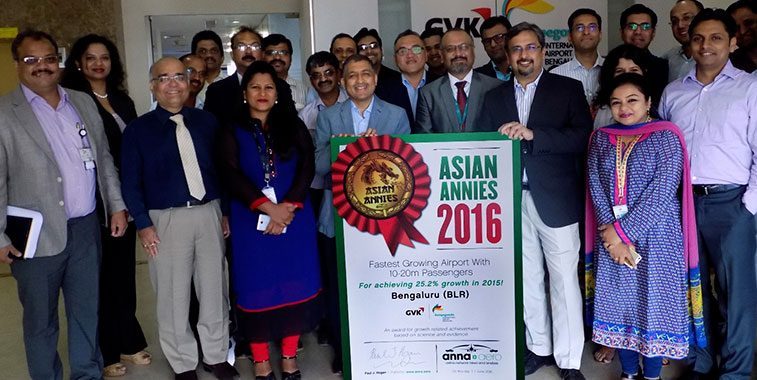 Bengaluru International Airport Limited Executive Committee along with team from Marketing pose with their Asian ANNIES award for being the fastest-growing airport in Asia in the 10-20 million annual passenger category. Demand was up 25.2% to 18.1 million passengers in 2015. Runner-up Hanoi Airport in Vietnam could only manage growth of 21.3% to 17.2 million last year.

Suffering from awards withdrawal syndrome? Then you’ve come to the right place. It might be a while until the Oscars or the Grammys, but anna.aero’s very own Asian airport and airline awards – the Asian ANNIES – are here to help fill the summer-long award ceremony void. Yes the time has come for the sixth Asian ANNIES, this year awarded to eight airports and four airlines for their notable route development achievements in the Asian region over the past 12 months.

Our awards are based on science, statistics and evidence rather than people’s opinions (and votes). Using OAG schedule data for 1-7 August 2016 compared to 3-9 August 2015 from across over 800 airports and nearly 300 carriers operating in the Asian region, our team of data elves have pored over the figures and we think we have come up with a more transparent way of rewarding airlines and airports that have achieved notable route and traffic related success in the Asian region during the last year. 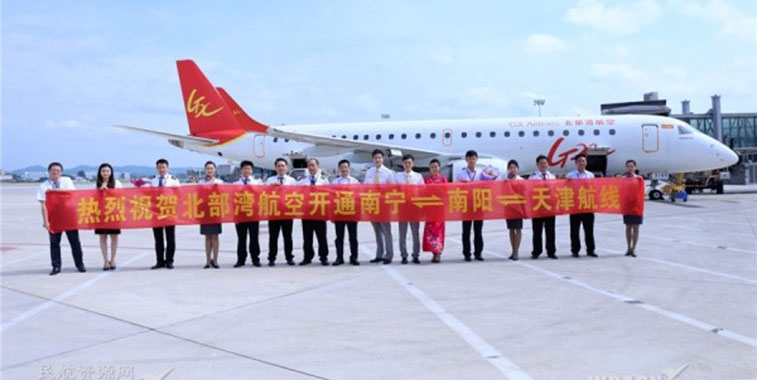 Nanning Wuxi International Airport has benefited significantly from the growth of local carrier Guangxi Beibu Gulf Airlines, also known as GX Airlines. The E190 operator has started many new routes from Nanning during the last 12 months. 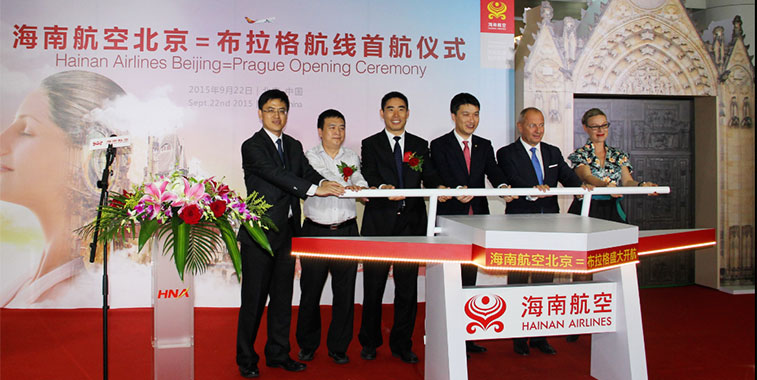 On 22 September 2015 Hainan Airlines celebrated the introduction of its new non-stop service from Beijing to Prague, helping the Chinese capital airport to win the Asian ANNIES award for Most New Long-Haul Routes for a third straight year.

In this situation, the definition of a long-haul route is a flight of over 4,500 kilometres originating from the Asian region. As a result, Beijing has managed to secure this award for the third year running, with a net gain of six new long-haul routes. New long-haul destinations this August compared with last August include Auckland, Calgary, Johannesburg, Manchester, Montreal and Prague. Beijing just beat out local rival Shanghai Pudong which recorded a net gain of five long-haul routes, from 59 to 64. The five new destinations are Hurghada, Madrid, Prague, San Jose and Vienna. 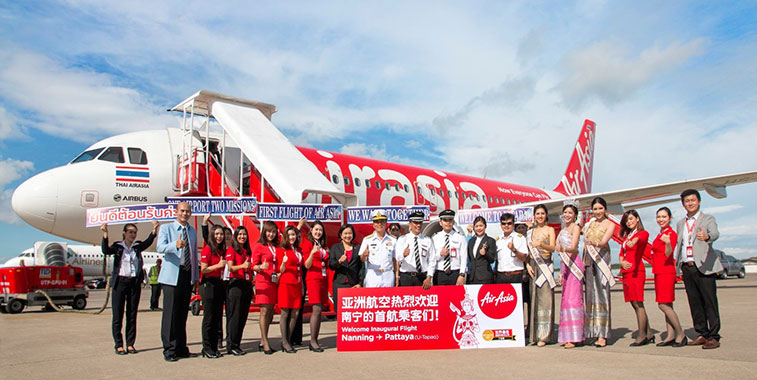 Nanning Airport welcomed Thai AirAsia’s inaugural flight from Utapao on 25 September 2015. Thai AirAsia was one of 10 new airlines for the Chinese airport, helping it to win the Asian ANNIES award for Airport With Most New Carriers. 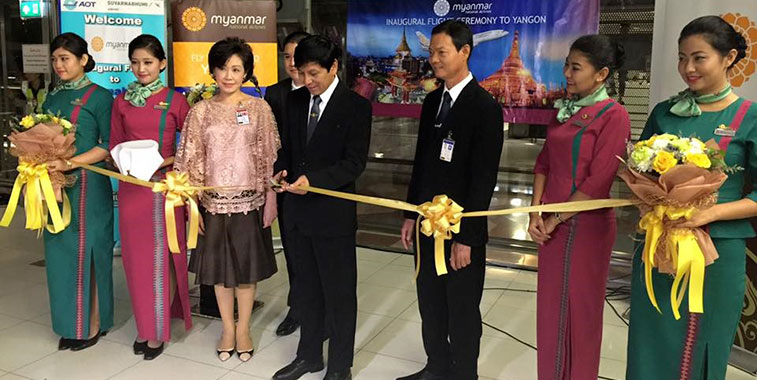 Nope, no change here. For the fifth straight year Bangkok Suvarnabhumi wins the ‘planespotter award’ (as it is affectionately known by anna.aero data elves), once again beating Hong Kong (runner-up for the fifth time in a row). Bangkok’s airline portfolio currently stands at 90 airlines, nine ahead of Hong Kong with 81. So it looks like the Thai capital airport will likely hang on to this award for at least a couple more years.

Using a combination of OAG Schedules Analyser data as a guide and then our Rest of World airport traffic database to check actual passenger numbers we have awards in four different categories based on the airport’s size (measured by annual passenger throughput). 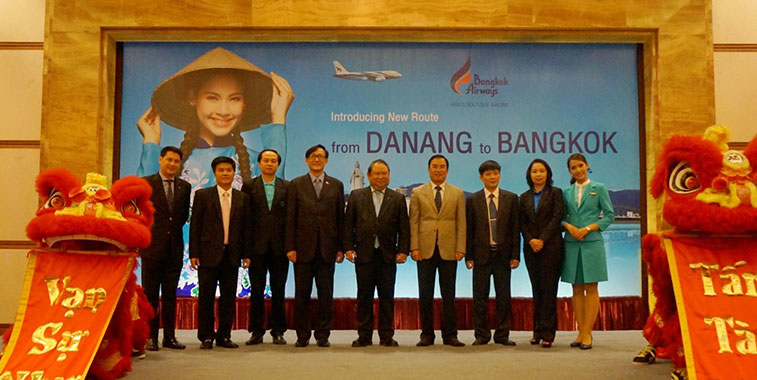 For the second year running, Da Nang Airport in Vietnam has been identified as the fastest-growing in Asian in the 5-10 million passenger category. On 25 May Bangkok Airways began four times weekly flights from, not surprisingly, Bangkok. Da Nang’s passenger numbers grew by almost 35% in 2015 to 6.7 million.

The last two winners of this category were China Southern Airlines (2014) and China Eastern Airlines (2015). This year the award again goes to a Chinese carrier, but this time a fast-growing relative newcomer, Zhejiang Loong Airlines. Another Chinese carrier, Hainan Airlines, takes the runner-up position. In this category intra-Asian routes get double-counted (once from each airport), so Zhejiang Loong Airlines’ net gain of 100 routes actually represent 50 city pairs. According to OAG Schedules Analyser data, last August the airline operated just six domestic routes from Hangzhou, but will this August be operating a total of 56 routes, of which 34 will be from Hangzhou. Air China has expanded its long-haul network (routes over 4,500 kilometres) from 30 to 38 between August 2015 and August 2016. Last September the Star Alliance carrier began non-stop flights to Montreal in Canada, an event which was celebrated at the Canadian airport with a banner on the apron and a great cake.

Last year there was a tie in this category with Turkmenistan Airlines and Cebu Pacific Air both increasing their Asian long-haul route networks by five. This year, Air China with a net gain of nine new long-haul routes (defined as flights of over 4,500 kilometres) just beats fellow Chinese alliance carrier China Eastern Airlines with a net gain of eight. Air China new long-haul services include Auckland, Johannesburg, Montreal and Newark from Beijing, San Jose from Shanghai Pudong, Paris CDG from Chengdu, Dubai from Chongqing and Frankfurt from Shenzhen.

China Eastern Airlines’ new long-haul services include Auckland, Amsterdam, Chicago O’Hare, Colombo, Madrid, Prague and St. Petersburg all from Shanghai Pudong, with the 5,095-kilometre service to Colombo counted twice as it is still in Asia.

Not surprisingly, given its rapid network growth which won it the Airline With The Most New Routes award, Zhejiang Loong Airlines also wins this award, as it started flying from 37 new airports. This beats the 25 airports that runner-up Guangxi Beibu Gulf Airlines has added to its network.

This award goes to the airline with the most scheduled seats operating from Asian airports in August 2016 that was not operating in, or to, the Asian region in August 2015. The clear winner in this category is Guangxi Beibu Gulf Airlines, also known as GX Airlines. The carrier launched operations in February 2015 and is a joint venture involving Tianjin Airlines. It is based at Nanning Airport and currently operates a fleet of 10 E190s. However, schedule data was only provided to OAG from the end of October 2015 onwards, so in terms of our analysis it counts as a new airline.