Virgin Atlantic Airways focussing ever more on US flights; many non-US routes dropped, as well as domestic Little Red operations 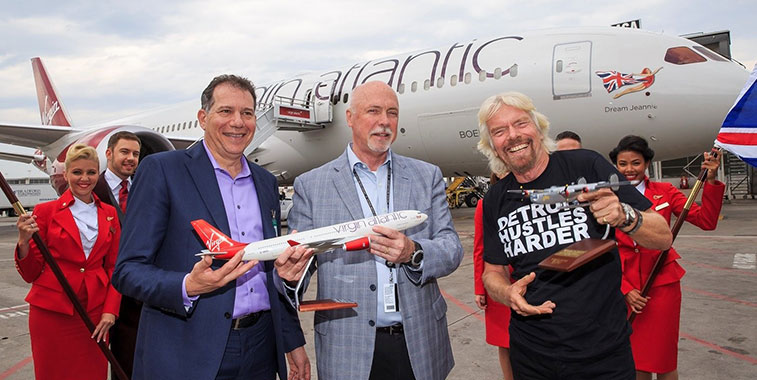 Last June Virgin Atlantic Airways launched its most recent route from London Heathrow, to Detroit. Delta Air Lines, which completed purchase of Singapore Airlines’ 49% stake in Virgin Atlantic in June 2013, has 75% of seat capacity at Detroit. Similarly, Delta is dominant at Atlanta, a route that Virgin Atlantic added to its network in October 2014.

Virgin Atlantic Airways ranks as the second biggest carrier in terms of weekly seats on flights between the UK and the US. With almost 170 weekly departures and over 54,000 weekly seats, Sir Richard Branson’s airline (in which Delta Air Lines is now a major shareholder) is beaten only by British Airways (87,400 weekly seats) and is bigger than American Airlines (45,500 weekly seats). In recent years the airline has been undergoing significant fleet regeneration. Since October 2014 it has acquired 12 factory-fresh 787-9s, while its 10 twin-engine A330s were all delivered between February 2011 and November 2012. However, it still operates 17 four-engine aircraft; nine A340-600s and eight 747-400s giving it a total fleet of 39 aircraft. This is only one more than it had at the end of 2009. According to UK CAA data Virgin Atlantic’s fleet then consisted of 38 aircraft, comprising 13 747-400s and 25 A340s (19 -600s and six -300s). The adoption of twin-engine aircraft was critical to the airline’s future with fuel prices making the A340s in particular a challenging aircraft to operate from a financial perspective. 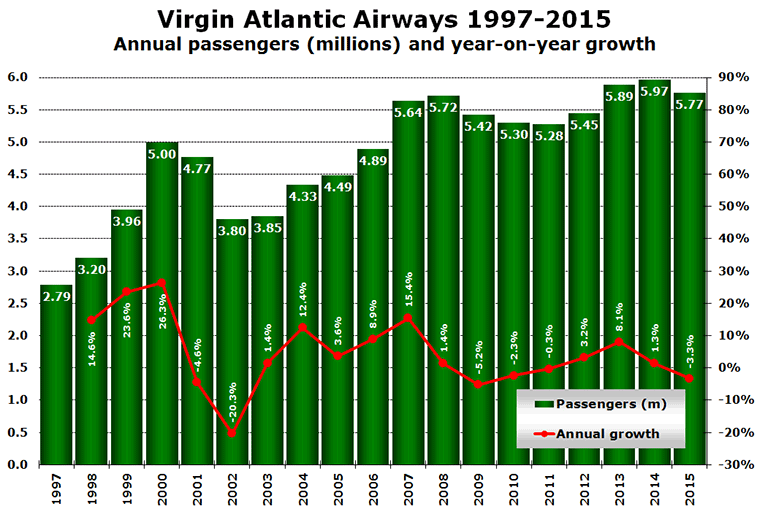 For the last nine years the airline has carried between five and six million passengers each year, mostly on long-haul flights. However, in 2013 the airline began domestic flights from London Heathrow to Aberdeen, Edinburgh and Manchester using slots handed back by British Airways as part of a deal to allow it to purchase bmi, a significant competitor at the time on short-haul services from Heathrow. The hope was that these domestic routes would feed the airline’s long-haul services but this did not work out the way the airline had hoped. Virgin Atlantic hired Aer Lingus to operate the domestic flights, but the aircraft and crews operated in Virgin Atlantic livery and were branded as ‘Little Red’.

Virgin Atlantic operates to 16 destinations non-stop from its main London Heathrow base. Of these 10 are to destinations in the US, while the others are to China (Shanghai), Hong Kong, India (Delhi), Nigeria (Lagos), South Africa (Johannesburg) and UAE (Dubai). From London Gatwick Virgin Atlantic operates flights this summer non-stop to eight destinations, with an additional four routes from Manchester and one from Glasgow. Maybe surprisingly, when measured by ASKs (Available Seat Kilometres) which takes into account frequency, sector length and aircraft size (seats), Virgin Atlantic’s biggest route this summer is from Gatwick to Orlando. This just beats the airline’s five times daily service to New York JFK, with the airline’s Manchester to Orlando service ranking third. Eight of the other nine top 12 routes are all from Heathrow. Non-Heathrow routes are highlighted in bright green in the following graph. 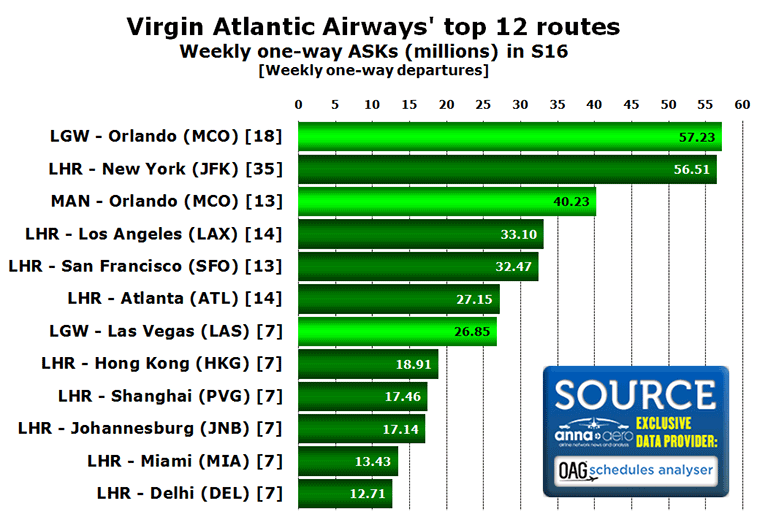 Apart from the domestic routes which all launched at the start of S13, Virgin Atlantic’s most recent new routes have been from Heathrow to Detroit (June 2015) and Atlanta (October 2014). Several destinations that were served by the airline are no longer served. Sydney services via Hong Kong ceased in May 2014, Vancouver flights ended in October 2014, Mumbai and Tokyo Narita flights ended in February 2015, and Cape Town flights in April 2015. Going back a bit further, flights to Accra ended in September 2013, Nairobi connections ceased in September 2012, while service to Mauritius was ended in April 2010.

Looking ahead, Virgin Atlantic has announced plans to start more new US routes from Manchester to Boston and San Francisco starting in March 2017, as well as Seattle-Tacoma flights from London Heathrow in May 2017. 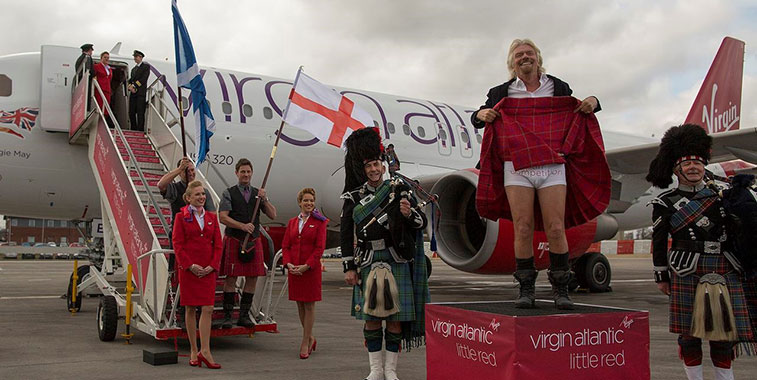 Virgin Atlantic’s entry into the UK domestic market in April 2013 ended up providing rather less ‘stiff competition’ than Sir Richard Branson had hoped. Flights to Manchester ended in March 2015 with Aberdeen and Edinburgh operations finishing in September 2015.