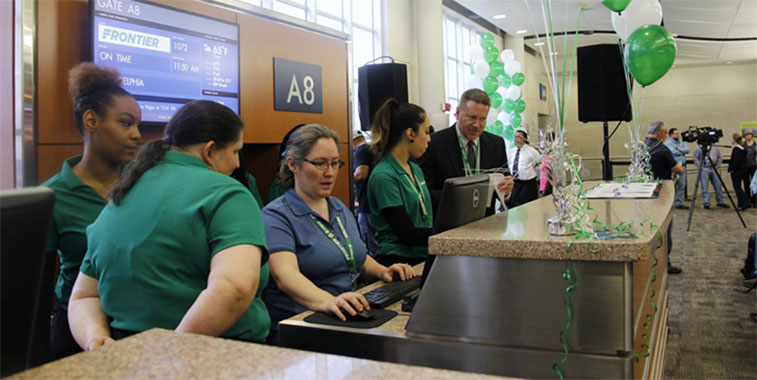 Gate A8 at San Antonio International Airport was where the action was on 13 May 2016 as local media assembled to celebrate the launch of Frontier Airlines’ inaugural service to Philadelphia. The Denver-based ULCC started four routes in May (the others were to Atlanta, Denver and Las Vegas), making it the second ULCC (after Allegiant Air last November) to start services at the Texan airport in the last 12 months.

With a population of around 1.4 million people San Antonio in Texas ranks seventh among US cities for population and yet its airport, despite handling over 8.5 million passengers last year, ranks just outside the top 40 of US airports. Even within Texas it is only the sixth busiest facility after Dallas/Fort Worth (64.1 million), Houston Intercontinental (43.0m), Dallas Love Field (14.5 million), Houston Hobby (12.1 million) and Austin-Bergstrom (11.9 million). Passenger numbers passed eight million for the first time in 2006 and have been between eight and nine million ever since, apart from 2009 when they dipped to 7.84 million. 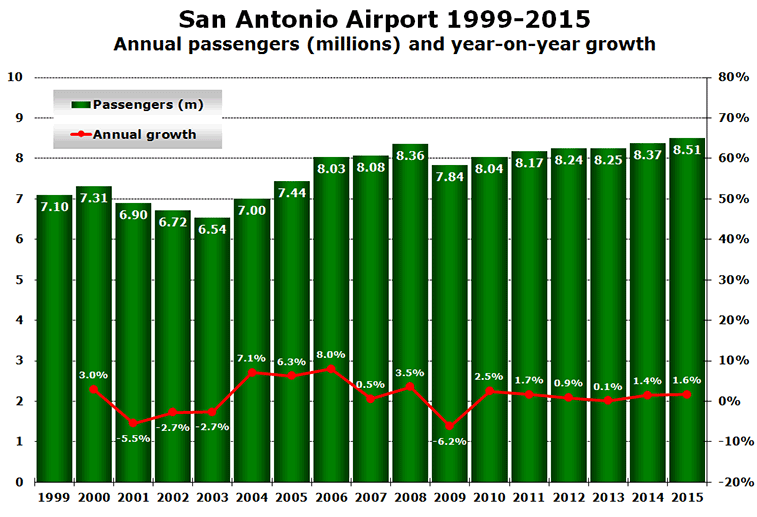 Last year, total passenger numbers rose by 1.6% to 8.51 million (a new record for the airport) with domestic traffic up 1.2% to almost exactly eight million passengers, and international traffic growing by 10% to just over 510,000 passengers. As a result, international passengers increased their share of the total airport traffic from 5.6% in 2014 to 6.0% in 2015. All international routes at present are to destinations in Mexico.

The airport benefits from good year-round demand scoring an impressively low 1.07 (“Excellent”) in 2015 on anna.aero’s SVID (Seasonal Variation In Demand) calculator. In 2014 and 2013 the airport’s SVID score was 1.08 and 0.81 respectively. In the first quarter of 2016 passenger numbers are up a modest 1.5% with domestic traffic leading the way (+2.3%). International traffic is down 11.6% mostly due to VivaAerobus ending its service from Monterrey last August. However, three other Mexican carriers (Aeromexico, Interjet and Volaris) continue to serve San Antonio from Mexico. 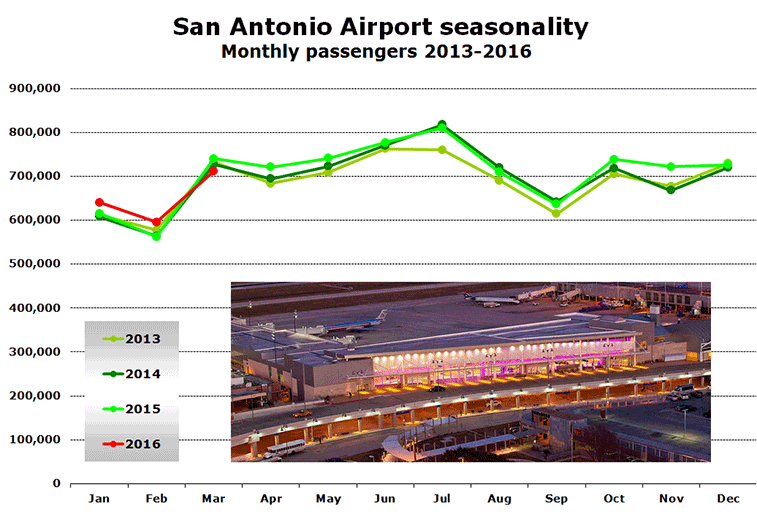 Southwest Airlines accounts for 40% of traffic in 2015

Passenger data from the airport for 2015 reveals that Southwest Airlines is by far the leading airline at the airport, carrying just over 40% of the airport’s passengers. However, this is down slightly from the 41.7% share it had in 2014. In fact, Southwest was one of only two airlines to carry fewer passenger at San Antonio Airport in 2015 than it did in 2014, the other being US Airways. 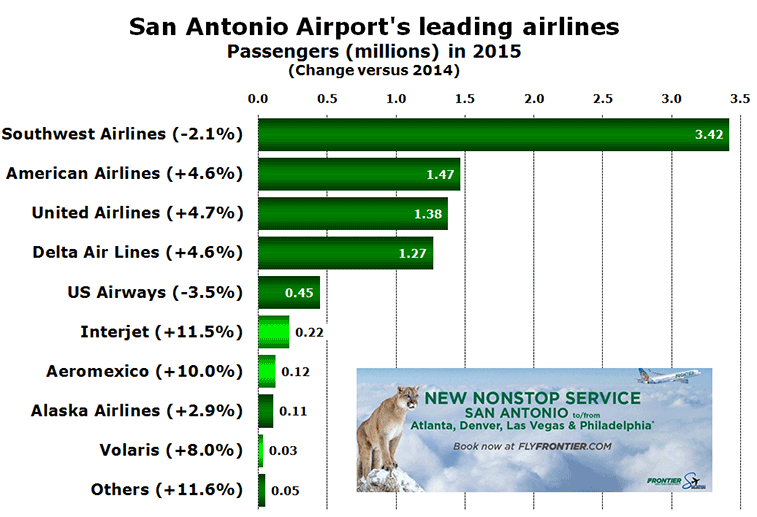 Allegiant Air added San Antonio to its network last November when it began low frequency flights to Fort Lauderdale, Las Vegas and Orlando Sanford. These have been continued into the summer season. More recently, another ULCC, Frontier Airlines, has started four route to San Antonio. On 13 May the carrier began flights to Atlanta (four times weekly), Denver (daily) and Philadelphia (four times weekly), with thrice-weekly flights to Las Vegas beginning on 15 May. Philadelphia was a route previously served by US Airways, but the route ended after the merger with American Airlines.

According to OAG Schedules Analyser data for July 2016 a total of 36 destinations will be served non-stop from San Antonio, including four in Mexico (Cancún, Guadalajara, Mexico City and Monterrey). Measured by weekly departures, Dallas/Fort Worth is the busiest route, with American Airlines operating some 12 flights per day each way. 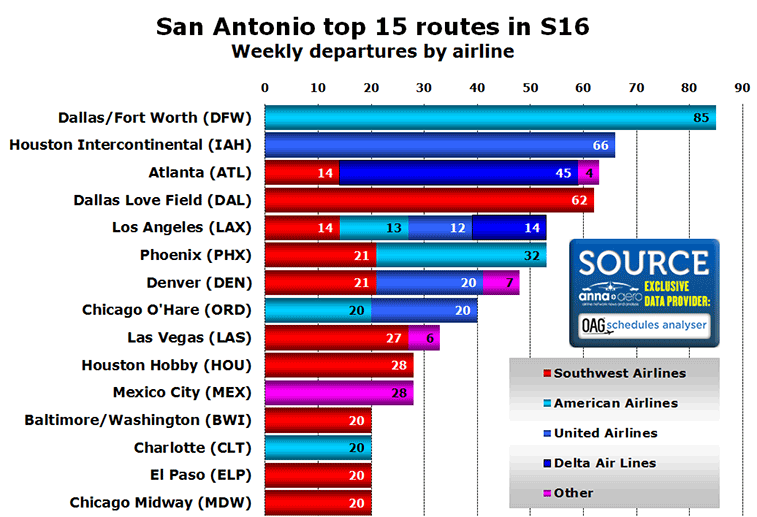 Looking ahead there is only one new route on the horizon. Southwest has announced that it will begin daily service to Kansas City from 6 November. Eight of the top 15 destinations are served by just a single carrier. Passengers wanting to fly to Los Angeles have the most choice with the airport’s four leading airlines all operating twice-daily flights on weekdays. With the equivalent of four daily flights, Mexico City ranks as the best served non-US destination.

According to the latest report (for 2015 Q4) by the US Department of Transportation’s Office of Aviation Analysis, San Antonio’s fare premium is a modest +4%. This compares favourably with Austin-Bergstrom (+6%), but is not as good as Houston Hobby (+1%), Dallas/Fort Worth (+1%), or Dallas Love Field (-12%). Also, in the fourth quarter of both previous years San Antonio’s fare premium was around the 1% mark. 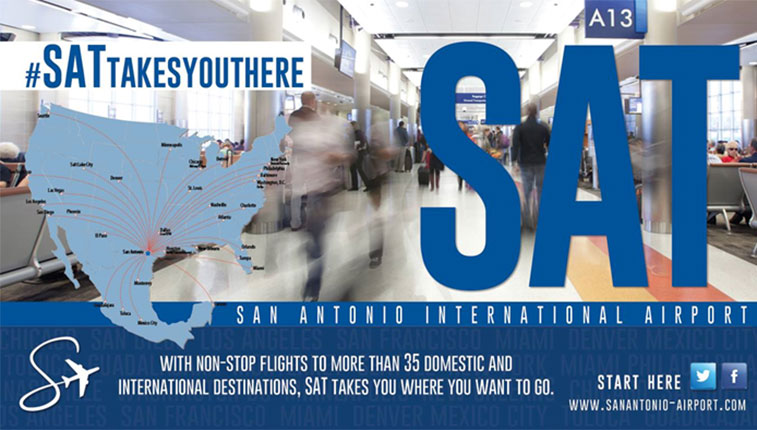 While San Antonio offers non-stop flights to well over 30 destinations across the US and Mexico there are some notable gaps, such as Boston, Portland and Salt Lake City.