German seat capacity up 8% this summer; Berlin Schönefeld, Cologne Bonn and Memmingen growing fast in 2016 thanks to LCCs 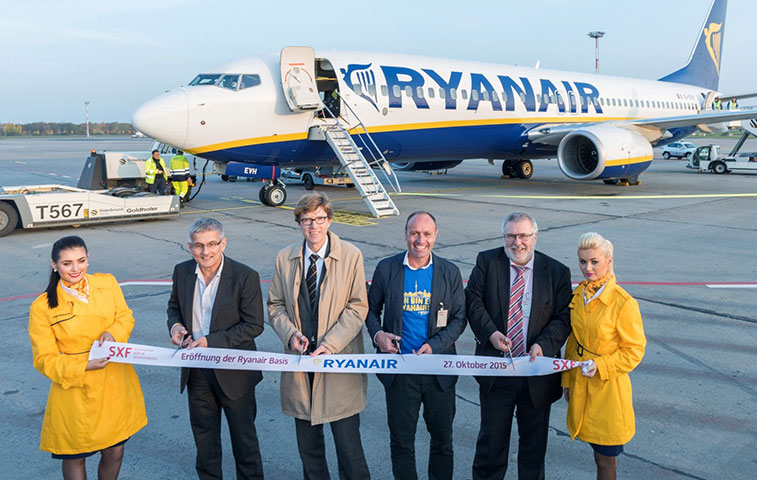 The growth of Ryanair and Berlin Schönefeld are closely linked. Last October Ryanair made the airport a major base generating a 40% increase in passenger traffic in the first four months of this year. The ULCC will be launching more routes from the capital city airport in September and October resulting in non-stop service to 45 destinations from Schönefeld in W16/17.

Germany’s airports handled over 215 million passenger movements in 2015, making it Europe’s second biggest market after the UK (over 250 million) but ahead of Spain (207 million). Growth in recent times has been modest, but consistent. In only two of the last 36 months (March 2014 and November 2015) has there been a year-on-year fall in monthly passenger numbers. However, during the same period growth has only once exceeded 6%, and that was in February of this year which benefited from having an extra day in it, thus automatically generating a 3.6% increase regardless of other factors. 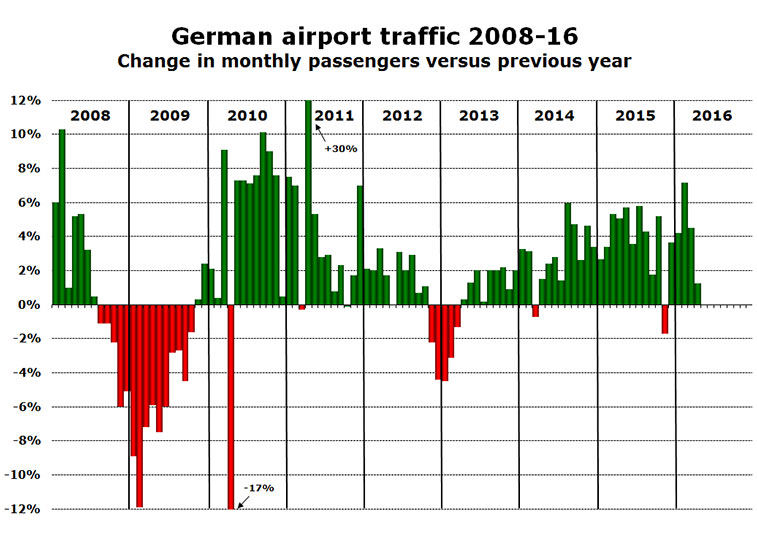 Passenger data for German airports in the first four months of this year shows that 14 of the country’s top 20 airports are reporting growth, with three of them seeing passenger increases of more than 20%. While all nine of the biggest airports are growing so far this year, six of the next 10 are showing a fall in passenger numbers, typically of between 4% and 5%. 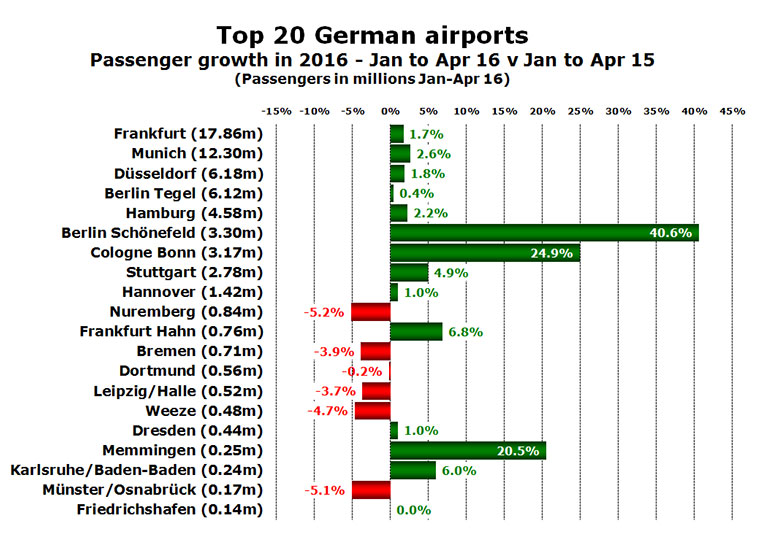 The three fastest-growing airports at Berlin Schönefeld (+41%), Cologne Bonn (+25%) and Memmingen (+21%) are all benefitting from growth by LCCs. Ryanair made Berlin’s second airport a base at the start of the W15/16 season and this summer serves 27 destinations from the airport, up from just eight last summer. Cologne Bonn became a Ryanair base at the start of the previous winter season (W14/15), but has seen flights more than double in S16 compared with S15, helped by the launch of multiple-daily flights to Berlin Schönefeld. Ryanair is also the biggest carrier at Memmingen, but here it is the growth of Wizz Air and the arrival of Aeroflot’s in-house LCC Pobeda that has driven the capacity growth this summer.

Top 20 airlines still the same, but some changes in ranking

Analysis of capacity data from OAG Schedules Analyser for S15 and S16 reveals that the same 20 airlines occupy the top 20 places this summer as last summer, though there has been movement within the top 20. Only two of the top 20 airlines (Condor and SAS) are registering a reduction in seat capacity compared with last summer, while for some carriers the number of available scheduled seats this summer is up by as much as 40%. While Ryanair’s impressive growth is no great surprise given its focus on the German market this year, the 40% growth in Austrian Airlines’ capacity at German airports requires further explanation. According to OAG data, this has come about because Austrian has taken over from Lufthansa the operation of three routes from Frankfurt, namely to Graz, Innsbruck and Salzburg. This accounts for the vast majority of Austrian’s growth at German airports this summer. The reduction in capacity by SAS can be explained by capacity reductions on 10 of its 17 German routes (particularly on its three routes to Frankfurt) far outweighing some small capacity gains on the other routes. 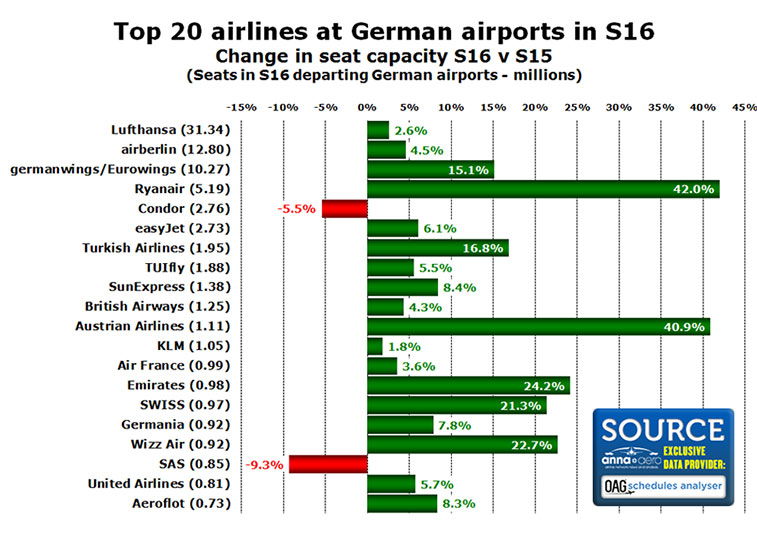 The biggest airlines just missing out on a place in the top 20 of German airlines are Vueling, Pegasus Airlines and SunExpress Germany. With its recently opened base in Munich, the Dutch part of Transavia (IATA code HV) leaps into 24th place just ahead of Norwegian (which now operates with both its DY and D8 code in Germany) followed by Aegean Airlines and Lufthansa partner airline Air Dolomiti. According to OAG data a total of 140 airlines are offering scheduled services from German airports this summer. 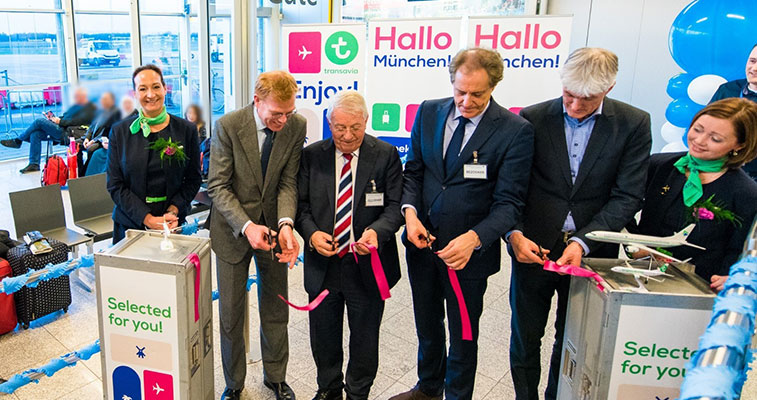 Transavia began serving Munich from Eindhoven on 19 February 2016, just over a month before the German airport became a proper base. This summer the Dutch-based carrier is operating around 85 departures each week from Munich across a network of 18 routes.