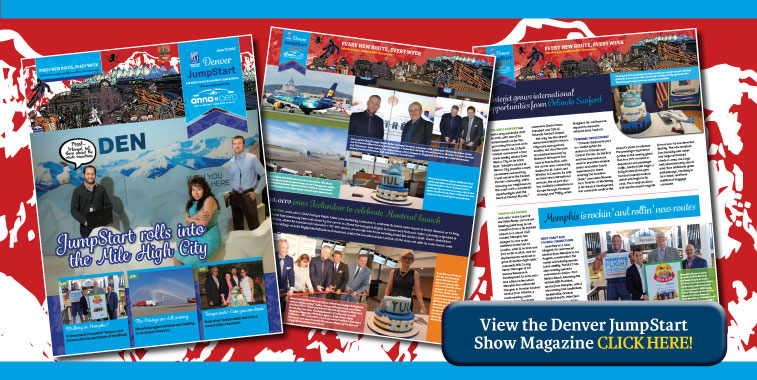 Read our electronic version of the anna.aero Show Daily magazine, created for the ACI-NA JumpStart Air Service Development Conference, hosted by Denver Airport. There are 28 pages to enjoy, including an interview with the hosts, some of our trademark analysis, as well as plenty of pre-show news.

Sandwiched neatly between Routes Europe in April (held in Krakow) and the IATA Slots Conference this month (in Hamburg next week), there is a North American air service development event ‒ ACI-NA JumpStart, hosted this year by Denver Airport. Attendance this year is record-breaking, with 500 air service colleagues assembled in Colorado, and representation from 31 airlines. As a result of this record attendance, there will have been more than 1,400 one-on-one meetings by the end of the conference, nearly 300 more than in 2015. The event, included an opening keynote speech from Barry Biffle, CEO of Frontier Airlines (and since earlier in 2016 the airline’s President). The delegate magazine is rammed full of coverage from attending airports, informative interviews, as well as an overview of what anna.aero is all about – not just cakes and fire truck water arches!