Flybe is the leading provider of UK domestic flights; growing in France, Germany and Netherlands as network develops to almost 200 routes 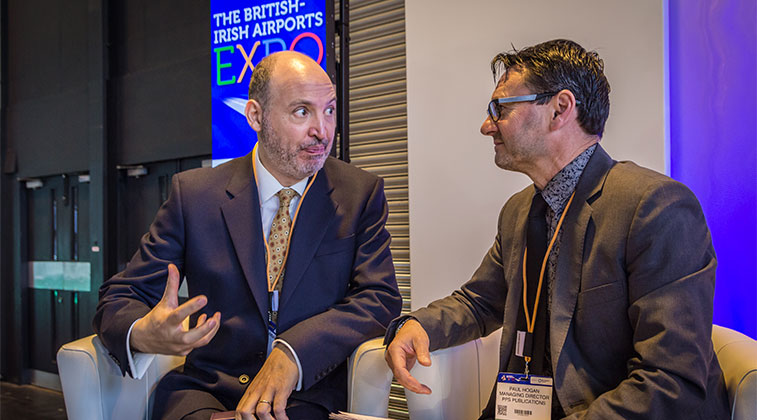 Asked to name the biggest airline operating domestic services in the UK many people would probably guess British Airways (BA), or maybe easyJet. However, last year one airline operated more UK domestic flights than BA and easyJet combined. That carrier is Flybe, which achieved the feat without operating any flights to the UK’s busiest airport at London Heathrow, and whose only significant presence in London is at London City Airport (though it does offer some routes from London Gatwick, London Southend and London Stansted). 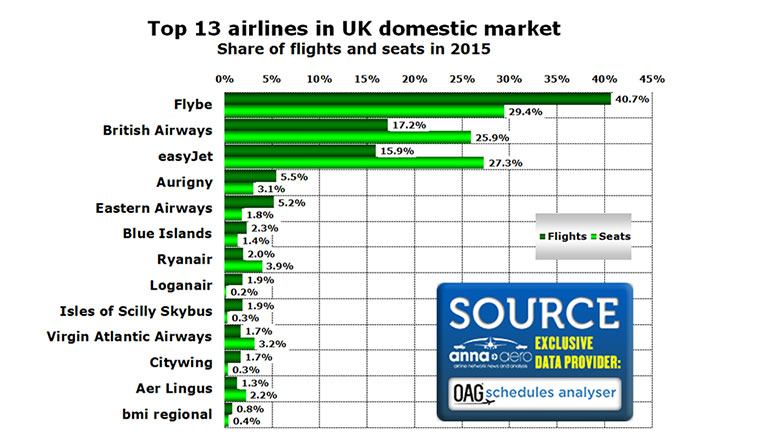 Last year Flybe, which recently announced improved financial results for the year-ending 31 March 2016, carried a total of 7.77 million passengers (at a load factor of 69.6%) according to UK CAA statistics, which is more than fellow UK airlines Virgin Atlantic Airways (5.8 million) and Thomas Cook Airlines (6.4 million). That means that two-thirds of Flybe passengers are travelling on domestic flights. 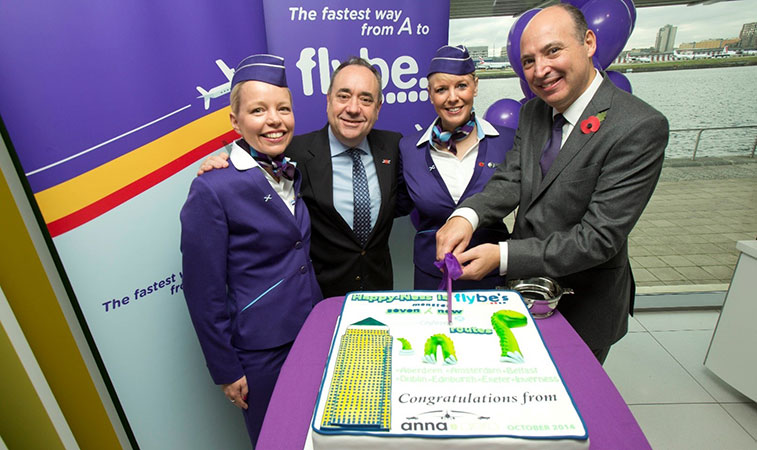 Despite only launching its London City base in October 2014, Flybe’s route to Edinburgh comes out top of the airline’s network if measured by ASKs (Available Seat Kilometres). Seen here cutting the anna.aero prepared celebratory cake were Alex Salmond, First Minister of Scotland and Saad Hammad, CEO of Flybe. London City is currently ranked only 13th among Flybe’s airports for weekly seats, while Edinburgh ranks fifth.

Capacity up by more than 10% this summer

Analysis of the airline’s schedule data for this summer reveals that Birmingham, Manchester and Southampton are Flybe’s biggest airports for weekly seat capacity. They are also the only airports from which the airline operates to more than 20 destinations non-stop. Of Flybe’s top 20 airports this summer just three are outside the UK (shown in bright green); one each in France (Paris CDG), Germany (Düsseldorf) and the Netherlands (Amsterdam). Across the airline’s network of 71 airports (some of which are only served on Flybe’s behalf by franchise partner Loganair), weekly seat capacity is up around 15% this August. 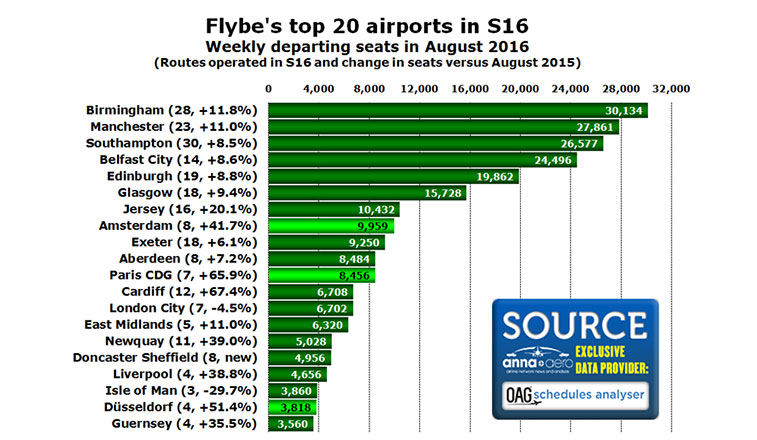 The airline’s new base at Doncaster Sheffield opened at the start of the S16 season, while Cardiff operations grew massively at the start of the S15 season with significant growth continuing into S16. The SkyTeam alliance hubs at Amsterdam and Paris CDG have also seen considerable year-on-year growth. Amsterdam has benefitted from increased frequencies on routes from Birmingham and Manchester, as well as new routes to Dundee and Doncaster Sheffield (though Bournemouth and Inverness services have been dropped). Paris has also benefitted from increased frequencies on existing routes, as well as new connections from Doncaster Sheffield, London City and Southampton, which all began at the end of March. 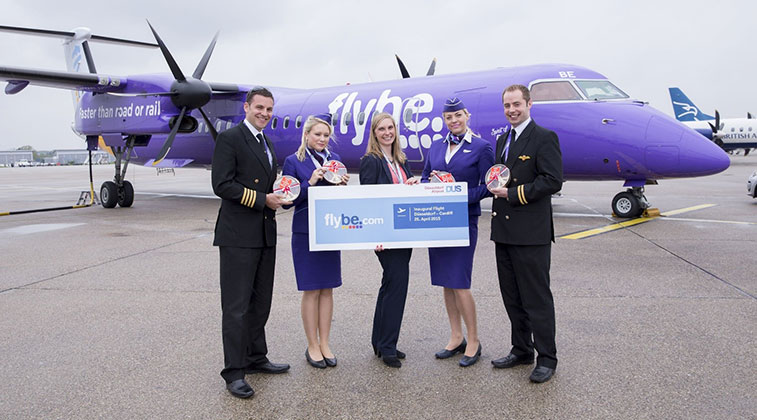 The introduction of based operations at Cardiff at the start of the S15 season resulted in the launch of six new routes (including Düsseldorf on 25 April) and the resumption of three others. It is worth noting though that this summer Flybe is operating only a few more weekly flights from the Welsh airport than it did back in the summer of 2008.

London City to Edinburgh is #1 route for ASKs

Despite international routes generating only one-third of Flybe’s passengers in 2015, if measured by ASKs (Available Seat Kilometres), which takes into account sector length, frequency and aircraft size, seven of the airline’s top 15 routes this summer involve airports in mainland Europe (shown in bright green). Of the eight UK domestic routes in the top 15, all but one involve airports in Scotland; either Aberdeen, Edinburgh or Glasgow. Nine of the top 15 routes also feature Birmingham, the airport’s biggest base by weekly seats. Maybe curiously, the airline’s biggest route by ASKs links the airports that rank just fifth and thirteenth in terms of weekly seats. With such a diverse route network Flybe’s #1 route generates only 64% more ASKs than the route ranked fifteenth. 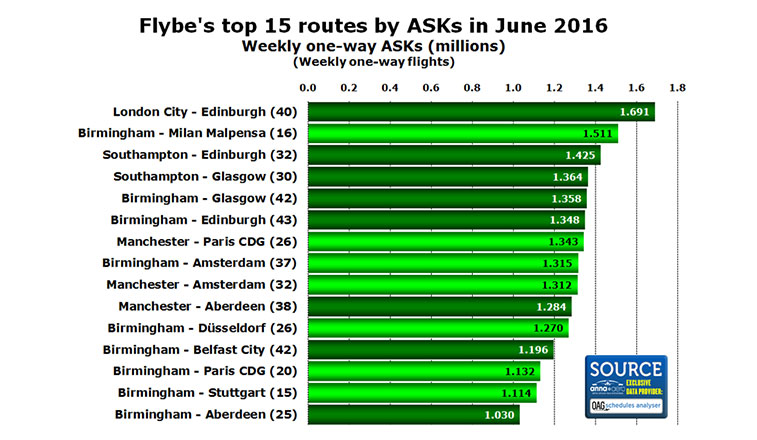 Analysis of OAG schedule data reveals that the Flybe network has grown from 172 routes in August 2015 to 188 routes in August 2016, a net gain of 16 routes. This is achieved by the launch of some 34 new routes and the termination of 18 routes, many of which were operated from the now closed Bournemouth base. Other routes that the airline has chosen to end during the last 12 months include; two routes to Deauville, Inverness to Amsterdam, London Southend to Münster/Osnabrück, and Belfast City to Newcastle (which actually ends on 30 June). Apart from eight new routes from Doncaster Sheffield Flybe has also started the following routes so far in 2016.

None of these route faced direct competition when they were launched, though two of the routes from Doncaster Sheffield (to Alicante and Malaga) were already being flown by Thomson Airways.

Flybe’s first ever scheduled service to Rotterdam (from Manchester) was welcomed at the Dutch airport on 8 February 2016 by this water arch salute. Surprisingly the airline did not use one of its ‘purple’ Q400s for the inaugural flight. There was also a celebratory cake (which DID feature a ‘purple’ Q400), though hopefully the flight path taken on the route will not be quite as circuitous as that shown on the cake.

By the start of the winter season at the end of October, Flybe will have launched several more new routes. In July, the carrier is set to start three new routes to France, connecting Southampton with both Biarritz and Toulon, while also linking London City with Rennes. In August, Manchester will get a direct service to Lyon, while Flybe will also begin linking Hannover in Germany with both Lyon and Milan Malpensa. Meanwhile, September will see the introduction of flights to Luxembourg from both Birmingham and Manchester while Rotterdam will also be connected to Birmingham. The fact that all of these routes are international and two of them are connecting cities in mainland Europe, may give a clue as to the airline’s future direction with regard to network development. 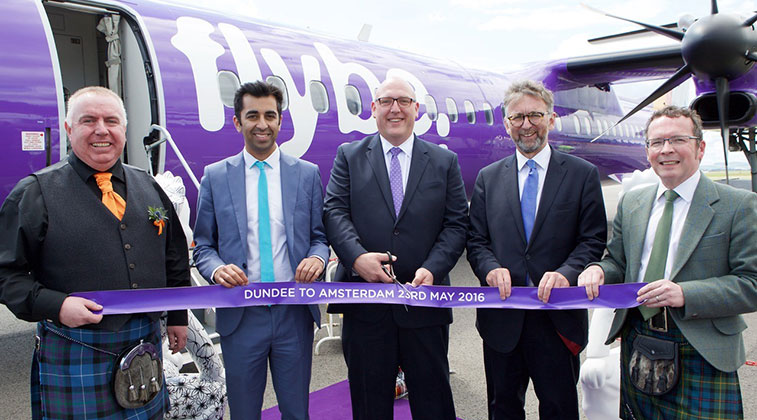 Flybe became the first carrier to operate international scheduled flights from Dundee when it began serving Amsterdam from the Scottish airport on 23 May. This is Flybe’s second route from the airport as it also flies daily to London Stansted. In the past Flybe has also served Dundee from Belfast City, Birmingham and Jersey.