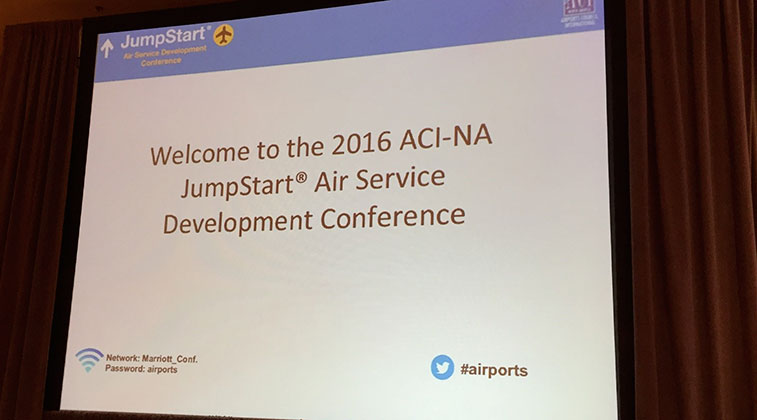 The first address of the conference on 13 June was made by Justin Meyer, Deputy Director of Aviation – Marketing and Air Service Development, Kansas City Aviation Department. Meyer is also Chair of ACI-NA Marketing and Communications Committee. In his address he thanked everybody for their attendance. “We are bridge builders, bringing communities and business across this nation together,” highlighted Meyer. “This conference allows for the foundations to be established in creating a new service.” Next up at the podium was Kevin Burke, President and CEO, Airports Council International-North America, who was recently interviewed by anna.aero in relation to this year’s event. “It is a great time for aviation in North America. In the past two and a half years I’ve not been on an empty flight, showing that we as a nation are continuing to travel in our strides,” showcased Burke. Another highlighted of Burke’s opening comments was that ACI-NA supports openskies saying: “It’s healthy for business.” 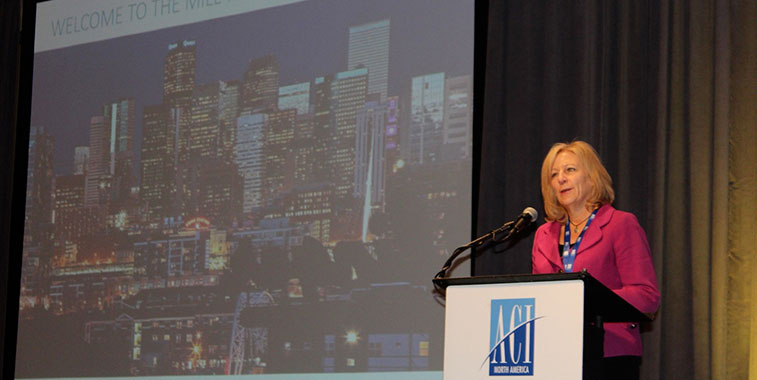 Once Burke had made his opening address, it was then time for Kim Day CEO of Denver International Airport to welcome the 500+ delegates to Denver. Day promoted to delegates the new services which had opened up from Denver during the past few months including new international routes to Montreal and Munich, and the welcoming of new carriers including Virgin America and Sun Country Airlines. One of the latest launches from the airport which launched on the day after the conference was with Frontier Airlines to Pittsburgh. The keynote airline CEO to speak at this year’s JumpStart® was Barry Biffle, President and CEO of Frontier Airlines. His highlights included how the airline has restructured during the last few years, and how the airline is starting to integrate the A320neo into its fleet. “Over the next five years we expect to double the airline’s size,” highlighted Biffle. “54% of our business is VFR traffic, with 37% being vocation traffic. The rest is business.” 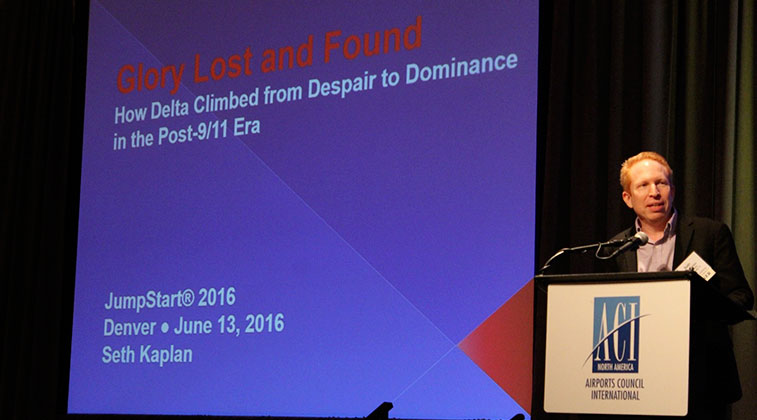 Next to speak was Seth Kaplan, Managing Partner of Airline Weekly. In his presentation, Kaplan spoke about how Delta Air Lines had climbed from despair to dominance in the post 9/11 era and how the SkyTeam member managed to get back to its pre-eminence before the attacks despite high fuel prices, a hostile takeover bid, relentless competition, economic meltdowns and geopolitical shocks. During the Monday afternoon of this year’s JumpStart®, presentations were kicked-off by James Bowden, Regional Director, Marketing Analysis & Forecasting, Boeing. During his presentation, he gave an overview forecast of the North American market heading towards 2034. Bowden stated that the North American market would grow towards 2034 at a modest rate of 2.4% year-on-year, while carriers in other areas of the world including China, India and the Middle East would grow at double-digit rates for this year. Another interesting comment from Bowden’s presentation was that US LCCs and Canadian carriers were growing in excess of 7% year-on-year, with overall traffic and capacity up approximately 5% in Q16 vs. Q15. The next afternoon speaker was Chris Hedlin, Manager Network Planning, WestJet. Hedlin’s presentation focused on the growth of WestJet from having just three 737-200s in 1996 to now having 151 aircraft in 2016, made up of 117 737s, 30 Q400s in its Encore division, and four 767-300s to operate its new transatlantic venture to London Gatwick from six points in Canada. “What is exciting for WestJet is that we’re going to be one of the launch customers of the 737MAX which will open up a sphere of possibilities,” commented Hedlin. This year the carrier has added 19 new markets and has extended three winter markets into year-round service. Between its main division and its Encore operation, WestJet will be operating on average 622 daily departures in 2016, serving 101 destinations. This means that in terms of destinations served, WestJet is the 40th largest carrier in the world. Next to the podium was Matthew Maquire, CEO of OneJet. The airline officially commenced service last year from its primary base in Pittsburgh. One of the key topics discussed by Maquire was how the airline was evaluating its market selection. “OneJet is focussed on primary O&D markets with a size of around 20-100 passengers daily each way (PDEW). After his presentation, Maquire was then questioned by Bryan Dietz, VP Air Service Development, Pittsburgh Airport. One of the main focusses of Dietz’s questioning was about OneJet’s expansion plans. “We have more growth coming next year and by the end of 2017 we’ll have around 15-20 aircraft,” answers Maquire. 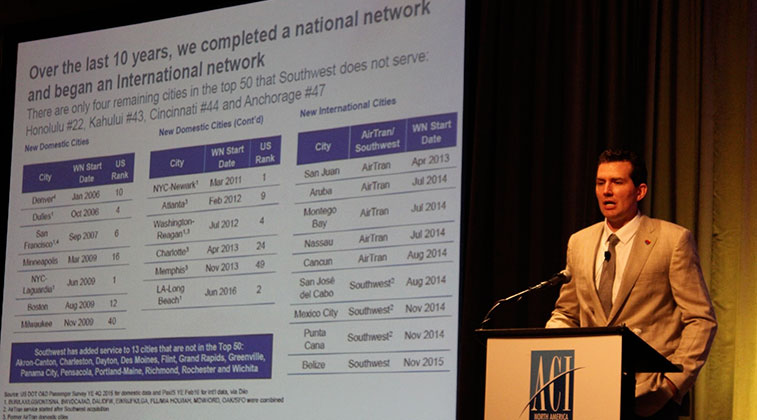 The following presentation to OneJet was conducted by Southwest Airlines, with the carrier’s MD Business Development David Harvey conducting the presentation. One of the interesting facts of Harvey’s presentation was that there are only four of the US’ top 50 airports which it does not serve: Honolulu, Kahului, Cincinnati and Anchorage. Out of those 50 airports, Southwest Airlines is the largest carrier at 24 of them, beating Delta Air Lines into second, with the SkyTeam member only being the leading carrier at nine of the top 50 airports. 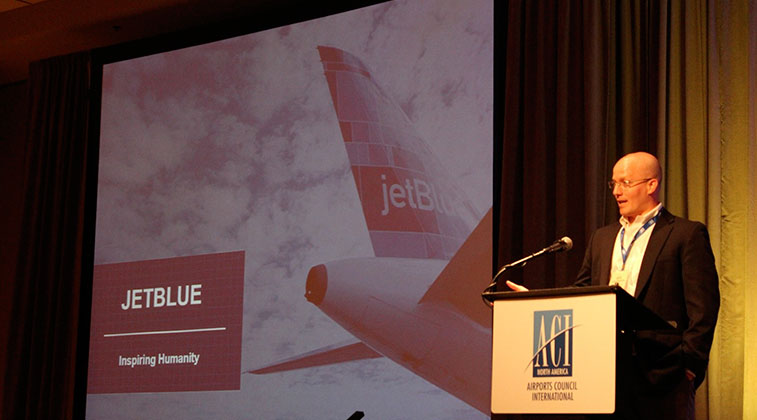 The final presentation of the day was made by John Checketts, Director of Route Planning at JetBlue Airways. Highlights of Checketts’ presentation included the airline surpassing 200 aircraft, with it now having 217 in its fleet made up of 130 A320s, 27 A321s (with seven more joining the fleet by year-end) and 60 E190s. 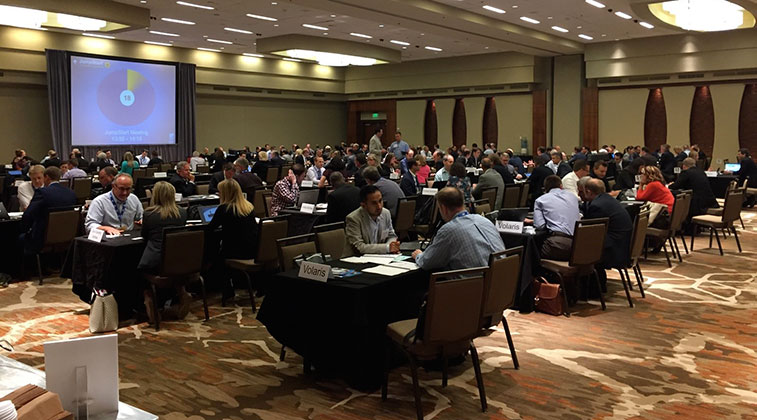 The following day is when meetings commenced with over 1,300 one-on-one meetings taking place. Airlines taking part in this year’s JumpStart® included carriers attending for the first time such as Elite Airways, OneJet, and PenAir. 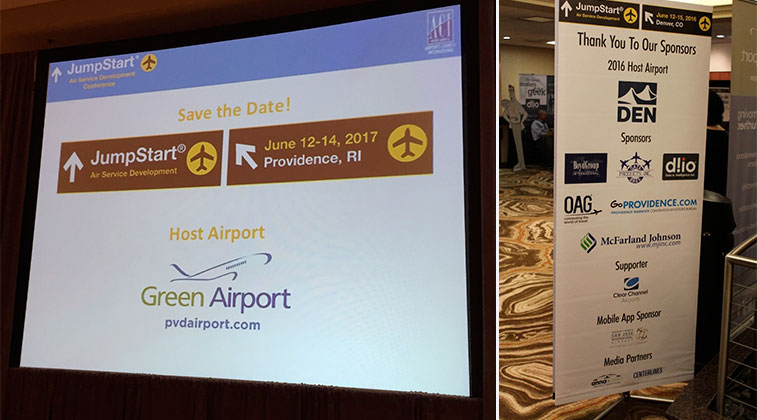 Next year’s JumpStart® event will be taking place in Providence Rhode Island, hosted by Green Airport. 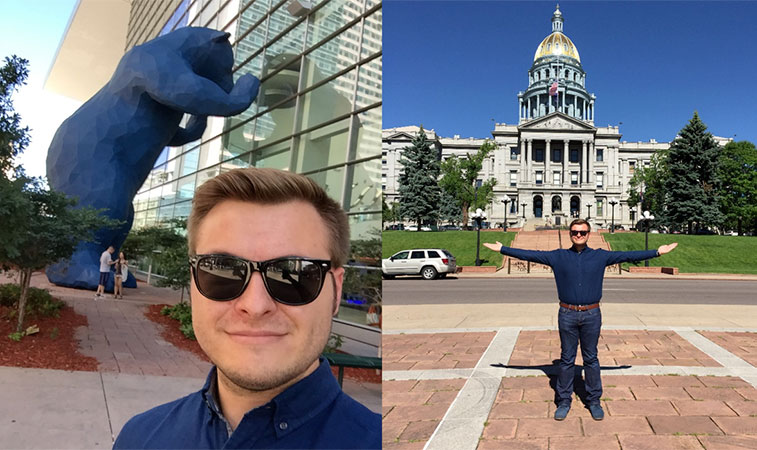 anna.aero would like to thank Denver for being such a fantastic host for this year’s JumpStart Conference, and to prove that anna.aero was there, here is roving reporter and Assistant Editor Jonathan Ford posing with the Big Blue Bear and Colorado State Capitol Building in the Mile High city.