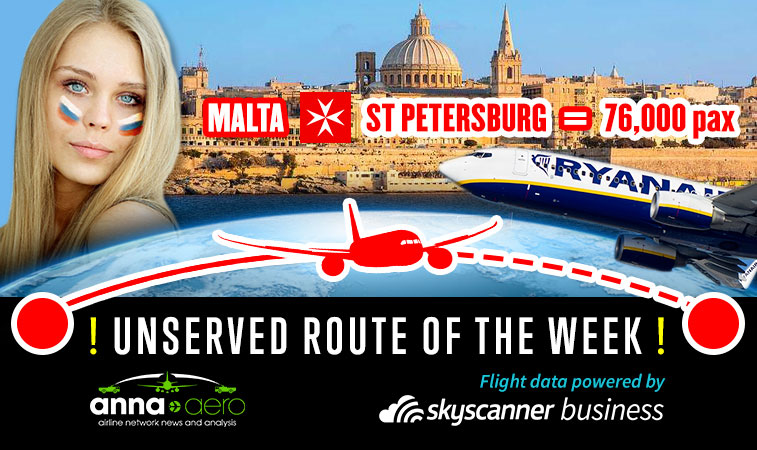 Come on Ryanair, surely you can’t be scared of revolution? Ryanair is Malta’s #1 airline, 76,000 mainly-Russians searched Skyscanner last year looking for ways to get from St Petersburg (pop 5 million!!) to Malta, Russians are desperate for new sunny markets after losing Turkey. Give it a try!!!

With 76,000 mainly-Russian searches last year, a potential new route from Malta to St. Petersburg has been identified as this week’s Skyscanner for Business-anna.aero “Unserved Route of Week” – a powerful new kind of analysis based on aspirational data captured from the Skyscanner.net flight comparison site used by +50 million unique visitors per month. 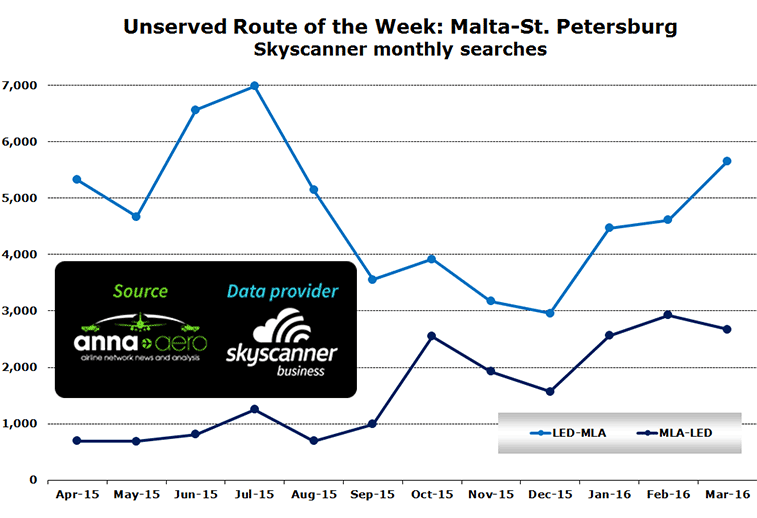 anna.aero thinks this would be a great Ryanair Russian experiment

With significantly more traffic originating from the Russian end of this route ‒ a 75/25 split – this city pair is an obvious option for Aeroflot, which is the #1 airline (47% share) at St Petersburg Pulkovo in terms of weekly seats, and currently offers services to 24 international destinations from the airport, according to OAG schedules data for the week commencing 14 June. The Russian national carrier would be also able to offer significant connections at its second biggest hub (only its Moscow Sheremetyevo operation is bigger), in particular to its 24 domestic destinations, as well as the point-to-point traffic from a city of 5 million population (St Petersburg is Europe’s fourth-biggest city and over 10 times bigger than Malta which at 425,000 is the EU’s smallest country).

The second largest carrier (9.3% share) at St Petersburg Pulkov, S7 Airlines, is unlikely to begin operations on this route, as it currently only offers two domestic routes from Pulkovo – to Moscow Domodedovo and Novosibirsk. Perhaps the potential route is more likely to be picked-up by the #3 carrier (8.7% share) Ural Airlines, which currently offers a network of 22 destinations (eight domestic), including leisure destinations similar to Malta like Larnaca, Palma de Mallorca and Rhodes.

At the Maltese end of the route Air Malta is the only carrier actually operating between the two countries – a twice-weekly service to Moscow Sheremetyevo, so presumably another Russian route is not beyond comprehension. Ryanair is Malta’s #1 airline (by 351 seats in the week in question!) but is unlikely to venture into Russia from Malta as it probably does not want to be exposed to the risks uncontrolled changes that can of a regulated market. anna.aero does not agree – Ryanair has entered plenty of radical and crazy markets in the past – who not give this demand for 76,000 Russians a try – they are desperate for new places to go after being banned from their beloved Turkey.

When looking at the previous year of search data, the busiest month for potential traffic flows (for both directions on the route combined) is March 2016 with over 8,000, nearly 4,000 higher than the lowest monthly figure, which was recorded in December 2015 (4,500). The seasonality profile of this search data is slightly less extreme than last week’s Unserved Route of the Week (Lisbon to Tenerife), with the low-month traffic representing 54% of the highest month. According to OAG Traffic Analyser, because there is no direct service, the top three connecting options chosen by those passengers who did book travel between St Petersburg to Malta in the last 12 months were Frankfurt (41%), Moscow Domodedovo (17%) and Riga (11%). Interestingly 19 different airports were used by passengers desperate to fly between the two cities.

An O&D that is not served by a non-stop flight will typically display a low purchase rate and low traffic. In this instance Skyscanner’s Travel Insight indicates a monthly average of just 6.7% for the Malta to St. Petersburg route (see graph below). Therefore, if there was a Malta to St. Petersburg route, and if bookings performed in line with the “Skyscanner market average” for direct services at both airports (10.2%), the airline operating this route could immediately expect an improved purchase rate of 51% without any increased marketing spend. However, with nearly 76,000 annual searches, the potential city pair should already be very sustainable. 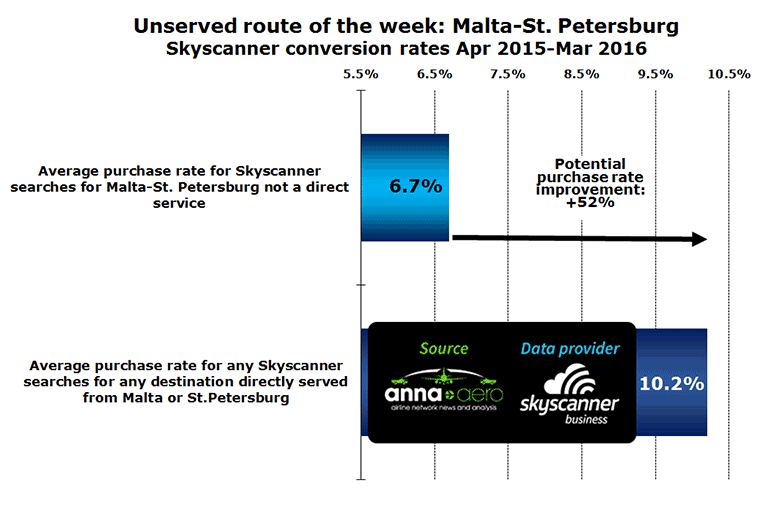