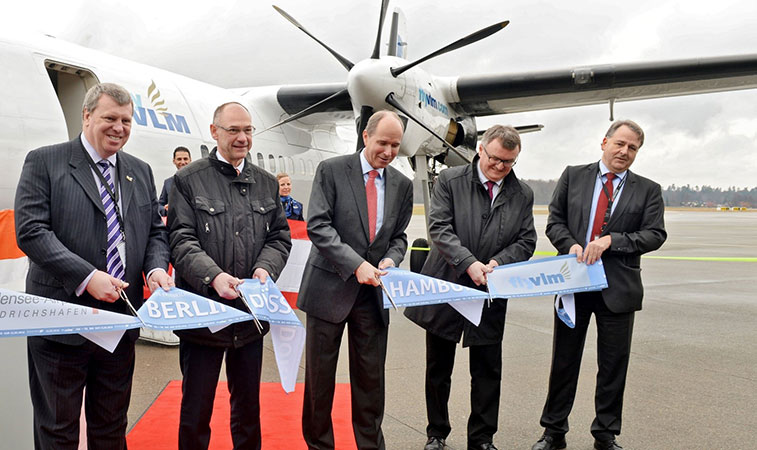 Back in February Friedrichshafen Airport was celebrating the launch of VLM’s new services to Berlin, Düsseldorf and Hamburg. These routes had previously been flown by InterSky, another regional airline that ceased operations last November.

VLM announced on 22 June that it had ceased operations. The European regional carrier, which we profiled back in February, operated a small fleet of Fokker 50s and had been operating just five routes at the time of its demise. Since February, according to OAG Schedules Analyser data, the airline had ended flights between Hamburg and Rotterdam on 8 April, between Birmingham and Waterford on 5 June and between London Luton and Waterford on 7 June. This left just five routes; two from its Antwerp base and three from Friedrichshafen in southern Germany.

The three Friedrichshafen routes were only started in mid-February after the collapse of another small, regional, European airline, InterSky. According to OAG data VLM was actually the fourth biggest airline in the German domestic market in terms of weekly flights. Its 68 flights represented 1.34% of all German domestic flights, well behind Lufthansa (49.1%), airberlin (25.8%) and germanwings/Eurowings (19.3%). However, in terms of seat capacity, VLM’s share was just 0.47%, dropping it to sixth place, now also behind Ryanair (1.57%) and Transavia (0.63%).

On 27 April 2015 VLM had started flying to Waterford in Ireland from both London Luton and Birmingham. Both route launches had been celebrated with shamrock-inspired cakes.