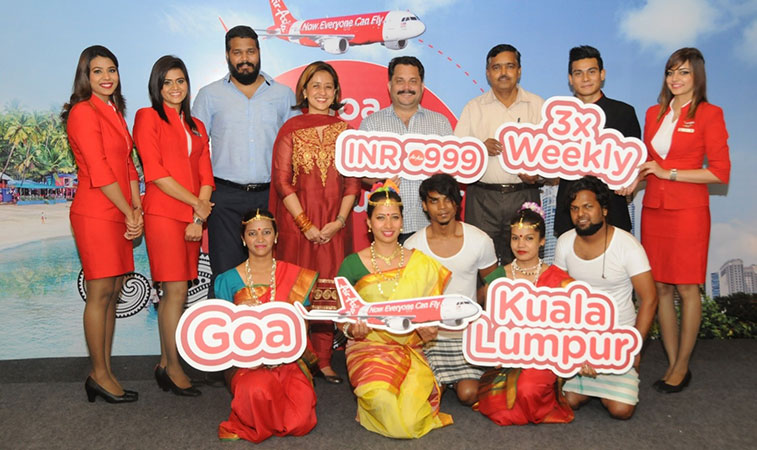 On 27 August 2015 AirAsia became the first Asian carrier (outside of India) to serve Goa International Airport. The route was launched with thrice-weekly flights. Sadly the Malaysian LCC announced in May that it would stop operating the route in early June, less than a year after starting the service. International routes accounted for 12% of the airport’s passengers in the year ending 31 March 2016.

Located on India’s south-west coast, Goa International Airport (also known as Dabolim Airport) is the main airport for the small Indian state of Goa, which between 1510 and 1961 was an enclave of Portugal. In the year ending 31 March 2016 the airport handled almost 5.4 million passengers, ranking it tenth among Indian airports, just behind Pune, which overtook it last year. The previous year Goa had been ranked ninth.

In the last decade passenger numbers have tripled with the airport handling under 1.7 million passengers in 2005/06. Demand fell by 14% in 2008/09 and was virtually unchanged in 2012/13, but annual growth has been greater than 14% in seven of the last 10 years as India’s air travel market has grown rapidly. 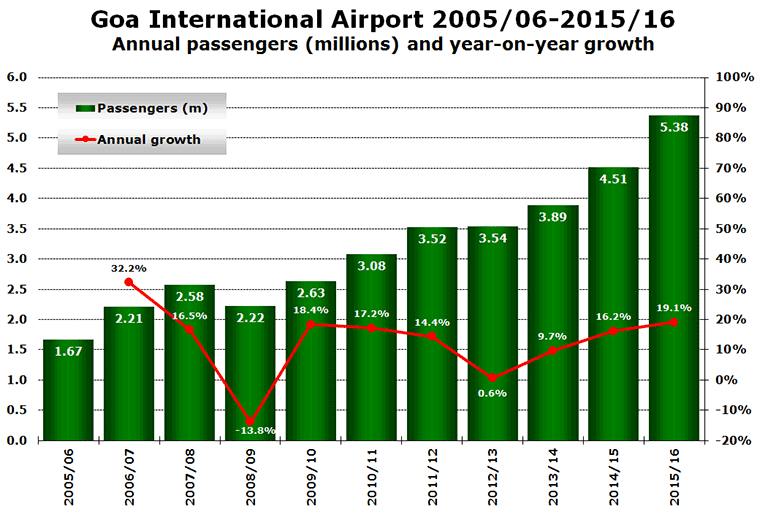 In each of the first four months of 2016 passenger numbers have been up at least 20% compared with 2015, with the latest figures for April showing a massive 30.5% increase in demand. The airport’s SVID score (Seasonal Variation In Demand) is a “good” 2.97. The airport’s busiest months are between November and March. Goa is a popular tourist destination for both locals and foreigners especially during the winter season. 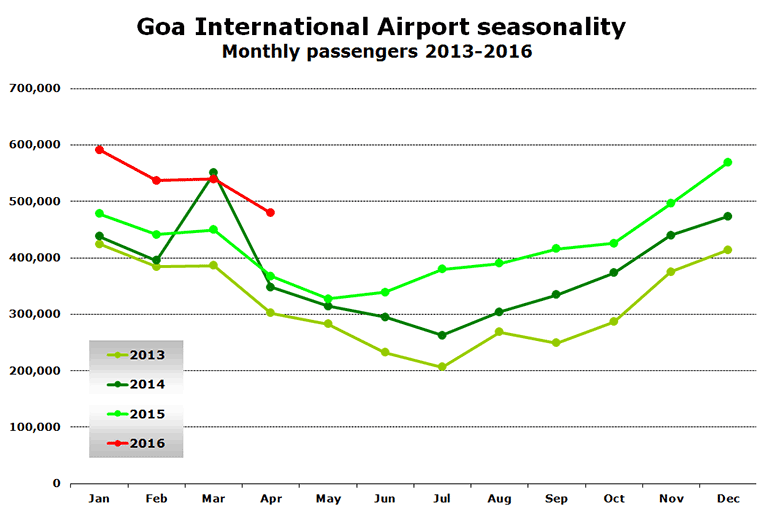 Analysis of OAG Schedules Analyser data for January (the airport’s busiest month) reveals that in terms of weekly seat capacity IndiGo, India’s biggest domestic airline, leads the way with almost twice as much capacity as the next carrier. IndiGo serves six domestic points, as does SpiceJet. The top eight carriers are all local while the remaining seven carriers are all from abroad. There are three carriers from the Middle East serving Goa (Air Arabia, Oman Air and Qatar Airways) and also three from Europe (Finnair, Thomas Cook Airlines and Thomson Airways). The two UK leisure airlines only operate flights during the winter months. The newest carrier was AirAsia which began thrice-weekly flights from Kuala Lumpur in Malaysia on 27 August 2015. However, the service was terminated earlier this month. 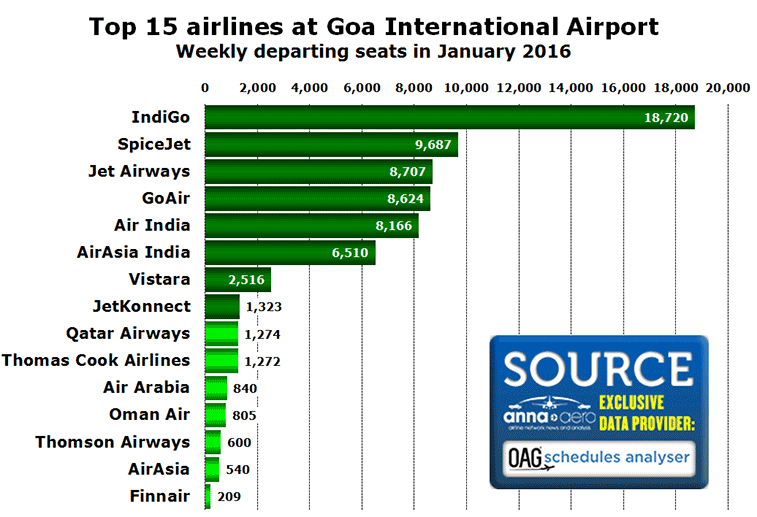 Mumbai and Delhi are the airport’s top two routes, with capacity on the 425-kilometre route to Mumbai accounting for just over 40% of the airport’s total weekly seat capacity. Seven airlines serve the Mumbai market with Vistara, the newest of the seven, having started daily flights on 17 July 2015. Six airlines compete on the 1,503-kilometre route to Delhi, with Vistara (20 February 2015) and AirAsia India (21 May 2015) the two newest carriers serving the market. Delhi accounts for a further 24% of weekly seat capacity. 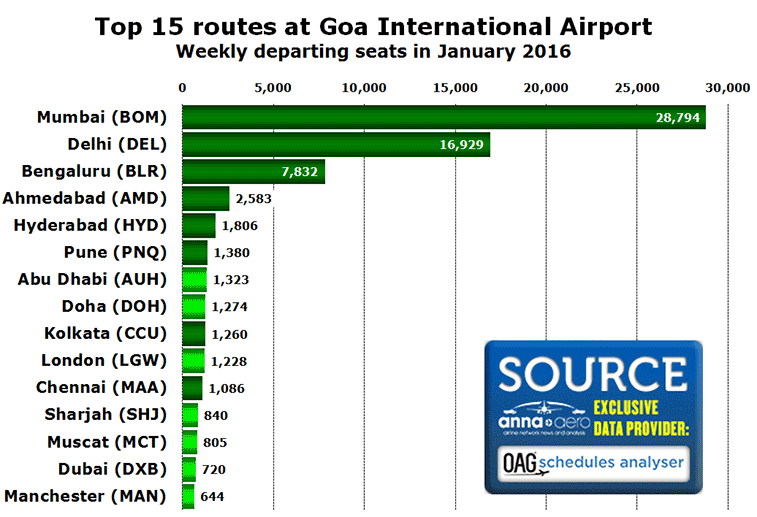 The top six routes are all domestic with Abu Dhabi (served by Jet Airways since November 2014) the leading international destination. Qatar Airways’ service to Doha comes next among international routes (shown in bright green) followed by London Gatwick which is served by both Thomas Cook Airlines and Thomson Airways. Although neither Emirates nor flydubai serve Goa, there is a four times weekly service to Dubai operated by Air India.

Despite the impressive growth so far in 2016 no new services have been launched by airlines. The only new service on the horizon is a seasonal operation by Thomson Airways from Manchester which is set to launch in early November, a route already served by Thomas Cook .