Air Austral became the latest operator of the 787-8 in May. Commenting on the arrival of the aircraft into its fleet, Marie-Joseph Male, Executive Chairman and CEO, Air Austral, said: “The start-of-the-art 787’s unique capabilities enable us to launch the Dzaoudi to Paris CDG route. This aircraft is the most advanced in the world, with superior operating economics all while providing our passengers an unrivalled on-board experience.”

Deliveries during the fifth month of 2016 between Airbus and Boeing totalled 128 units, 22 more aircraft than were delivered during the fourth month of this year by both companies, but equal to that delivered in March. During May, Boeing distributed 71 aircraft, with the European manufacturer garnering a total of 57. The result means that so far in 2016 Boeing has delivered 67 more aircraft than Airbus, increasing its lead by 14 units when compared to April’s difference between the manufactures. Boeing’s May delivery total is 11 units more that what it delivered in the same month of 2015, while Airbus delivered 10 more aircraft when compared to May last year. Overall 74% of deliveries in May were narrow-body aircraft, with the remaining 26% being wide-body. Looking at the wide-body market for May, Boeing produced 73% of aircraft (up from 63% in April), while Airbus produced the remaining 27%. 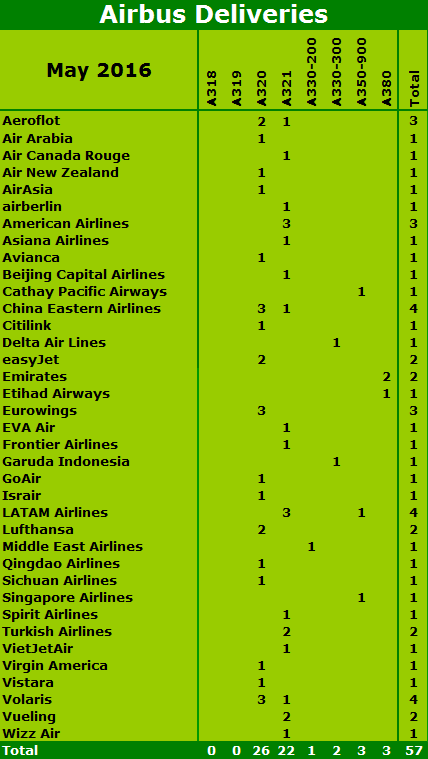 Airbus ended May with a total of 57 unit deliveries, which is five more than what the company delivered in April, and 10 more than what was distributed by Airbus during the corresponding month of last year.

In April, single-aisle deliveries were led by the A320 (26 units – one more than April), while the A321 followed in second place (22 units), with a grand total of 48 single-aisle aircraft being provided to carriers around the world. It should be noted that no A318s or A319s were delivered. This means that Airbus produced one more narrow-body aircraft than Boeing in May. A total of 17 airlines received A320s (up one from the total of April), with China Eastern Airlines, Eurowings and Volaris being the largest recipients of the variant, with the trio picking up three each. In relation to A321 deliveries, 16 carriers picked up the type (four more than April), with American Airlines and LATAM Airlines being the biggest customers by each collecting three units. Aeroflot, China Eastern Airlines and Volaris were the only carriers to pick up an A320 and A321 in May. LATAM was also the only carrier to welcome both narrow-body and wide-body aircraft from Airbus, with it also collecting an A350.

Looking at wide-body deliveries, Airbus handed over nine airframes in May, ten less than in April. Following on from the delivery of three A380s in the fourth month of this year, the European producer handed over three again in May, with two aircraft going to the world’s leading A380 operator Emirates, while the other was handed over to fellow UAE carrier Etihad Airways, the same as in the previous month. The best performance of wide-body deliveries in May however was the A380 and the A350, with a total of three of each type being delivered. Cathay Pacific Airways, LATAM and Singapore Airlines each picked up one. 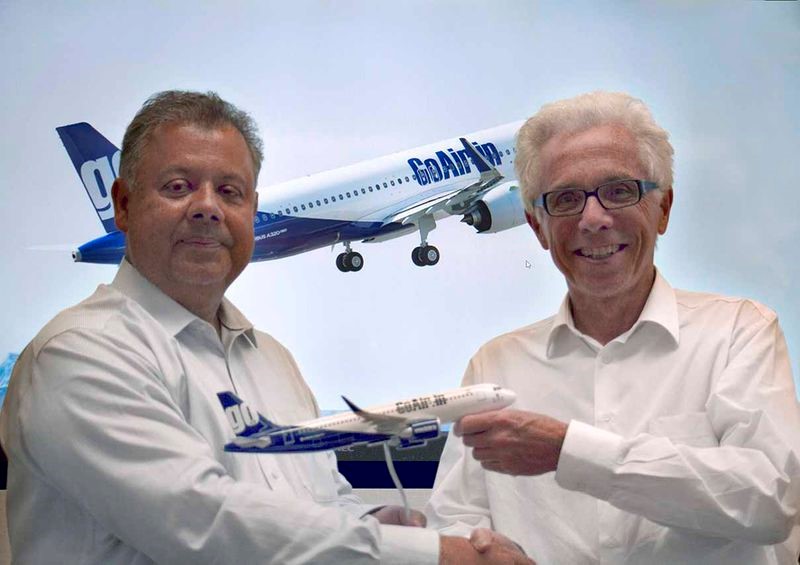 Indian LCC GoAir welcomed the first of 72 A320neos in May. Seen celebrating the arrival of the first aircraft, in model form, are Kiran Rao Airbus EVP Strategy and Marketing, and GoAir CEO Wolfgang Prock-Schauer. 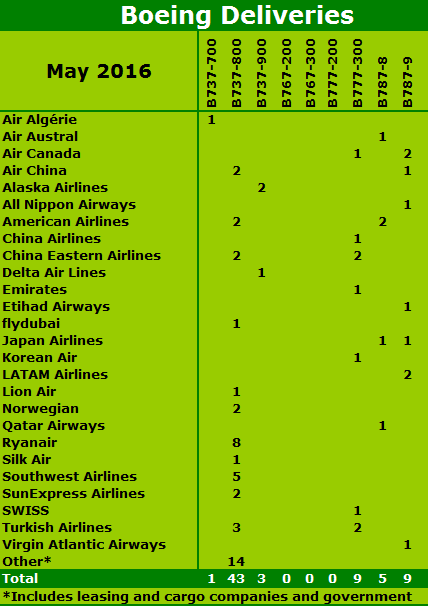 Boeing closed May with a total of 71 unit deliveries, 17 more than in April, and 11 more than in the corresponding month of 2015. Airlines received a total of 47 single-aisle units from Boeing in May, 12 more than March. A total of 43 737-800s were delivered, while only three 737-900s were. Ryanair was the largest recipient of the 737-800 in May, the same as it was in the three months previous, with it picking up eight of the variant into its fleet. This means that for 2016 Ryanair has welcomed 40 737-800s. In total, 13 airlines were delivered single-aisle units from the American manufacturer during May, two less than in April. Nonetheless it should be noted that 14 737-800s were delivered to leasing companies.

An analysis of wide-body deliveries reveals that Boeing handed over a total of 24 units to airlines in May, five more than in April. Boeing handed over 14 787s in April, four more than the month previous. Air Canada and LATAM Airlines were the largest recipient of the 787-9 in, with the Star Alliance and oneworld members picking up two of the type each. Of May’s 787 deliveries, only five were -8 variants, with American Airlines being the largest recipient, picking up two of the type. One 747-8 was handed over in May to Korean Air, the first delivery of the type since January.