Billund-Madrid is “Skyscanner Unserved Route of the Week” – 46,000 searches in past year; Iberia? – or Ryanair to return?? 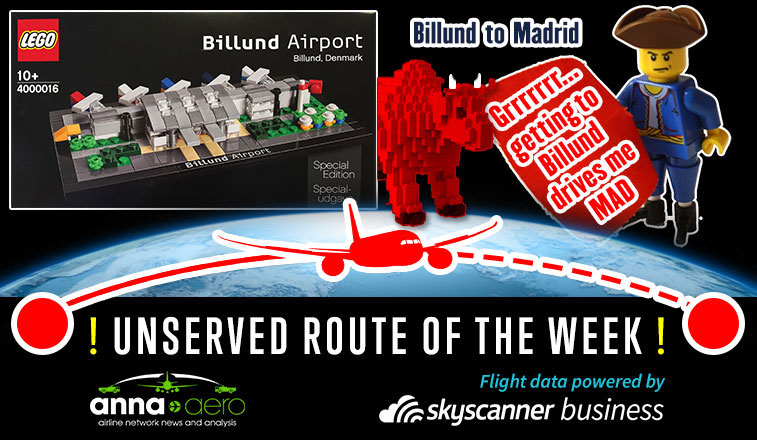 The matador is unhappy because he can’t get from Lego’s worldwide headquarters in Billund to his sales and marketing distribution centre in Madrid. If Iberia (or indeed Iberia Express) operated a service he could also use its Madrid hub to reach Lego’s globally-important manufacturing plant in Mexico. Ryanair also has all the building blocks needed to operate this route having axed this very service after two years in 2008.

With 46,000 searches last year, a potential new route from Billund to Madrid has been identified as this week’s “Skyscanner for Business-anna.aero Unserved Route of the Week” – a powerful analysis based on aspirational data captured from the Skyscanner.net flight comparison site used by +50 million unique visitors per month. Speaking on the sidelines of last week’s 138th Slot Conference in Hamburg, Jesper Klausholm, Billund Airport’s Head of Airline Relations and Marketing, was confident of the route’s potential to succeed. “There is a solid base of business traffic on the city pair, even Ryanair used to see high proportions of business travellers on the route [which carried 30,000 passengers annually]. Also there are lots of Danes living in Spain – they previously used to route, via the Madrid hub, to get to their homes in the sun.” 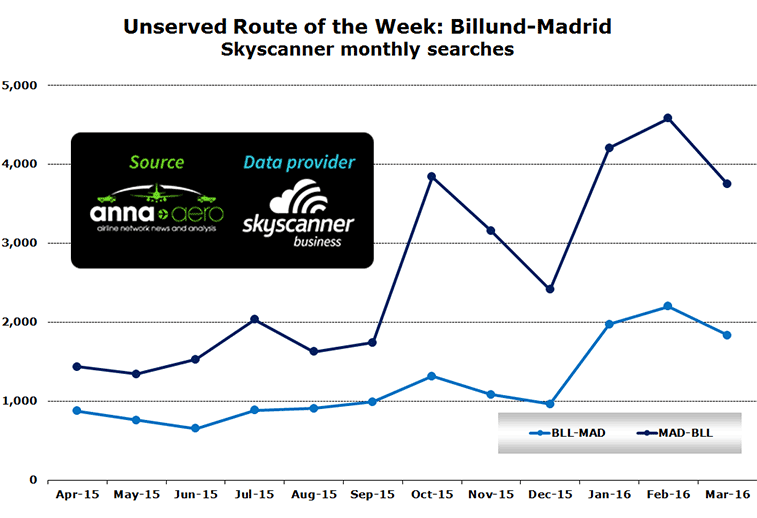 anna.aero recommends Iberia or Ryanair for this unserved route

There is significantly more traffic originating from the Spanish end of this route ‒ a 69/31 split, presumably because Billund hosts the original Legoland theme park, visited annually by some two million families and fans. The route looks like an obvious option for Iberia (or Iberia Express), which is the #1 airline at Madrid with a 44% share in terms of weekly seats and from where it operates services to 119 destinations (according to OAG schedules data for the week commencing 28 June). However, Iberia does not presently feature in the top-five airlines between Spain and Denmark, (Norwegian, SAS, Ryanair, Vueling and Primera Air hold these positions), flying just a daily service from Madrid to Copenhagen. But if it did operate the route, the IAG airline would be able to leverage significant connections at its biggest hub (especially to Latin America) which could be of great interest to Lego’s 4,000 headquarters staff in Billund who need to reach its factory in Mexico, one of its main global manufacturing sites, and currently undergoing a near-$1 billion investment.

Madrid’s second largest carrier (with a 15% seat share) Air Europa, is unlikely to be interested in Billund as it currently only offers a weekly flight between Madrid and Copenhagen. Perhaps the potential route is more likely to be picked-up by the #3 carrier (11% share), Ryanair, which currently offers a network of 39 destinations from the Madrid, including its own daily service to Copenhagen. Significantly it would also mark a return to the route which it previously served between November 2006 and October 2008.

Considering the Danish end of the route, Billund’s largest carrier (21% share) is also Ryanair, which flies to seven destinations from Billund this summer, including three in Spain – Malaga, Alicante and Girona. Billund’s #2 airline (12%), Primera Air, is also a possible operator on the city pair as it is already one of the biggest carriers between the two countries. The airline’s 16-destination network from Billund includes four Spanish cities – Palma de Mallorca, Malaga, Almeria and Menorca. While Primera Air used to focus on the charter market, it is increasingly diversifying its business model towards becoming a quasi-LCC operation, so this type of city break/business destination may well fit into these planned changes.

The seasonality of demand is curious. When looking at the previous year of search data, the busiest month for potential traffic flows (for both directions on the route combined) is February 2016 with nearly 7,000 searches, close to 5,000 higher than the lowest monthly figure, which was recorded in May 2015 (2,100). Why are so many Spaniards apparently wanting to go to Legoland in February? We have no idea. The seasonality profile of this search data is also more extreme than last week’s Unserved Route of the Week (Malta to St. Petersburg), with the low-month traffic representing 31% of the highest month. According to OAG Traffic Analyser, because there is no direct service, the top three connecting options chosen by those passengers who did book travel between Billund to Madrid in the last 12 months were Amsterdam (37%), Brussels (27%) and Frankfurt (21%) – Copenhagen doesn’t feature despite the fact that SAS has a dedicated feeder service. Altogether 18 different airports were used by passengers desperate to fly between the two cities.

An O&D that is not served by a non-stop flight will typically display a low purchase rate and low traffic. In this instance Skyscanner’s Travel Insight indicates a monthly average of just 3.1% for the Billund to Madrid route (see graph below). Therefore, if there was a Billund to Madrid route, and if bookings performed in line with the “Skyscanner market average” for direct services at both airports (8.9%), the airline operating this route could immediately expect an improved purchase rate of 187% without any increased marketing spend. However, with nearly 46,000 annual searches, the potential city pair should already be very sustainable. 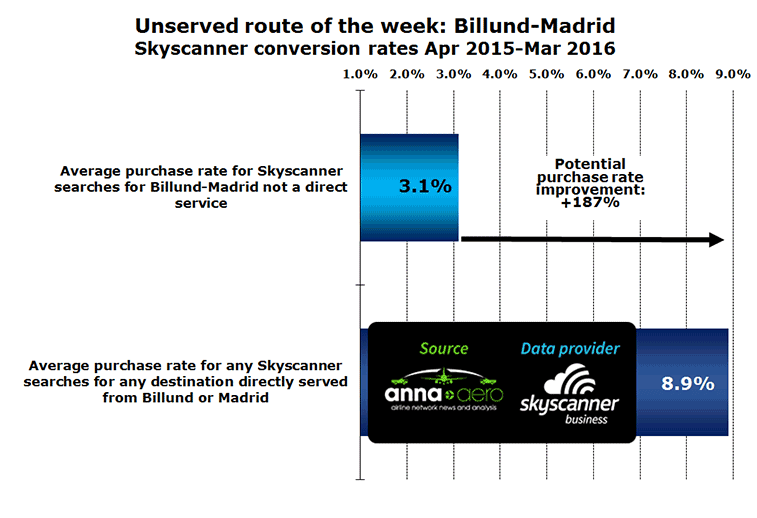