Anker in Athens: 300+ ACI EUROPE audience learns exactly how much low costs now dominate – and what they are doing next 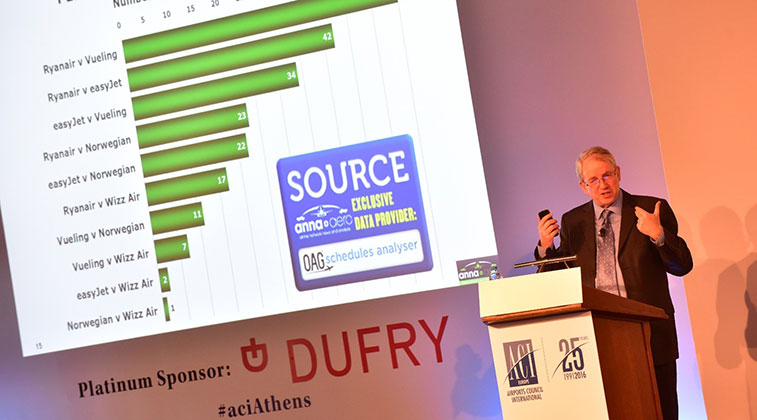 anna.aero’s Chief Analyst Ralph Anker explains the (r)evolution of LCCs at major European airports since 2006 when ACI EUROPE met in Athens last week. Anker also defined the next key trend to look out for: How the Pan-European LOw-COst carriers (nicknamed the PELOCO5) are increasingly competing with each other on routes across Europe.

At the ACI EUROPE Annual Congress in Athens, 20-22 June 2016, anna.aero’s Chief Analyst Ralph Anker explained to the 300+ audience of European airport bosses just how much Europe’s Low-Cost Carriers (LCCs) have transformed the makret in the decade spanning S06 and S16 across 29 major European airports. Here we present his exclusive findings and explanations. You won’t find anything like this anywhere else.

First off, a look at Europe’s major hubs. This comprised the FLAP airports (Frankfurt, London Heathrow, Amsterdam and Paris CDG) plus Madrid and Rome Fiumicino as the home bases of Iberia and Alitalia and Istanbul Atatürk, home to Turkish Airlines, the airline with the most non-stop routes from a single airport anywhere in the world. Three of these hubs, Amsterdam, Rome and Madrid now have LCCs accounting for more than 20% of total seat capacity during the summer period. Rome Fiumicino saw massive growth in LCCs between S13 and S15 (from 15% to almost 30%) as both Ryanair and Vueling created bases at the airport, partly in anticipation of Alitalia’s collapse. However, when this did not transpire the LCC share fell in S16 partly as a result of easyJet closing its base at the airport and moving Italian capacity to other airports in the country where there was less direct competition. 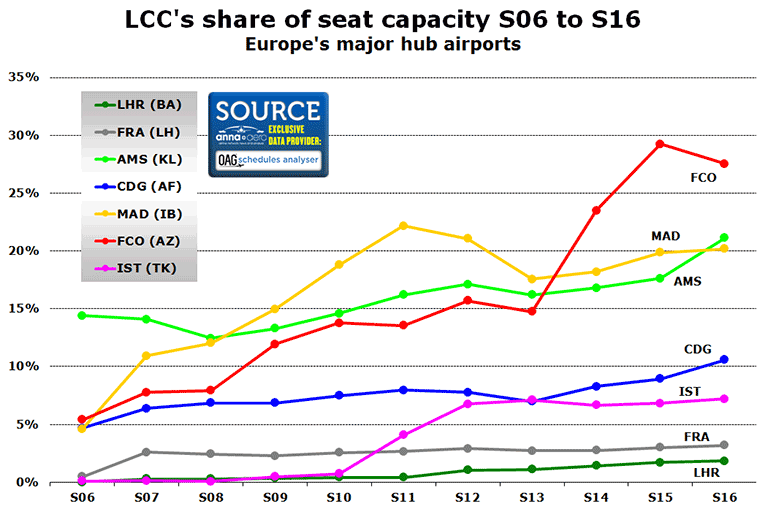 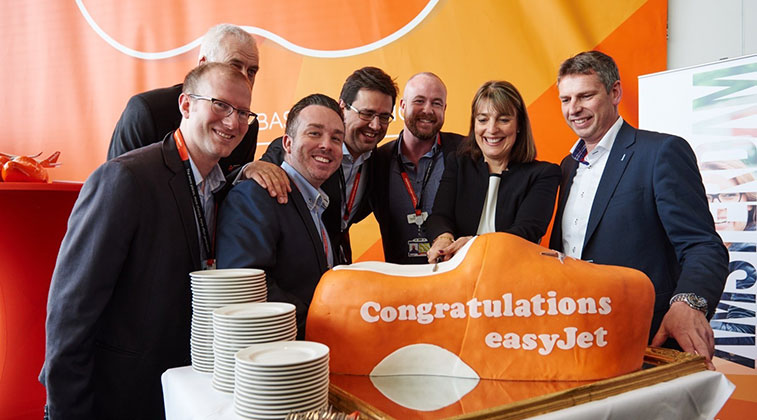 Unclogged: easyJet finally made Amsterdam a designated base at the start of the summer 2015 season, almost 19 years after it first started serving the airport.

Among a basket of other non-Nordic capital city airports, Dublin is in a league of its own. Ryanair’s home base (but not its biggest) has meant that LCCs have accounted for between 40% and 45% of seat capacity for all of the last decade. Since S13 three capital city airports, those in Athens, Brussels and Lisbon, have seen rapid growth in the share of LCC seat capacity. All three have become Ryanair bases during that period in April 2014, February 2014 and April 2014 respectively. Zurich has remained relatively free of LCCs for a variety of reasons, with easyJet operating just three routes and Norwegian, Ryanair and Wizz Air all not present at the airport. However, Vueling has gradually been growing its presence at the airport and now serves 12 destinations from the Swiss facility. 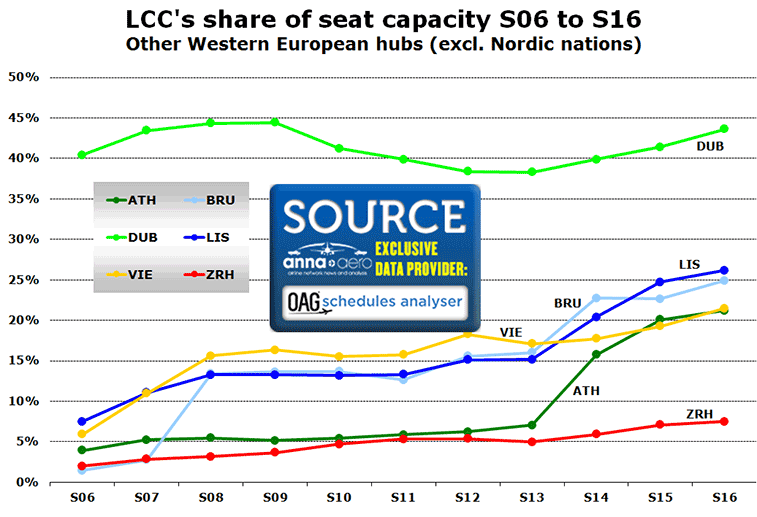 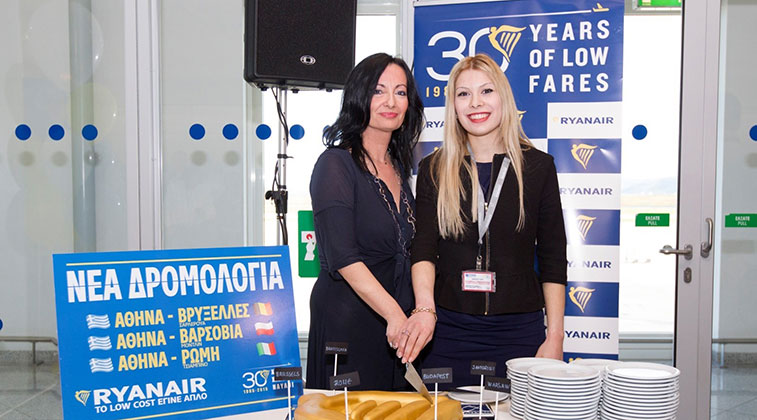 Ryanair only began serving Athens in April 2014 but this summer it will operate almost 200 weekly departures across 19 routes from the Greek capital.

Among Nordic hubs the rapid growth of Norwegian obviously gave Oslo Gardermoen a lead in terms of LCC market share. However, since S10 Copenhagen and Stockholm Arlanda have been gaining slowly. Despite abandoning its base there, Ryanair is growing rapidly in Copenhagen with LCCs now accounting for almost one-third of summer seat capacity. Helsinki has been a tough nut to crack for LCCs with various home-grown efforts having failed over the years, but Norwegian now has a stable presence at the airport. However, the LCC share of capacity at the Finnish capital is still around half that at any of the other Nordic hubs. 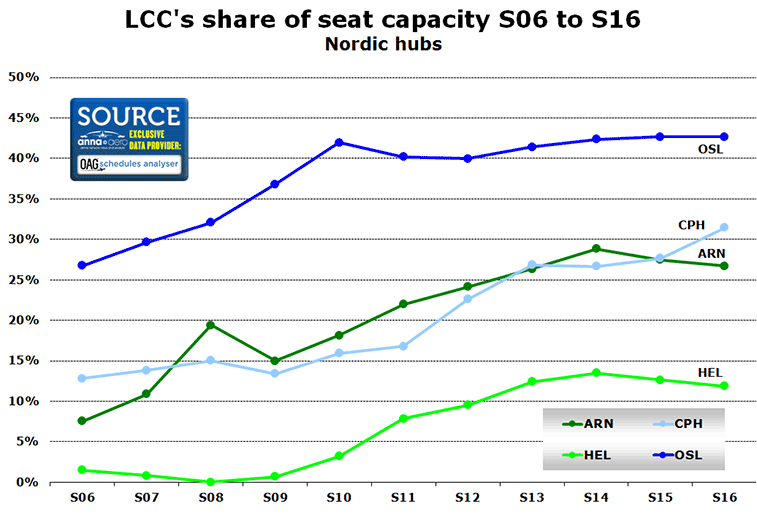 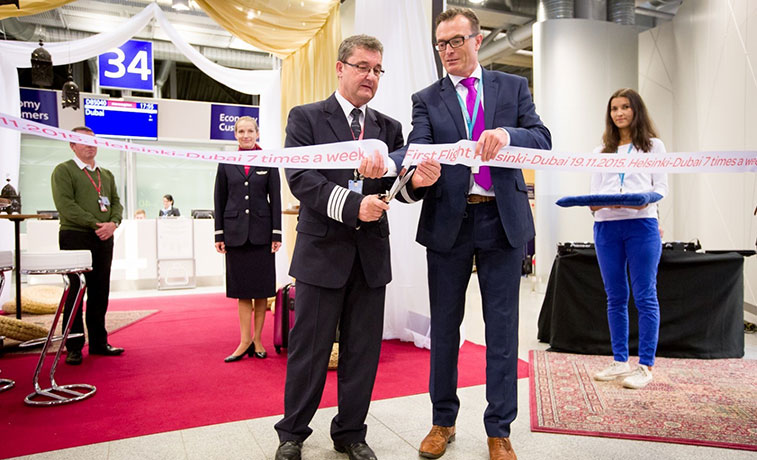 Helsinki is relatively underserved by LCCs although Norwegian’s base now offers non-stop flights to over 30 destinations, including seasonal (winter) flights to Dubai, which launched on 19 November 2015.

The demise of Malev in early 2012 resulted in Ryanair entering the Budapest market, joining fellow ULCC Wizz Air. Along with other carriers it meant that the Hungarian capital saw the LCC share of capacity jump from just over 20% in S11 to over 50% in S12. Since then it has continued to grow and is now at almost 60%. In S11 the main airport in Bucharest had less than 10% of its capacity operated by LCCs. When the city’s second airport was closed to scheduled flights in early 2012, the likes of Blue Air and Wizz Air had no choice but to move to the bigger airport. They have now been joined by Ryanair, and as a result this summer LCCs have almost 50% of the Bucharest market. The relatively low share and somewhat erratic development with regard to LCCs at Warsaw Chopin can partly be explained by the opening of a second airport, Warsaw Modlin, which initially attracted both Ryanair and Wizz Air, before Wizz Air opted to return to the main airport. easyJet does not serve Warsaw while Vueling operates just a single route. Norwegian, however, does operate a handful of routes at the Polish airport. 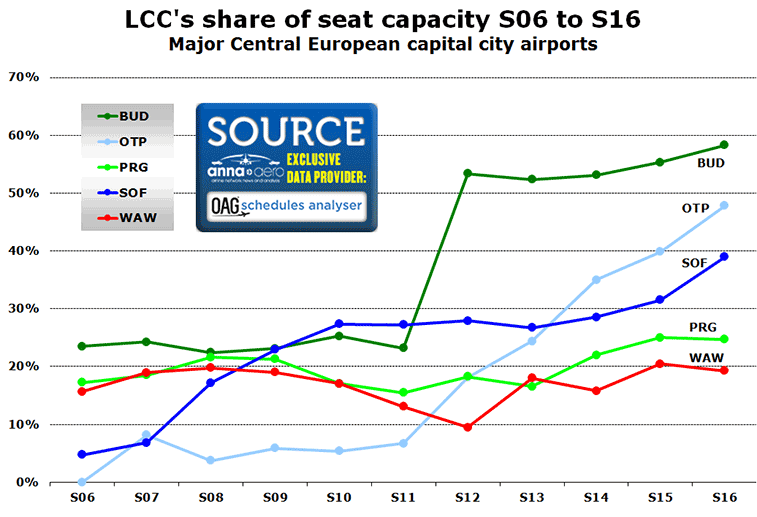 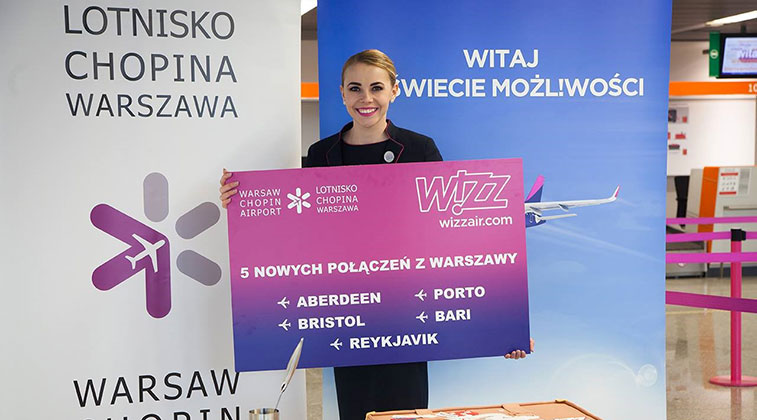 Wizz Air’s network from Warsaw Chopin continues to grow with five new routes launched this summer, bringing the total to 35. That’s twice as many destinations as the airline offered from the Polish capital just three years ago.

Six of the seven airports in this selection had LCCs accounting for less than 20% of their capacity in S06. This summer, six of the seven all have LCCs responsible for at least 30% of their capacity. For both Barcelona and London Gatwick the figure is between 60% and 70%. With Lufthansa replacing its own services at Düsseldorf with those of its in-house LCC germanwings/Eurowings, that airport has seen rapid LCC growth. Belin Tegel by comparison has not, with nearby Berlin Schönefeld the battleground for LCCs with easyJet having been established there since 2004 and Ryanair making it a major base last October. As and when the new Berlin airport opens it will likely be dominated by LCCs. 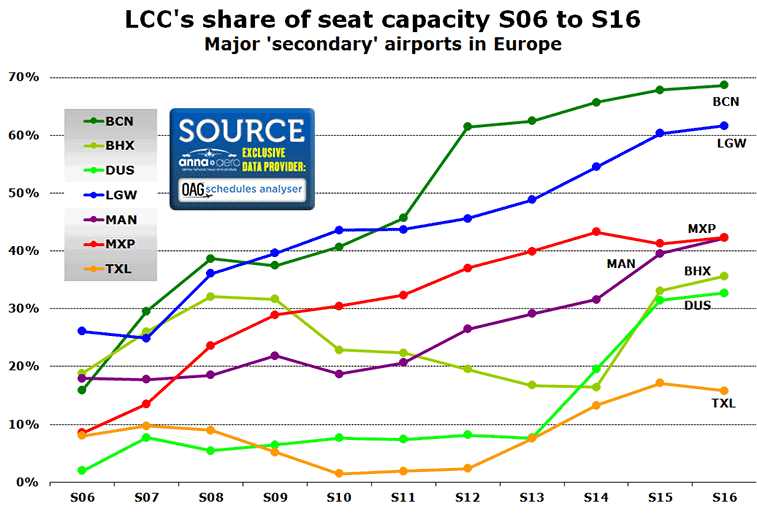 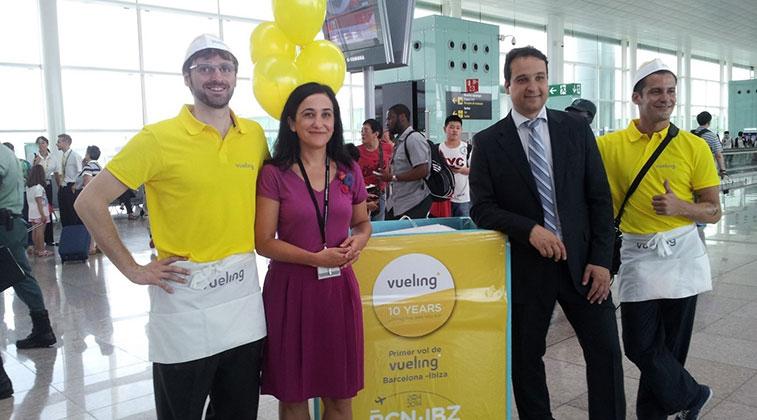 Vueling, part of the IAG group, which includes British Airways, Iberia and Aer Lingus, celebrated its 10th birthday at Barcelona in 2014 when it served 121 destinations non-stop from the airport. This summer that number has risen to 147. That’s over 100 more than Ryanair serves from the Catalonian airport.

LCCs now have 60% of seats across non-hub airports in Italy, Spain and UK

While individual airports can see significant changes in a relatively short period, what about major countries? If we look at the FIGUS countries (France, Italy, Germany, UK and Spain), the five biggest, fully liberalised markets in Europe, but take out the main hub airports of the national flag-carriers, what are the trends? The UK, which for many years led the way for LCCs, has now been overtaken by Spain and Italy, although it’s all quite close. In all three countries LCCs now account for almost 60% of seat capacity during the summer season. France and Germany are lagging behind somewhat, but Germany has seen LCCs increase their share from under 30% to over 45% in just four years. Even in France, LCCs have doubled their share of seat capacity outside of the two main Paris hubs from under 20% to over 40%. 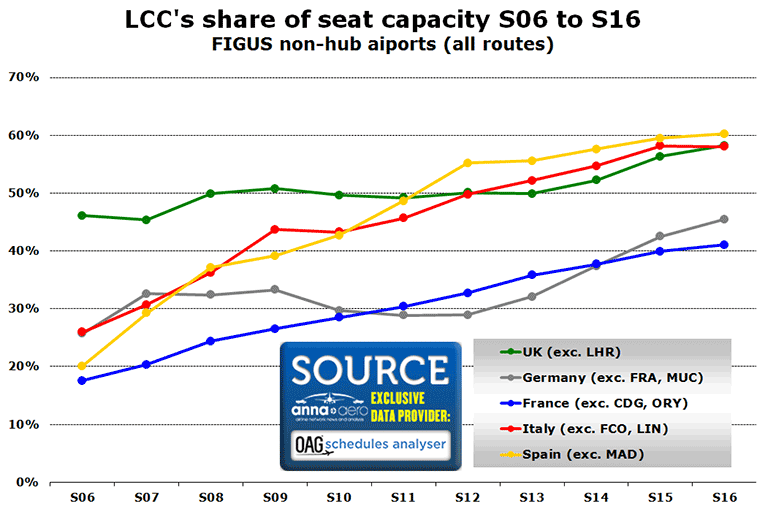 The last graph still includes domestic services from the regional airports to the main hubs, which are often dominated by the national airlines. So if we just focus on international routes what do we see? The following graph has the same y-axis scale (from 0% to 70%) as the previous graph (for ease of comparison) and the difference is clear to see. As might be expected all the lines are now higher up, showing that LCCs have an even bigger share of seat capacity on international routes from the non-hub airports. Even Germany has reached the 50% mark thanks primarily to growth by Eurowings and Ryanair. For all five country markets LCCs are now responsible for between 50% and 65% of seat capacity at the non-hub airports. However, apart from in Germany, LCCs have made little further inroads in S16 compared with S15, maybe suggesting that 70% could be some kind of natural upper limit to LCC penetration across the country’s non-hub airports. Time will tell. 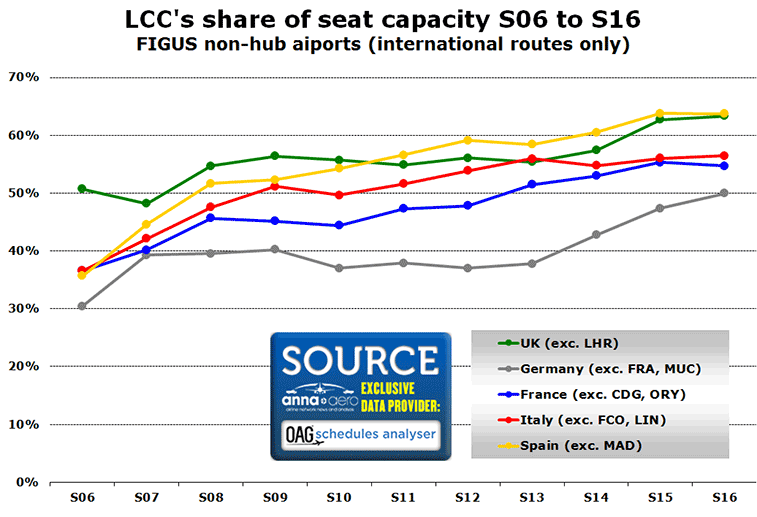 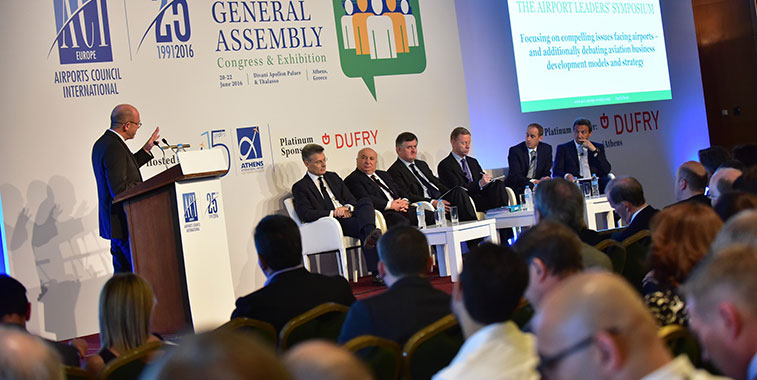