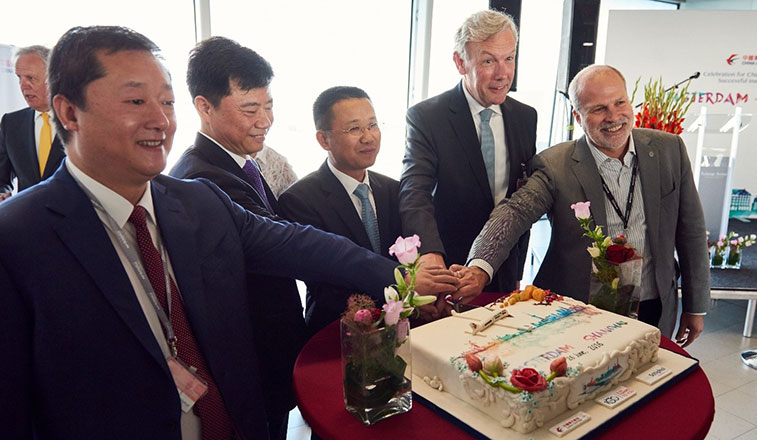 There are currently 78 scheduled routes between Europe and China in S16, up from 64 in the previous summer. During the past 12 months, services have commenced on the following unique sectors between the two markets. China will of course play host for World Routes in 2016, when Chengdu welcomes the world’s network planners in September.

Another new route which has opened up between the two markets is Madrid to Shanghai. Opened on 28 June, what is interesting about this route is that both China Eastern Airlines and Iberia commenced service on the same day. The Spanish national carrier, a member of oneworld, will operate the 10,624-kilometre sector thrice-weekly, while the Chinese airline, a member of SkyTeam, will have four weekly flights. There have been two routes dropped between the two markets over the last year, one being a 5,816-kilometre link from Moscow Vnukovo to Beijing, a route lost as a result of Transaero Airlines suspending all services. According to OAG Schedules Analyser data, non-stop service between Wenzhou and Rome Fiumicino ended on 13 February, one month after it was inaugurated, with service now being offered one-stop via Shanghai Pudong.

With these unique route launches, it has meant that four European airports have gained Chinese route status, with Baku (launching 3 July), Manchester, Prague and London Gatwick all gaining flights to China. With the exception of Manchester, the other three airports have gained links to more than one Chinese city either non-stop or one-stop, with Prague being the only airport to develop connections with two carriers.

Seat capacity up 13% between two markets

During the past 12 months, seat capacity between Europe and China has grown 13%. The existing route which has experienced the biggest growth in that time has been between Pudong and Amsterdam, with seat capacity between the two airports up 35%, helped by the introduction of China Eastern Airlines’ service on the route last week. This now makes the Netherlands – China city pair the seventh largest route between the two countries. 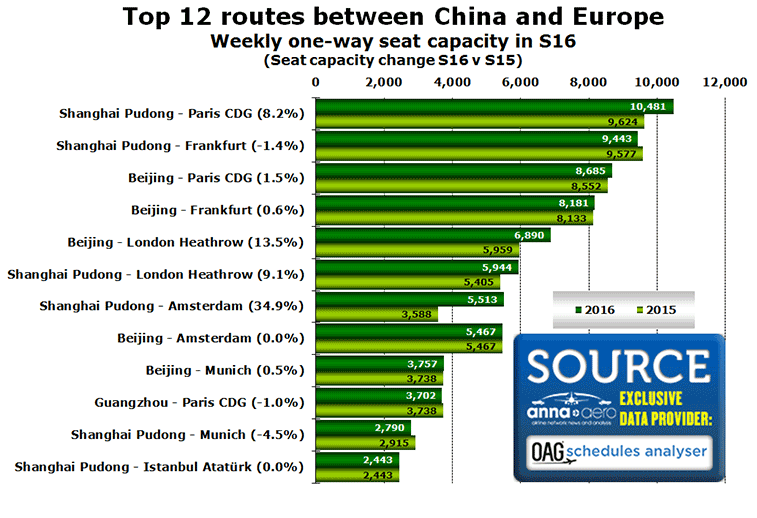 Paris – Shanghai is number one route

After a growth in seat capacity of 8.2% over the last year, the connection between Paris CDG and Pudong remains the largest airport pair in the market, and coincidentally the first route to reach over 10,000 weekly seats. The route is currently served by three carriers, Air France (52% of weekly seats), China Eastern (37%) and China Southern Airlines (11%). Of the top 12 routes, three have seen a decrease in traffic, with capacity between Pudong and Munich seeing the biggest cut at 4.5%.

An analysis of the top 12 unserved markets between Europe and China last year (shown below) indicates that they were flown one-stop by just over 600,000 passengers. Of those routes, the number one unserved direct city pair is between Barcelona and Shanghai. Looking at OAG Traffic Analyser data, over 80,000 people flew between the two cities in 2015, with Moscow Sheremetyevo, Dubai and Paris CDG being the top three connection points. Currently Barcelona does not have a direct route to China, with its only Far East destination being Singapore. Of the top 12 unserved routes, nine of them connect to Shanghai Pudong. As well as Sheremetyevo and Paris CDG, Pudong currently has non-stop service to Amsterdam, Copenhagen, Frankfurt, Helsinki, Istanbul Atatürk, London Heathrow, Madrid, Milan Malpensa, Munich, Prague, Rome Fiumicino, St. Petersburg, Vienna and Zurich in Europe. 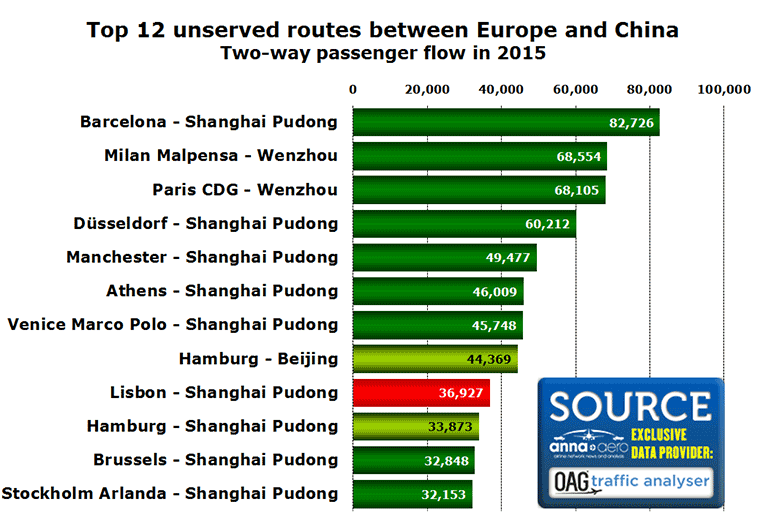 The only European airport to feature twice in the top 12 unserved routes table is Hamburg (highlighted in light green), with data showing that Beijing and Shanghai are strong opportunities for the German city. In relation to the German airport’s long-haul market, it is only connected to three points outside of Europe – Dubai, New York Newark and Tehran. Another interesting observation is that Lisbon to Pudong features in the top 12 (highlighted in red). What makes this route interesting is that Lisbon is the only European capital city in the top 12 that does not have a direct link to China. It should be noted that a route which also appeared on the list was Wenzhou to Fiumicino, however with it having being served during the past year it has not been included in this analysis.

International migration from Wenzhou has expanded massively over the past 30 years, with data showing that between 1979 and 2004, the amount of people with Wenzhou origins living overseas had grown by 900%, with nearly 450,000 people from the Chinese city now living overseas. In 2010, a collaborative analysis by CESNUR (Centre for Studies on New Religions) and University of Turin highlighted that most of the Chinese living in Italy originate from Zhejiang Province – Wenzhou is an industrial and port city in the region. With this information, it comes of no surprise to learn that the second most unserved route between Europe and China is from Milan to the Chinese city. Approximately 68,000 people travelled between Milan and Wenzhou in 2015, with Shanghai Pudong, Hong Kong and Beijing being the three biggest connection points. Wenzhou’s only direct service to Europe was flown earlier this year between the city and Rome, however schedules data shows that it no longer operates directly, but via Pudong.

Paris CDG is the best connected airport to China, with it having 89 weekly flights to seven destinations in the Asian nation – Beijing, Chengdu, Guangzhou, Kunming, Pudong, Wuhan and Xi’an. anna.aero was fortunate enough to attend the inaugural ceremony of the French capital’s last Chinese connection, when Air China launched service from Chengdu, with the Star Alliance member also serving Beijing and Pudong from the French capital. Although it is the second best connected airport in regards to weekly seats, Sheremetyevo is better connected than Paris CDG in regards to destinations served, with it having service to a total of eight Chinese cities. 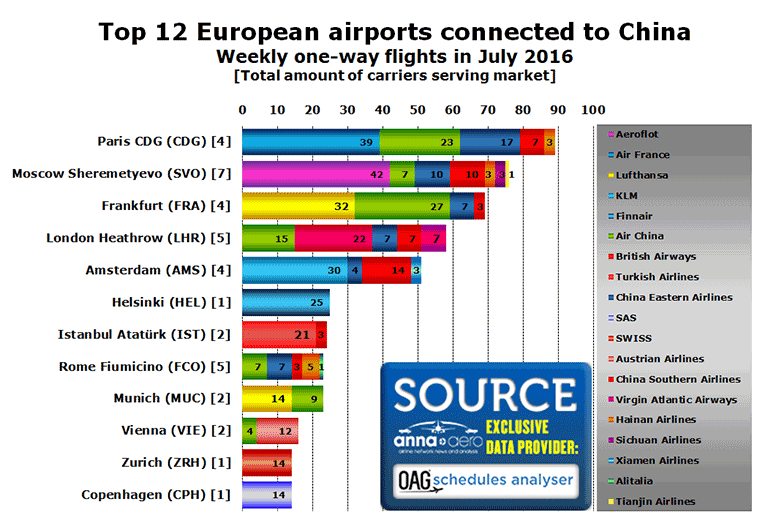 A total of 24 airlines operate between Europe and China, with 19 of the 24 serving the top 12 airports in Europe in relation to weekly seats. Just three airports in the top 12, namely Helsinki, Zurich and Copenhagen, are connected to China only by a European carrier, with all of them still waiting for the arrival of their first Chinese airline. However, It should be noted that Beijing Capital Airlines operates some charter flights into Copenhagen. Air China is the largest carrier operating between the two markets, with it having 21% of all seats in the market. The second largest carrier is Lufthansa (10%), followed by China Eastern (9.1%) and China Southern (8.6%). The smallest airline in the market is Alitalia, with it occupying just 0.2% of seat capacity on its weekly service to Beijing from Fiumicino. The newest carrier to the market is Tianjin Airlines which launched service to Sheremetyevo and Gatwick last month. 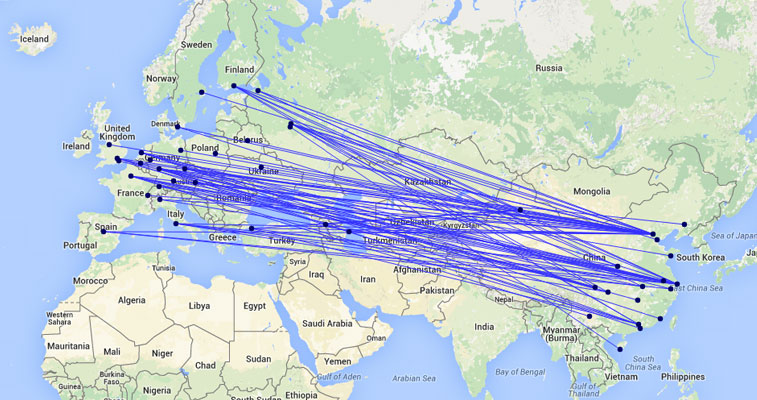 A total of 78 routes will connect Europe to China this summer, a net increase of 14 routes compared to S15. 24 airlines currently link the two markets together. The next route launch between the two markets is on 3 July when Baku will be connected to Guangzhou via Urumqi by China Southern Airlines.