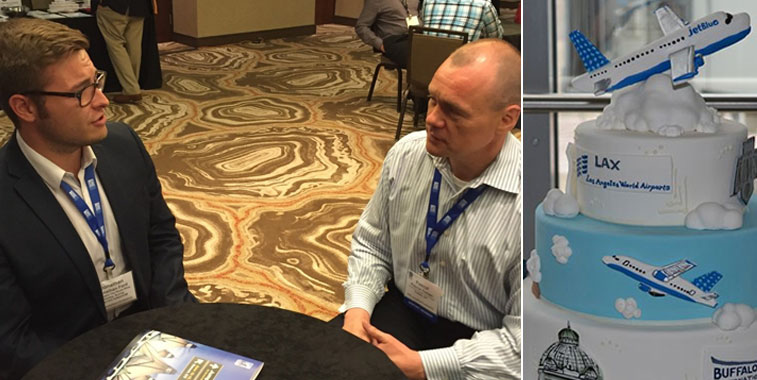 Last month at JumpStart in Denver, anna.aero Assistant Editor Jonathan Ford, met up with Buffalo Airport Senior Marketing Manager & Aviation Business Development Pascal Cohen. One of the key topics of their discussion was JetBlue Airways’ new service to Los Angeles which launched on 16 June, with the New York State airport celebrating with this cake. The route went on to win anna.aero’s prestigious Route of the Week title.

Buffalo Niagara International Airport is situated in the west of New York state. The airport recently filled a key gap in its route network, a service to the US West Coast. JetBlue Airways launched a daily service between the airport and Los Angeles, a route which gained the prestigious anna.aero Route of the Week title. Commenting on the arrival of the route to anna.aero’s Assistant Editor Jonathan Ford, Pascal Cohen, Senior Marketing Manager & Aviation Business Development, Buffalo Airport, said: “Looking at California, it is the most populated state in the US. New York is the most populated city, in regards to population density, while Texas and Florida are also highly-populated states. Florida and New York are well covered, and we now have that Californian connection. Our next US domestic goal is gaining a Texas link.”

Since January 2011 (until May 2016), 26,696,253 passengers have passed through Buffalo. The busiest month in that time period was August 2012 when over 520,000 passengers flew from the New York state airport. Although this was the busiest month for Buffalo, only 15 of the past 53 months (between January 2012 and May 2016) have witnessed a growth in traffic (highlighted in light green). The best month for growth in the time period analysed was last November, when traffic grew 5.5%. The worst performing month was January 2015, when traffic slumped 15.8% when compared to the same month in the year previous. 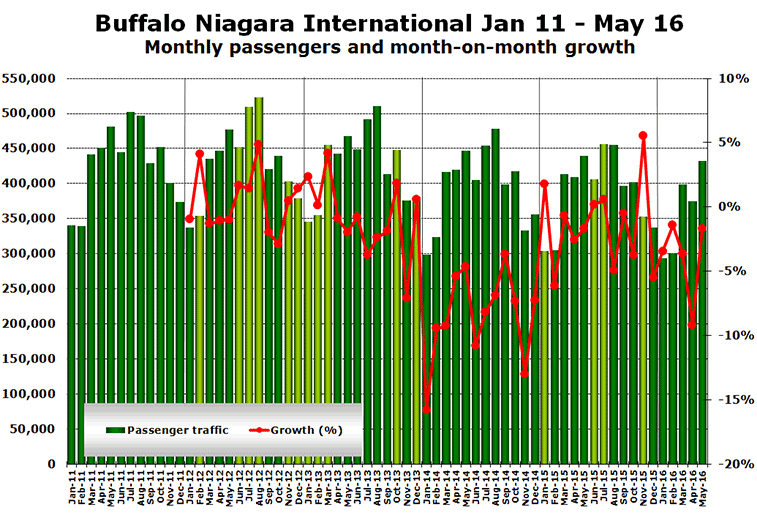 Buffalo Airport’s traffic has took a big hit during the past few years, with 2015 passenger traffic being down 10% when compared to that of 2011. However, it would appear that the decrease in traffic is continuing, with the average monthly decease in traffic for 2016 (3.9%) being 2.1% worse than in 2015 (1.8%), based on traffic data between January and May.

One of the main factors attributing to Buffalo’s decline in traffic is airline mergers. Speaking to Ford, Cohen stated: “Looking back at the past few years, the main capacity reductions have been to small/medium sized hubs. We have lost service to Cincinnati and Cleveland in recent years, with Pittsburgh being lost a while ago as well. These losses have been as a result of airline mergers, capacity cuts were much greater at these airports. On their own as O&D destinations, they would not have worked, as the demand is too small. What we did gain last year however were more services to the Caribbean and Mexico which have helped in regards to filling capacity which was lost. What we have not lost however are the strong connections to major hubs. New York remains our biggest market, with the airport having 24 daily flights into the city’s three major airports.”

Looking at OAG Schedules Analyser data, seat capacity at Buffalo has grown by 1.0% in July when compared to the same month of 2015. The airport is currently served by five airlines: Southwest Airlines, Delta Air Lines, JetBlue, American Airlines and United Airlines. Of the five carriers, Southwest – the largest carrier at the airport, has reduced its capacity by 0.8%. Second-placed airline Delta has grown its capacity by 0.5%, fourth-placed American has grown by 1.8% (including merged operations with US Airways), while fifth-placed United has shrunk its capacity by 7.2%. The best performing carrier however is JetBlue (third-placed), with it having grown its capacity from Buffalo by 9.6% when compared to last summer.

36% of passengers are Canadian; 22% of country’s nationals live within one hour of Buffalo

Cohen revealed to Ford that in 2015 36% of passengers travelling through the airport were from Canada, with Canadians choosing to travel across the border into the US to use services from Buffalo. This number has increased during the past decade, with only 26% of passengers in 2006 being from across the border. 1.9 million Canadians use Buffalo each year, with it being the largest airport in the US to see Canadian passenger leakage, with the second being Seattle-Tacoma at 700,000. Commenting on the close connection that Buffalo has with Canada in relation to trade, Cohen highlighted: “$80 billion worth of exports travels through Buffalo each year from Canada, putting our airport at the heart of great commercial and cargo opportunities. Of those exports, a great amount is in relation to the automotive industry, which is one of the biggest in the country.” Also adding to this, Cohen highlighted how more Canadians lived in its initial catchment then Americans: “The Canadian side of our catchment area has 7.5 million people, with the US having just 2.3 million. This is based on a 62-mile radius around the airport. This means that 22% of all Canadians live within a one-hour drive of Buffalo, making it a great place for carriers to take advantage of not having to pay Canadian taxes to reach this population, and give them affordable airfares that they’re after.”

One topic that was brought up by Ford was the potential of a European service. “Now that you have got that much required West Coast service, is the airport now looking to gain a connection east to Europe?” Cohen replied: “Europe by far is the most important market, especially the UK & Ireland. 40% of all European visitation to Buffalo are from the UK. It is a great market for an LCC operation, however we are seeking to gain a service with multiple carriers.” 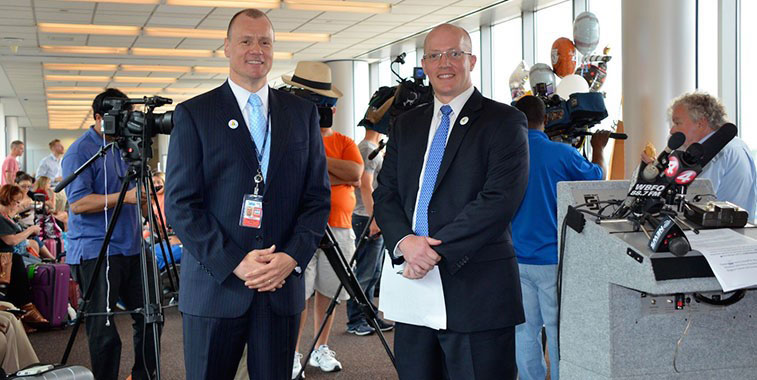 Seen at the launch of JetBlue Airways’ route to Los Angeles from Buffalo last month are Pascal Cohen, Senior Marketing Manager & Aviation Business Development, Buffalo Niagara International Airport and John Checketts, Network Planning Director, JetBlue Airways. As a result of the launch, the airline has grown its seat capacity from Buffalo by 9.6% this summer.