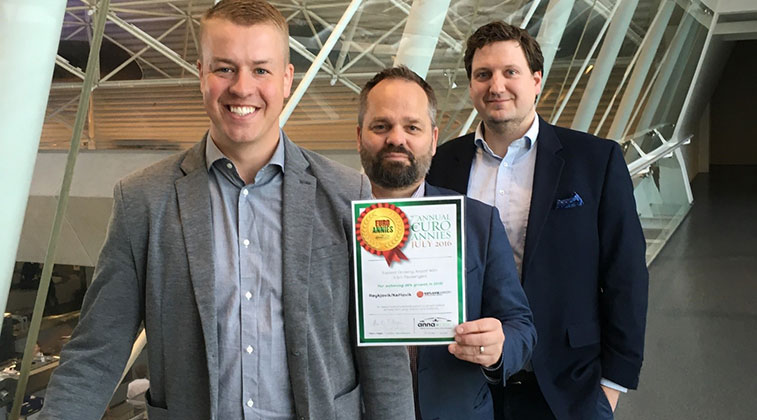 Ok, so their valiant national team might have crashed out of the Euros 5-2 to the impressive hosts France on Sunday night, but another prize worth having was just around the corner for Iceland’s biggest airport Reykjavik/Keflavik – no doubt where many of the Iceland fans have been returning from France to over the last few days. Seen here celebrating the win in the 3-5 million category for annual growth (+26%) are the airport’s: Gretar Mar Gardarsson, Project Manager Business & Route Development; Hlynur Sigurdsson, Commercial Director; and Gudmundur Dadi Runarsson, Technical and Infrastructure Director.

A little bit earlier in the year than in 2015 (anna.aero’s data elves are off on their holidays soon) we can now reveal the winners (and runners-up) in anna.aero’s seventh annual Euro ANNIES awards – Part I. Starting this week with airport winners in 10 categories, Part II will reveal the four airline winners next week. Based purely on analysis of passenger traffic data and schedule data these scientific awards are all about what the airports have actually achieved. For the airport traffic growth data we use our own database of annual (and monthly) passenger traffic data for over 350 airports across Europe. For those awards given to airports relating to their network growth we have analysed OAG schedule data for the first week of August 2016 and compared it (where appropriate) with the first week of August 2015. Strictly speaking we are not calculating the number of new airlines/routes etc, but the biggest net gain during the last 12 months, to take into account airlines and routes that may have disappeared for whatever reason.

Although we have 10 awards, with a tie in one category we therefore have 11 winners in total, and these are spread across nine countries. Spain and Poland (both with two) are the only multiple winners, with France, Iceland, Portugal, Sweden, Turkey and UK all generating the remaining winners. Other countries represented among the runners-up are airports in Bulgaria, Germany, Greece and Moldova.

So, fanfare please, and the first award goes to …

Warsaw Chopin Airport in Poland has won this award, growing by a massive 37 new routes from 87 to 124 since last August. It has actually added 41 new destinations, but its net gain was partially reduced by the loss of flights to Gran Canaria (Norwegian), Milan Linate (Alitalia), Paris Orly (Transavia) and Tenerife South (Norwegian). There are multiple runners-up in this category, all posting a net increase of 15 destinations this summer. Istanbul Atatürk grows its network from 256 to 271, Munich from 213 to 228, Thessaloniki up to 98 from 83, while Berlin Schönefeld inches towards 100 city pairs increasing from 75 to 90. 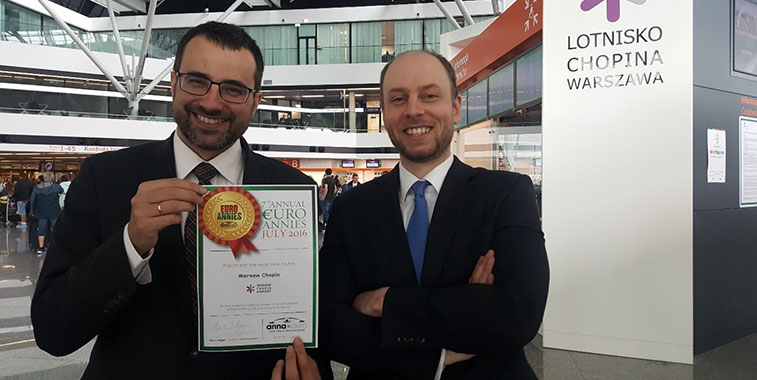 Revelling in its win as the European airport to welcome the most new routes is Warsaw Chopin. The airport has witnessed the introduction of 37 new routes during the past 12 months. Seen celebrating with the award are Przemysław Przybylski, Chopin Airport Spokesman, and Michal Gębala, Aerosales Unit Manager.

In this category, the definition of a long-haul route is a flight of over 4,500 kilometres originating from the European region. OAG data suggests that there are 74 airports in Europe with at least one route that satisfies this criteria (down from 77 in 2015). While Frankfurt (98) and Paris CDG (95) still lead the way with the most long-haul destinations served non-stop, as they did last year, the winners of the award for the biggest net increase in such routes are London Gatwick and Madrid airports – both had a net gain of 10. The two airports also both added 11 new routes, but also saw one dropped since last August. The recent arrival of Tianjin Airlines at the London airport on 25 June was a contributory factor in the UK capital city’s win, while the Spanish capital has added service to, amongst others, points like Addis Ababa, Hong Kong, Holguin, Johannesburg and Shanghai over the previous year. Last year’s winner, Istanbul Atatürk, has had to settle for sharing second place with Cologne Bonn, both of which delivered a net gain of eight long-haul destinations. The German airport has grown from one to nine city pairs over the 4,500-kilometre threshold, due to the expansion of Eurowings’ network. 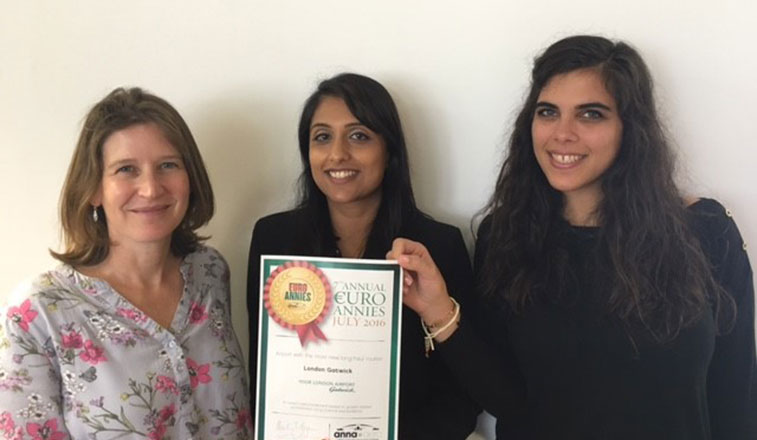 London Gatwick, the world’s busiest single runway airport, is rapidly expanding its long-haul network (defined as those routes that are at least 4,500-kilometres long), adding a net gain of 10 routes since last August, up from 26 to 36 destinations. Proudly displaying their winner’s certificate are the team that made it possible: Jennifer Newman, Airline Account Manager; Dru Patel, Network Strategy Analyst; and Despina Kolomvou, Airline Insight Analyst. 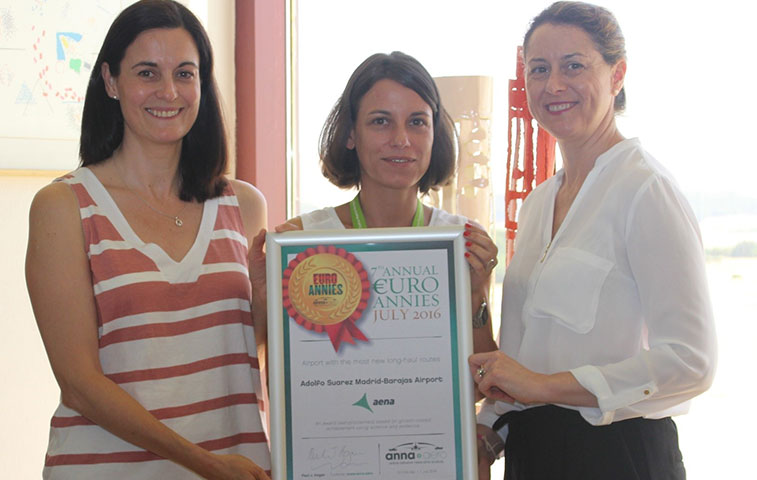 Spain’s busiest airport now has non-stop flights to 55 long-haul destinations, up from 45 a year ago. Diana Gracia and Laura López from the airport’s marketing team and Elena Mayoral, Airport Director look happy to have received the award on behalf of airport operator Aena.

The 5.1% growth in annual traffic to the Spanish airport last year has helped Alicante Airport win the award for the biggest net increase in airlines, with 10. The airport will welcome 11 new airlines this summer, including Aeroflot, Bulgaria Air, KLM, Lufthansa, Norwegian, SWISS and TAROM. Like many airports across Europe, it did however lose Transaero Airlines from its roll call of carriers in the last 12 months. There were four runners-up from four different countries in this category, with Bourgas (Bulgaria), Chania (Greece), Faro (Portugal) and Nice (France) sharing the spoils. Last year’s second-placed airport, Billund in Denmark, could only muster a net increase of two airlines in the last 12 months, with the arrival of British Airways and Finnair being notable additions to its tailfin collection. 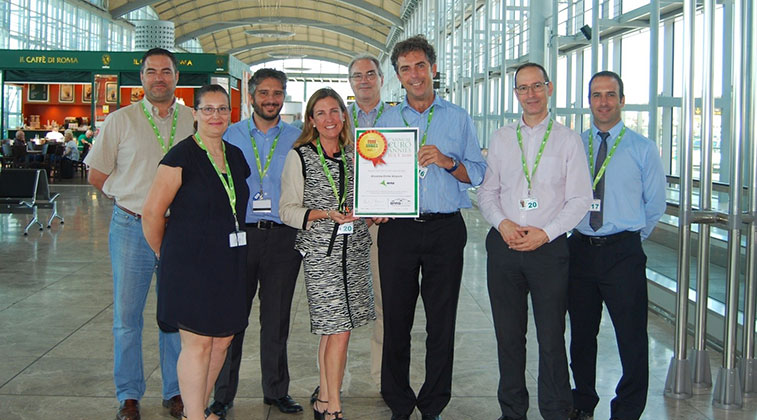 Having grabbed the title from Rome Fiumicino two years ago, Paris CDG has again retained this award with a total of 108 scheduled airlines this August (same number as in 2015), well clear of second-placed Frankfurt with 88 (down from 94) and Amsterdam with 85 (up from 82). The Dutch hub, which usurped London Heathrow (still in fifth with 80 airlines, down from 81) to take fourth spot last year, has improved its position again this year, jumping ahead of Rome Fiumicino this time, which lost one carrier over the last 12 months (down from 85 to 84). Paris CDG coped with the loss of 11 carriers during the last 12 months (such as Estonian Air, Georgian Airways, Malaysia Airlines, US Airways and Yemenia Yemen Airways), but also welcomed 11 new airlines, including Armenia Airways (3 June from Yerevan), Norwegian (which launches New York JFK on 29 July), SkyWork Airlines (6 June from Bern) and Ural Airlines (24 March from Ekaterinburg).

Thanks to anna.aero’s comprehensive, free, downloadable database of airport traffic statistics which includes well over 350 airports across Europe, we have been able to reveal the fastest-growing airports in 2015 in pure passenger terms in six different size categories. Interestingly, the six winners for actual passenger growth (traffic) in 2015 come from six different countries. The award in the biggest category (>10 million passengers) sees Istanbul Sabiha Gökçen forced into second place by Pobeda-powered Moscow Vnukovo (24% annual growth) after three years at the top. Other performances of note see Reykjavik/Keflavik improve from the second spot it attained last year to win the 3-5 million section. Despite moving up to the next group of airports, Warsaw Modlin and Chisinau airports posted an impressive one-two in the 2-3 million classification, having taken the same positions in the smaller 1-2 million grouping 12 months ago. Turkish (with two) and Greek (with four) airports secured six of the 12 top spots in the 2015 awards, but only managed four this time around, with Turkey claiming three and Greece just one. 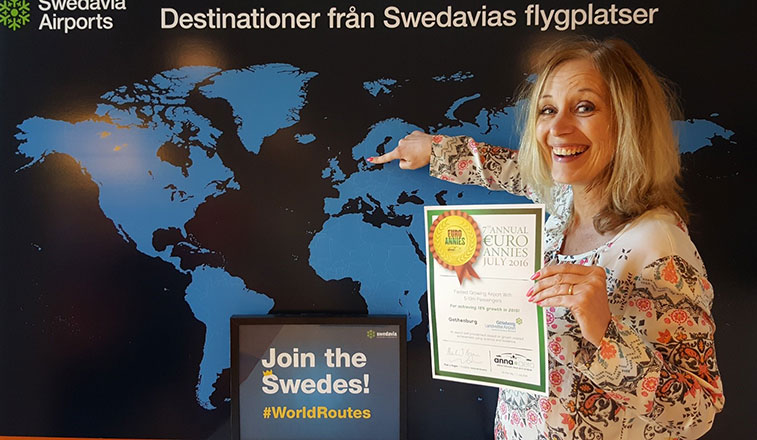 In case you didn’t know where Sweden is Swedavia’s Director Aviation Business Elizabeth Axtelius is happy to show you, along with proudly displaying Gothenburg Airport’s winner’s certificate in the 5-10 million category. The airport had 18% annual traffic growth in 2015. 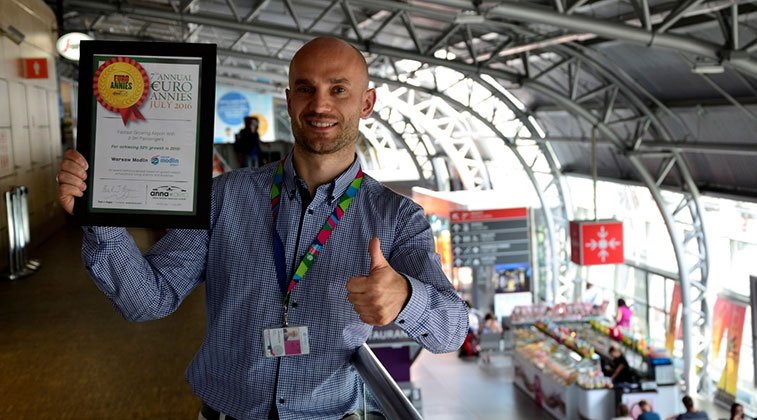 Having won the 1-2 million category last year, Warsaw Modlin Airport was not daunted by the step-up to the 2-3 million classification this year, scooping top prize again (followed Chisinau in Moldova as well). Giving the accolade the thumbs-up is Piotr Lenarczyk, Commercial Marketing Director from the Polish airport.