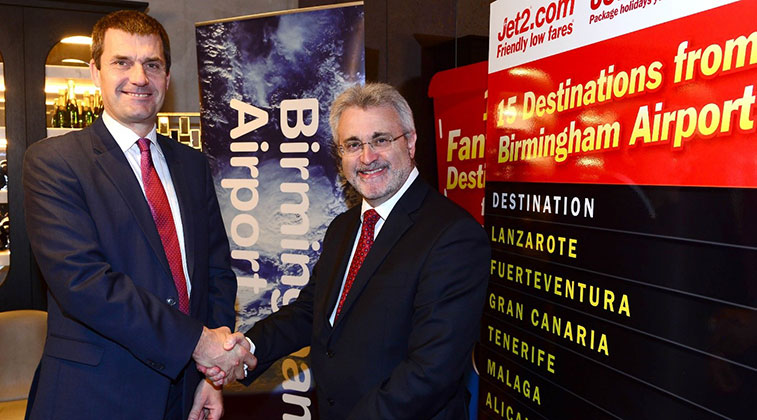 On 7 July Jet2.com announced that it will base four 737-800s at Birmingham, with it becoming the carrier’s eighth UK base after Leeds Bradford, Manchester, Newcastle, Glasgow, Belfast International, Edinburgh and East Midlands. The following routes, providing the UK airport with nearly 600,000 additional seats, will be served from Birmingham from the start of S17:

Looking at OAG Schedules Analyser data for next summer at Birmingham, only two of the 15 announced routes, to Girona and Reus, will not face direct competition. What should also be mentioned is that Ryanair, the third largest carrier at Birmingham in terms of weekly seats (behind fellow based carriers Flybe and Monarch Airlines), has not yet released its S17 schedule. This summer Ryanair operates from Birmingham to Faro, Malaga, Alicante, Lanzarote, Palma de Mallorca, Tenerife South, Gran Canaria, Fuerteventura and Ibiza, so it is most likely that these routes will continue next summer, adding further direct competition with Jet2.com. The most competitive route, with six serving carriers is Tenerife South, with a combined 24 weekly frequencies available from the S16 incumbents – Monarch, Thomas Cook Airlines, Thomas Airways, Ryanair, Norwegian and Vueling. It should be noted that Jet2.com will increase its weekly frequency to Faro, Alicante, Malaga, Palma de Mallorca, Ibiza, Mahon and Reus later into the S17 season from Birmingham.

Doubtfire has done his homework

Speaking to Ian Doubtfire, Business Development Director at Jet2.com and Jet2holidays on the day of the launch, anna.aero’s Editor Marc Watkins asked him about the decision to move into such a crowded market. “We’re starting destinations from Birmingham where we have a strong holiday product, with great hotels and support services on the ground, so it makes perfect sense for us.” Although introducing a four-aircraft base represents a huge slug of capacity for Birmingham, Doubtfire feels like there are other opportunities to be had. “This is just the start for us at Birmingham. First we have to sort out the W17/18 programme, but we will be certainly expanding here in the future.”

Commenting on the launch of Jet2.com services from Birmingham, the airport’s CEO Paul Kehoe said: “It’s great news that today we welcome Jet2.com and Jet2holidays as partners of Birmingham Airport. This new addition to the family here at Birmingham Airport means new jobs in our region and even more choice for travellers, with 15 routes to popular and affordable sun destinations. This friendly leisure airline is in response to customer demand offering great value deals to some of the most popular sunshine routes on a fleet of brand new 737-800 aircraft.”

Just 62 kilometres north-east of Jet2.com’s newest base is East Midlands, the LCC’s fourth biggest base in terms of weekly seats (operations at Palma de Mallorca are bigger, but it is not a base) – behind Manchester, Leeds Bradford and Newcastle. Looking at the airline’s schedules for S16, all of the Birmingham routes, with one exception (Girona), are currently served by Jet2.com at East Midlands, suggesting further serious market overlap. But again, Doutbfire is unfazed. “East Midlands is a well-established base [it opened five years ago], with a loyal Jet2.com following. However, we have been drawing passengers from Birmingham’s catchment for some time with lots of local travel agents asking us to start flights from there.”

While it is still early days in terms of S17 schedules, with many airlines posting a far from refined programme this far out, it may yet be telling whether the overlap between Birmingham and East Midlands may force the airline to pair back its operation from the latter. Referring to the table above, which looks at Jet2.com’s East Midlands schedule for next May based on the routes announced from Birmingham today, five of its routes – Faro, Malaga, Alicante, Palma de Mallorca and Ibiza – are currently indicating a reduced weekly frequency, with seven offering the same as S16, and one, to Fuerteventura, showing an increase in weekly frequency. Notably the one route which wasn’t available this summer from East Midlands – Girona – has been added for S17.

anna.aero’s Watkins’ final question to Doubtfire concerned where is next for the LCC, as the airline tends to look at opening a new base every two-three years, perhaps even a base overseas. “Jet2.com is set-up to serve the UK market, so it’s more than likely that if we did open up another base, it would be from this country. However, I have been in this business far too long to never say never about a foreign base, but in the meantime we have lots to concentrate on here, with our new Birmingham base and growth across many of our other seven airports.” Whatever happens with Jet2.com’s expansion plans, anna.aero will be there to keep you briefed. 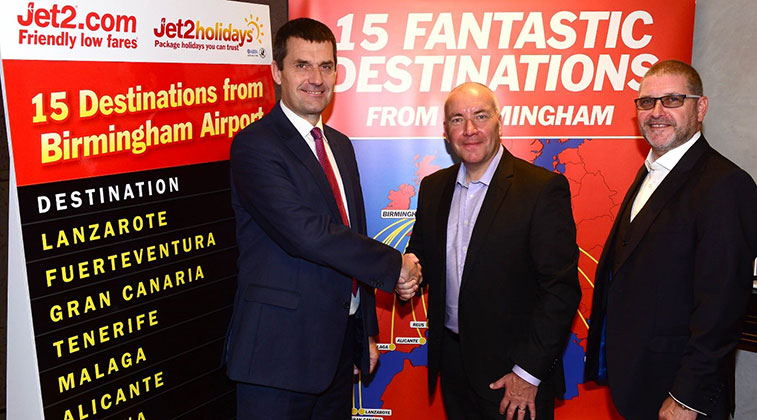 Steve Heapy, CEO of Jet2.com and Jet2holidays shakes the hand of Alistair Rowland, Group GM for Midcounties Co-operative Travel, the largest independent travel agent in Birmingham Airport’s catchment, watched over by Alan Cross, Jet2holidays’ GM of Trade. Local travel agents having been calling out for Jet2.com to open a Birmingham operation, and today they got their wish.